I’m still working on the photos I took at last week’s cat show; I took over a thousand on Sunday with my new Sony DSLT.

But in the meantime, here are a few shots from the show.

There was a lovely Somali girl at the show. Her name is Kimbelot’s Kayla of Ameusin, and she’s related to Toby, the Somali male we met last year.

Kylie was in the show, too, on Saturday.

There were 13 cats entered in the HHP class, and Kylie made every final.

This show used recycled ribbons for the HHPs, which was fun. Each rosette was different and unique. Kylie won one that was pink and white, which was so perfect for her.

I absolutely fell in love with this handsome cream gentleman. His name is Bijouxcats Buttercream of Jamis, and he’s a spectacular European Burmese.

Tessie, an Asian. is a European Burmese with the smoke gene. She has Bijouxcats in her pedigree. And Butters is also related to Little Dewey, the kitten we met in Baltimore.

And, last but certainly not least… 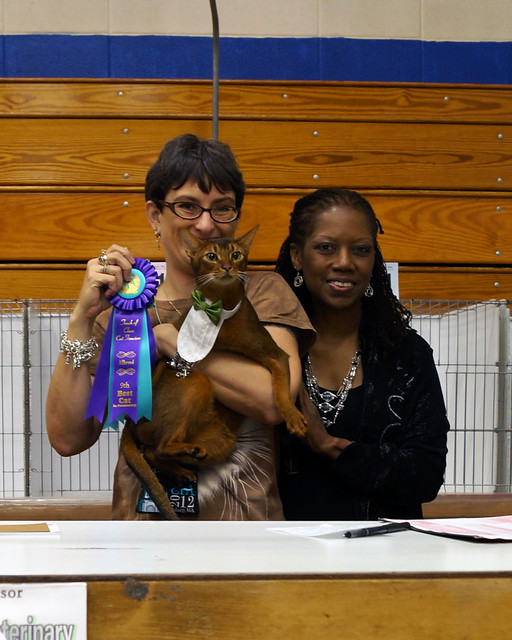 Jake and I posing with judge Kathy Calhoun and his first rosette of the day.

One thought on “Aby-a-Day – October 7: Working on last week”