Jacoby was oh-so-helpful today in the kitchen.

And he was so excited!

I opened the oven for a bit so he could see the turkey better.

It smelled really good to my human nose; I can only imagine what it must have smelled like to a cat! 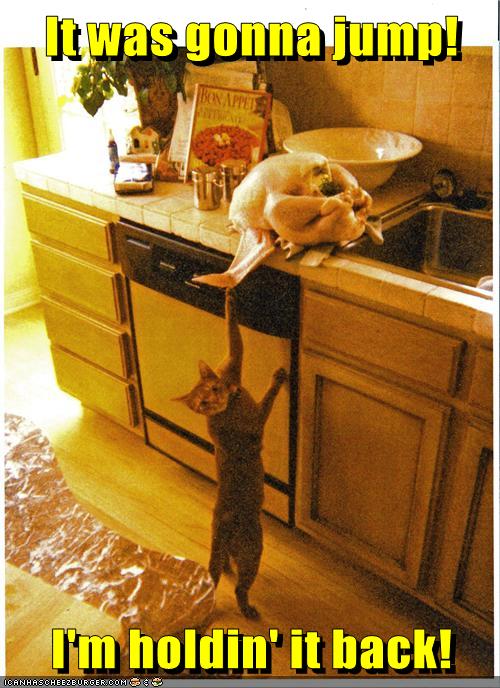 Oh, yeah, that’s an Aby all right (the body type is actually a lot like Angel’s). And it reminded me of a story I posted several years ago about an Abyssinian named Bird and a Thanksgiving Turkey:

Recently I was contacted by Marian Callison, proud owner of Birdie, an Abyssinian cat who has recently reached her 30th birthday. Below is a story that appeared in the Nevada Appeal in 2004 about Birdie.

Twenty-seven years ago, Marian Callison started what could have been a new Thanksgiving tradition when she served her family “individual turkeys” in place of a giant bird.

Instead of being browned and steaming on a platter in the middle of the table, her turkey was alone, frozen, and abandoned on the porch outside. Callison had left for work, her turkey defrosting on the counter. Upon her return, she began to stuff the bird and was scratched as she placed her hand inside the bird’s cavity. She said she thought it was odd, but guessed the bird’s breast bone had been broken and was scratching her.

Two eyes peeked back. Her year-old kitten, Bird, an avid fan of turkey, had climbed inside. “It was scary to see those little beady eyes looking back at you,” she said Monday from her Carson City home. “I tried for over an hour to get her out of that turkey. I called the Butterball hotline. I filled it full of hot water and shook it. She was so slimy I couldn’t grab her, and she had her claws dug in. “I worked for a vet and called him, and he couldn’t get her out. “I gave up and put the turkey outside on the porch. It was beyond cold.”

Callison went to the grocery store, where she bought Cornish game hens to serve, instead of her 21-pound Butterball. “Bird was shivering on the porch when I got back,” Callison said. “My son gave her a bath, and ever since then she’s liked a bath. She’s more like a dog than a cat.” Callison defrosted the game hens for dinner. “Everyone thought I was starting a new tradition,” she said.

The tradition took on a life of its own when the hosts of television show “Crook and Chase” interviewed the Butterball lady a decade ago. “She talked about this woman whose cat was stuck in the turkey,” Callison said. “We heard it again on reruns yesterday.”

Twenty-seven years later, the kitten Callison once held in her palm now weighs 16-1/2 pounds, walks on a leash, and squeaks like a bird instead of meowing.

Kelli Du Fresne is city editor for the Nevada Appeal.