Today Jacoby and I went to an event organised by the Boston Athletic Association that provided people who were at the site of the explosions on Monday – race volunteers, medical personnel, Red Cross and military people – the opportunity to gather and talk about what they experienced.

It was an amazing day.

We met in the Sheraton with several other therapy teams.

This is Batman and his human, Robin.

This is Elle and her human, Pam.

Lily the horse and her human Marsha were also there!

Finally, Jake and I got to meet her!

We also met some wonderful people. Jen was in the volunteer tent at the finish line across from the bomb sites.

Robin was another volunteer who was right there at the finish line. Both of them told me they were cat people and they were so happy that there was a cat among the therapy animals at the event (Sparkle, I thought your human would like to know). Both Jen and Robin gave me permission to share their photos with you here on my blog. We also met Jill, a nurse who had been in the main medical tent at the finish line when it happened (and who has an awesome Snowshoe kitty named Fred), a military commander who, like me, is allergic to cats but still has them, and a Red Cross volunteer from northern New York State. I didn’t get their names, though.

After the event, Jake and I walked up Hereford to Boylston and looked at the memorial that has sprung up along the police fence that’s closing off Boylston at that end of the street.

I hate that it has to be there…but it’s wonderful that it is there. Boston’s people are incredible.

Some of the things people have left are truly moving.

I left one of Jake’s cards. It’s all I really had to add to the collection of things.

There’s also a John Hancock sign that people have been writing on.

One person wrote: “YOU MESSED WITH THE WRONG CITY.” I love that.

It was hard to find a place to write anything, the sign was so full of messages.

Jake helped me find a space.

I drew a little sketch of Jake and wrote “Strollercat ❤ Boston." Silly, I know…but I didn't know what else to write.

Then we walked up Newbury Street (the next street over from Boylston) to Arlington to catch the T home. There were smaller memorials at each intersection.

This is the memorial at Newbury and Exeter, one block down from the intersection closest to the bombing site.

I’m glad we went down there today. It’s one thing to see it on TV (in fact, they're showing this very memorial on the 11:00 news as I type this right now), but it's very different to see it in person. And it's beautiful.

A couple of days ago, someone posted this amazing photo to one of the Abyssinian Facebook groups: 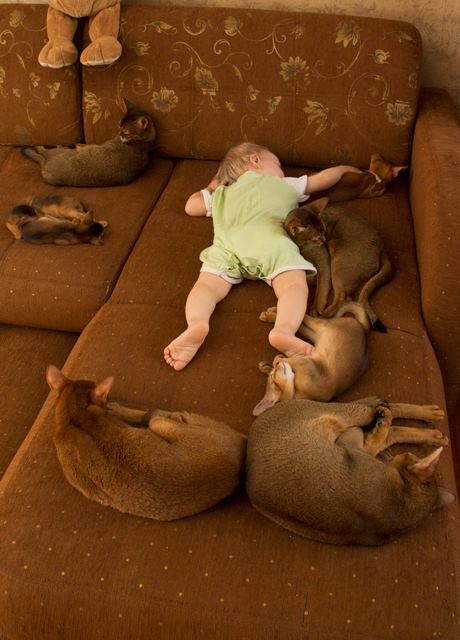 Isn’t this fabulous? I love how all the Abys, regardless of age, so thoroughly accept this baby! What a lucky little kid…and I’d just love to give this photo to all those idiots who think that they HAVE to get rid of their cat(s) just because they’re pregnant. Cats and babies are not mutually exclusive. 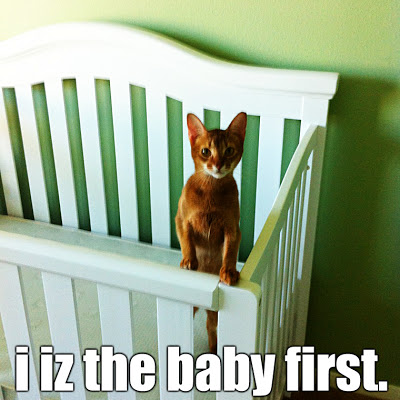 Of course, there may be an adjustment period in some families…

Fear not, though: Once baby Kennedy was born, Dexter fell in love with his little human sister:

Proof that cats and babies can co-exist!