This week’s Photo Hunt subject is “Over.”

A couple of weeks ago, Jacoby and I went for a little walk out to Rolling Bridge Park and on the way home we walked along Foundry Street.

There’s a chain link fence there at the back of a little park.

For some reason, Jake decided he felt like climbing!

I bet dog people never have this problem when they go out for walkies!

He totally would have gone up and over, too, if I hadn’t stopped him!

Okay, prepare to lose your temper…I know I kind of did when I saw this…

I know what you’re thinking: “How can such adorable Aby kittens be rage-worthy?” Well…let me show you the rest of the story: 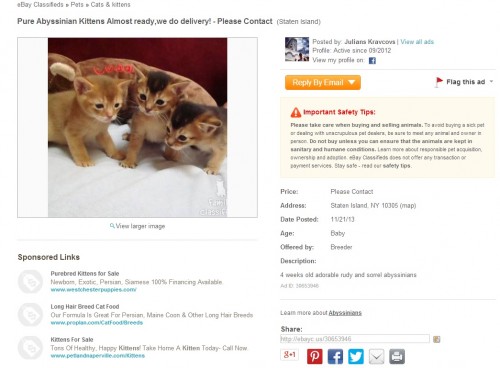 These kittens are for sale on eBay Classifieds! And the ad says they’re “almost ready to go” but they’re only four weeks old according to the ad! Aby kittens generally shouldn’t leave their mothers til they’re around three months old.

On the one hand…cute Abys for sale in Staten Island, but on the other hand…eBay? Really? That just seems like such an inappropriate venue for selling kittens in general, let alone Abyssinian kittens!