We’re moving to a new apartment in our building this month, so I’ve been taking Jacoby downstairs to our new door to get him used to it. He knows exactly which apartment is ours now, and runs to our door like a homing pigeon.

We went down the back stairs to our new unit.

Jake checked out our new door.

We have bricks on one side of our new entryway! I hope Jake learns this landmark soon…

But he did get startled by some young boys who live on our new floor.

And this is a funny story: while I was taking these photos, Jake got so rattled by the kids making noise that he bolted! He ran as fast as he could…back to where our apartment is located on our new floor. The doors in our building lock automatically when you shut them, but if people are going in and out they tend to “soft-close” them so the latch doesn’t engage. This is something I do when I take out the trash and let Jake out into the hallway because I don’t want to bother with my key. And all the cats know how to push the door open enough to get back into our apartment if they want to.

So, Jake raced back to our apartment…and, as luck would have it, the person living in that apartment just happened to have left their door open! Of all the apartments to leave their door open…it had to be the one that’s the same as ours! So Jake pushed his way in! I had to wake up the man who lived there to get Jake out of there…I felt so bad, because the guy was taking a nap and left the door open for his wife. I also wonder what Jake was thinking when he was inside the different apartment, because it didn’t look anything like ours!

I just hope Jake learns where our new door is quicky after we move. If he keeps running back into that other apartment…I am going to look like such a crazy cat lady!

Okay, so she’s not an Abyssinian. But her name is Abby. And she looks to me like a cream European Burmese, and that’s Tessie’s base breed, so…she’s sort of a relative.

Abby’s in the OC Animal Care shelter in Orange County, CA, and she’s currently being treated for an upper respiratory infection. She’s supposed to be 12 years old and she’s been in the shelter since 20 December. According to Facebook, she’s safe as of yesterday, but it never hurts to boost a signal…

I forgot to post this before the holidays, but check out this amazing gift bag that Abyfriend Kim sent me! 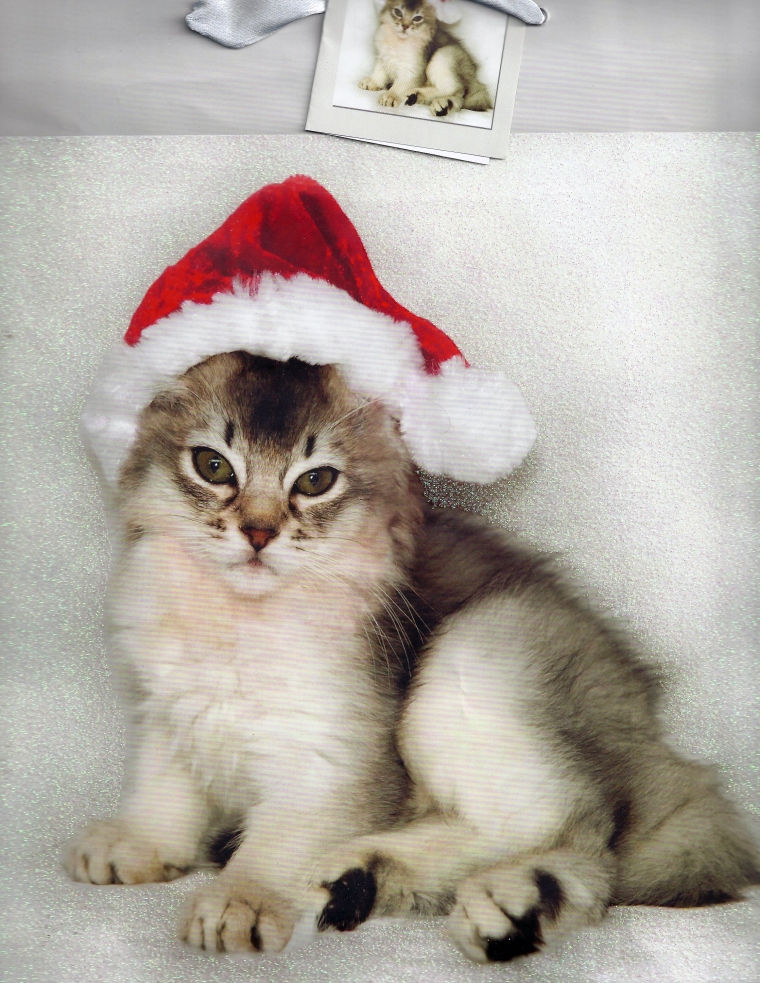 Not only does it feature a lovely black smoke Somali kitten wearing a Santa hat…but it’s sparkly, too!
Thanks, Kim!