Jacoby and I went to a CFF show with Meg yesterday in Attleboro. This was a wonderful location for a show because not only does Meg live in Attleboro, but there’s an MBTA commuter rail stop right there, too. Meg takes the train from there every day to get to work. So, we had a simple morning planned: get on the train at South Station at 6:45am, go to Attleboro, meet Meg, grab some breakfast and go to the showhall. 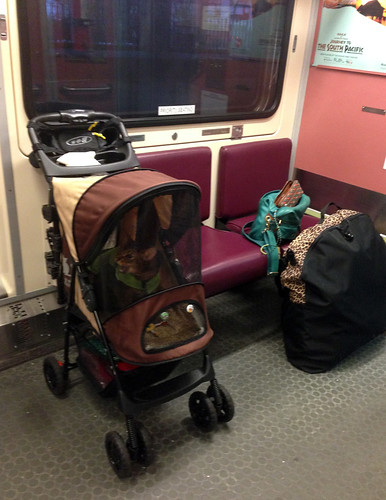 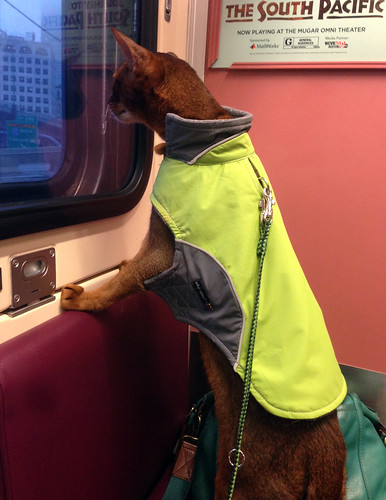 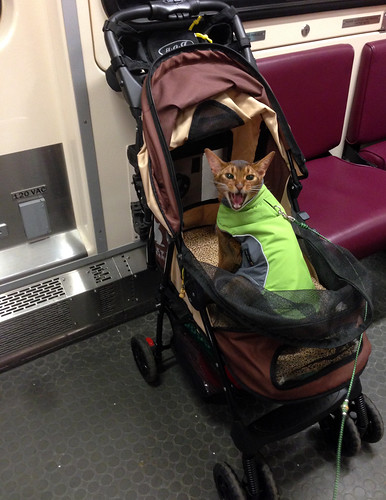 It started out simply enough. Jake was in his stroller, and we tried to get in the first car, but it was closed so we settled into the “entryway” at the front of the second car. I parked the stroller in the area where people with bicycles typically sit, because we were in a double-decker car with steps to the upper and lower seating areas. 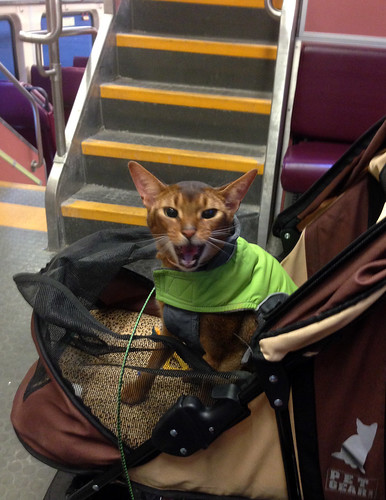 It was early and Jake is a talkative cat. He was meowing a bit, because he was excited to be going somewhere. 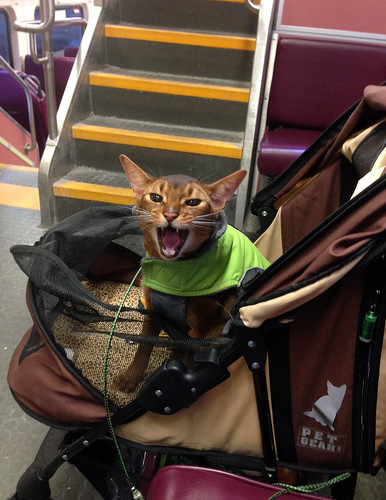 After a couple of stops, the conductor came up to me and asked, “Is there something wrong with your cat?” I looked at him and said, “No. He’s just talking.”
“Well, people have been complaining about the noise.”

Really? Most of you know what meowing sounds like. It’s not that loud, especially on a moving train…and there were about three people on the train that early on a Saturday. There were two men with bikes sitting in our area, and we had been chatting about bikes and such; they were the closest to Jake and they weren’t disturbed. I think the “complaining” was coming from the conductor himself. But I just looked contrite and said, “I’m sorry…I can’t really stop him, what can I do?”

“You’ll need to move into the first car,” the conductor said. “Okay, that’s awesome,” I said, explaining, “I actually wanted to sit in the front car because it’s where I need to get off, but it was closed.”

The conductor didn’t seem to care. All he said was, “Okay, this will be your exit door, the one on the right.” 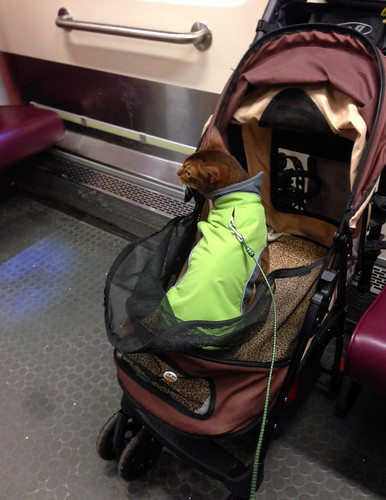 So we settled in to our new seats. It was an uneventful ride, apart from the fact that there were no station announcements, and I had to track where we were using an app on my phone. But that was not a problem and as we approached Attleboro, I closed Jake back up in his stroller, shouldered the show cage bag, and stood in the door the conductor had assigned to me.

And…nothing happened. I waited for him to come and open it. He didn’t. I called for him. Nothing. I even tried to open it myself, which didn’t work. Then, to my dismay, the train started to move!

My first reaction was to call Meg. “You are not going to fricking believe this,” I said. “You’re going to South Attleboro,” she said. “I’m on my way to meet you.”

As I was talking to her, I was lugging Jake’s stroller and the show cage bag up the steps and through the second car (the show bag kept getting stuck on the seats as the aisle was very narrow), looking for the conductor. I saw him at the other end of the car and called out, “Conductor! I needed to get off at Attleboro! You told me that was my door, but you never came to open it! I missed my stop!”

He looked at me coolly and said, “Oh. I thought you were getting off at Providence” (Providence is the end of the line, and is Zone 8).

“I gave you a Zone 7 ticket. Why would you think I was getting off at Providence?” I growled. (There are only two stops in Zone 7 on the line: Attleboro and South Attleboro. So there was not only no way I was going to Providence, but there weren’t that many options for where I was going).

“If you don’t lower your voice, I’ll have to call the police,” the conductor said. Um, what? I was using my “train voice” in order to be heard over the sound of the train, but I was far from shouting…yet.

“You told me that was my door. It was bad enough the stops weren’t announced, but you told me that you were going to let me out there and you didn’t.” I reiterated. “I had someone waiting to pick me up in Attleboro!”

“Well, you can either get off at the next stop, or you can go to Providence and wait for the train to turn around,” was all he said. No apology, nothing but an “it sucks to be you, huh” attitude.

“No, I can’t – I have to BE somewhere in Attleboro. I had a friend waiting to pick me up! Now she has to drive out of her way to get me in South Attleboro!” Oh, yeah, Meg…she was still on the phone. “Hey,” I said to her, “Yeah the guy thought I was going to Providence, can you believe that?” Meg made a comment and I responded, “YEAH, I KNOW! I gave him a 7 ticket! I have no idea why he thought I was going to Providence…wait, hold on,” I turned back to the conductor. “Which door are you going to open at South Attleboro? I just want to make sure I don’t miss THIS stop!”

“If you don’t stop harassing me, I’m going to call the police,” he said. Seriously? I actually shook my head in disbelief. “You’re going to call the police, for what? I’m not harassing you – you made me move to a different car, you told me what door I was to use to exit, and you made me miss my stop! And I’m harassing you!? What’s your name and badge number?” Now, for the record, I was angry, but calm. And when I get angry, I get very articulate. So I wasn’t swearing or calling him names. I was just trying to get him to at least acknowledge that he’d done something wrong.

“I’m not giving you anything, ma’am. I am calling the police.” Oh, now he’d done it. They HAVE to give you their badge number if you ask them for it. I turned to the phone I still hadn’t hung up. “Hey Meg, he says he’s calling the cops because I am harassing him! Yeah, I know. Oh, and he won’t tell me his name or badge number, either.”

By this time, the train was slowing down at South Attleboro, and those of us who were exiting at that stop were gathered in the vestibule. The conductor left, presumably to call the authorities on me. Not surprisingly, the other passengers had seen what had transpired and were on my side. One woman handed me her business card, telling me that if I needed someone to corroborate my story, she would stand up for me as a witness. Another man was looking out the window, and he said, “I don’t see any cop cars out there. You’re fine.” The train stoped and the conductor reappeared. We got the hell off the train, and as soon as I was on the platform, I turned around, looked the conductor in the eye, and said, “You’re going to get fired.”

Then I turned back to Meg on the phone. “Okay, he was lying. He didn’t call the cops. I’m off the train at South Attleboro.” Meg assured me she was less than 5 minutes away. Luckily, the rain had stopped, but it was still chilly. The more I thought about the situation, the angrier I got: what if I hadn’t had someone to pick me up at a different stop? What if I was going to walk to whatever it was I was going to? I take the same train with Jake to Mansfield, which is two stops before Attleboro, and when I get there I take the hotel shuttle to the Holiday Inn and the show hall – what if I had been going to Mansfield? I’d have been stranded!

So I called the MBTA Customer Concerns Line, and told the woman who was working the story as I’ve told it here. And she told me, basically, that the conductor was dead wrong on every count. We developed a theory that for some reason, he just didn’t like the fact that there was a cat on his 6:45am Saturday morning train. We did nothing to bother him beyond simply riding the train, but he relocated us and then he neglected to let us off the train (or even ask what our stop actually was). Needless to say, I filed a report, and I intend on following it up tomorrow. I also Tweeted this: 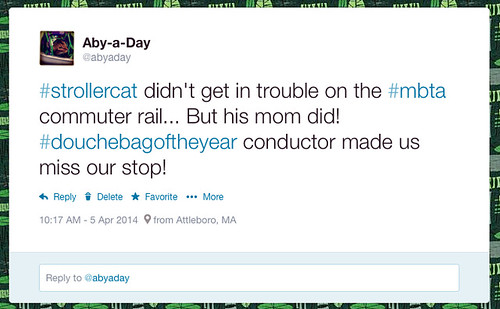 Hey, people follow that #mbta hashtag! And the #strollercat one, too. So you never know. And if you are on the MBTA, keep an eye out for an average-built, 5’8″ Hispanic man in his mid-to-late 30’s who looks a bit like Peter Lorre and has a huge chip on his shoulder. He’s probably the same conductor. 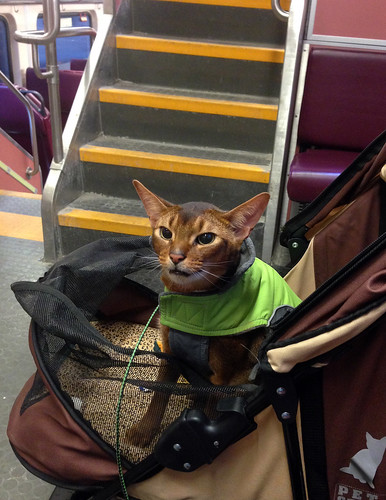 Luckily, we had plenty of time to get to the show, and we didn’t miss a thing. The remainder of the day was excellent – Jake did well, we got to see Stan, Patty and Buddy (who took Best in an Allbreed ring), and we had a great time. But it sure didn’t start out that way! 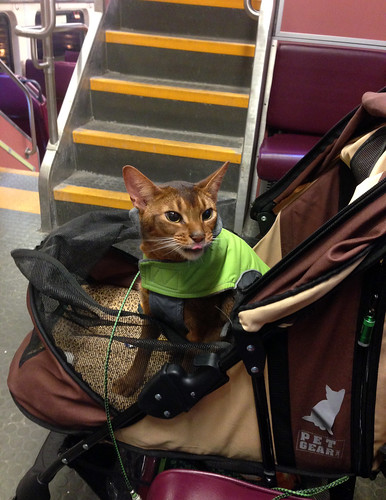 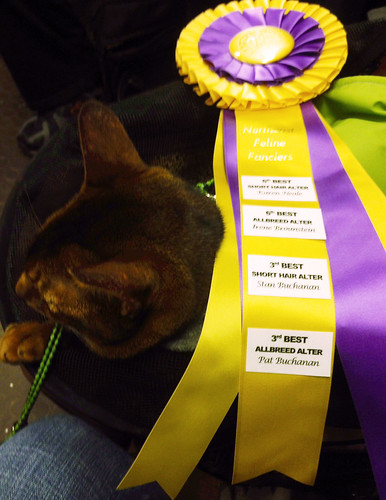 Thank goodness we had an uneventful and relaxing trip home, with a lovely and polite conductor!

15 thoughts on “Aby-a-Day – April 6: Thank you for riding the Commuter Rail…”