Originally, there were only going to be two parts to this series…but it turned out, I had so many photos of Harri, I need to break it out into two parts. So now, instead of being part two of two, this is part two of three. 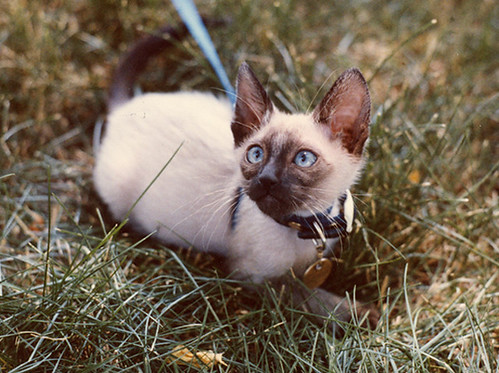 Harri (Harakka Talonväkiliäinen) was my first cat as an adult. I was 26, and finished with university and in an apartment that could support a cat. He was actually my birthday present, but I didn’t get him until 20 June. I was active in the Society for Creative Anachronism at that time, and I actually picked Harri up on the way to June Crown. He spent the weekend camping and it wasn’t until four days later that he finally got to his new home. I was actually his second person. We got him from a man who’d had him two weeks. He’d gotten Harri from the son of the breeder, who lived “in Redding…or Red Bluff. One of those” and hadn’t paid extra to get his papers. I asked why he was getting rid of him and the man told me, “Well, he cries all the time. And I have white carpets, so I can’t leave him alone in the house while I’m at work. I have to keep him in the garage. Well…duh, he’s a Siamese kitten, that’s what they do! I paid the man $100 and took “Siamy” off to the event. 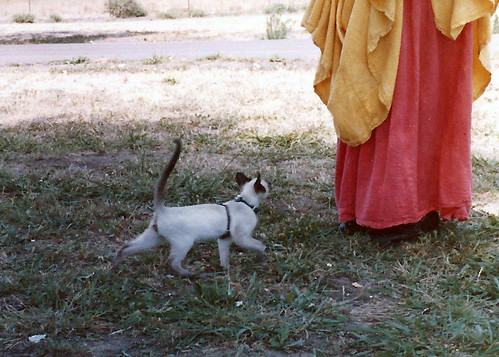 To say he loved the SCA would be an understatement. 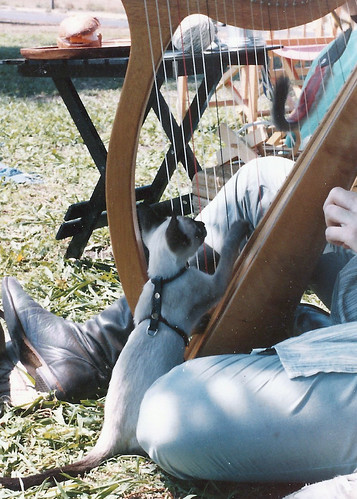 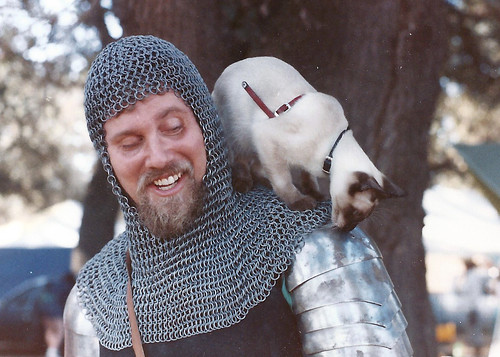 He was squired to a knight, Count Sir Brion Thornbird at his second event. Sir Brion later said that Harri was his most active squire. 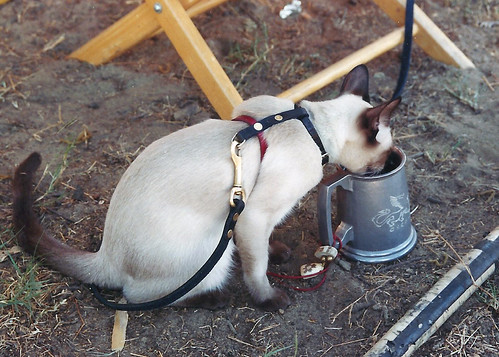 Harri fit right in, drinking from tankards (in fact, throughout Harri’s life, he wouldn’t drink water from bowls; he had to have his water in a cup. People don’t drink from bowls, so neither would he)… 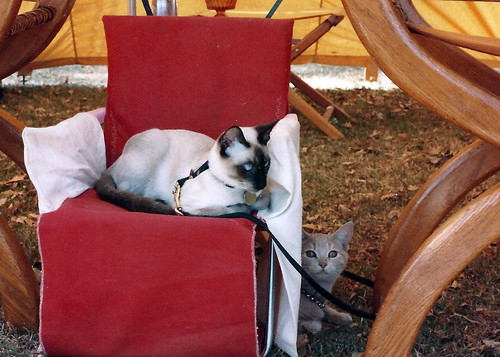 …hanging out in the Royal Pavillion impressing the ladies… 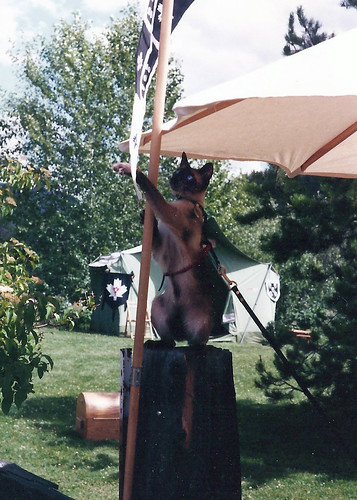 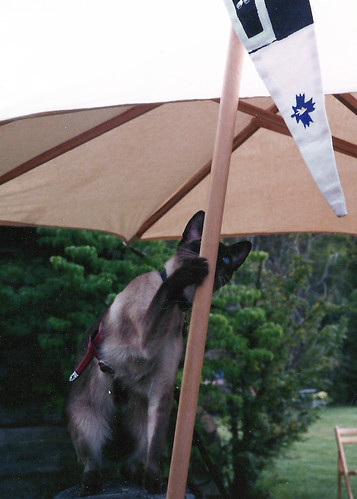 …and just generally being the mascot of the West Kingdom for a couple of years. I never left him home alone, so he went to every event that I did. 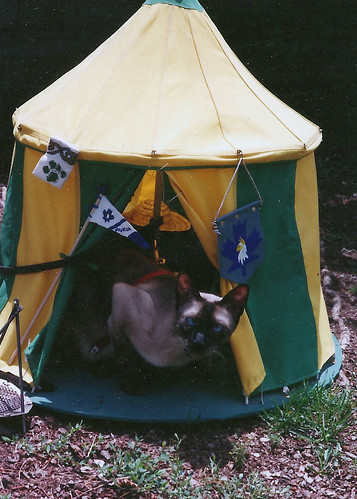 He even had his own little pavilion. 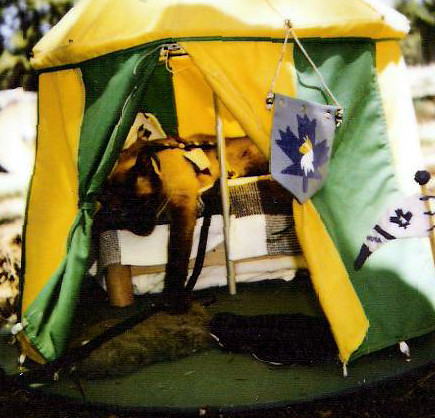 After a while, though, he outgrew it, and that style of pavilion didn’t really fit his Viking persona, so… 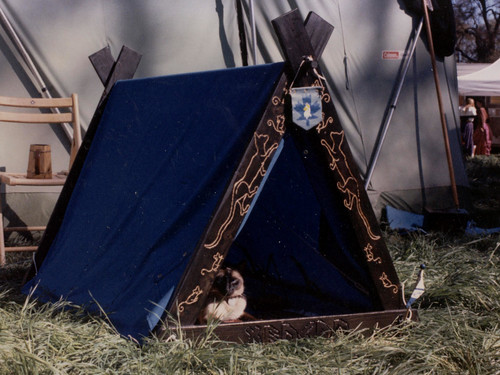 …he upgraded to a genuine Viking A-Frame. He also had a miniature rope bed with a futon mattress, a steel raised firepit, and, of course, his own heraldic banner. 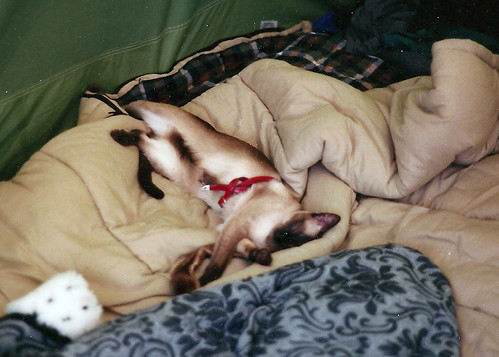 Of course, no matter what tent he himself had, he still crashed in my tent, too. 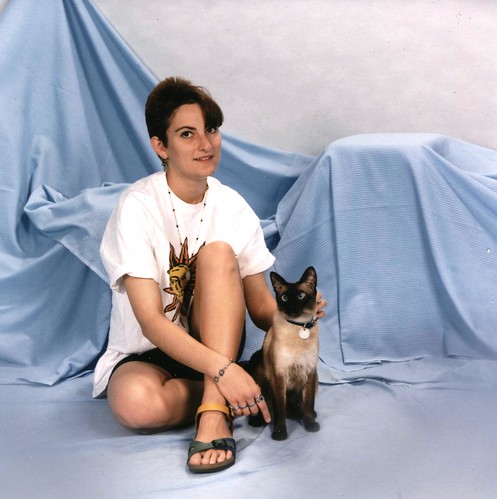 Harri was my best buddy, very much the same way Jacoby is now. 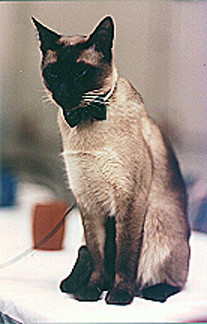 He was even “Best Cat” at my first wedding! 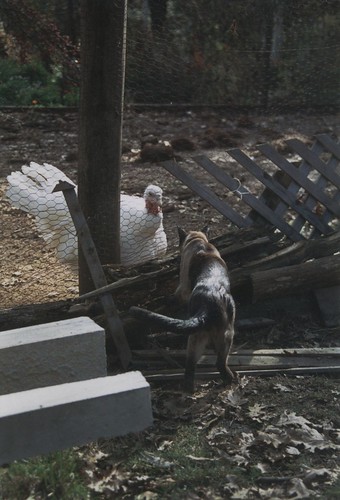 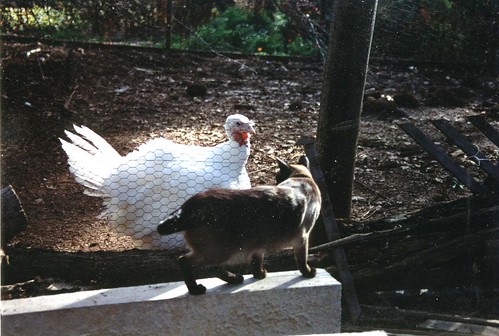 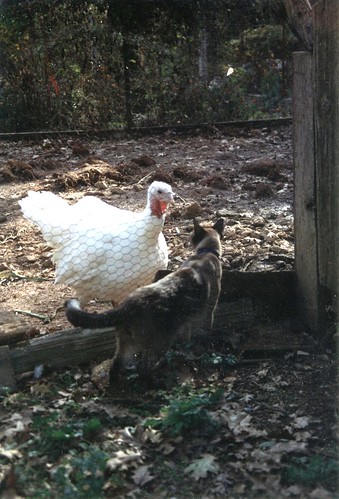 Harri was one of the bravest cats I have ever known. For some reason I never figured out, he hated dogs. He considered them the ultimate evil. He would insert himself physically between me and any dog, and he would attack if the dog came too close. We used to go for walks in Golden Gate Park, and when we’d encounter a dog, I’d tighten Harri’s leash. “Oh, don’t worry,” the dog owner would invariably say. “He likes cats!” “That’s great,” I’d respond. “HE hates dogs.” 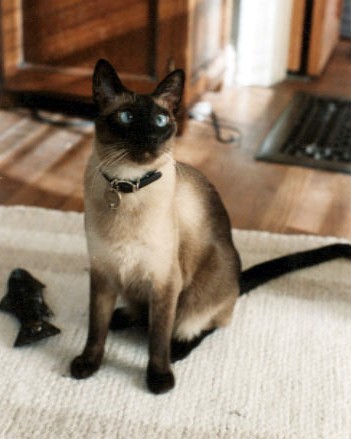 Harri was a great cat. He and Sgt. Pepper actually met once (the crossover between my childhood cats and my adult cats) and I know I have those photos, but I haven’t been able to locate them yet. He did have a lot of energy and, as an only cat, he used to stage running attacks on my ankles. This started to get a bit painful, so when he was three, I adopted a friend for him. 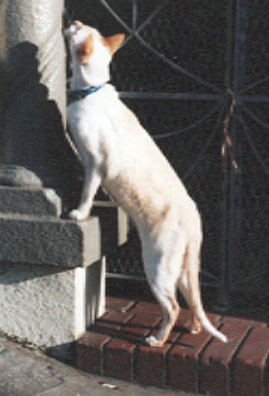 At the time, I was working for a weekly newspaper taking classified ads over the phone. I happened to take a call from a man who needed to rehome a redpoint Siamese cat because his son was suddenly allergic. We got to talking and…well, let’s just say that ad never made it into the newspaper. Sigrid was six years old, a retired CFA Grand Champion. I can’t remember the cattery name but her call name was Sugar…which I promptly changed to Sigrid. 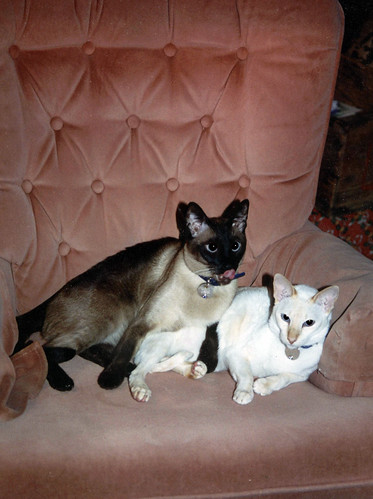 Harri loved her right from the start. She was such a wonderful, beautiful cat…and I have so few photos of her. 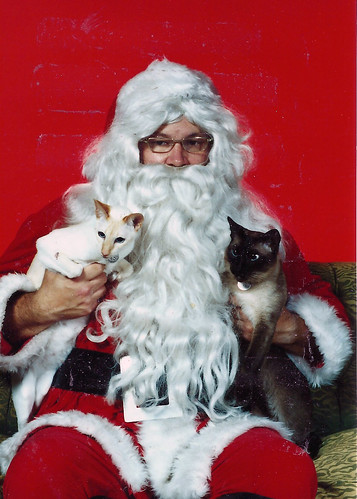 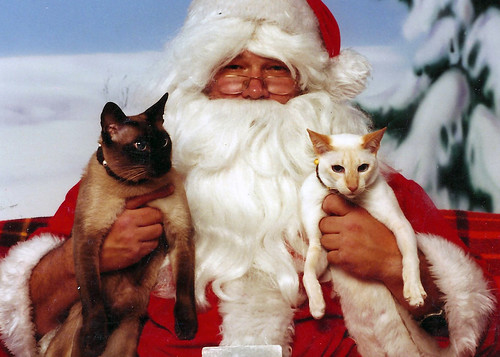 The SFSPCA would have photos with Santa every Christmas. These are some of the only photos I have left of her now.

I had Harri and Sigrid together for three years, during which time I moved from Chico to Sacramento to San Francisco. But then Harri was still an active 6 year old who weighed 12 lbs, and Sigrid was an elderly 9 year old who weighed 8 lbs. It was clear that Harri needed a more energetic pal to roughhouse with. And that’s when I adopted Patrick.

More about Harri and Patrick next week.