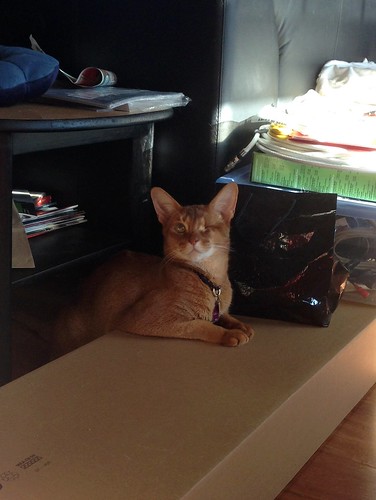 Angel’s full name is Angelrose. I thought she needed something pretty after her rough beginnings, and “Angel” didn’t seem quite enough. 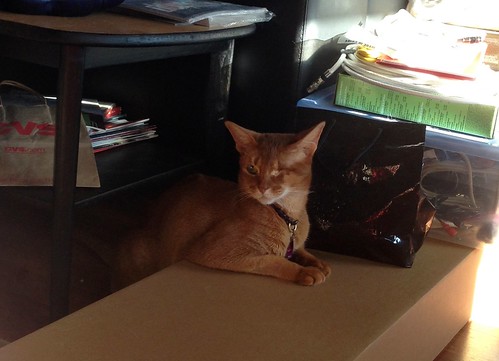 Her full name is Abytopia’s One-Eyed Angelrose of Purebreds Plus…but of course, that’s not really official. Neither is her Warrior name, Sharpeye. But what’s in a name? That which we call Angelrose by any other name would be as sweet…

I’ve been meaning to post about this for a while…

China issued a series of cat stamps in 2013, one of which features an Abyssinian!

But this isn’t just any Abyssinian. This is Flynn, who is one of Jin Fa Gu’s Abys. Jin Fa Gu is a member of the Facebook Abyssinian Cat Club, and this is the first time China has ever issued a set of “special” stamps. Can you imagine, your cat on a stamp?

You can find these on eBay for not too much money. My friend Wendy also sent me some for my birthday…I don’t really collect stamps, but I do collect these – I also have several examples of the US Abyssinian stamps that were issued in 1988.

And then, while I was Googling “Abyssinian Cat in Chinese” so I could get all fancy on the title up there, I found this…

Isn’t it exquisite? It’s by American artist Tracey Allyn Greene and is described as “An original Abyssinian cat Ahinese brush painting, by the artist, TAG, signed and stamped with my Chinese name characters and seal.” You can check out more of her cat art on her website.

Isn’t it funny how Google finds things like this for me?