Indulge me a little fan art, here…This week’s cartoon was inspired by the most recent book in the Warriors series about ThunderClan’s new leader: Bramblestar’s Storm. If you haven’t yet discovered the Warriors series, and you’re a cat person (which you must be, if you’re reading my blog), then you really should! They’re epic novels, full of thrilling adventures, mystical prophecies, noble quests, riveting battles, wartime intrigue and forbidden romances…all involving feral cats. Kittypets, cats who are taken care of by humans, are generally shunned, but in this book, the feral cats join up with three kittypets who were abandoned when their homes flooded. One of these cats, Jessy, is described as a “brave, bold, sparkling kittypet” with dark brown fur and amber/golden eyes. She’s sarcastic, quick-witted, great at jumping and climbing, and easily adapts to life with the feral cats’ clan. She can only be an Abyssinian…what other type of cat could she be? This cartoon is just a little scene between Jessy and ThunderClan’s new leader, Bramblestar, who have instant chemistry. 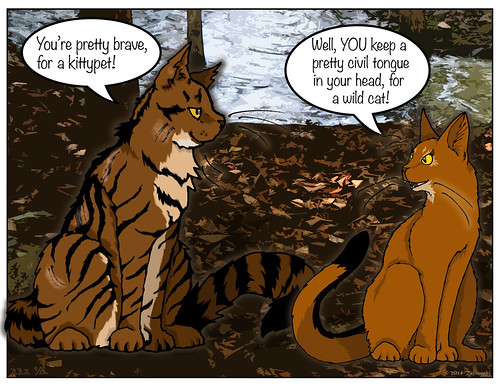 I’ve actually asked the author (via her Facebook page) if Jessy really is an Aby, but I’ve not heard back yet.

The background is based on a photo by Aaron Knox under a Creative Commons license.