Here is the fifth and final page of the illustrated retelling of Jacoby’s escalator accident. 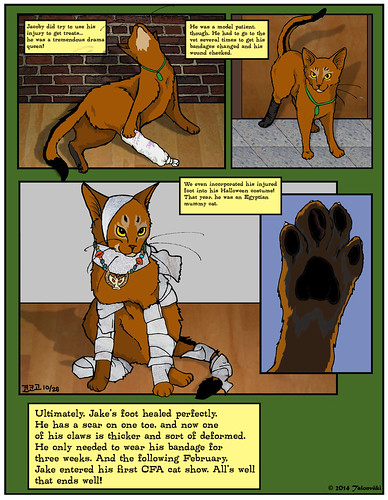 You would never know Jake ever got his foot caught in an escalator to see him today. He was extremely lucky, I know. He easily could have lost his foot – or worse. But all he has is a little scar on one toe and a funny deformed claw. And…well, and a pretty good story to tell.

All these drawings are based on photos I took of Jake during this time. Here is Drama!Jake, Jake at the vet, and Jake as an ancient Egyptian mummy cat.

So the pet store that has four Abyssinian kittens which I posted about yesterday responded to me through Facebook. Here is what they said:

“Dear Madam,
Unfortunately, I can’t answer what you would like to read. But we can guarantee the staff from our store (we spoke to Lognes since the first message) is taking care of them. They receive affection and caresses. The little brothers sleep together and they are safe every night.
You must know that your message has been transmitted to the people concerned in our company.
Best regards”

(They have this stock photo of Aby kittens on their Facebook page, too.)

So, basically, no answer at all. Abyfriend Max (she was Moose E. Puss‘s human) beat me to a response, and commented, “These little brothers are left alone together, in a cage, in a closed shop at night, for how many hours???!!!! Not acceptable.” So far, they haven’t responded to that.

I also responded: “Be that as it may…these poor kittens are not getting the socialisation they desperately need. And what will happen if they are not sold (at €1100 each, this is a distinct possibility) and they are no longer cute little kittens but rangy adolescents? Will the breeder take them back? Will you keep them until they do sell, whenever that is, no matter how old they are? What happens if they don’t sell until they become adults? And that doesn’t even begin to cover what happens to them if they ARE sold to someone who has no idea what Abyssinians are like. They’re not exactly like other cats, and they have some traits and habits that, if one isn’t prepared for them, can be difficult to handle. Do you follow the care of the kittens once they ARE adopted? Will you take them back if the people who buy them decide they cannot handle their quirks? Or will the purchasers end up dumping these kittens in an animal shelter? This is a question for ALL cats and dogs being sold in pet shops, but Abyssinians are my breed and I know them well…and I know they are NOT meant to live in a cage with little human interaction.”

And, shockingly, I know, they haven’t responded to that, either.