Tracy Weed posted this tribute to her blue Abyssinian, Uma, on the Abyssinian Cat Club group on Facebook, and it was so lovely I wanted to share it here.

UMA THE PUMA
I met Uma in early April 2006. Her breeder, Diane Jackson of Hill Street Blues, was retiring her after an early life of shows, prizes and litters. Her official name was Lil Devil In Bluejeans, Devi for short but I renamed her Uma. She was just 7 years old but she had already lived a life time. I never asked how many kittens she had birthed, only now am I curious. I brought her home with me to begin again, to live as a beloved pet with no demands on her at all.

As sensitive and possessive as Abyssinians are, Uma’s adjustment was very slow. She had her own room and still chose to live in the back of the closet. She came into a home with a cat-loving dog and Batman, my 14 year old black beauty, who was very ill and would die three months later from heart failure. Until Batman died I really didn’t see Uma, she was so deeply ensconced in her closet, and I only monitored her progress through empty food dishes and her deposits in her litter box.

After Batman died the door to Uma’s room was opened permanently. I would catch glimpses of her out of the corner of my eye, skirting the baseboards exploring her home but never approaching me or letting me approach her. And oh, she was so lovely, tiny and squirrel-like, with her soft, blue, puma color and bright green eyes. This was how we lived together for months, she would scoot away from me and only allow me to pet her when she was in a sun drenched sleeping spot.

Uma was not a typical boisterous clown of an Aby. I never knew if her calm demeanor was because of her age or if she was born that way. Our vet always commented on how unusually still and thoughtful she was. Uma’s guarded behavior lasted nearly a year, until I broke my leg and was laid up in a hospital bed in the living room. One day I awoke to find her asleep on the bed and the rest is history. Once she knew she owned me she called the shots.

I began letting Uma explore the garden when I was there working. She never once failed to come when I called her, if she had ignored me even once she would have lost her outdoor privileges. I had never had a cat who consistently came when called, but Abys are different. Uma began to be the mightiest of hunters, mostly lizards but an occasional bird, too, with the wonderful side affect of having been an Aby breeder she was toothless by seven years of age. Uma never killed her prey. They would escape her toothless maw when she’d open it to announce her catch. I never laughed at her, she was far too serious and dignified, but I was always delighted to see the catch scurry off or fly away.

Uma came to relish her life as a pet, and I fell more and more in love with her and her dainty feminine ways. She taught me to turn on the faucet for her whenever I was in the bathroom, and that she preferred to drink water out of a glass so there were always several scattered around the house. Her ‘love couch’ was the one place (except my bed at night) I could pet her, brush her, and snuggle her; otherwise she didn’t tolerate being picked up and never sat on your lap.

Uma began to have health problems when she was 10. First there were 3 cancer lumpectomies, one after another a year apart that she bounced back from nicely. But a year ago she had a bout of pancreatitis and that was the turning point. She had another last January and I believe that was the beginning of the kidney disease that killed her.

I haven’t mentioned how Uma created the deepest bond I’ve ever experienced with a cat, or how she trained me to love her just the way she wanted. She has only been gone a month and I still look for her and cry each night she isn’t there.

Thank you, Tracy, for allowing me to share this on my blog. 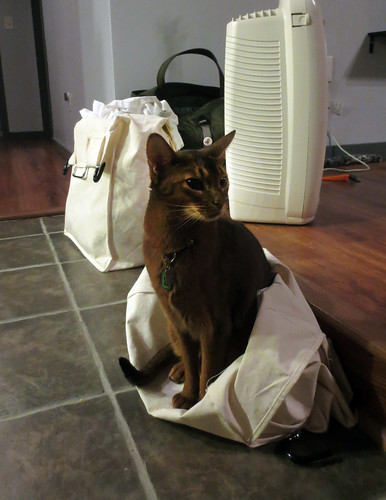 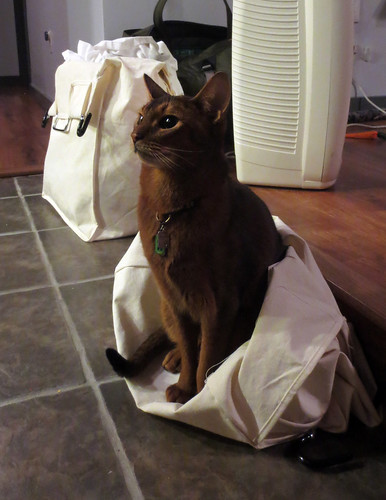 I got another response from Animalis on the four Aby brothers they have for sale in a pet shop in a Paris suburb:

“Dear Madam,
I would like to explain you how we work, because this information is important for everybody.

First of all, the staff in charge of our animals must be able to. They own a “capacity certificate” that means they are professionals.

When a person is interested on a dog or cat or any other animal, they explain the animal’s profile, to match with their living style. Even if you don’t believe it, we have already refused to sell an animal… more than once!

They also do adoptions at their stores through local shelters

If a dog or a cat didn’t find an owner, we take important measures to find a family as quickly as possible. It is our engagement. There is no return to the breeder.
A good integration is also important to us. It’s our procedure to call the owners to know if everything is going right. For dog’s owners, we offer every month “dog education lessons”, to show them how to live in harmony with their pets.

Animalis’ booth at a recent pet expo in Paris

And a month ago, we have inaugurated our animal protection association, the APA. So if one day something bad happens to the owner of one of our dogs or cats (if he gets ill, or homeless, or divorced), the association will find them a new home. Of course it is just a start, but we are working on this project because we care.

They carry Chi’s Sweet Home litter boxes! They can’t be all that bad… 🙂

I understand you don’t like pet shops, but you must know our staff is really loving and taking care. They are doing more than you think, even when the store is closed…
Best regards”

So. What do you think?