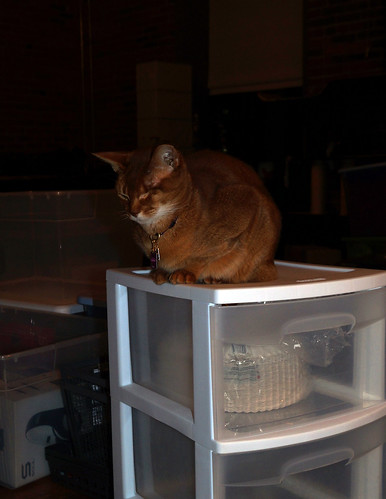 Angel spent a few days in a shelter in California before the rescue was able to get her into a foster home. I don’t know the full story, but apparently her breeder contacted the rescue and then, before the rescue could help her with her cats, she took five of them and dropped them all off at a regular, county-run, old-style “pound.” And then when the rescue came to get her cats, she told them what she’d done. California has a 72-hour hold rule, so the rescue couldn’t get these five Abys out for three days. Angel was one of these cats. She was only about 6 months old at this time, too. I think this was before she lost her eye. 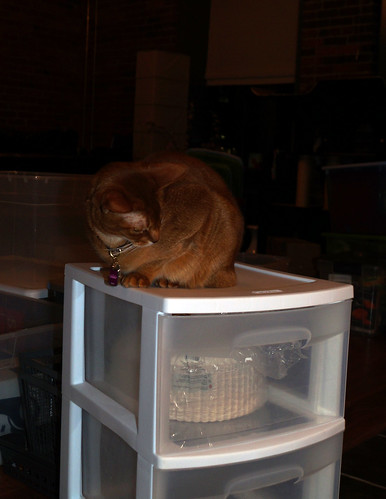 After this, Angel spent 10 months in her foster home. At first, it was fine, and she was living with a pack of other foster Abys and the resident cats. One of the resident Abys, though, a senior female (I think she was the oldest cat in the house), took a dislike to Angel, and she ended up living in an upstairs bedroom with another Aby friend. And then, when I brought her home…well, Tessie wasn’t the most welcoming. 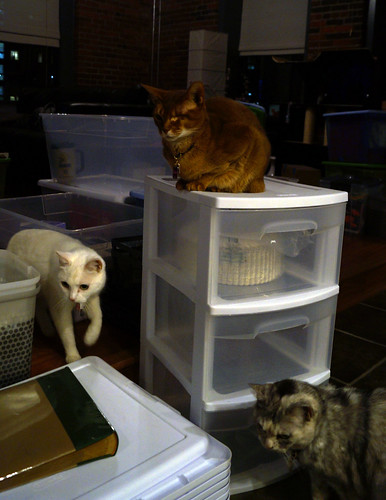 All of this happened eight years ago, but the scars run deep. Angel is still very…different from most Abyssinians. She’s still definitely an Aby, but she’s been affected by her early experiences. Sometimes I wonder why they call them “shelters.” They don’t seem to be very sheltering.