…Because I had cartoonist’s block and couldn’t come up with an idea until this morning. And I don’t have time to finish it properly, and a good cartoon that’s late is better than a half-assed cartoon that’s on time.

So, I apologise, and I’ll blame it on the snow. Everything is delayed in Boston these days…

In the meantime, I present a special LOLcat starring Jacoby.

This was made by Abyfriend Max Boutelle. You may recall Max from the story about her 18 year old cancer survivor, Moose E. Puss. I don’t know where she found this, but she added Jake to it and it made my day. Since her Moose was the star of a Cartoon Tuesday, it seems fitting that her little LOLcat be a place-saver for this week’s cartoon.

She also made this one.

I feel really bad about not meeting this deadline – in 162 cartoons, this hasn’t ever happened. I just hit a sort of wall, where I have lots of half-ideas, but no solid jokes. I finally managed to sketch up something, but I haven’t got time to colour it in tonight. However, I promise it’ll be posted later this week, and then I’ll have something for next week, too.

Right now, though, I need to feed the kitties, and then I’ve got some serious scanning and Photoshopping to do!

Abys are everywhere! Today, on the Swiss news site 20 Minuten, an article about litter features an Aby cuddling with his human.

Also, Abyfriend Cynthia pointed me to this excellent slide show of “25 cats trying to figure out why they are at the cat show”. 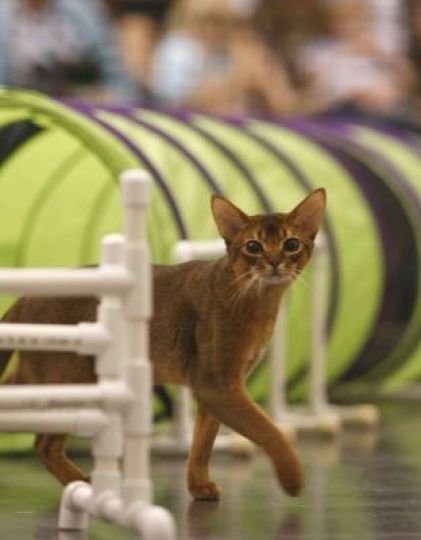 It not only features her Aby, GC RW Absolute Crawdaddy, doing agility…

But it also features this somali, named Kondwani. I’m not sure if it’s just that thing where once you have something, you notice it everywhere, but doesn’t it seem like Abys are getting more facetime in articles and advertisements lately?