So, I’m sure you’ve all seen the incredible and internet-infamous photo of a weasel riding a flying woodpecker by now.

If not, you probably saw my Wordless Wednesday post this week.

However, after I posted this on Wednesday, I got to thinking that…while it was good, it could be better. So, last night I went back and fixed it. And while I was doing that, I thought people might be interested in what I’d done to make Jacoby ride the woodpecker. 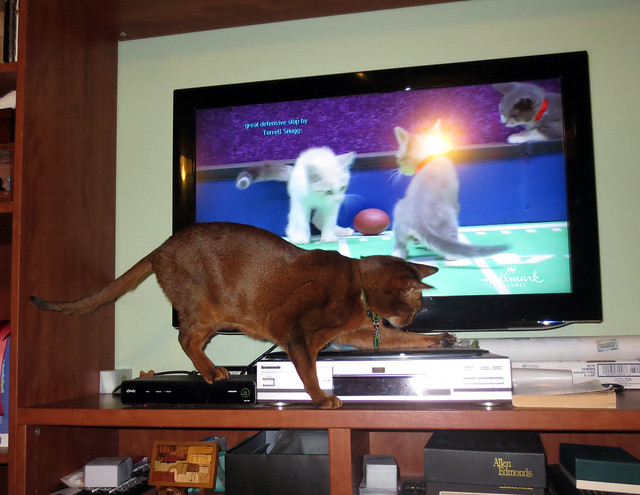 For the quick original version, I went through all my photos of Jake looking for one of him in a pose similar to that of the weasel’s on the bird’s back. I finally decided on this one of Jake playing with the kittens in the Kitten Bowl.

Then, I found the biggest, highest-res image of the #WeaselPecker on the internet that I could, and I erased the weasel, leaving only the bird.

Then I scaled Jake down, put him on the bird’s back, and filled in the “holes” with colours taken from the bird and painted on underneath Jake using a feather brush. I also refined Jake’s edges using the “Refine Edge” tools under the “Select” menu. Then I toned Jake down to match the lighting on the bird a little better and put a slight motion blur (1 pixel) on him using the Motion Blur filter.

And it was good…but I knew I could do better. Jake’s front arm didn’t look right to me, his shoulder looked Photoshopped – even though it really wasn’t! – and I didn’t like the way his tail looked. So I went through the photos again, looking for arms and tails that would look better on my flying Jake. 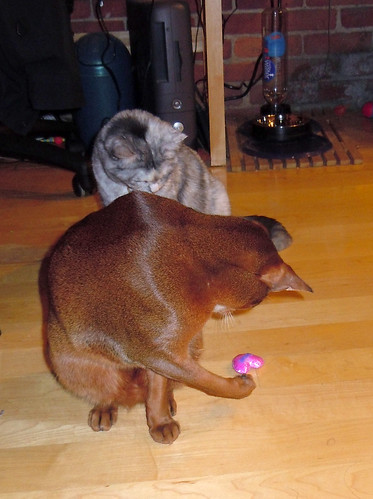 I found this photo of Jake hooking a toy with his paw, so I selected just his arm and shoulder, copied it onto a new layer over the current Jake and sized it down.

Then I erased the original arm, and blended the new arm in. Using the “Warp” function under the Transform menu, I tweaked the arm a little bit to make it look like Jake was holding onto the woodpecker’s neck (despite what National Geographic might think, it’s not that hard to make a mammal virtually hug a woodpecker). 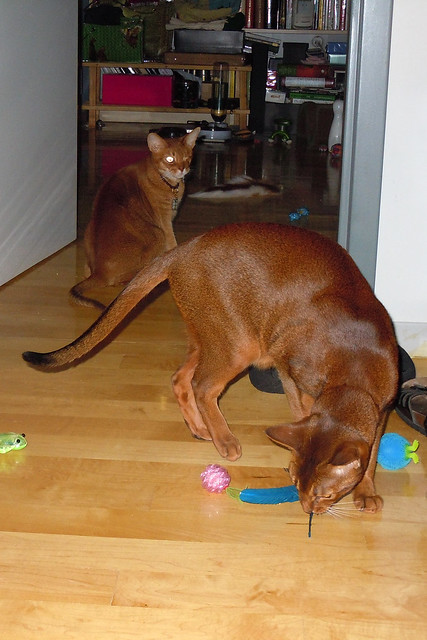 I also wasn’t happy with Jake’s tail. Even though that’s how it really looked in the original photo, on the back of the woodpecker it looked odd. So, I took Jake’s tail from this photo of him and Angel.

Just as I’d done with the arm, I selected the tail and part of Jake’s rump, pasted it onto a new layer, and blended in to the rest of Jake. 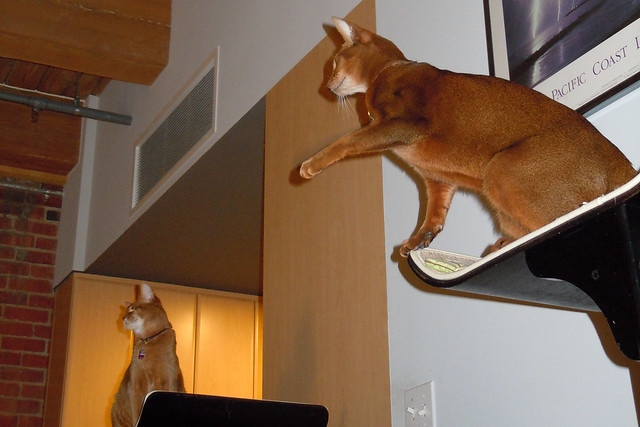 I still wasn’t happy with Jake’s neck and shoulders in the original version. Even though they weren’t Photoshopped at all, they looked like they were – it looked like I’d attached Jake’s head and shoulders to a different body, even though I hadn’t. So I took a nice shot of Jake’s body that I had considered as a possible arm donor…

This time, I didn’t need to flip it. I sized the body piece down, placed it over the rest of the body, and blended it in using the eraser in brush mode, with one of my fur brushes.

I did one more tiny tweak to Jake’s tag, bending it back with the “Warp” tool to make it look like it was being blown back by the wind. Then, when I had all the body pieces blended together the way I wanted them, I merged the layers to create a consolidated Jake. 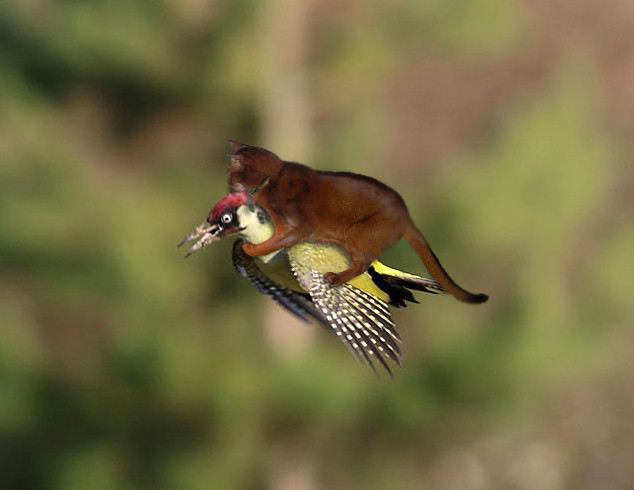 I turned the woodpecker layer back on, placed Jake on the bird’s back, and touched up the empty spaces underneath Jake with the rubber stamp tool. Then I added a slight motion blur to Jake as well as a slight drop shadow. And there you go: Jake riding a woodpecker!

3 thoughts on “Aby-a-Day – March 6: On the wings of a woodpecker (Photoshop Friday)”