At the Seacoast show this past weekend, Jacoby did quite well: He was 10th, 8th, and 3rd Best Allbreed Cat in Premierhip and then he was 5th Best Shorthair Cat in Premiership. Not bad at all, considering he’s 6 years old! I started showing Jacoby in cat shows later in life. His very first show was in February 2011, a couple of months before his second birthday. 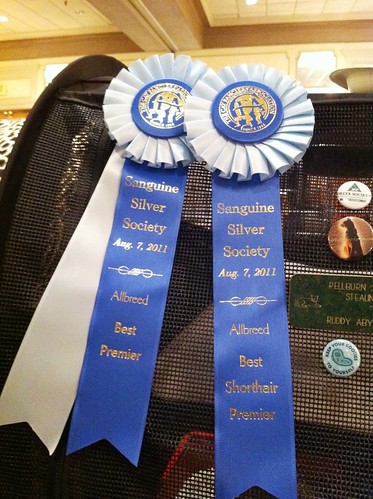 I think it is very cool that Roger Lawrence was the first judge to award a rosette to Jake in a cat show after he collected all his purple ribbons. 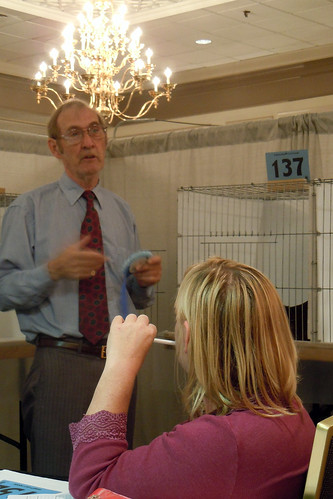 Roger’s retired from judging now, but he was a legendary Aby breeder in his time. He founded Tailsend cattery which was one of Sherry’s inspirations when she started breeding. 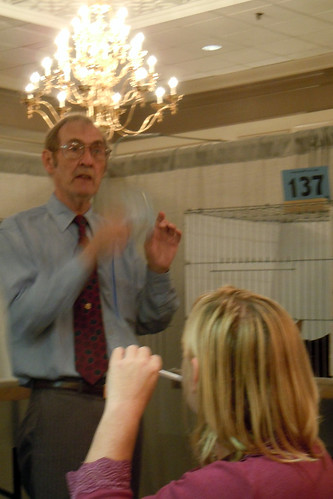 I remember watching Roger when he judged Jake. He greeted Jake with a “Hello, Mr. Aby,” and commented that, even though he has and has bred other cats, he’ll never be without an Aby in his life, and at that time he was living with four of them. He checked Jake over, explaining to the spectators that Abys should be colourful cats with two or three distinct bands of ticking on each hair – and four if possible! He commented on Jake’s clear coat when he looked at his neck, meaning he doesn’t have any bars or necklaces left over from long-ago tabby ancestors. As he put the permanent and the purple ribbon on Jake’s cage, he told him that he “reminded him of his Aby, Gomer.” 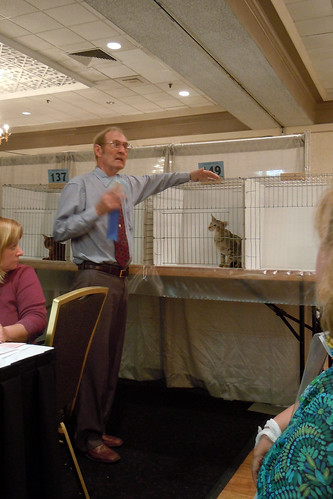 He was a wonderful judge who explained what he was doing and what he was looking for in each breed. He also told us, “back in the day, Premiers were not as good as Champions. You neutered or spayed the subpar cats and showed them as Premiers. But things have changed, and today Premier cats aren’t second-class anymore. Any one of these Premiers today could compete as Champions.” 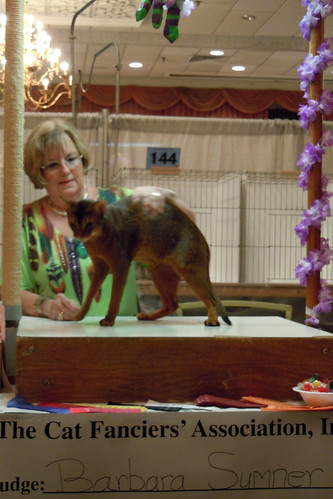 He got another set of rosettes from Barbara Sumner later that same day. 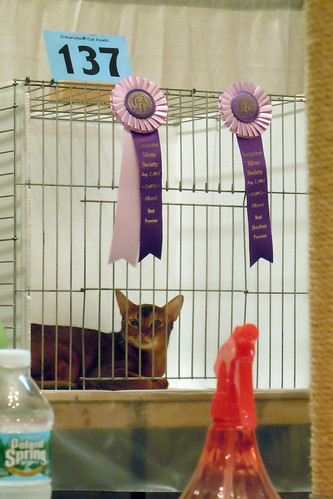 It ended up being one of his best shows, I think – definitely his best show before he Granded. He was best Allbreed Premier and best Shorthair Premier in two rings! 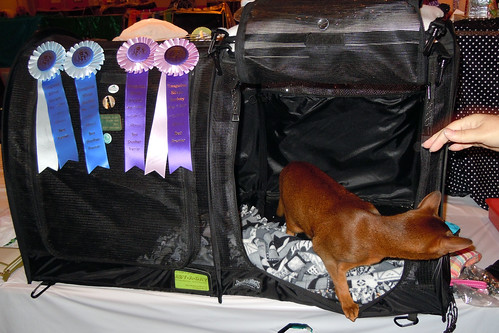 While we’re talking history, I happened upon something fun: 1997’s Best Abys in Championship. #2 is Jake’s maternal great-great-great grandfather Byblos St. Lawrence of Instincts! In the photo, he looks like he’s outside on a harness and leash so obviously that kind of thing is in Jake’s blood.