Jacoby started showing late in life compared to most show cats. He started showing when he was almost 2, and now he’s 6 years old. At the Seacoast show last weekend, he made four out of ten finals, placing 10th, 8th and 3rd best Allbreed and 5th best in a Specialty Shorthair ring.

Some would say this is impressive. Most show cats retire by the time they're 2 years old. 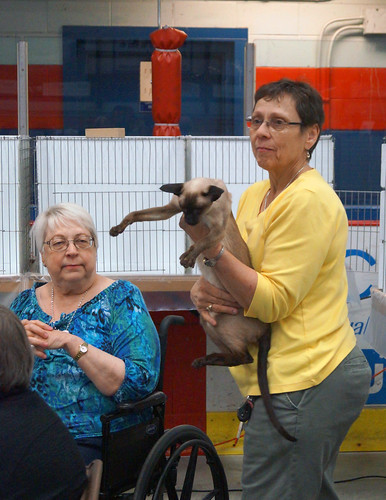 However, Jake is nothing compared to a Siamese in the North Atlantic Region. GPD, NW, RW Minghou Native Dancer of Tayohme, a seal-point Siamese neuter, is almost 11 years old, and he is still a regular fixture at cat shows. 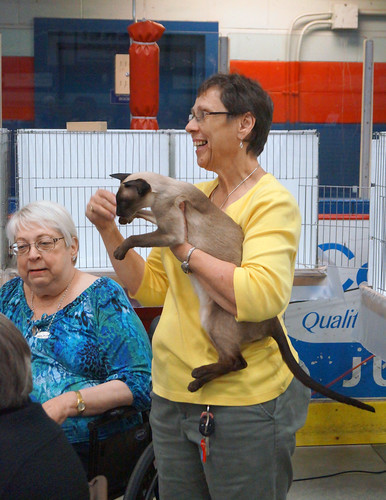 Seen here with his owner, Sandra Hogan (in blue), and his breeder, Pat Muise, Danny has been at least a Regional winner, if not a National winner, in CFA every year he’s been shown. He is the first Siamese to earn the “Grand of Distinction” title. 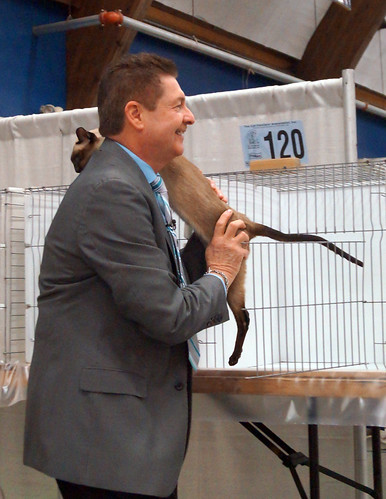 When a judge comes to take Danny out of his cage, Danny goes right for the shoulder and hugs the judge as he’s taken out. Here he is with Russell Webb. 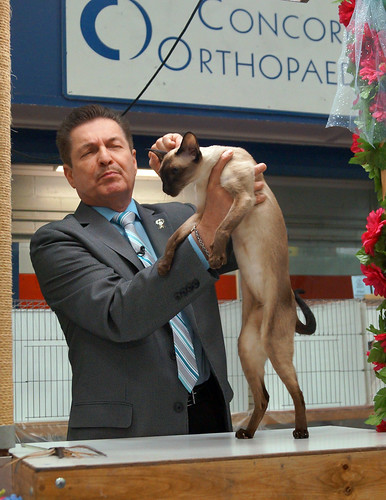 Even though he’s 11, he’s really clear and his body is really light for a Siamese. As Siamese age, they tend to get darker, and their body colour tends to blend with their points. Danny has managed to keep a pale body. He’s also managed to keep his boyish figure all these years. 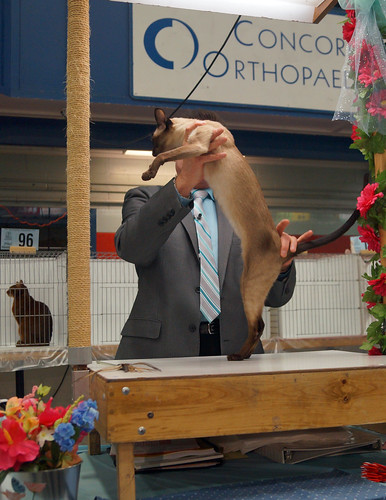 (Notice who’s in the background, waiting his turn!) 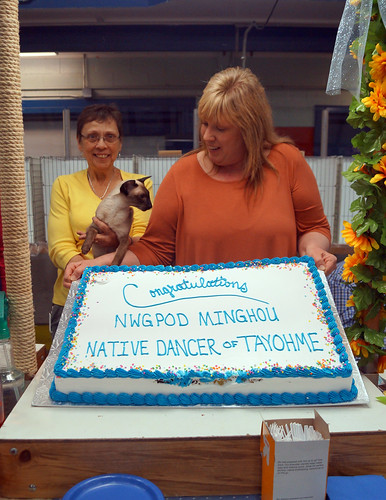 At the show last weekend, Danny had a cake in his honour, because he was a national winner for the last CFA show season. 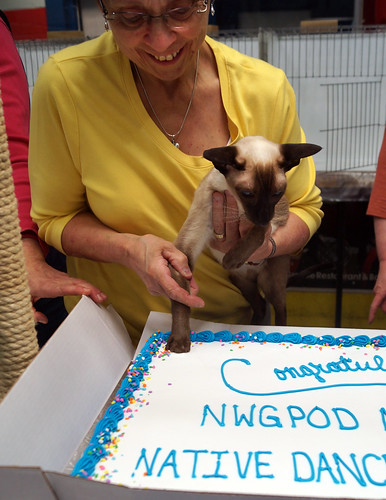 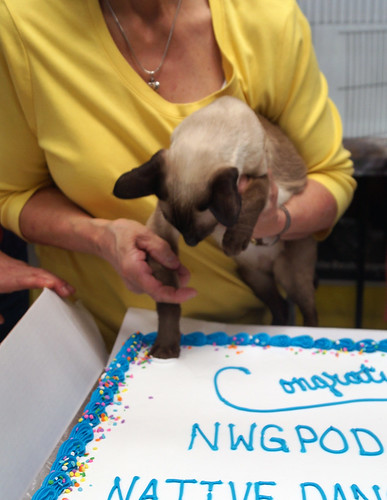 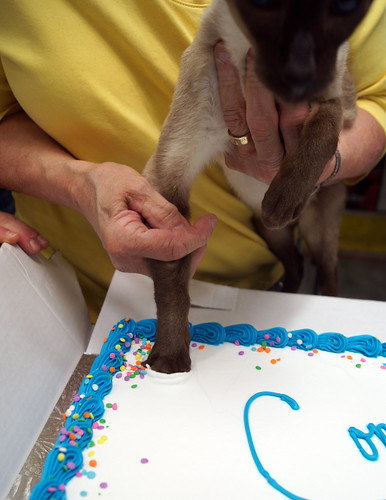 Like any celebrity, Danny was asked to put his pawprint in the frosting of his cake. 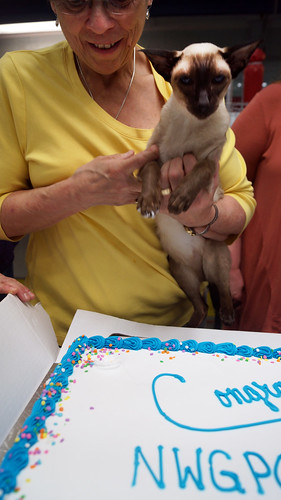 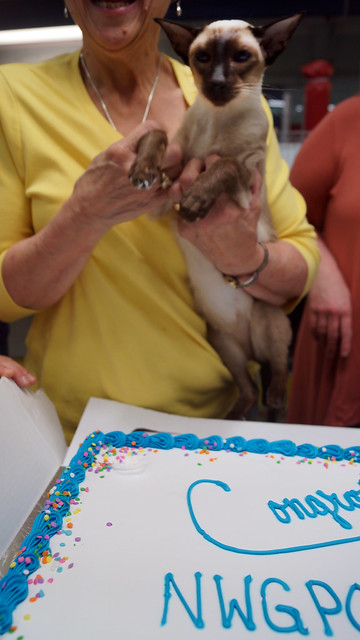 I think he really enjoyed that. 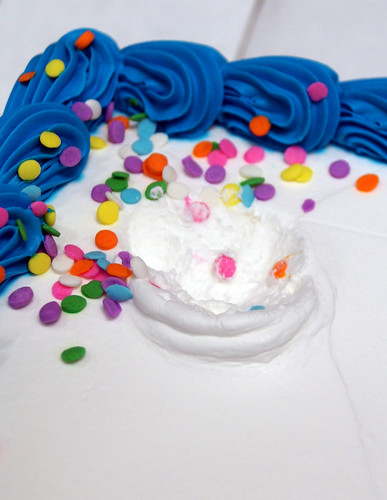 It was really cute, too. I don’t know who got that piece of the cake – probably his owner. 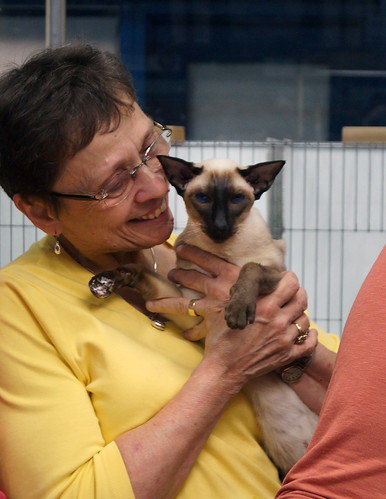 Both his owner and his breeder are really proud of him. And I think his breeder is really happy to be able to see him all the time. 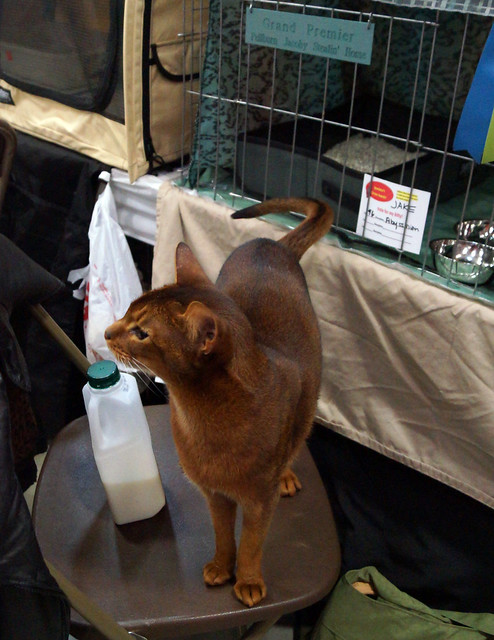 Danny is an impressive Siamese, and an impressive Grand Premier. Some people think Jake is too old to show…but if an 11 year old Siamese can keep showing – and making finals – why shouldn’t Jake? His colour has only gotten better as he’s aged…although I don’t take him to enough shows to earn a Regional or National CFA title, at the age of 6 he still holds his own in the show ring.