Björn found another holiday cartoon I drew while clearing the basement storage for the imminent arrival of all my crap. This one was a quick sketch I drew, without pencil, for his then-girlfriend Titti back in 1997 when I was living in San Francisco with my two Siamese Harri and Patrick. 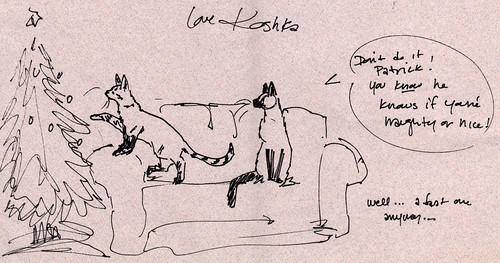 A quick sketch like that? Of course I didn’t remember it after 18 years. But when he showed it to me on Sunday when he discovered it I was instantly struck with the similarity of this little scribble of Patrick and Harri to this cartoon I did in 2013 starring, of course, Jacoby and Angel: 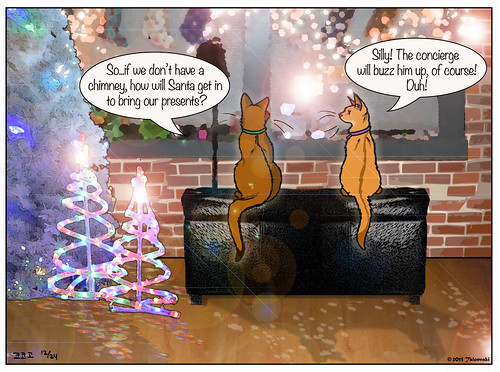 I mean, okay, the joke is different…but the basic dynamic is very similar. I’m also amused that Harri seems to have transitioned from being the “goofball” (aka Jake) character into being the “intelligent straight-man” (aka Angel) character with the introduction of Patrick, who was younger, rather than Sigrid, who – like Angel – was older than Harri. Or, the girlcat is always smarter…when there is no girlcat, the older cat is smarter.

Still…interesting to see an embryonic idea become a full-fledged cartoon years later…even if it was a complete accident!