1 May is the “new year” for many organisations I’ve been involved with over the years. One is the Society for Creative Anachronism, which is currently celebrating its 50th year. Another is the CFA, which starts its new show season on 1 May.

As a part of CFA’s new year’s festivities, they announce their National and Regional award winners, which include the best of the breeds and the top 25 cats in the Kitten, Championship, Premier and HHP classes. And this year there was a huge surprise: Jacoby is one of the 21st Best Cat in Premiership in the North Atlantic Region! 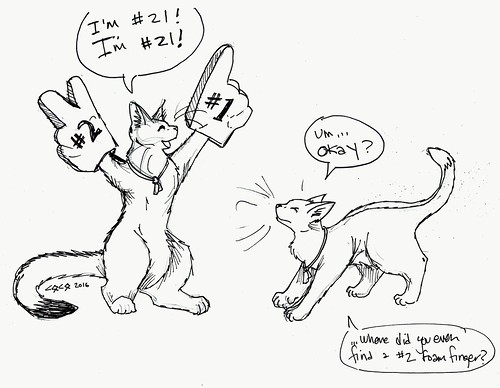 This was completely unexpected, as we didn’t even go to that many shows this past year…but the shows we did go to he did pretty well, apparently! And now, he will get to add some more letters to his name; he will now be GP, RW Pellburn Jacoby Stealin’ Home! And even funnier…last year our friend Linda’s Somali, Pippi was 21st Best Cat in Premiership in the North Atlantic Region last year…so they have that in common along with their costume prowess!

Look who was on my Page-a-Day Calendar today! Luna, the lovely Somali from Belmont, MA (not too far from Boston)!

Somalis like to engage. Alert and curious, the breed’s dramatic, foxlike appearance, with big ears and bushy tails, is complimented by their zest for fun and play. And much like their Abyssinian cousins, Somalis look both elegant and untamed. They also love their people and flourish when affection is returned.

I know Summer will agree with all of this!