In my Swedish language classes (SFI, Svenska för Invandrare or Swedish for Immigrants – it works in both languages), I have reverted to a habit that sustained me through junior high, high school and university: Sketching in class alongside my notetaking.

I usually doodle things that go along with whatever we’re learning about, starring Jacoby, Angel and the kittens (collectively called “The LunaTicks”). Last holiday season, I did these three little cartoons. The first is Thanksgiving, or as they call it here in Sweden: “torsdag.” It’s not celebrated here, but turkeys are fairly easy to find. They are TINY (I can barely find one that’s 5kg (11 lbs), let alone the 20+ pounders I used to get back in the States. And instead of cooking on Thursday, I do the turkey on Saturday, but other than that it’s the same feast I always make.

Including the grabby Aby hands. Jake is saying, “My turkey…all for me…” and Angel is saying, “And me!”

After Thanksgiving, of course, comes Christmas, or Jul. It actually starts after Halloween here, with lights in every window to ward off the increasingly dark days. Sweden is an incredibly secular country, but they celebrate Jul to the hilt, combining a variety of Norse and Germanic traditions with a smattering of saints and advent and, of course, Donald Duck. Jul is a big deal here.

One big day in the lead-up to Julafton (Christmas Eve, the day when Tomten (Santa) brings the presents and the big meal is eaten) is 13 December, Luciadagen, a celebration of Santa Lucia, a 3rd-century martyr, who according to legend brought “food and aid to people hiding in the catacombs” using a candle-lit wreath to “light her way and leave her hands free to carry as much food as possible.” Her feast once coincided with the Winter Solstice, the shortest day of the year before calendar reforms, so her feast day has become a festival of light. 13 December also happens to be the first day of Christmas, 12 days before Christmas.

Santa Lucia’s Day is celebrated most commonly in Scandinavia, because of her name (Lucia = light) and she is represented as a young woman in a white dress with a red sash, wearing a crown or wreath of candles on her head. She is attended by other girls dressed the same (except for the crown) and boys portray stars and Tomtens. It is said that to vividly celebrate Santa Lucia’s Day will help one live through the long winter days with enough light. It seems to be a perfect blend of pagan and Christian traditions.

So of course I had to draw Angel as Lucia.

Another Lucia tradition are saffron buns called “Lussekatter,” Light Cats or Lucia’s Cats, so called because they look like curled-up cats. 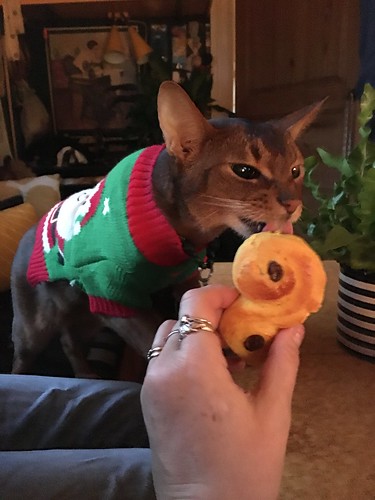 Of course, Jake was all over that part of the tradition!

Another Jul tradition is the Julbock – the Christmas Goat. Commonly, it takes the form of a straw goat, but there is also a depiction of a man dressed in a sheepskin and a straw goat mask who carries a sack over his shoulder filled with toys for all the children…it’s complicated.

But of course if Angel was Lucia, Jake had to be the Julbock.