On 20 September, Alfred was neutered. He was showing signs of…well, feline masculine maturity. Playfights with Logan ended up with Freddy on top, grabbing Logan’s scruff and treading his back feet…yeah, I called the vet when I saw that and made him an appointment to get snipped.

Of course, that reminded me of snippings past… 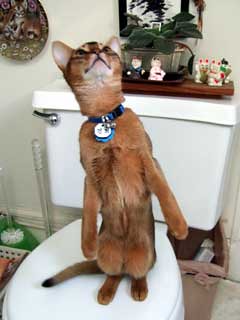 When Gun-Hee was neutered, he came home and was completely…unaffected. 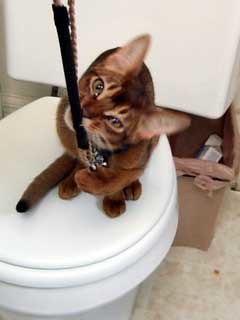 I was trying to take photos of him, but he insisted on playing with the cord on my camera. 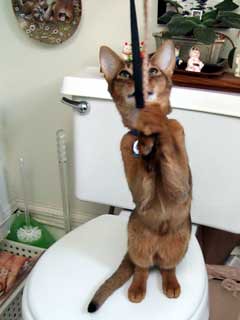 This is a boycat who has just had his berries picked. But you would never know it to look at him! 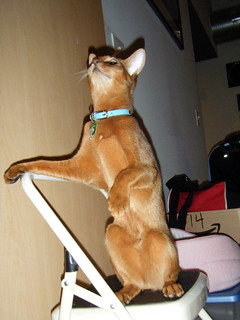 It was pretty much the same story when Jacoby was neutered. According to Dr. Natalie, as soon as he came out of the anaesthesia he started demanding to be fed with a rather strident meow. 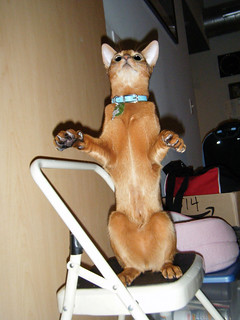 He also insisted to be let out of his carrier so he could run to our apartment. 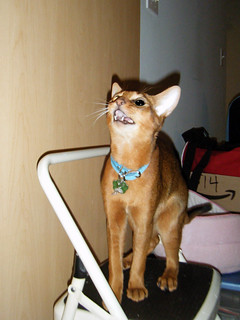 Yeah…losing the family jewels isn’t much of a thing with Abys, it seems.

The same day that Freddy had his surgery, I was readmitted to the hospital for another surgery on my hand, so I didn’t get to see how he handled his post-op care. So Björn sent me this message which prompted this conversation:

B: If Freddy is affected by the neutering, he’s hiding it awfully well

B: Nope. Just his usual hyperactive self

K: Jake was completely unaffected, too. He also shouted the place down for food as soon as he woke up.
Did you see the after care instructions?

B: Yeah
“Put him in a dark and quiet room the first day”… He would want to get out of it in five minutes!

K: Less if there was no food.
I always let them do what they want, as long as it’s not sit in dirt…or a fireplace. Pezza (a cat I had in junior high school) did that when he was neutered and he got infected.

I’m sorry I missed it. 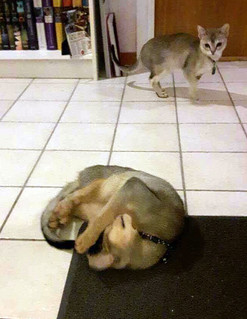 This is the only post-neutering photo I have of Freddy…but you can see what I mean. Abyssinians don’t seem to be much affected by getting neutered.

(…And pay no attention to the Singa in the back who’s thinking, “Nyah nyah! I get to keep mine!”)