After my visit with Björn over Christmas 2015, I posted about the different types of cat food I found in Sweden 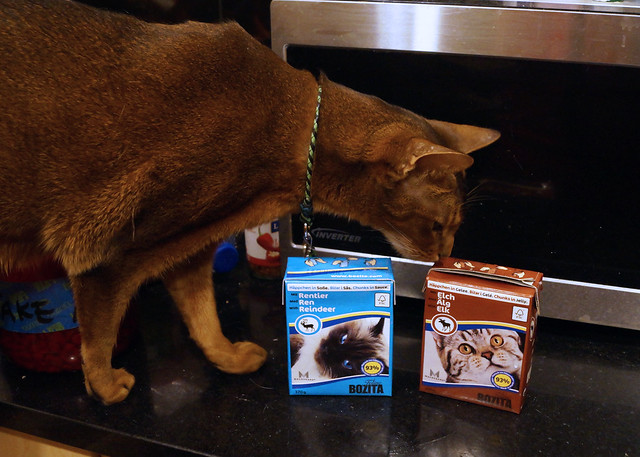 The food I was most excited to try out on the cats was the Swedish food Bozita. It’s very high quality, 93% meat (but usually only about 7% of the meat flavour on the box). In the EU and Sweden, pet food is strictly regulated, and everything is listed out by percentage. You almost never see the vague and all-encompassing “Meat and Bone Meal” or “Animal By-Products” listed on pet food labels here. You also don’t get pet food with expired meat from supermarkets (including the styrofoam tray and plastic wrapping), roadkill and euthanised shelter animals. 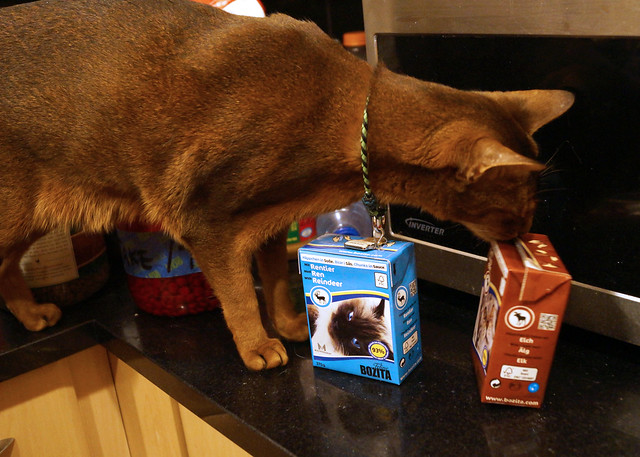 Jacoby was eager to try it! 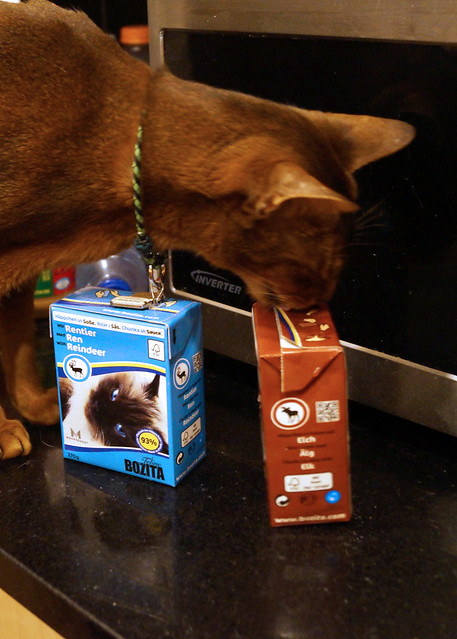 So eager, in fact, that he tried to open the box with his teeth! 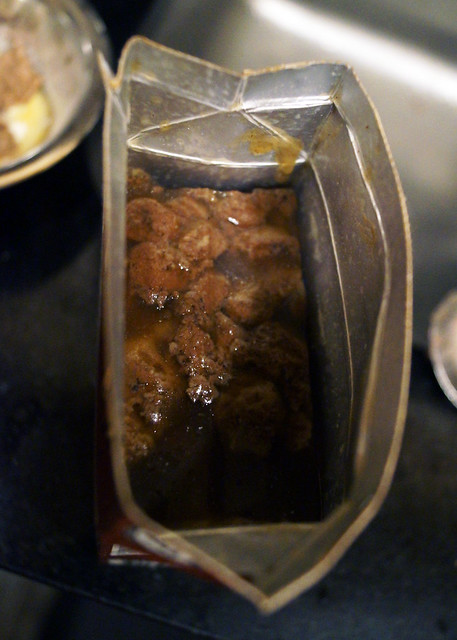 It looks really good when you open it, too. And the packaging, in Swedish-invented Tetra-Pak boxes, is so much nicer and easier to deal with than either cans or plastic pouches. 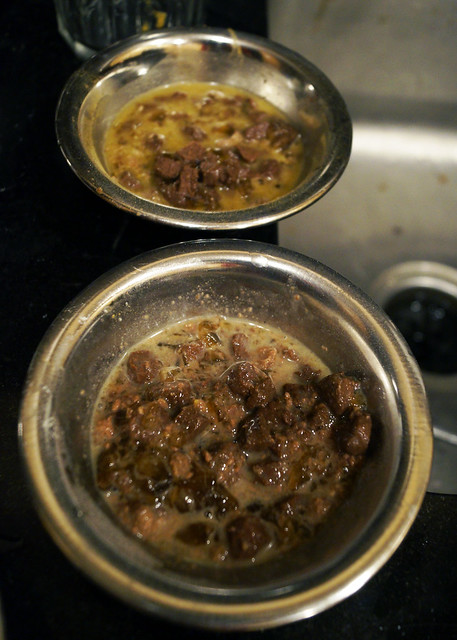 I mix it with a little warm water, with probiotic powder for Jake, and L-Lysine powder for Angel. 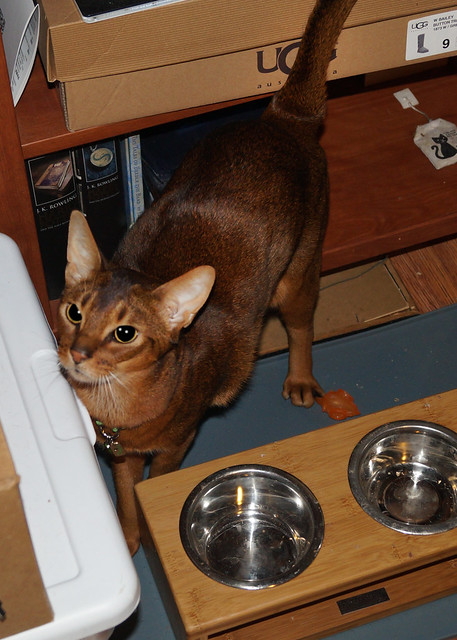 Jake could not wait to taste it. 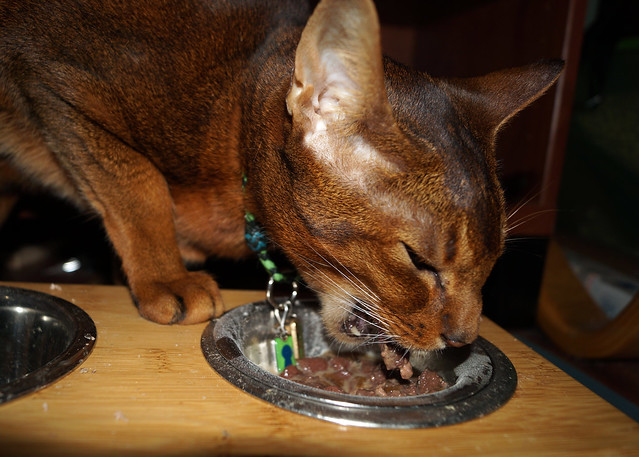 He liked it! Hey Jakey! 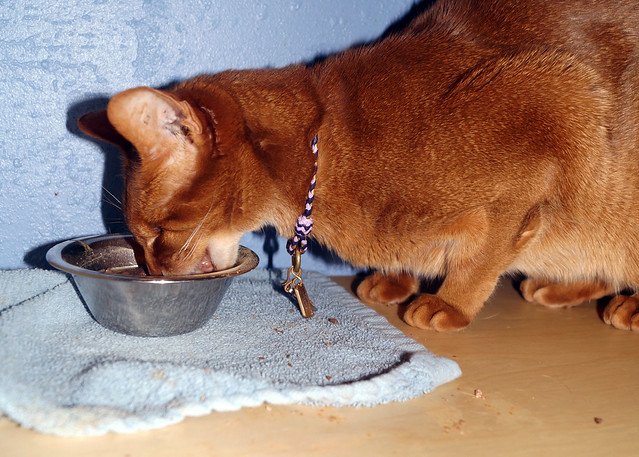 Angel loved it too, and she can be particular about food (strange for an Aby, I know). 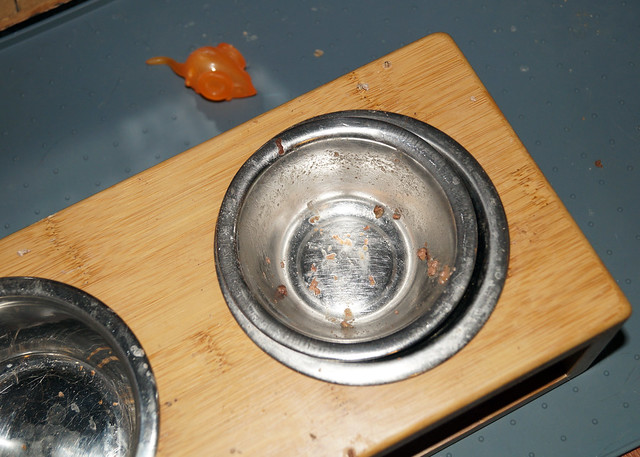 Clean plate club all around! 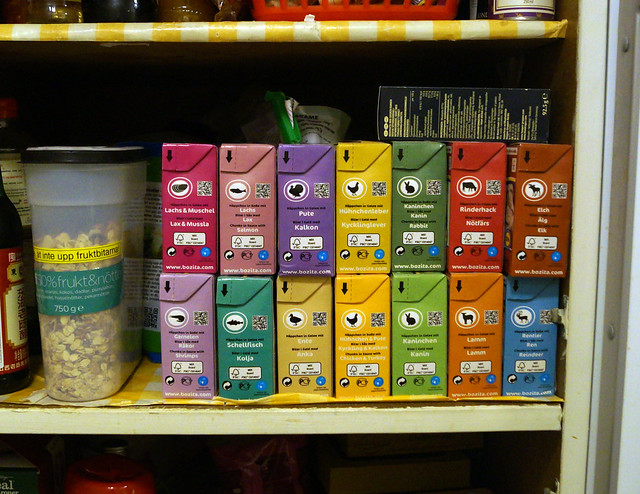 Now we have a cupboard full of a wide selection of various fish, bird and mammal flavours, including crayfish, salmon, duck and rabbit along with the moose and reindeer. And you can see what I mean by the Tetra-Pak boxes being easier to deal with than cans or pouches. My main concern is feeding them too much of any one protein source. I don’t want to have too much chicken, or beef or salmon…I want them eating as many different species as I can find so they don’t get hooked on one type of food. 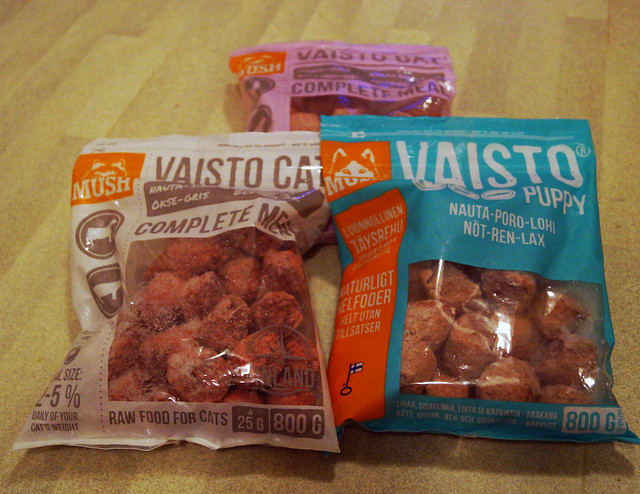 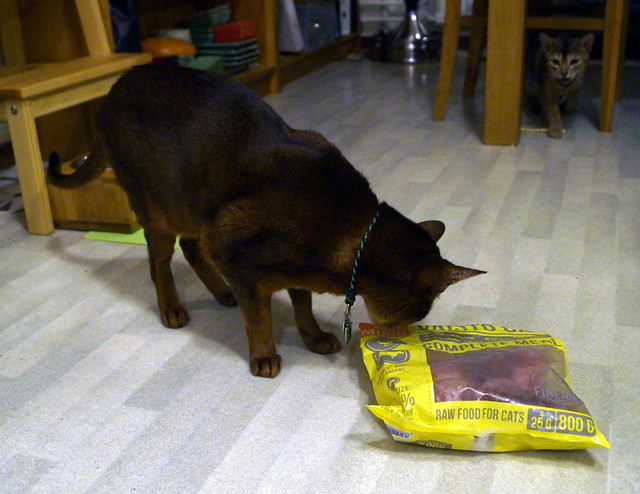 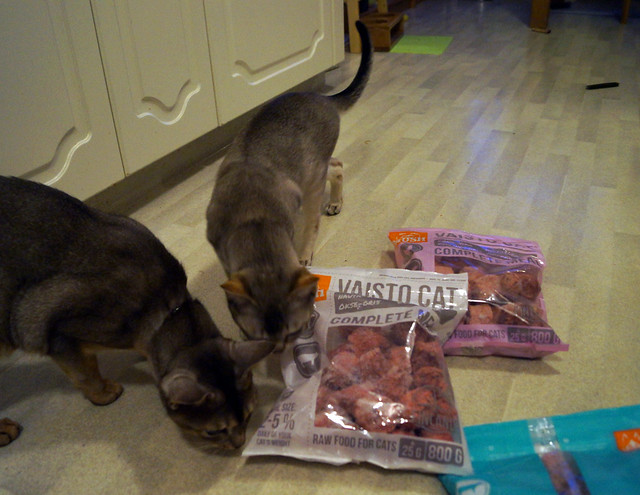 I also feed them this marvelous frozen raw food from Finland, Vaisto Mush. 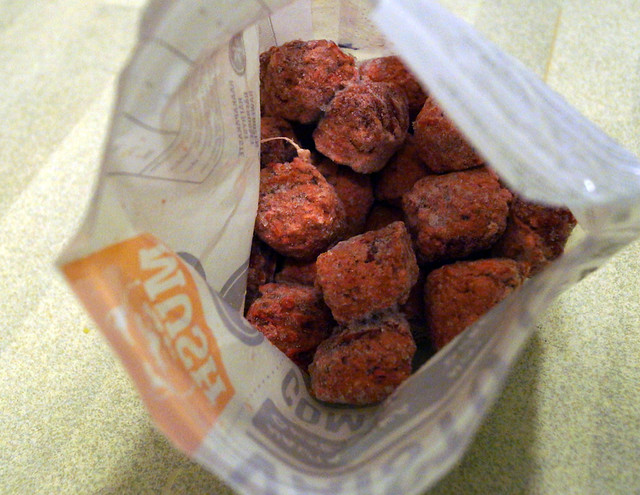 It’s little meatballs with real raw ingredients, bones and organ meat, very easy to deal with and feed – basically one ball, mixed with the Bozita and whichever prescription food the cat in question eats (UT for Jake and Angel, Kitten/Growth for Logan, Weight Management for Alfred, and Renal for Pyret).

(Yeah, I’ll do a post about just HOW I feed everyone in the near future…) 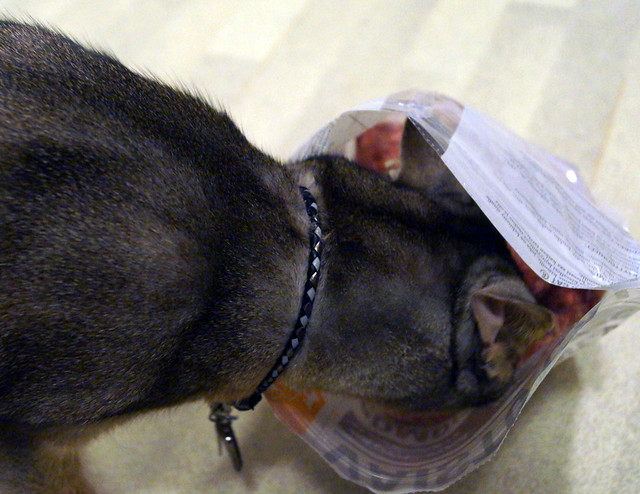 Freddy! You can’t eat them when they’re still frozen solid! 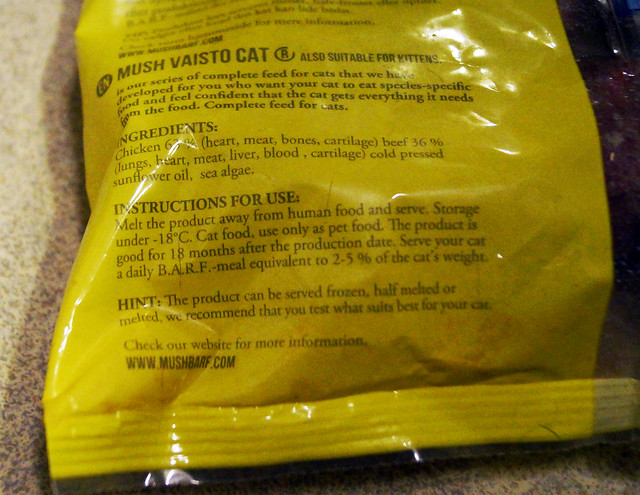 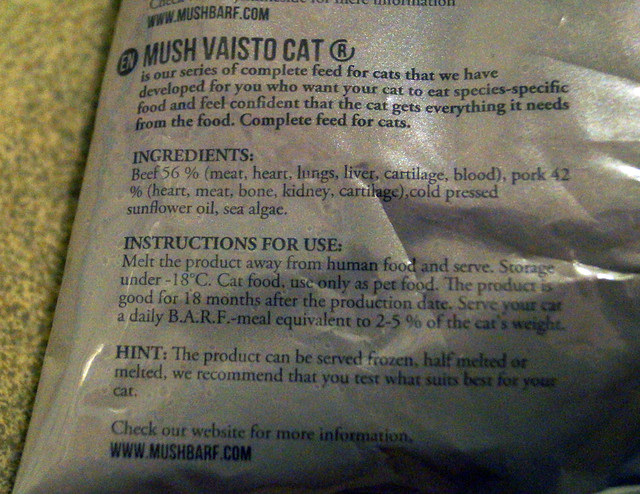 The link to the Cat raw food isn’t in English, I’m afraid; they only have Finnish and Swedish (and German) – the English pages seem to be down. They do have English on their packaging, however, so you can read the ingredients in these photos. 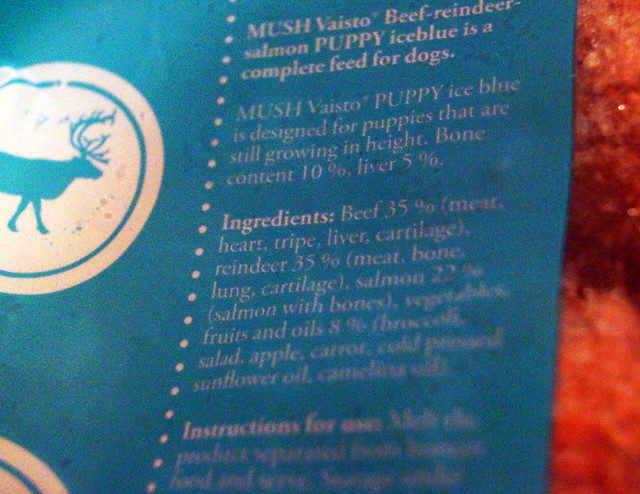 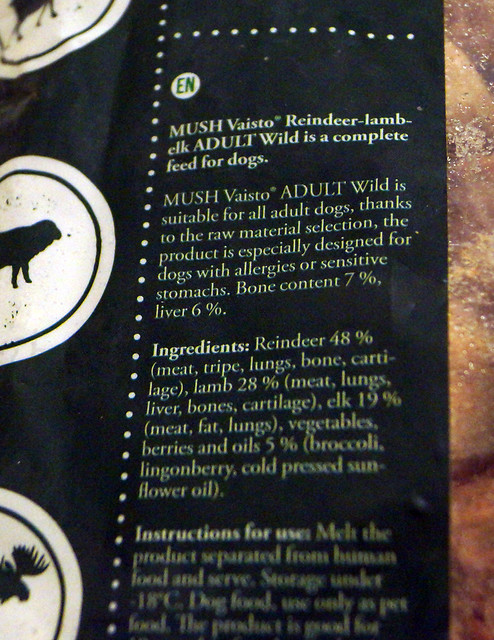 I know that cats are not to be fed dog food of course, because cats and dogs have different nutritional needs, but the Puppy and Wild blend percentages are almost identical to the Cat blends (they include 8% and 5% respectively vegetables and fruits, while the Cat is almost 100% animal, and this is not their exclusive diet. I always mix it with Bozita and prescription food. 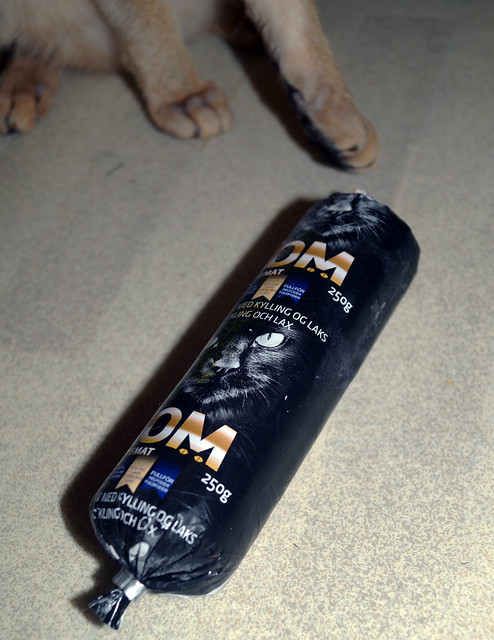 I also sometimes get Norwegian-made Vom frozen cat food. It’s good, with chicken and salmon, but it comes in a sausage-shaped package. You have to thaw the whole “sausage” in one go, and sort of squeeze it out like toothpaste. It’s a bit harder to measure out properly, and it’s a lot messier. I prefer the “kattbullar” to the sausages, but I like to get them once in a while for variety. 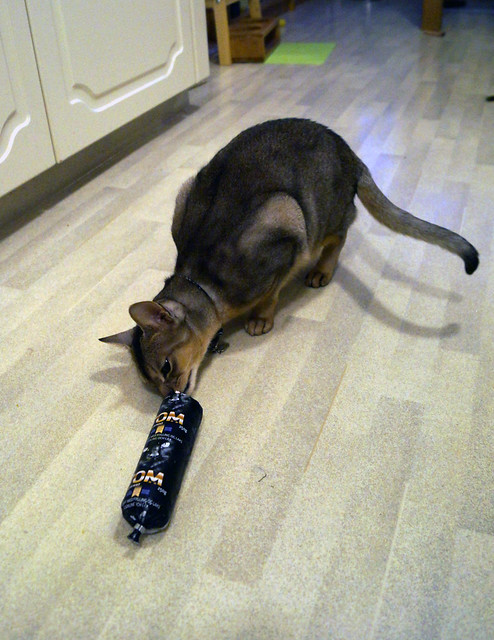 Freddy ate a lot of this type of raw food before he came to live with us, and when he saw this one he recognised it instantly. 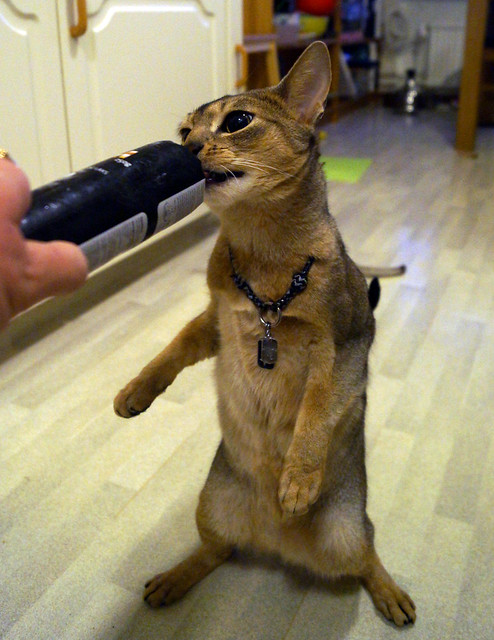 …And, of course, tried to eat it. I swear, he is endlessly hungry! 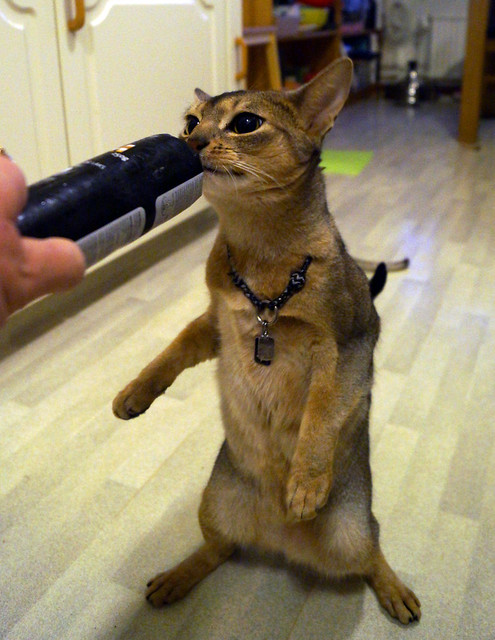 The only thing about the raw that I don’t like? Jake flat out refuses to eat it! He likes raw meat when I am cutting it up to cook it…but he won’t touch the raw, thawed meatballs, or the Vom sausages. Not even if I offer it to him as a treat! I have no idea why. Angel, Logan and Freddy love it, and I am happy to be feeding them a mix that includes raw in their diets.