When Alfred and Logan joined our family, they ate together in our guest room, also known as the Kitten Room. This was because I didn’t want the big Abys eating the high-calorie kitten food, and I wanted to give the older cats a little break from the rambunctious kittens. 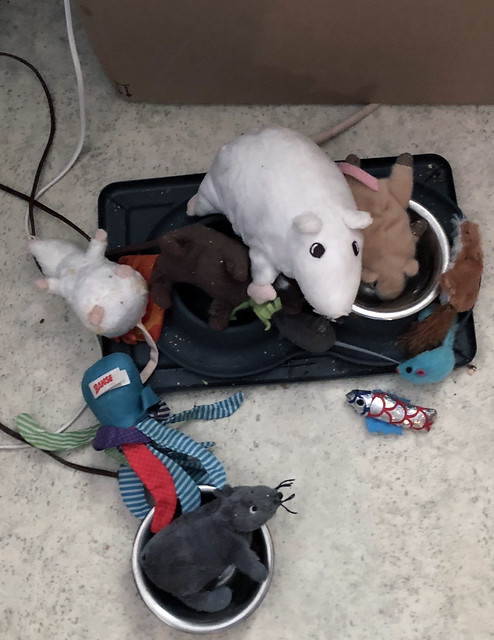 Every time I went to let them out and collect the bowls, I would find them covered in a pile of toys. Both of them will make the motions of burying old food by scraping the floor around the dishes, so I couldn’t be sure who was doing it. 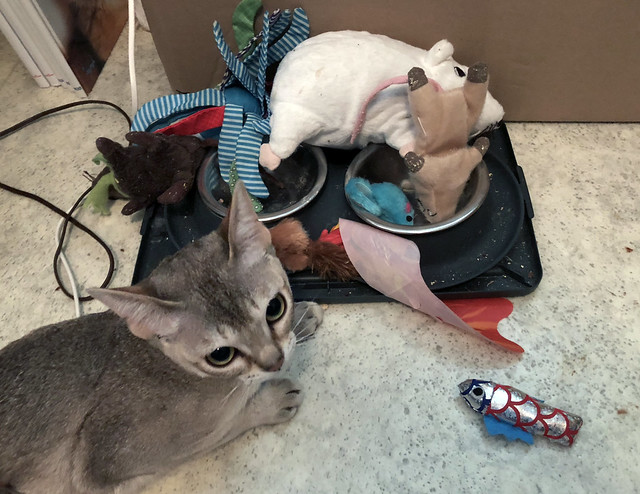 Logan would usually follow me when I collected the bowls, but he seemed almost as mystified as I was. He didn’t give me any clues as to whether or not it was him. So finally, I set my camera up on a tripod, started it up, and left it running while they ate. The original video was 23 minutes long, so I edited out the times that no cats were in the shot and nothing was happening. Even after clipping the boring bits out, the video is still almost 6½ minutes long!

So, if you don’t want to watch it in realtime, here is a sped-up version that takes half the time.

Either way, mystery solved! It’s Freddy, although Logan helps. And Freddy still buries his bowls, even now that he’s over a year old. He’s been eating on his own in the Kitten Room, and when I come to collect his dish, I always have to dig it out from underneath a pile of toys.

Even funnier, it seems to be a family trait. Freddy’s older half-sister, Hera, also covers up her food bowls when she’s finished eating!

2 thoughts on “Aby-a-Day – 25 March: The Case of the Buried Bowls (Cinematic Sunday)”