These go back to when I still lived in Boston. I was brainstorming ideas about all the hoops I had to go through to feed Jacoby, Angel, Tessie and Kylie. When Kylie was a tiny kitten, we made a box with a hole only she could fit through so the adult cats wouldn’t eat the higher-calorie kitten food. We did this with Logan, too, so he could have food whenever he needed it. 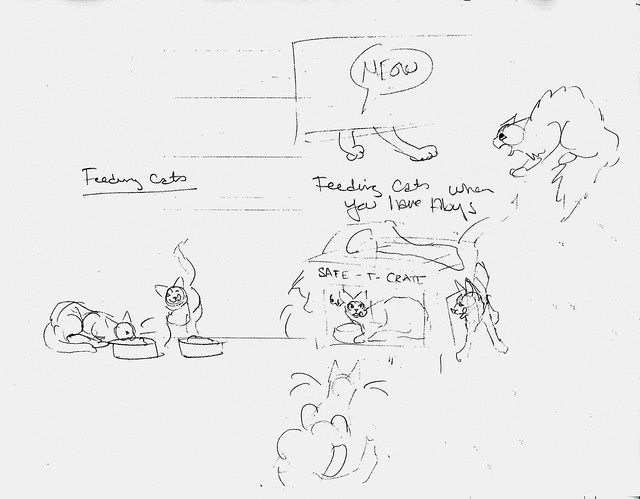 This was some kind of idea about the kitten box and the menacing big cats hovering around it. I still am not sure where I was going with this. 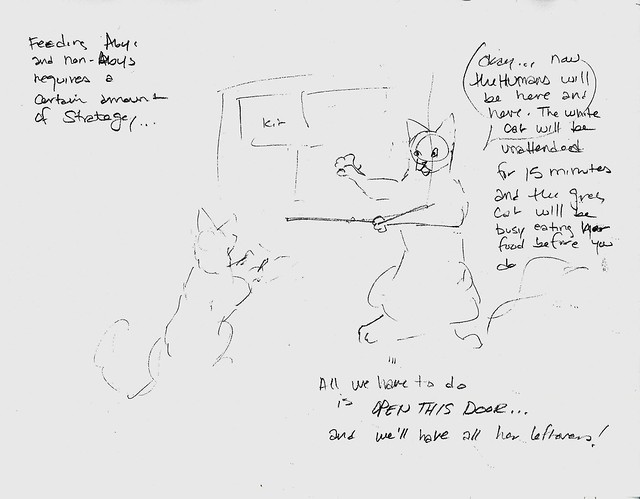 This was an idea about the logistics of feeding. At the time, Jake and Angel lived with Tessie and Kylie. Kylie was a slow and picky eater, while Jake scarfs down his food and looks for more. He had to eat UT food, and we didn’t want him eating regular food, so he ate in the spare bedroom. Angel ate in the bedroom, because she also needs UT food, and also because Tessie would bully her and keep her from eating. Tessie and Kylie could eat together, because Tessie wouldn’t try to steal her food.

We have a similar system here in Sweden, because of eating styles and special diets. Jake doesn’t like raw and still needs UT, and he eats in the bedroom. When Alfred and Logan were kittens and ate the same food, we fed them in the Kitten Room and Angel on the cat tree. Pyret used to need eat a renal/hepatic diet, and we fed her on her chair. Angel never tried to eat Pyret’s food, so that worked. When Logan was still eating kitten food after Freddy was neutered, we fed Logan in the Sturdi Shelter and Freddy ate alone in the Kitten Room, but now that the Suprelorin has kicked in, they are back to eating the same food. Between the voracious Aby appetite and the special diets, feeding our cats is a bit like that old riddle about the farmer and the fox, goose and bag of beans!

One thought on “Aby-a-Day- 27 March: Logistics of feeding (Cartoon Tuesday)”