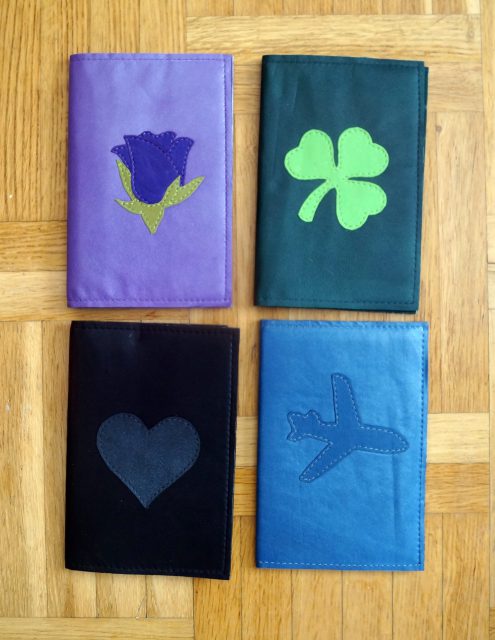 Back in 2015, I posted about the EU regulations about microchipping and importing domestic animals. So I thought my non-EU readers would like to see what the pet passports look like. The LunaTicks all have leather passport covers to protect them, made by the same woman who made their harnesses, Arja’s Art, and they are not only gorgeous, but they match each cat’s harness, and the icons on the cover match those on each cat’s silver nametag. 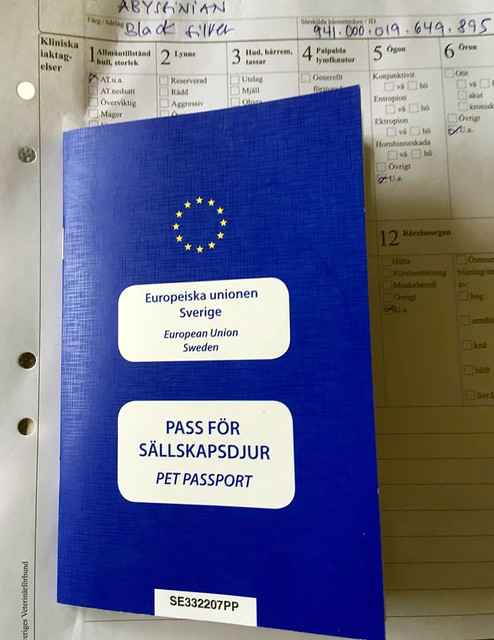 Here is Alfred’s passport as an example. On the outside, the pet passports look a lot like a passport for humans, but they are slightly larger, and the cardboard is much thinner. There’s also no RIFD chip. 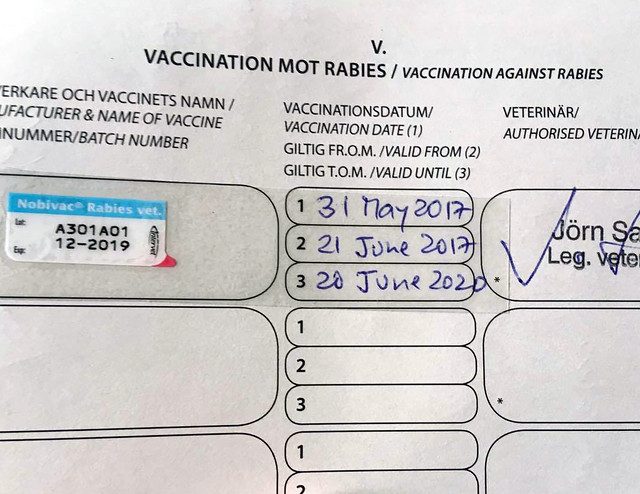 All the rabies shots are recorded in the passport. Jake’s and Angel’s passports also have their vaccination records and rabies blood titres since they were imported from the States. 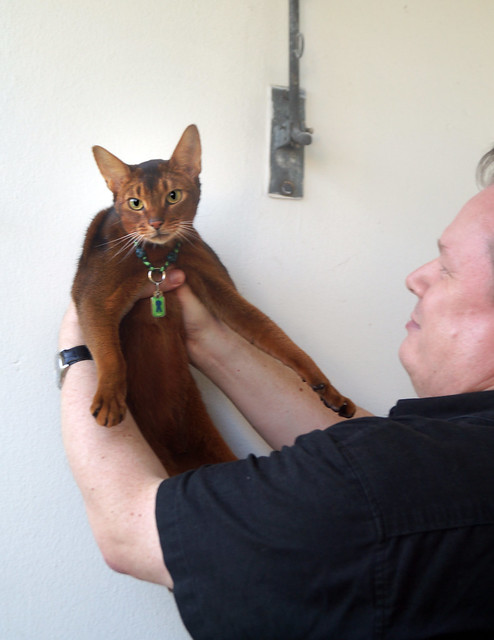 The passports also have a space for an optional photograph of the named cat, so of course I had to make sure that everyone had a proper passport photo. We started with Jacoby. Björn held him up while I took the photos. We used the plain white background of our balcony wall. 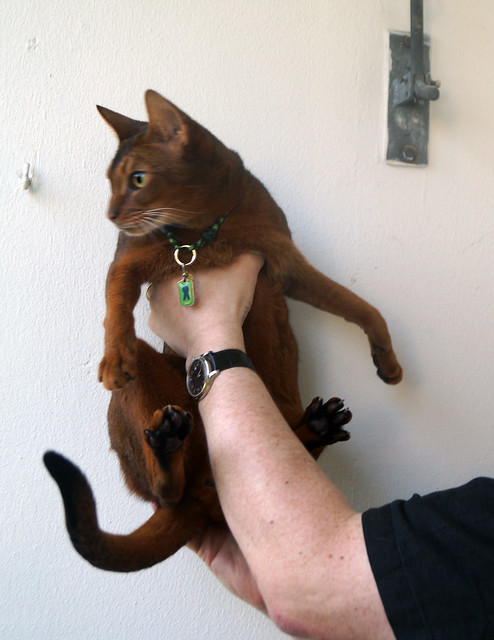 First he was very squirmy. If I wanted a photo of his toes, it would have been awesome. 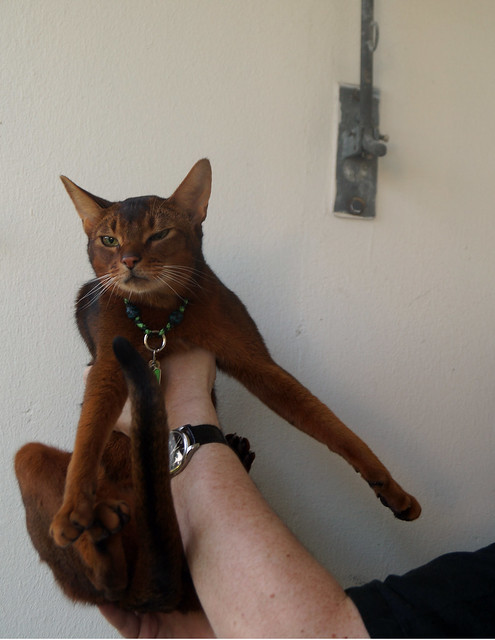 Okay, slouching is worse. You look like you have no neck! 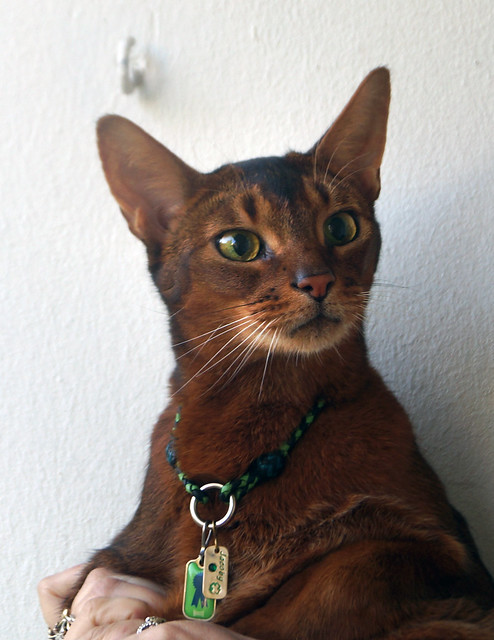 But finally Jake started to get his act together, and we were able to get a decent photo. 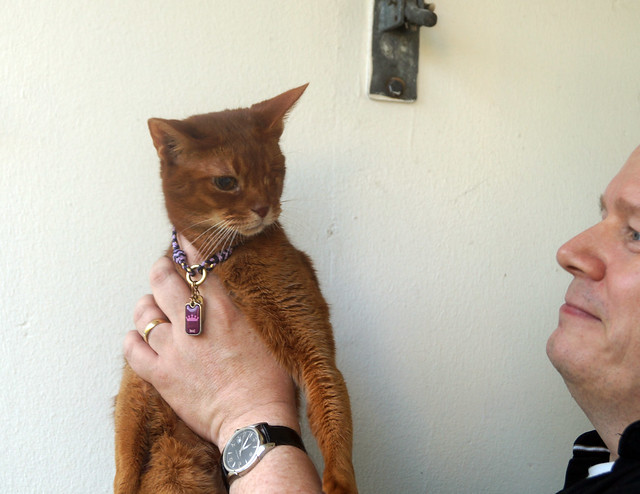 Next it was Angel’s turn. 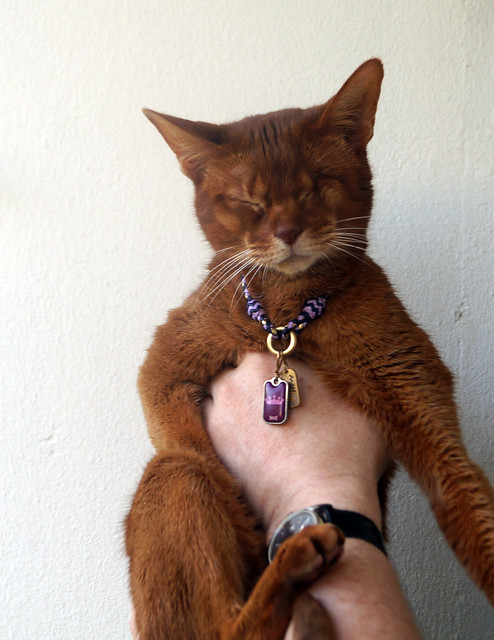 Seriously, Angel? Seriously? You only have one eye as it is. Don’t close it! 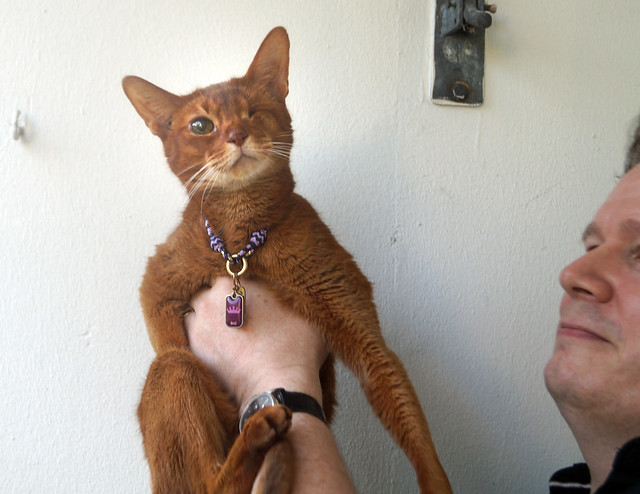 But eventually she, too, settled down and we got a decent shot. 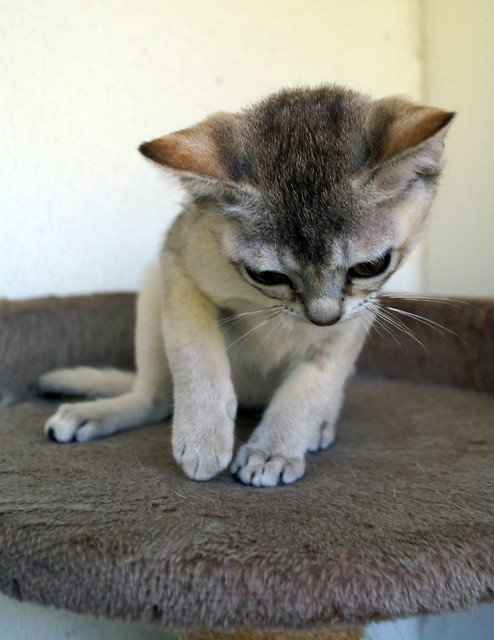 A year later, when Logan and Freddy joined our household and got their passports, it was passport photo time again. 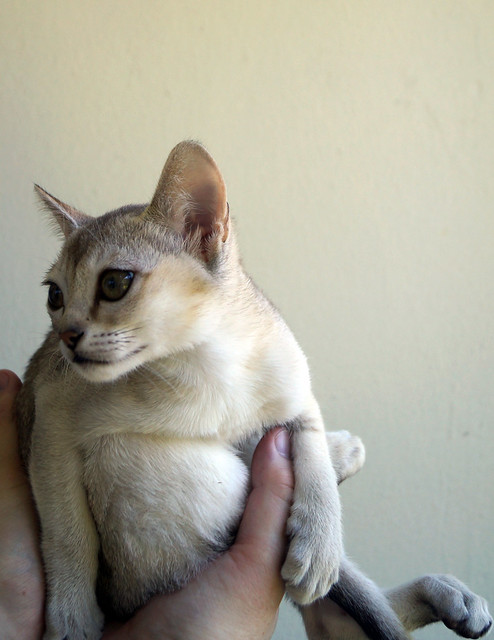 Even though he was just a kitten, Logan was as “good” at posing as the big Abys were. 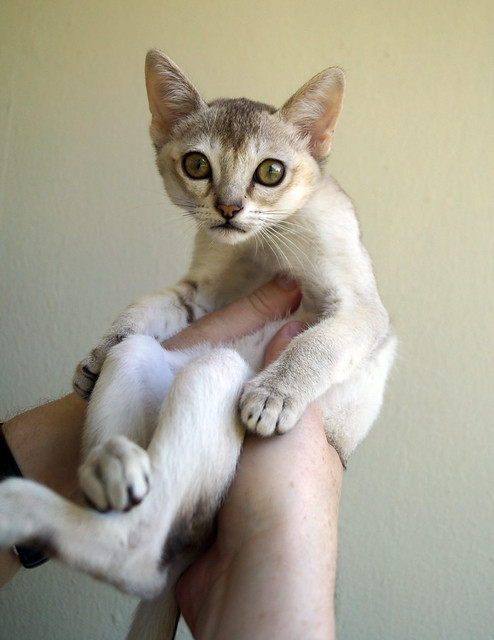 But finally, he too managed to give me a decent pose. 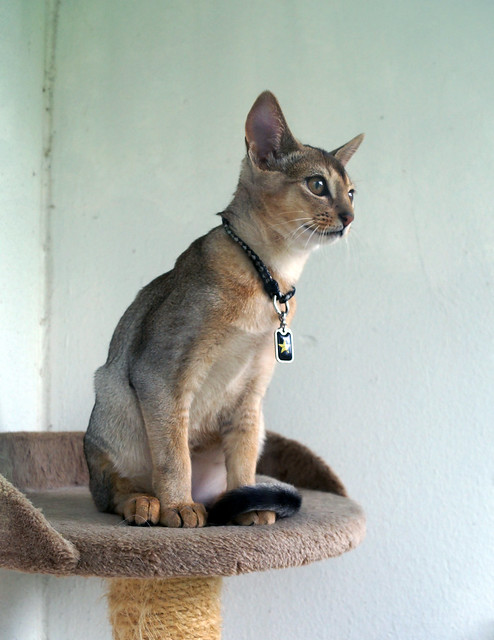 Surprisingly, Freddy was a natural. 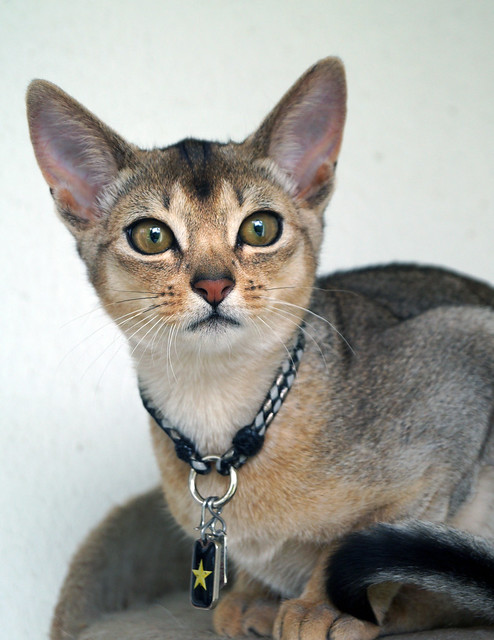 I actually got a few usable shots, all without having to be held. 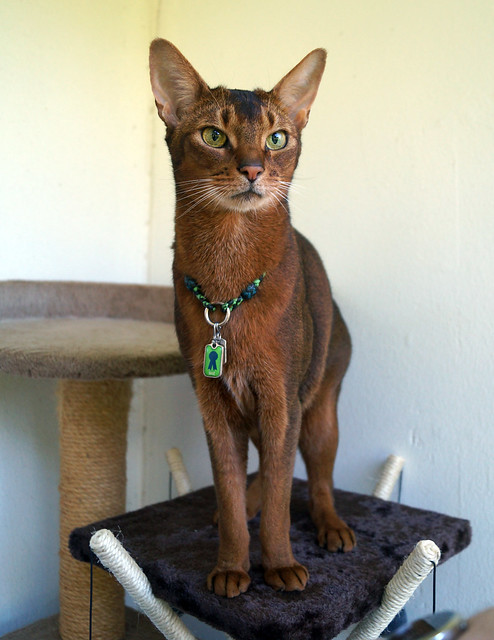 Of course, while I was taking the kittens’ passport photos, Jake came and showed them how to pose properly…Not that he did that when we were actually taking his passport photo! 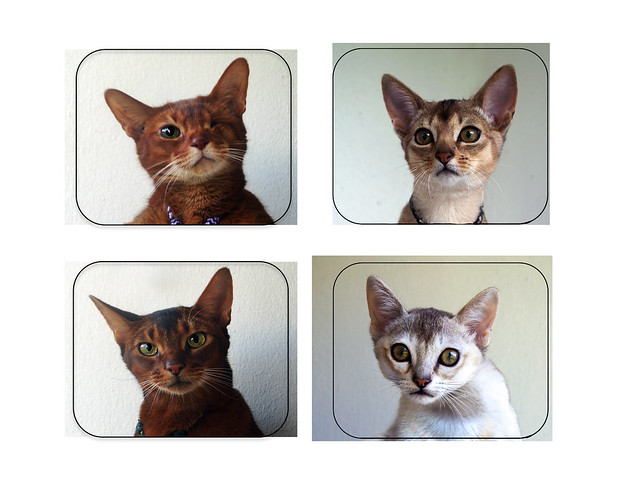 These are the four photos we ended up using.

And here they are in the passports themselves.

All the entries are covered in clear self-adhesive plastic to prevent alterations. I put some over the photos and “signatures” as well. 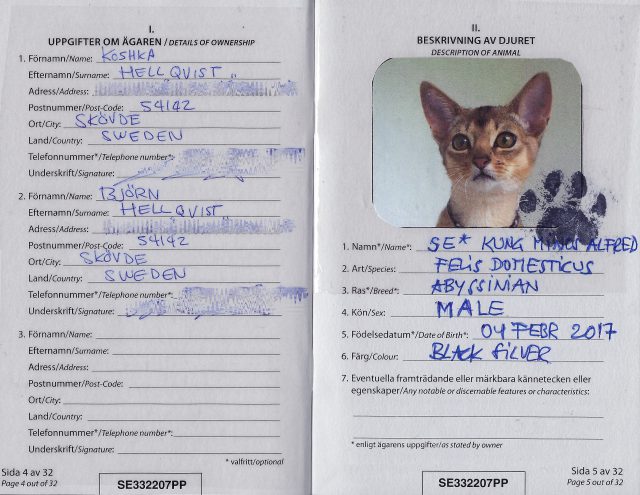 I wasn’t sure about using kitten photos on the passport they’ll use for the rest of their lives…but I guess it will be okay.

I have rubber stamps for Angel’s and Jake’s pawprints, but Freddy and Logan haven’t gotten theirs yet…so these are their actual paws! I guess that makes up for using kitten photos. 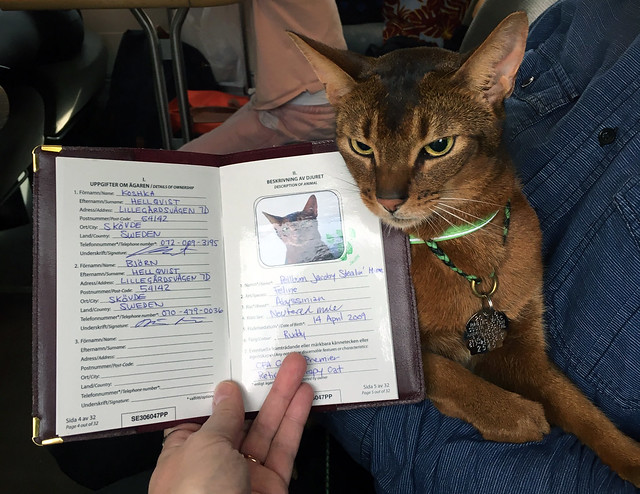 But at the end of the day, this is what matters. A cat and his passport, riding the rails on the way to Finland for his first international show. 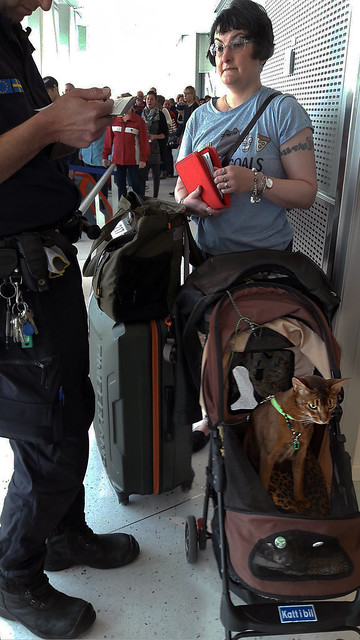 (And in case you’re wondering…yes, they really do check them when you cross a border!)