Alfred was so lonely after Logan went to the Djursjukhuset in Jönköping. 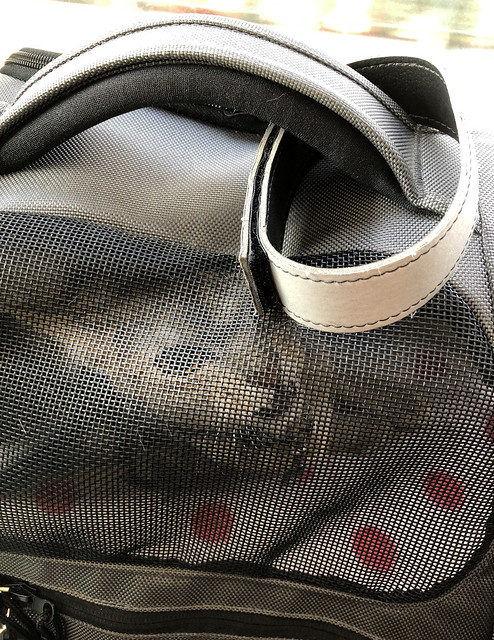 I got a call from the vet in Jönköping on Friday the 13th, of all days, that Logan was going to die. He had a surgical biopsy of his mesenteric lymph nodes. In his belly, they found gelled fluid indicative of FIP. After Pyret, and the way all the cats paid their respects to her, I knew I couldn’t let Logan die without saying good-bye to his brother from another mother. 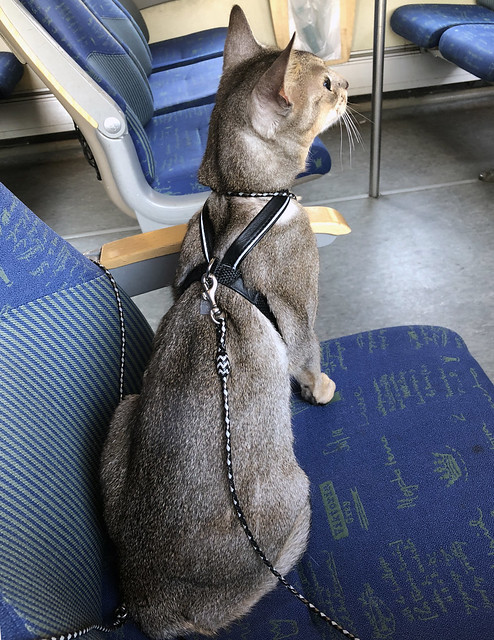 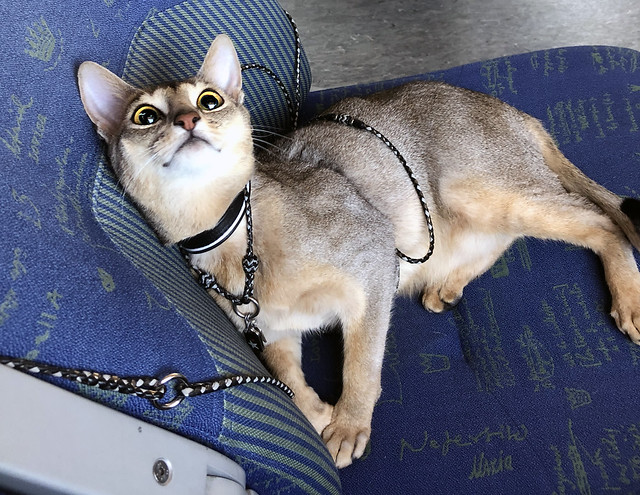 So I bundled Freddy up and took him with me to Jönköping to say good-bye to our Logan. 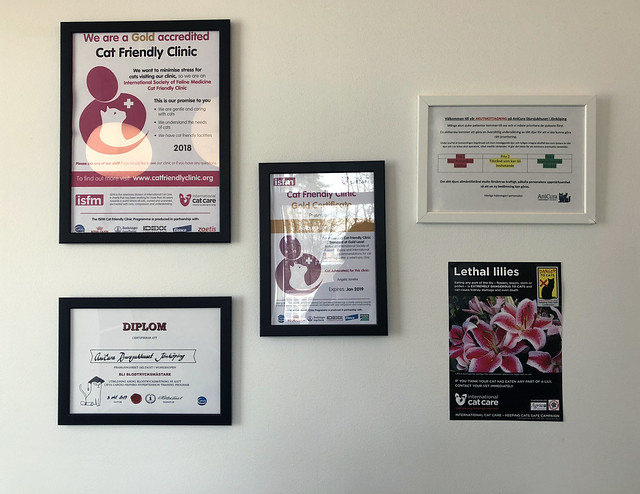 We had to wait in the cats-only waiting area first, where there were lots of certificates announcing how cat-friendly the hospital is. 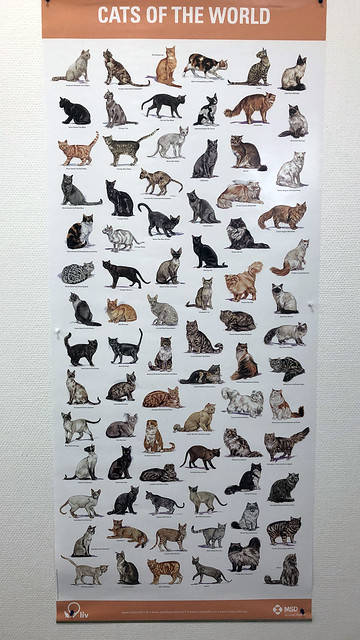 They also had this awesome poster showing Cats of the World. The Abys were much better than on the last poster I saw in a vet’s office…and there is a Singapura on it, too! 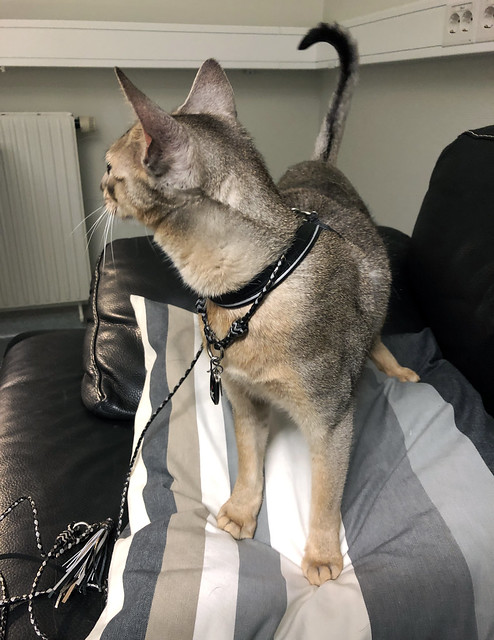 Eventually, we were taken to a room. Not a hospital room, but an office-type room, with computers and a comfy leather sofa. 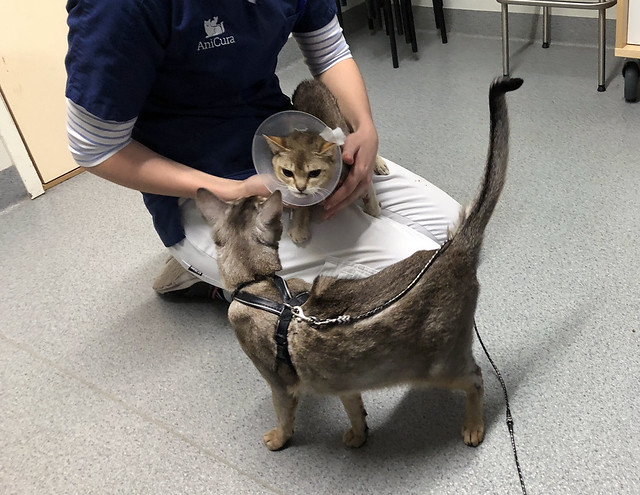 The vet tech brought Logan in, and Freddy was right there to greet him. 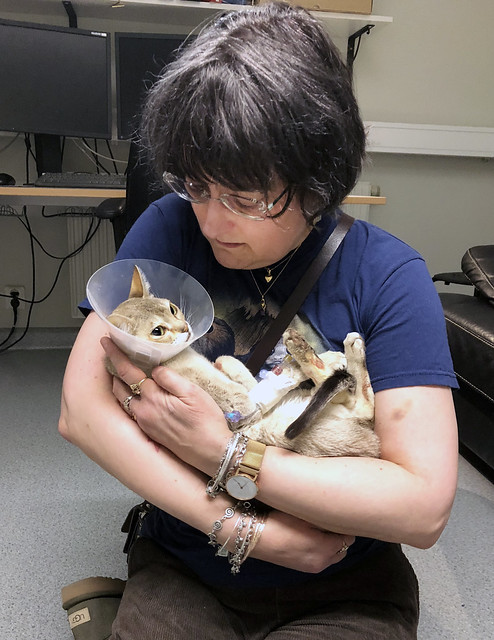 Then I cradled my baby and cried over him. 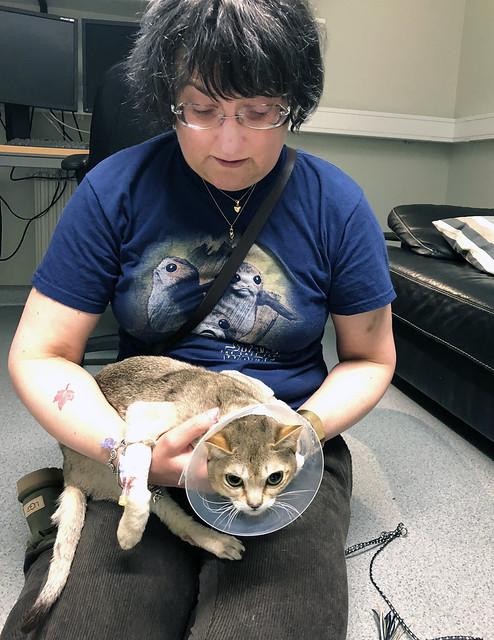 Being on his back was uncomfortable for him, so I held him turned over. I wore my Porg T-shirt because Logan was my little Porg. 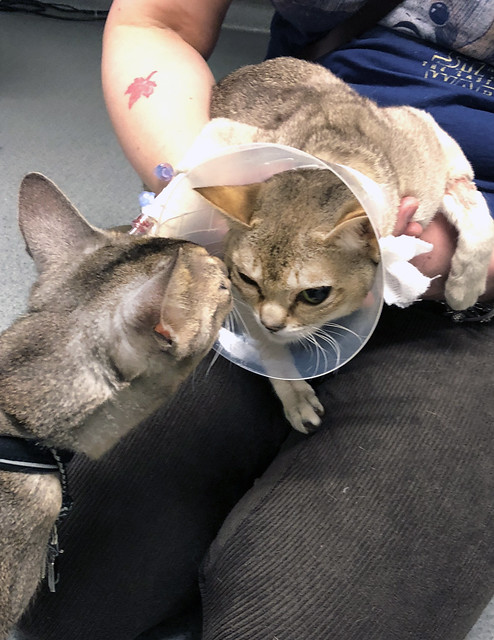 Freddy didn’t care that Logan was wearing the Cone of Shame. He was just happy to see his brother from another mother. 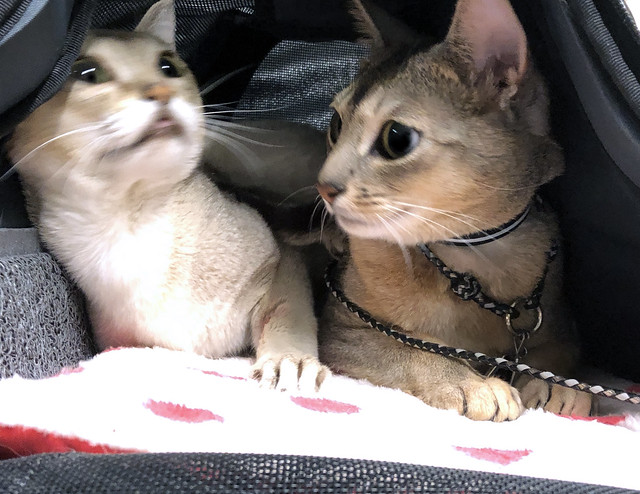 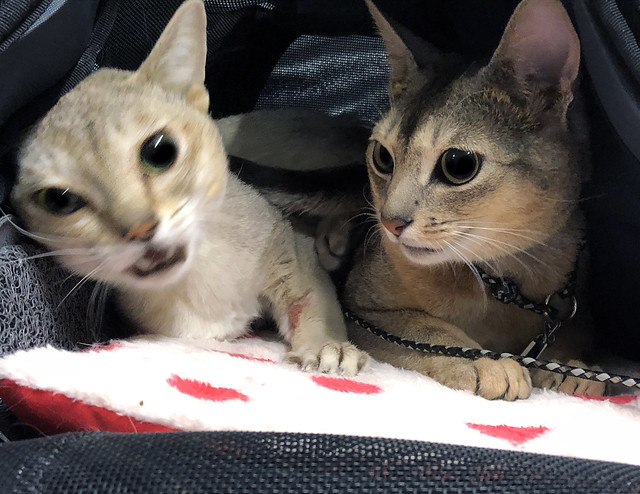 Logan struggling to get into the carrier with Freddy after the vet tech took off the Cone of Shame. I have no words to express how much I miss his love of Freddy. And his funny faces. 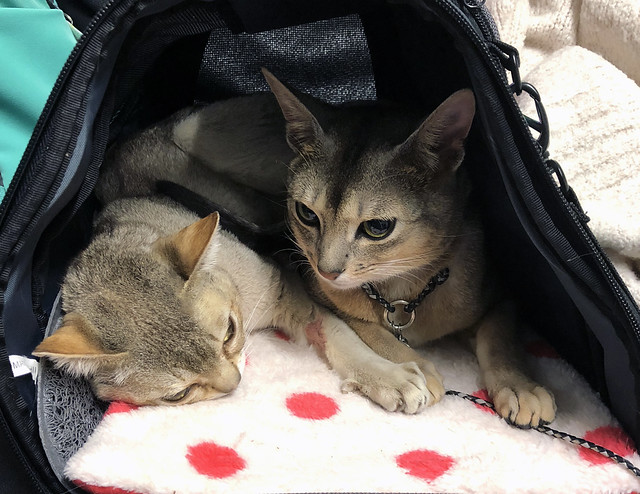 We had to wait a while before it was our turn. We didn’t mind. 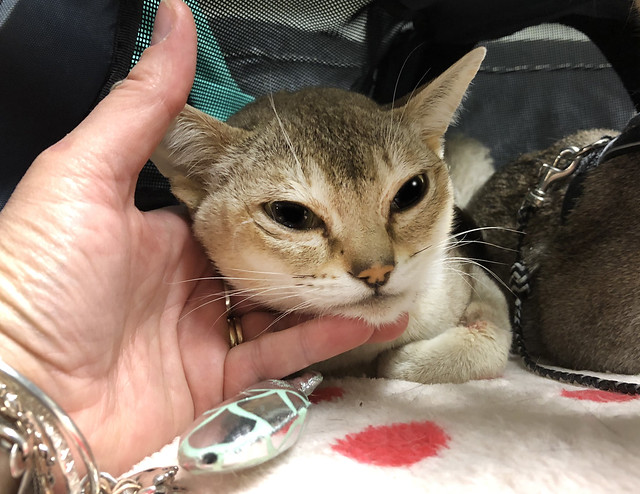 Logan was so weak and tired. He had had surgery, blood tests and so much else done to him those last few days. But still he hung on. 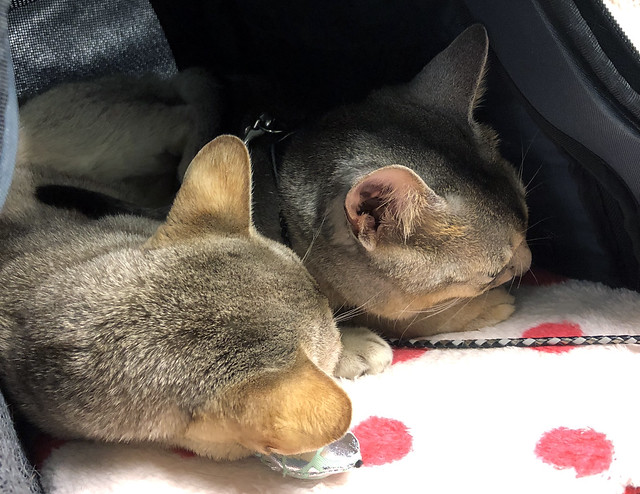 He was happy to be with Freddy. 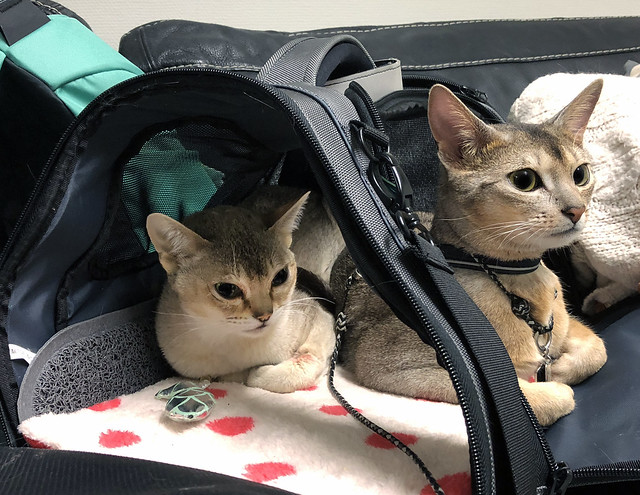 Finally, the vet tech came back with all the syringes. Because the doctor was tied up with an emergency, she was going to administer the drugs. 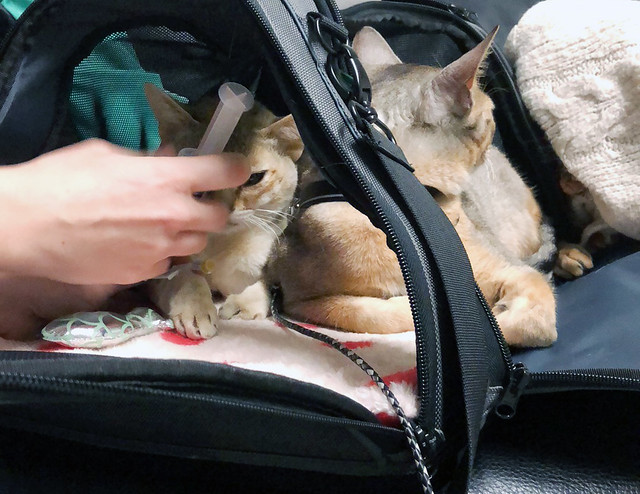 She flushed out his port with saline before starting the euthanasia procedure. I didn’t take photos of that. I wouldn’t normally have taken as many photos of all this as I did, but Björn was away that weekend on his Hemvärnet exercises, and he couldn’t be there to see Logan that last time. So I took these for him, and also for Lisa, his breeder. 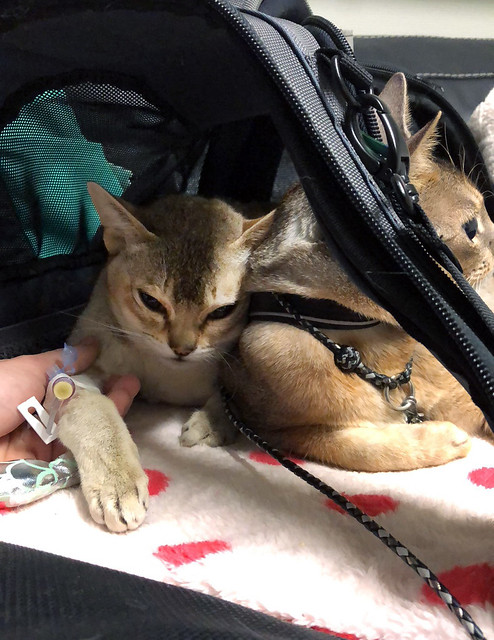 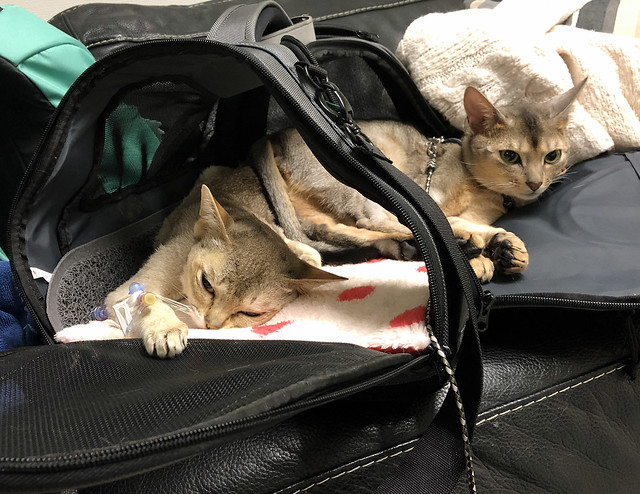 He started receiving the sedatives first. While they started to work and make Logan drowsy, Freddy was right there with him. 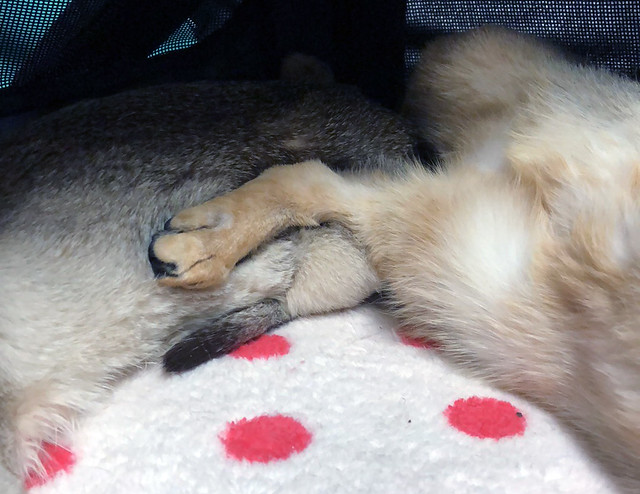 Brothers to the end. 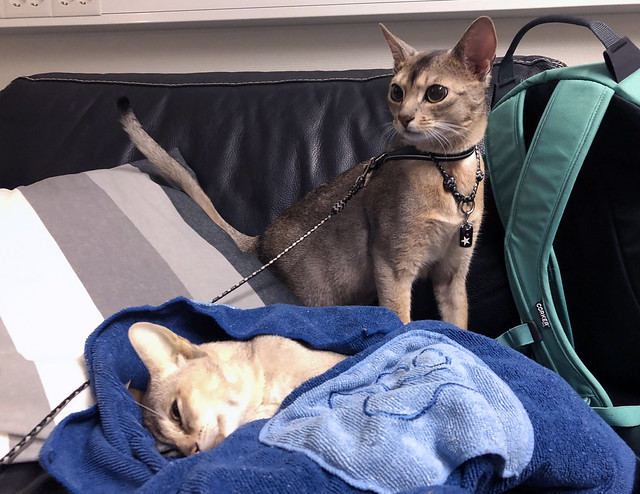 Finally the last needle was given, and Logan left us. They gave us a blue towel to wrap him in, and Freddy said his last goodbye. 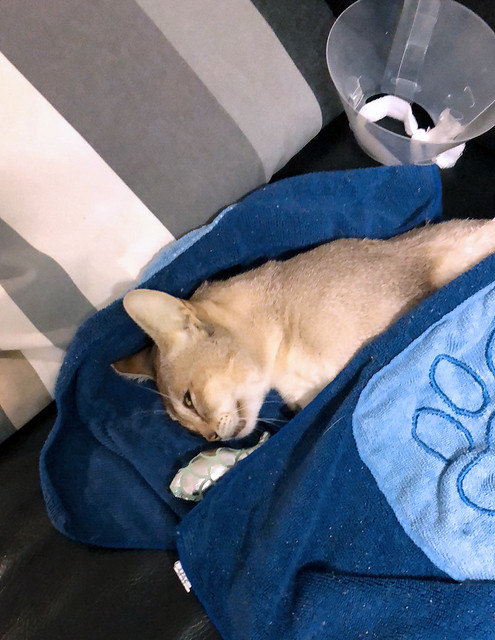 I hated to leave him alone in that empty room, so I left one of his favourite fishes with him. It’s been just a little over a week since he died, and Freddy and I are so lost. He was our little dude, and we miss him.