Lorelai has been with us for a week now, and it’s like she’s always been here. She’s feisty, trusting, playful, curious and just…perfect. Jacoby growls at her, she doesn’t care. She pushes Angel and Jake away from their leftovers if she’s still hungry. She holds her own with Alfred even though he’s nearly 10 times her size. She’s had no litter box issues, no eating problems…nothing. She just integrated herself right into the cat family. 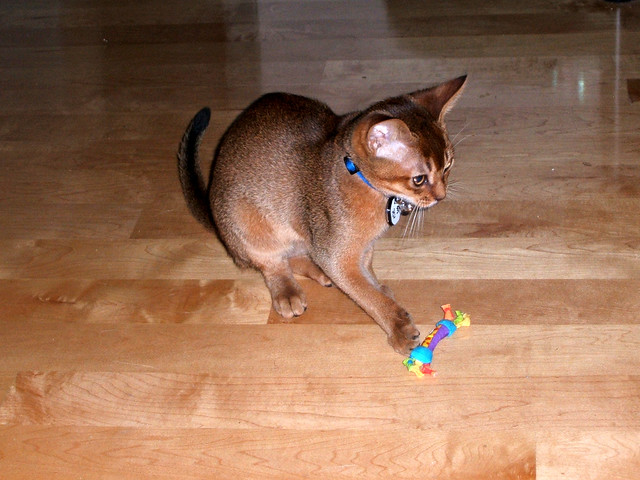 Kind of like another Aby kitten I know. Gun-Hee was a lot like Rory. Jake, Freddy and Logan were somehow not as easy. They all had giardia as kittens, and, I don’t know. It just felt like it took a lot more work managing those three as kittens compared to Rory and Gun-Hee. 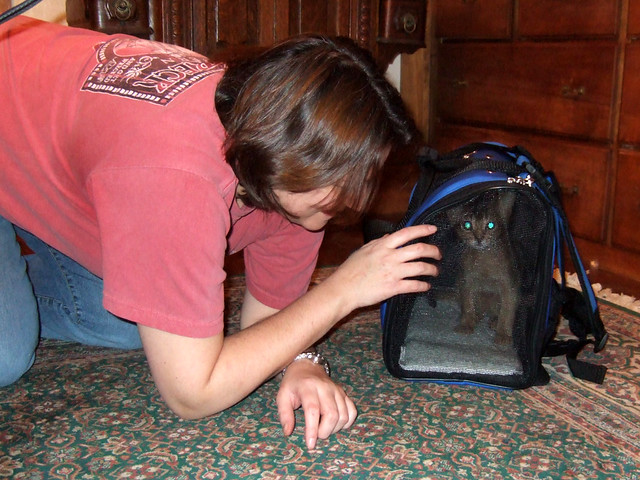 We got Gun-Hee on 15 December 2006, the day before he turned three months old. 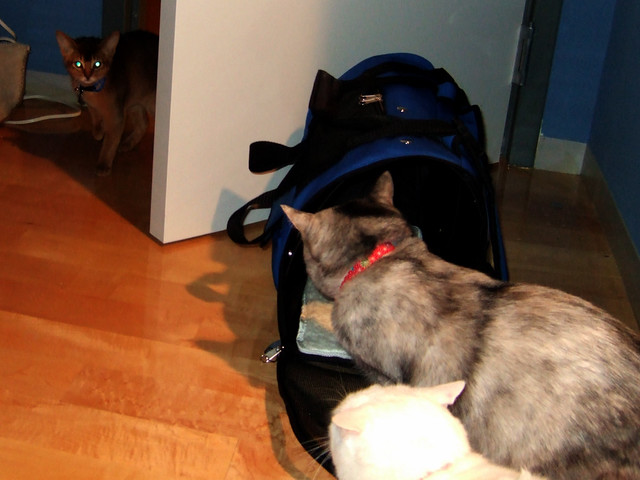 We tried to keep him separated from Tessie, Kylie and Patrick when we first brought him home. That lasted about five minutes. He would have none of it. The older cats were…not the most welcoming at first. 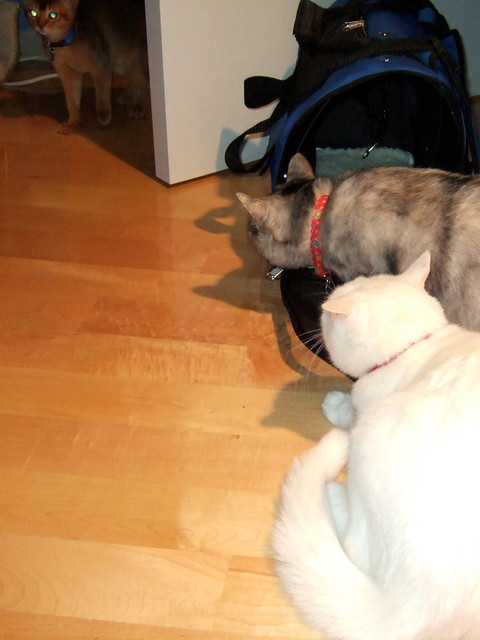 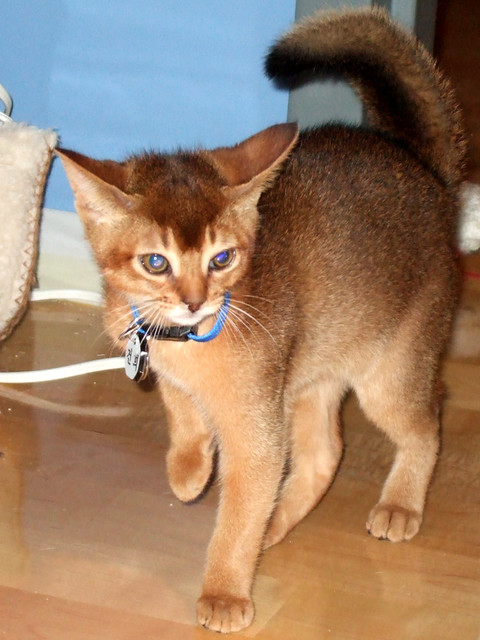 He just stood his ground. 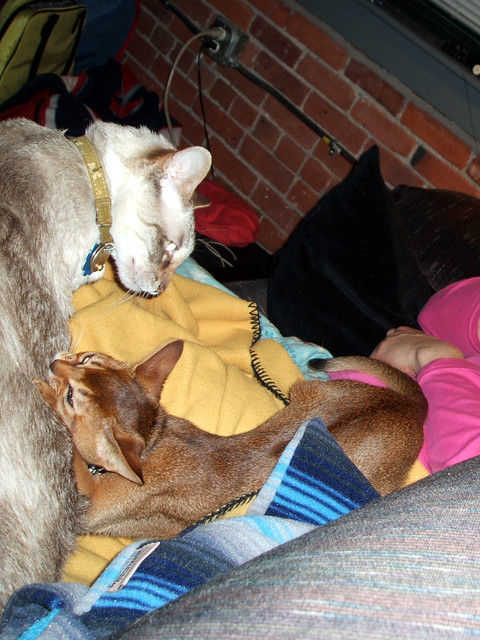 For some reason, Patrick was his particular favourite. Patrick was still missing Harri, who had died four months earlier. 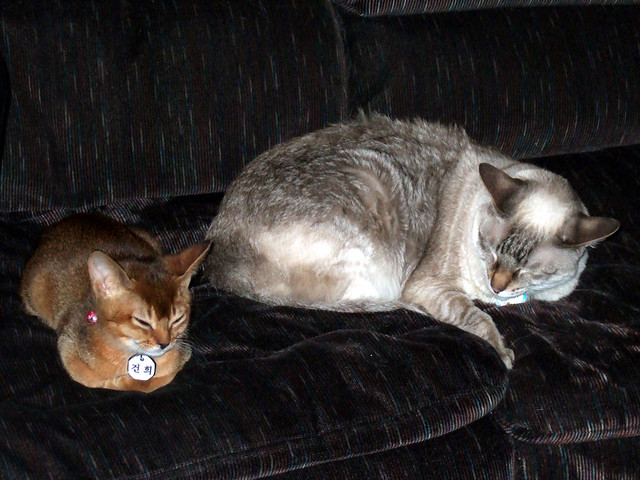 Gun-Hee eventually wore him down. 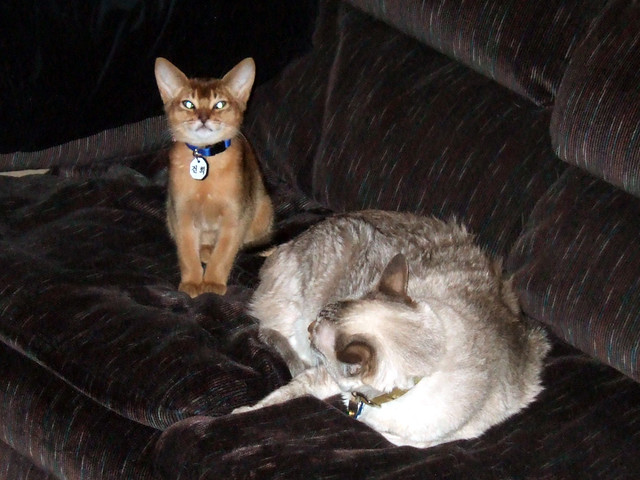 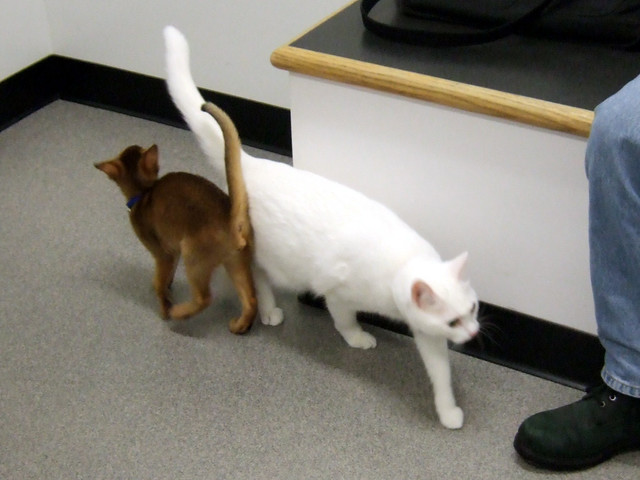 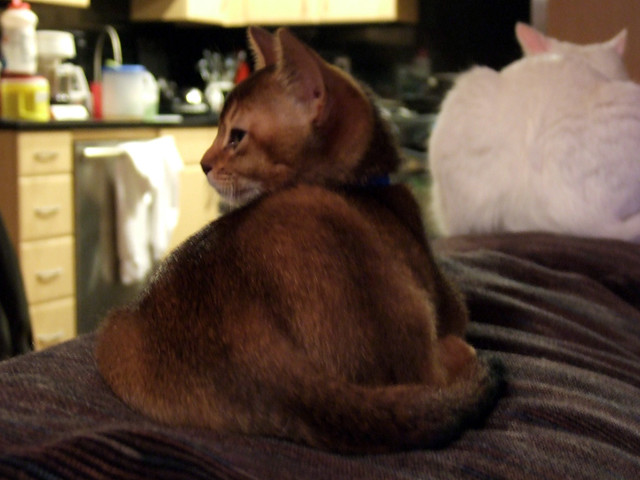 Kylie was the closest to him in age (she was only 17 months older than him), so they also became friends rather quickly. 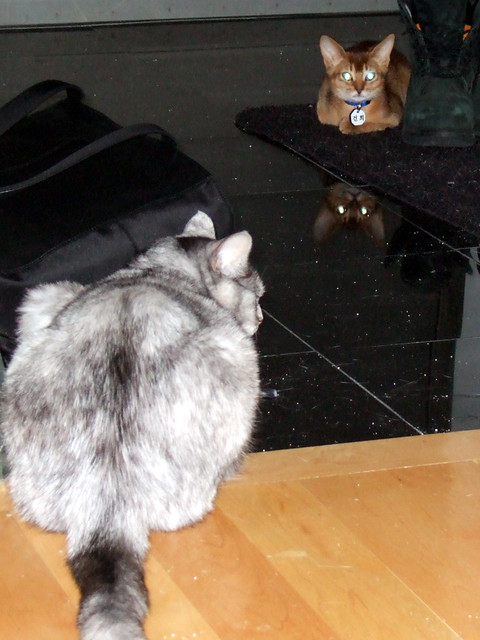 Tessie was a little slower to thaw. 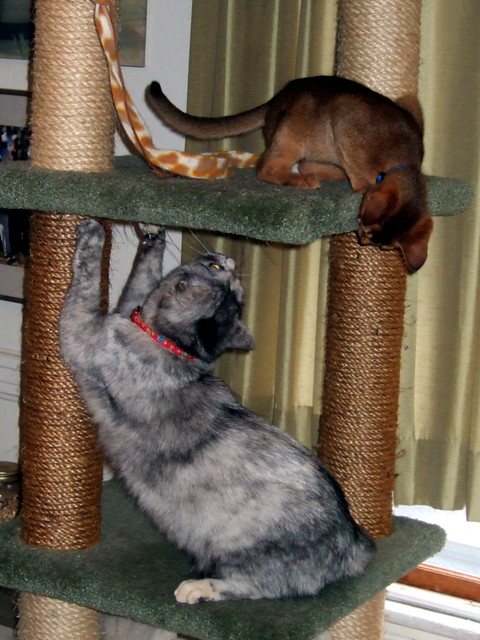 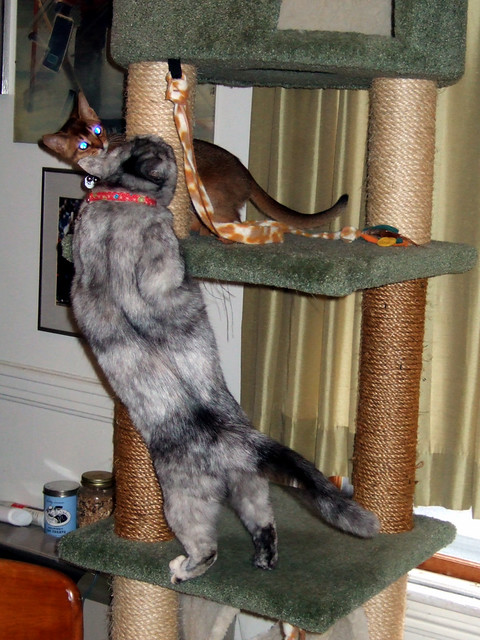 But Gun-Hee eventually melted her, too. 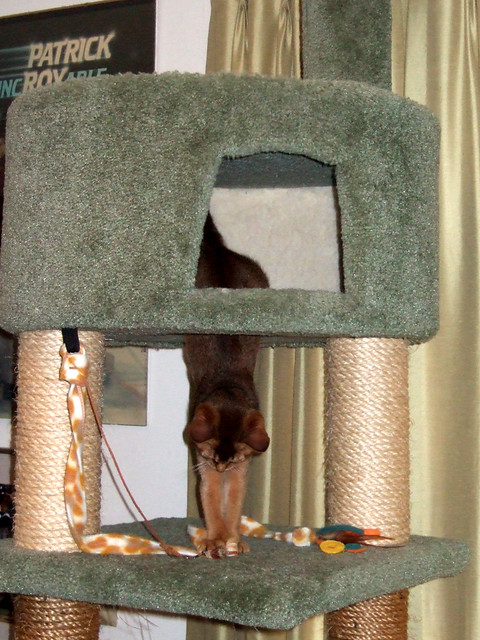 He also loved the floor-to-ceiling cat tree in my old apartment. 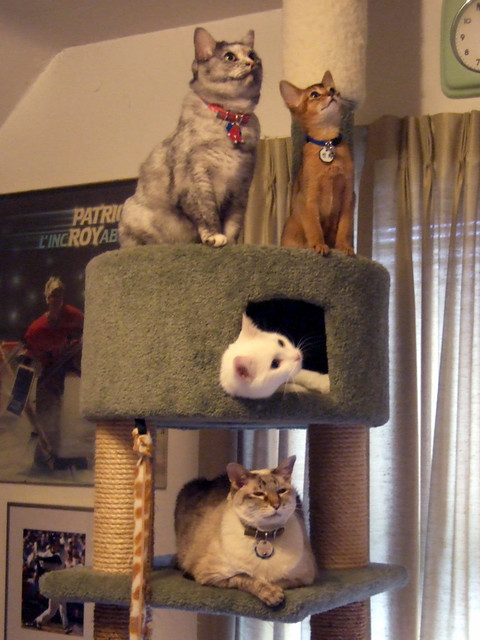 He loved being on the top, epsecially. 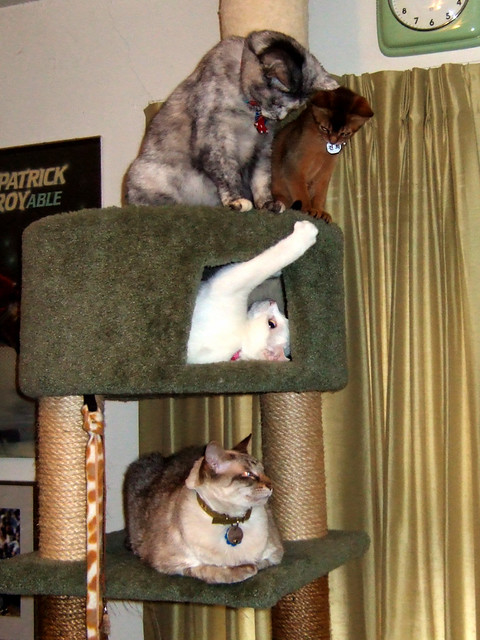 Rory takes on that same floor-to-ceiling cat tree and, if she falls off, she just climbs back up. As I am typing this, she’s at the very top of it, trying to touch the ceiling. Gun-Hee was like that, too. 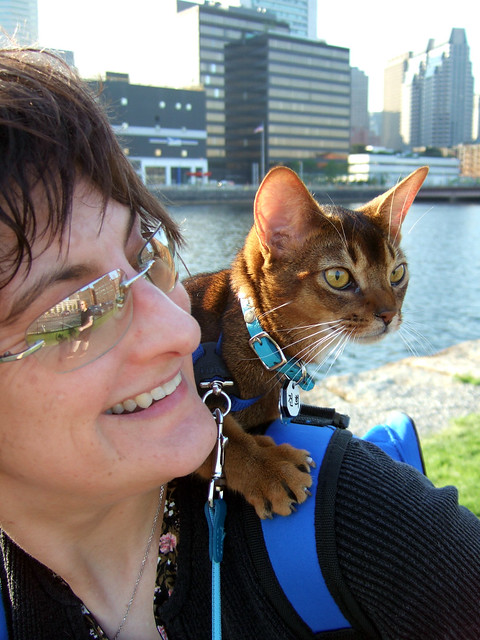 Another thing they have in common is shoulder-riding. Neither Jake, Angel, Freddy or even Logan have ever been able to stay on a shoulder. Jake is particularly bad at it; I say it’s like he has magnets on his feet that are the opposite of the ones on people’s shoulders and he just can’t stay on. It’s nice to have a shoulder-riding kitten again. 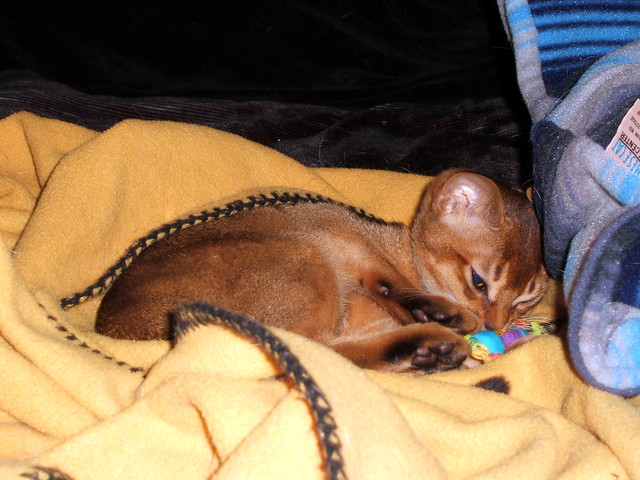 And Gun-Hee could be cuddly, too. Just like Rory. It’s a little eerie how much she reminds me of him.