We have a Singapura in our family again! 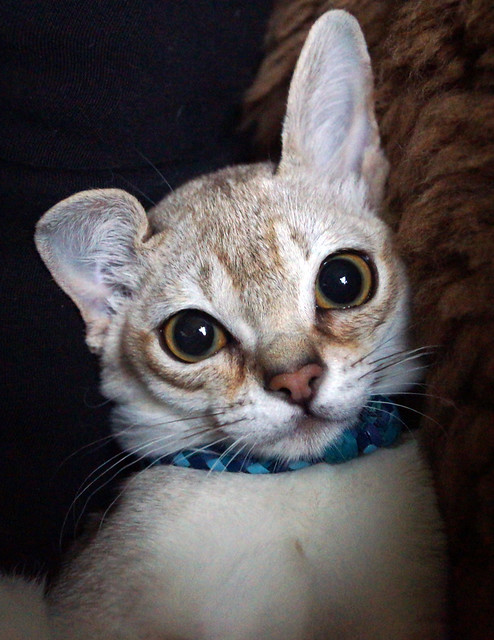 As you saw in yesterday’s post, I went to Stockholm to collect Joy Minimali*PL, called Izaak. 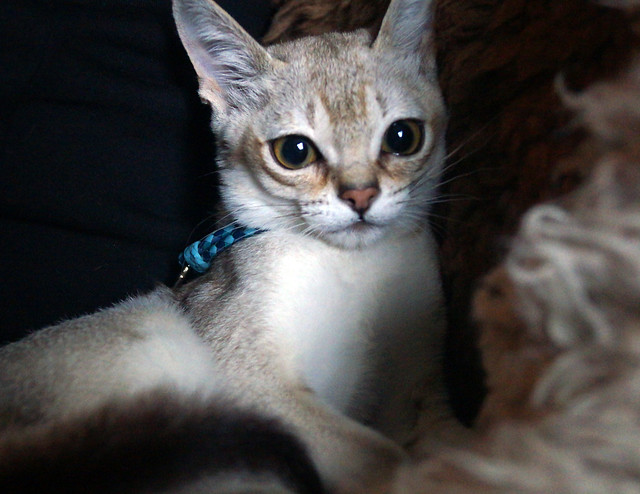 I decided on the name Izaak for him (Zak for short, of course) because one of the Polish words for “joy” is “zachwyt.” Which is close enough to Zak for me! I didn’t like any of the variations of Zachariah…but when I discovered that Zak could also be a short form of Isaac/Izaak…well, it was a no-brainer. It’s also has a completely sound from all the other cats’ names, which is good. I had wanted to have a cat named Lennie (after Det. Lennie Briscoe), but with AngeL, ALfred, Lorelai, and Logan, it was a lot of L’s in the family aLready. Besides, with him already being named Joy, it seemed fitting.

Actually getting Zak was an experience. He came to us from a Polish breeder who happened to have two boys available in June. There were no Swedish kittens available…so we decided to go abroad. At first, we thought we might go to Poland to get him, but the timing didn’t work out for us to travel. Anna regularly ships kittens worldwide, so she sent him to us via air cargo. I’d done this before, when I got Tessie, but she was only sent from Portland, Oregon to Boston, not from another country. I thought it was hard to find the cargo area at Logan Airport…but as you can see from the above map, it was quite an adventure collecting little Zak! 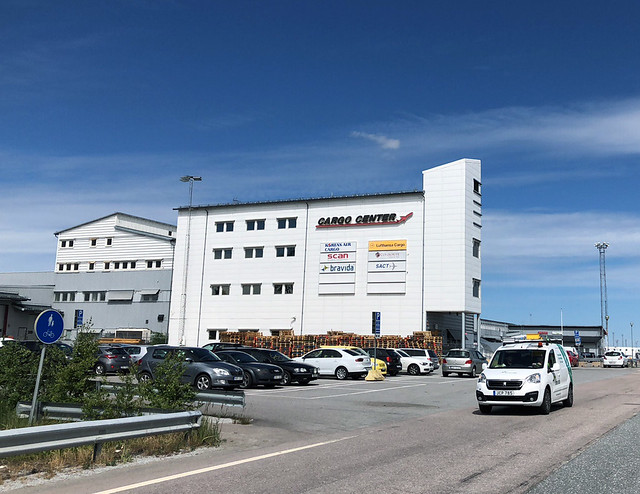 First I had to get from Skövde to Stockholm. Booking a train to Stockholm is a bit like booking a flight, depending on when you choose to travel, the trip can cost as little as 195kr (around $22) and as much as 885kr (around $100) or more. You also reserve your seat, and seats at tables are very popular. Seats at tables in the (very limited space) pets-allowed cabin are even harder to get. Also I had to take into account that Zak’s arrival time was 09:30. So I booked a trip that left Skövde at 07:12. As most of you know, I am not a morning person and don’t really wake up until at least 10:00. I had to get up at 05:30 in order to catch that train. From Stockholm Centralen, I then had to take a bus (a 45-minute trip) to Arlanda Airport Terminal 5.

Then I had to take a Stockholm city bus #583 out to the Cargo City stop (second-to-last on the Märsta line). The bus drops you off at at one of those little shelters that looks like it’s in the middle of a quarry next to a prison with some parcel warehouses off to the side, and there’s absolutely no indication of how one might find the Cargo Center (nor was there a clear walkway). Luckily, the cargo place had called me to tell me that they had a cat for me whilst I was on that second bus, so I had their number and called them to ask how one might walk to their location. 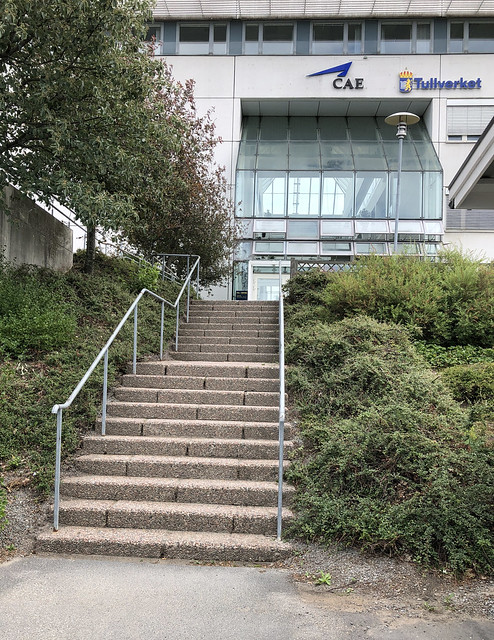 But here’s the really fun part. Once I managed to find Cargo City, I had to take Zak’s papers and passport and take them to Tullverket (Customs) to be reviewed, approved and stamped, and then go back to Cargo City to actually collect Zak. One would think, this being a common thing to need to do (pick up paperwork, go to Customs, and then come back and get your cargo), that the two buildings would be conveniently located somewhat adjacent to one another. But as you can see from the above map, you would be utterly and completely incorrect. I had to take the 583 bus back to Terminal 5, and from there take an airport shuttle to where the Customs building was located. And as you can see, when the bus dropped you off, it wasn’t immediately obvious where the entrance was. 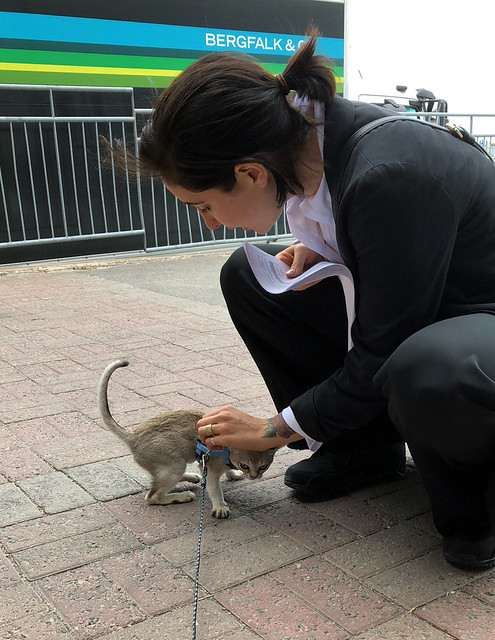 At Customs, whilst waiting in the queue, I met an Australian woman, Zia, who was on the same mission I was, trying to collect a large suitcase sent to her from home. She hadn’t yet been out to Cargo City; she went straight to Customs because her emailed instructions were vague. She still had to go out there to collect her suitcase, though. Knowing what I did about finding Cargo City, and needing to go back there myself, I waited for her so we could go out there together. It made the return trip so much easier! 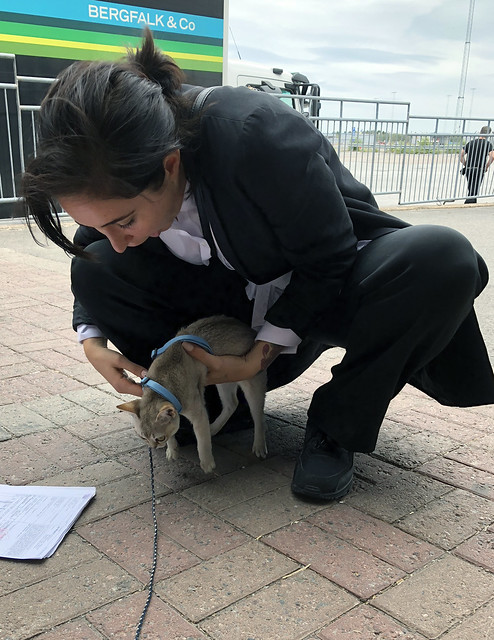 And, as it happened, Zia loves cats. She was completely charmed by little Zak. 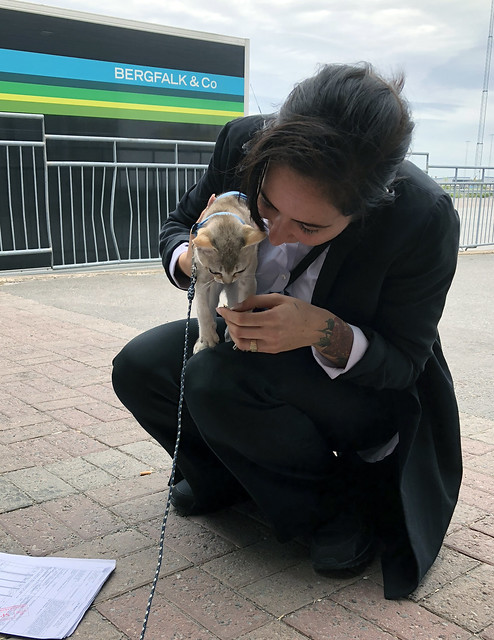 We ended up going back to Stockholm Centralen on the Märsta train, which turned out to be so much faster and easier than taking the airport bus. Definitely need to remember that the next time! 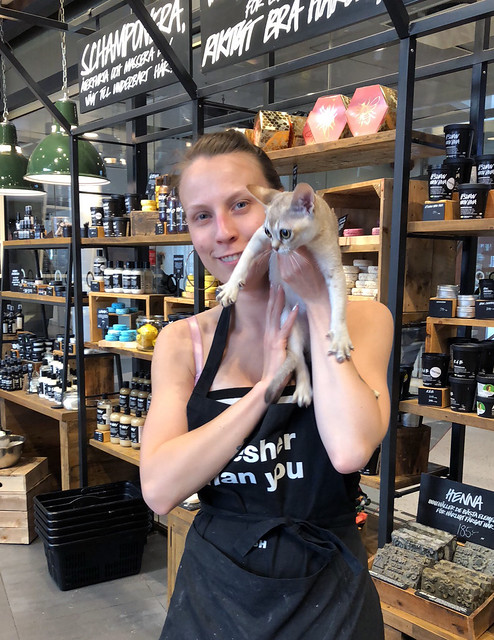 Back at Centralen, Zia and I parted ways with a hug, and I had about an hour to kill before my train left. So, I grabbed lunch and did a little shopping. 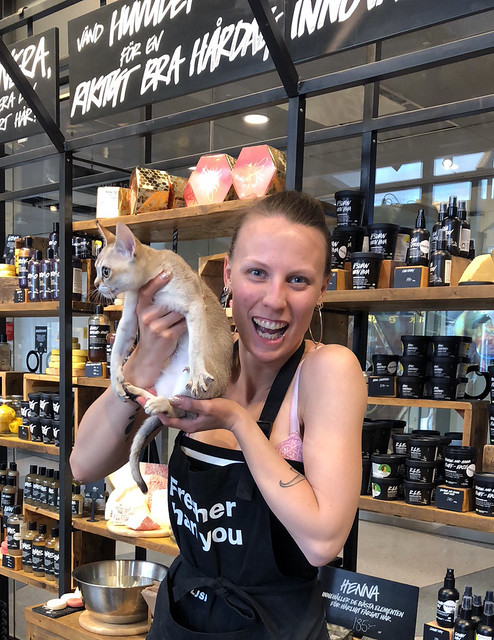 Zak was a huge hit at Lush! Both the shop clerks and customers just loved him. 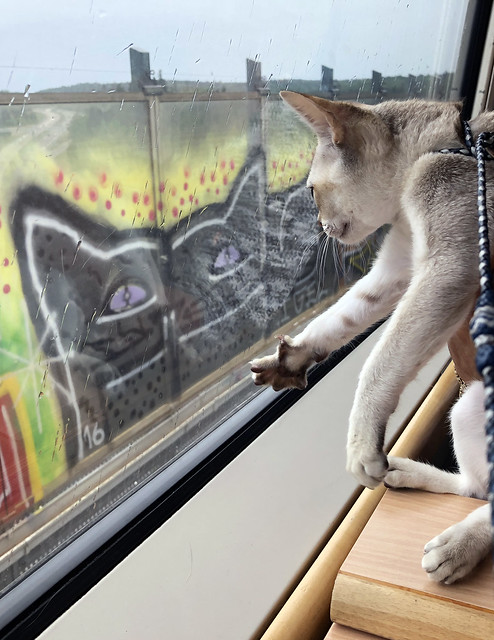 We made friends on the train, too. An older woman from Göteborg and a guy from Romania were at our table, and we talked most of the trip back to Skövde. So much for Swedes not talking to strangers! The woman was the one who started talking to both me and the Romanian, and I am glad she did…it was a fun conversation. 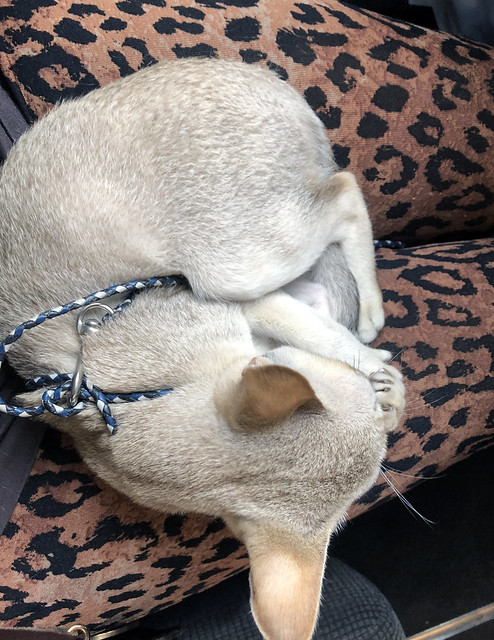 Zak slept in my lap for most of the trip. Which was fortunate; he was going to need to be awake when we got home and he met his new clan. 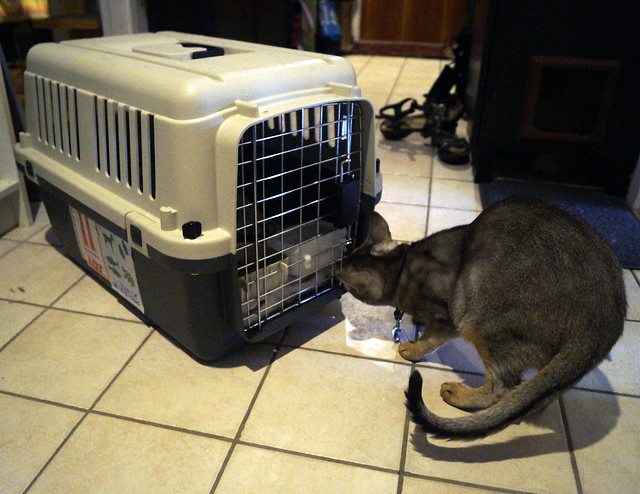 Alfred was the first to greet the carrier. 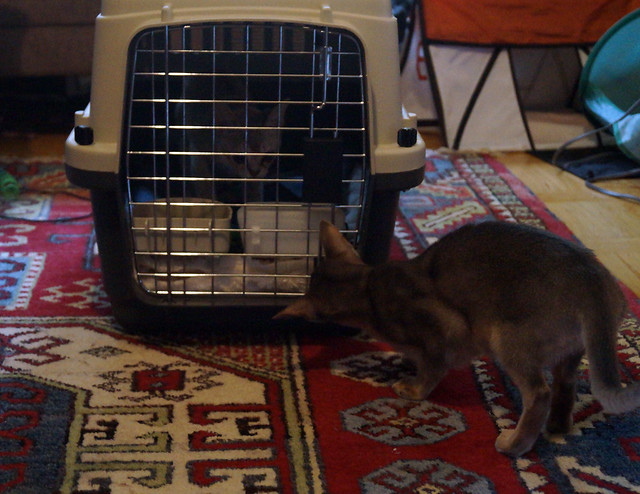 We took it into the living room and Lorelai was next to see who was inside. 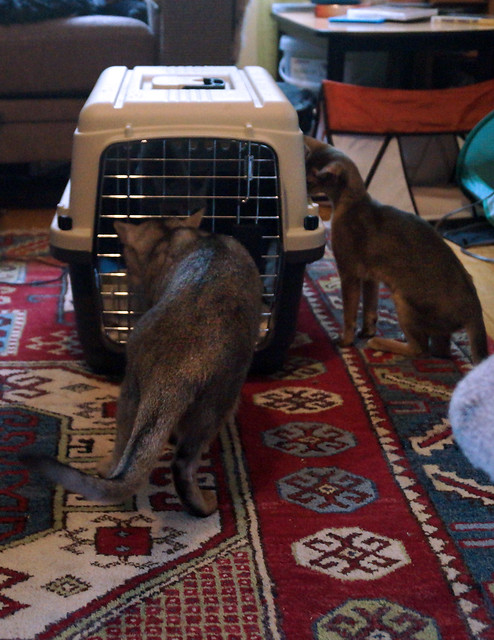 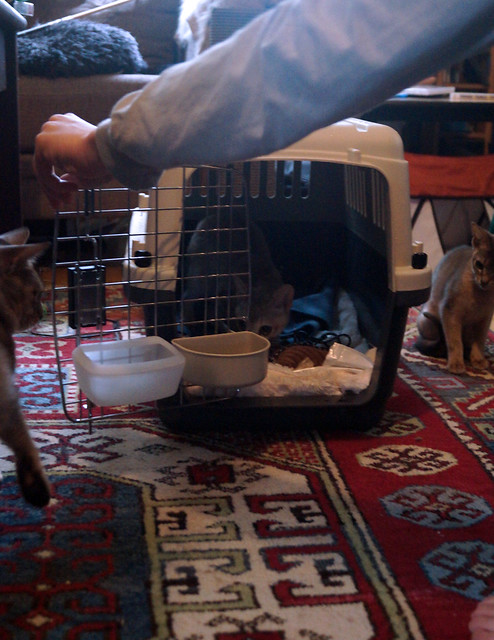 We let the youngsters sniff a bit before opening the door. 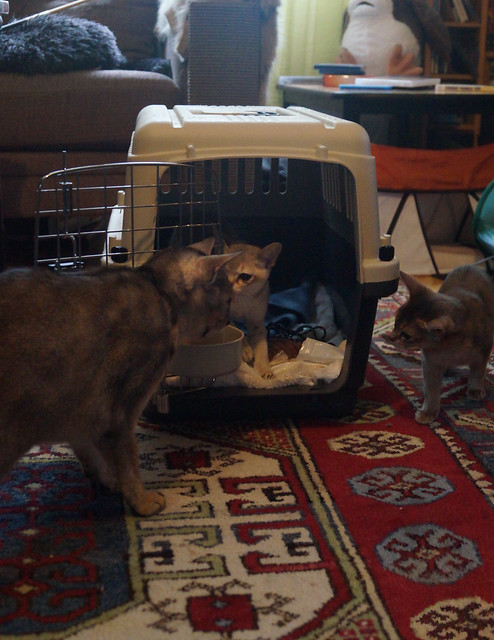 I wonder what Freddy thought when he saw a Singapura who wasn’t Logan? 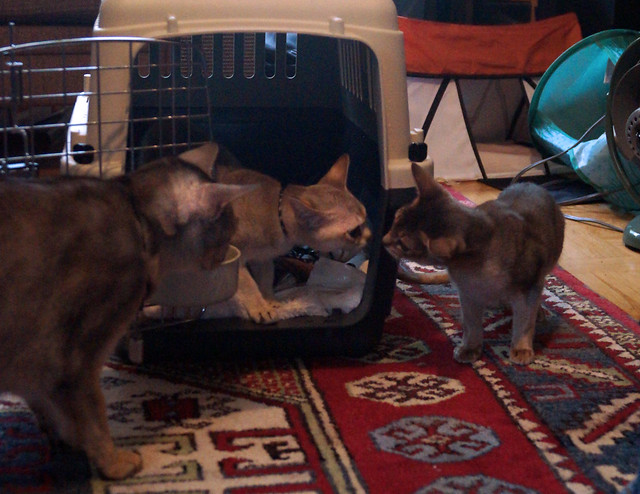 Even though Zak is an older male, Rory is still bigger than him. 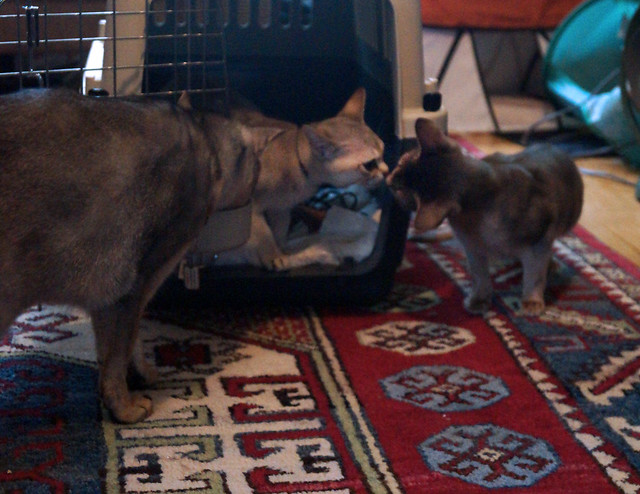 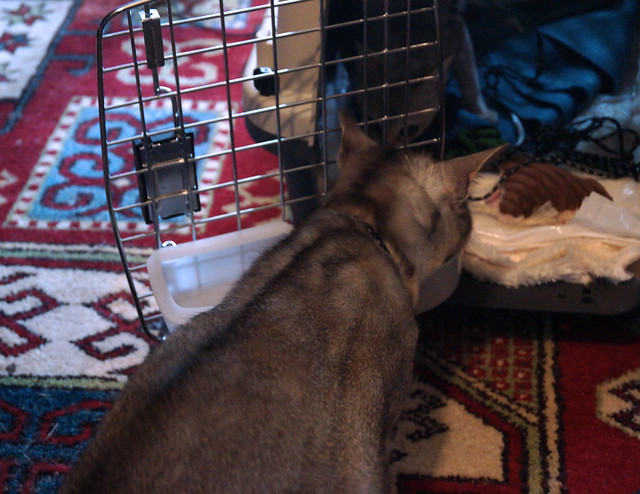 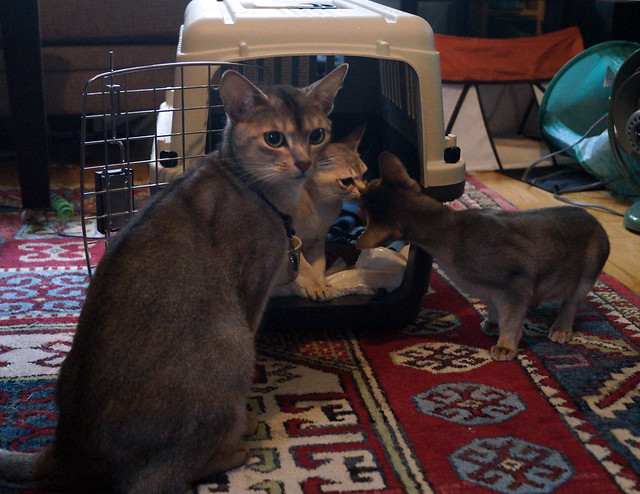 The point is to meet the new kitten, not eat the food in his carrier! 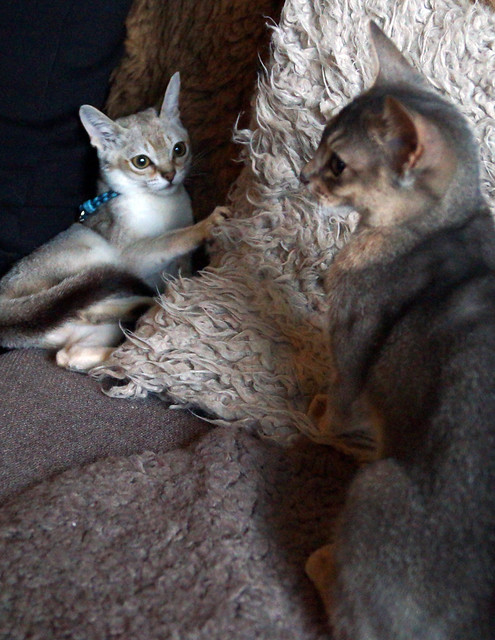 Rory was delighted to see Zak! Someone her own size to play with! 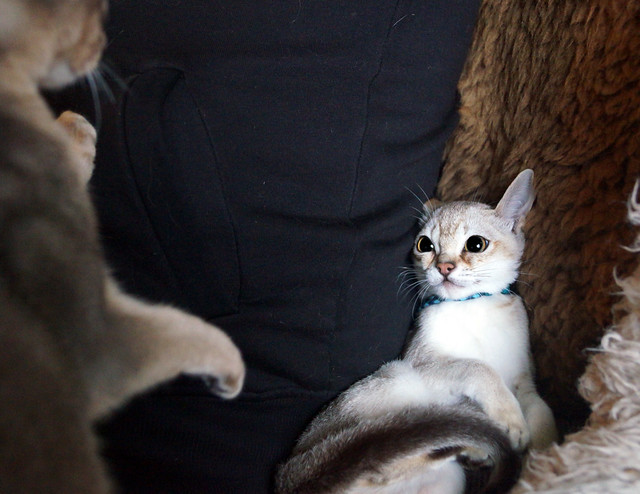 She tried to play with him right away. 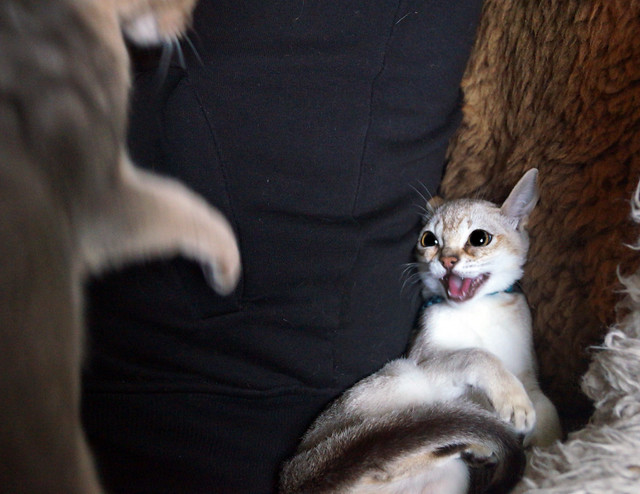 Zak…wasn’t so sure. But I think they’ll end up being fast friends. I think he and Freddy will, too. But I am afraid poor Freddy won’t ever have the kind of bond he had with Logan with any other cat. But maybe Rory and Zak will have something like that as they grow up together.