We took Jacoby into the Anicura hospital in Jönköping almost two weeks ago to have more blood drawn for more tests to try to sort out what is going on with him. Whilst we waited for the nurses to come. we availed ourselves of the free treats. 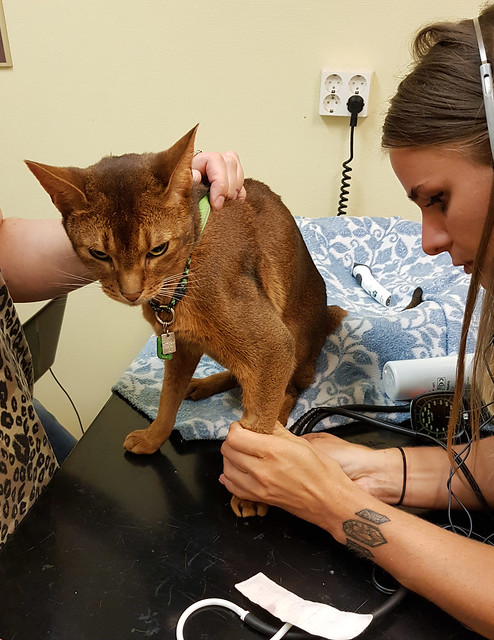 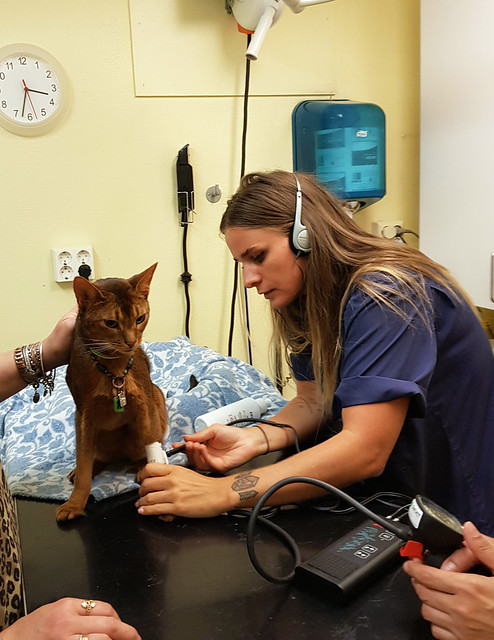 The first thing the nurses did was take Jake’s blood pressure. It’s a bit more involved than a human getting blood pressure tested. 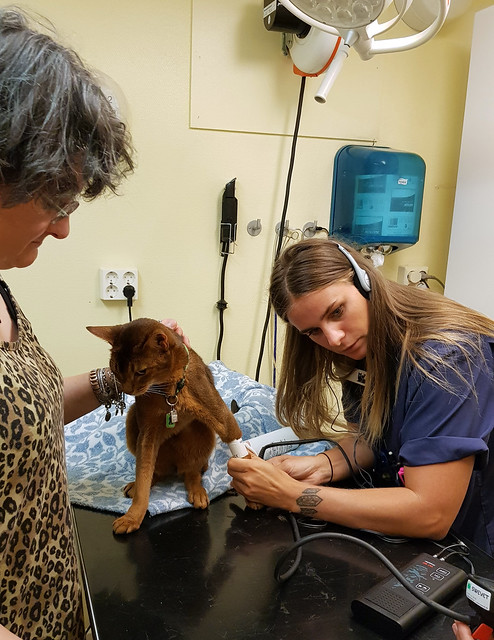 There’s a sort of doppler machine and they use headphones to listen to his blood whilst they press the button on the sphygmomanometer. 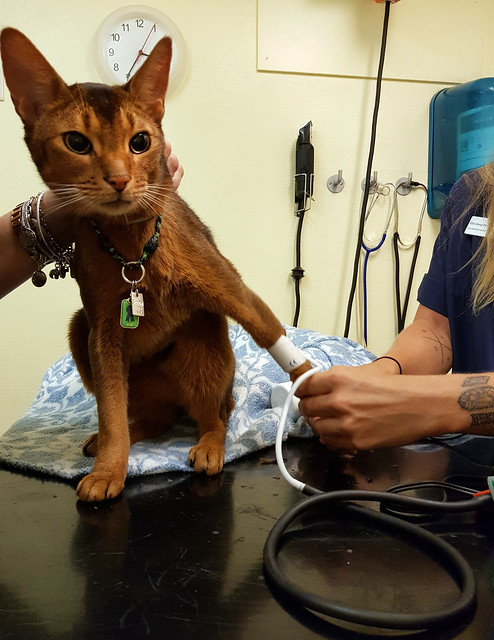 Jake was less than impressed with the cuff on his arm (which was still bald from the last time he had blood drawn. 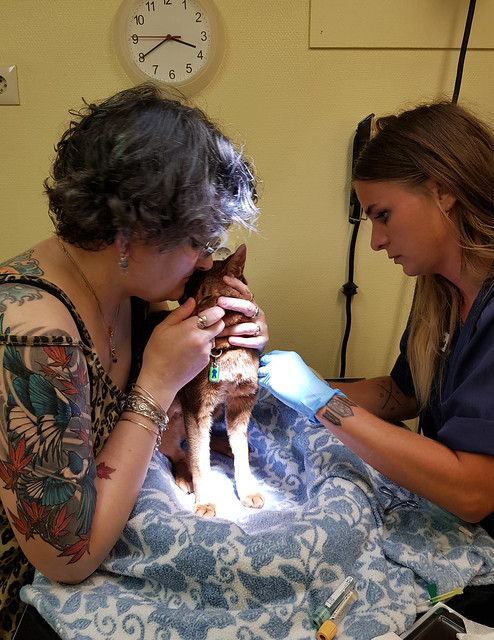 After getting his BP, it was time to draw some vials of Jake’s blood. I hid his eyes because I don’t like to watch when they take my blood for a test! 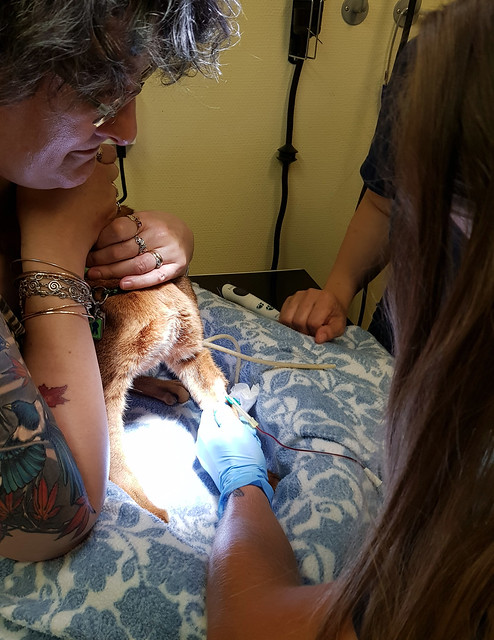 I have no problem watching someone else get their blood drawn, though. 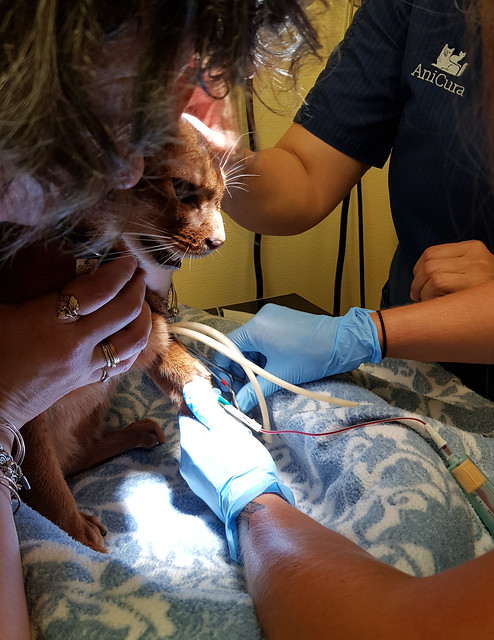 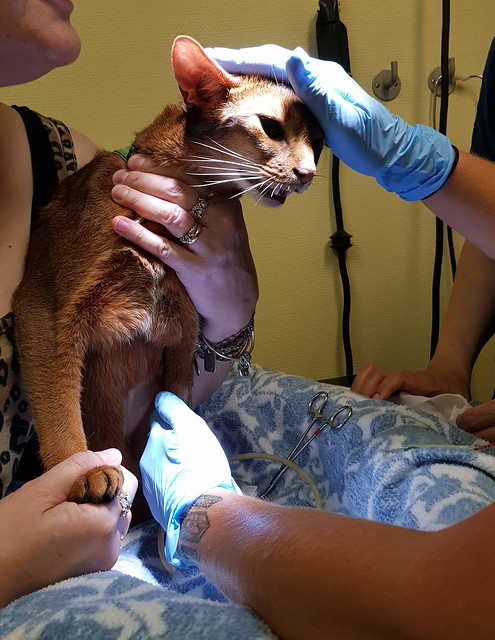 But before they were done drawing all the blood they needed, Jake broke loose from my grasp and dislodged the needle. 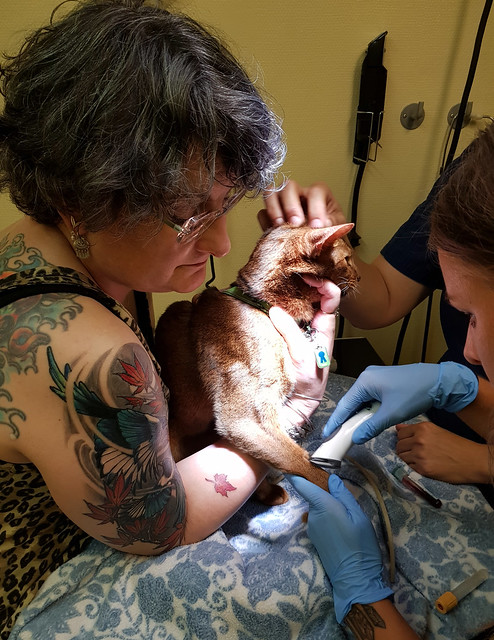 His pulling away like that caused a haematoma (bruise) on that arm, so they had to shave his other arm to get the rest of the blood. 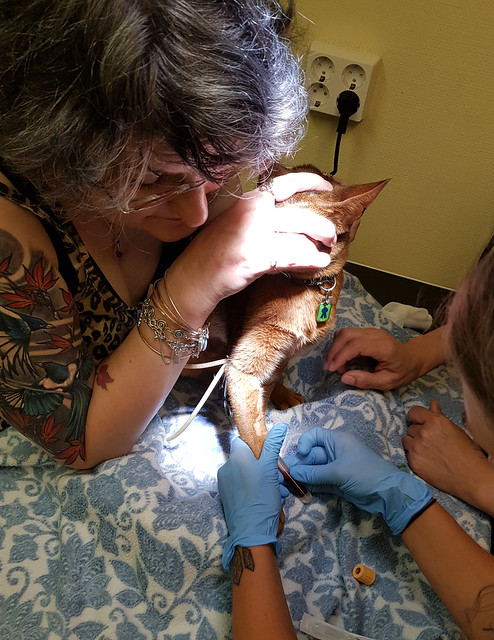 Again, I covered his eyes so he couldn’t watch the blood coming out of him.

I just got a call from Dr. Cecilia with the test results, and…I’m going to have to take him in next Monday afternoon. Tuesday the 14th he is going to get biopsies done on his intestinal tract.

We still need the parathyroid test confirmed, because Dr. Cecilia needs to call the lab again; the results don’t make sense to her and she wants to verify them. But he has increased antibodies and decreased albumin in his blood and he seems to be “leaking” protein in his digestive tract, but it’s not coming out in his urine, so we need to figure out why that’s happening. His calcium levels are fairly normal, though, so that helps rule out a few things. 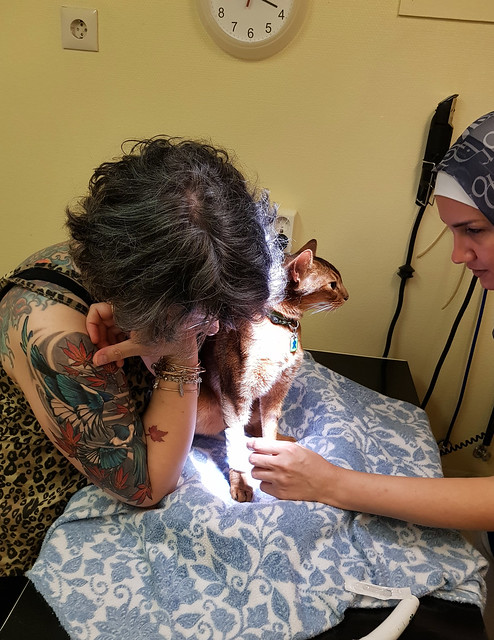 I will have to take him in Monday, and he’ll stay overnight. Then they’ll do the surgery Tuesday morning and keep him for observation. They may do an ultrasound Wednesday, and then I pick him up Wednesday afternoon or perhaps later depending on how they feel he’s doing. The biopsies do leave small holes in the tested organs which are sutured, and in 5%-10% of cats there can be complications due to these holes. Hopefully we won’t have any of that. The alternative to the surgical biopsies is to try giving him corticosteroids such as prednisone, but the problem with that (as anyone who’s ever watched House MD knows), is that because we don’t know what is causing his pain and weight loss, the steroids might just mask the problem, without helping to cure it. Or they could be contraindicated for whatever his condition actually is and make everything worse. Or, when we do get the diagnosis, having had cortisone treatments might mean we can’t go ahead with the new treatment because of drug interactions.

Luckily, it does not look like FIP, and the protein levels don’t indicate that it’s anything like FIP, which is good, but it could be lymphoma (which is what we thought Logan might have had before FIP was confirmed). It could also be a lot of other things: pancreatitis, chronic inflammatory bowel disease, intestinal ulcers…it’s really hard to say. 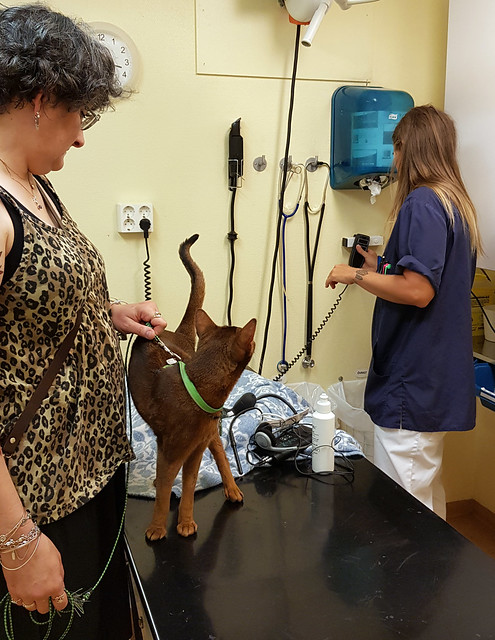 The bill is going to be around 20,000kr…so glad we have insurance and that this is not a pre-existing condition!