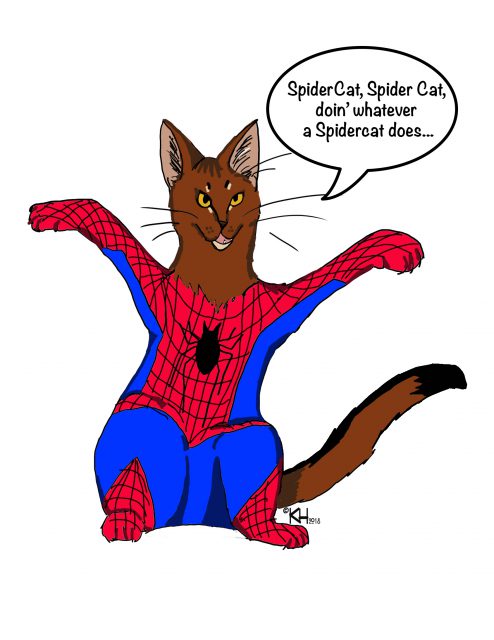 The weekend before last, Björn, Kalle and I went to the aby-aSweden Game 2018 here in Skövde. I’m not really much of a gamer, but I went along anyway, figuring there’d be something interesting there. And I was right! The first thing we saw was a huge display of Wacom tablets. I do have one, but I find it very difficult to draw on it as I find the disconnect between drawing on the table and looking at the computer screen difficult. But they also had the Wacom MobileStudio Pro tablets, the type where you draw directly on the screen, available to play with. They were also holding a Spiderman-drawing contest…so the drawing above is what came of that combination. I know it’s not up to my usual standards…but it was drawn in under an hour whilst standing up and using an unfamiliar device, so I can’t beat myself up too much about it. 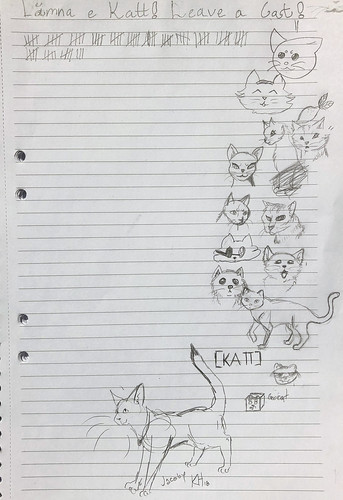 But I actually found an intriguing came to play as well: Cateau. Cateau, made by a company based right here in Skövde, is an award-winning choose-your-own-adventure type game that involves walking around in Paris making friends with outdoor cats you meet along the way. Sadly, though, it’s only playable on PCs and I don’t know if they’re going to create a Mac or iOS version. They had a sheet of paper where people who tried out the game could “leave a cat,” so of course I had to sketch a quick Jacoby. There are a lot of other players who are good at drawing cats, though!