Jacoby, Björn, Kalle and I had spent a long weekend in Tallinn for a cat show. On the way back, on 6 June, we met Karin at Stockholm’s Centralstation to collect Alfred. 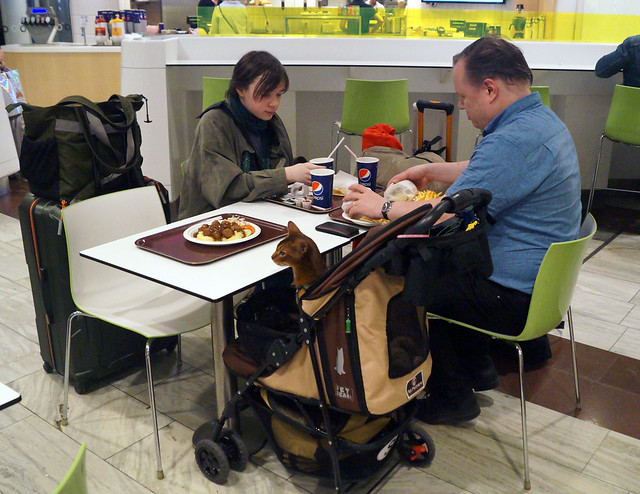 We got there a little early, so we had lunch in the food court. 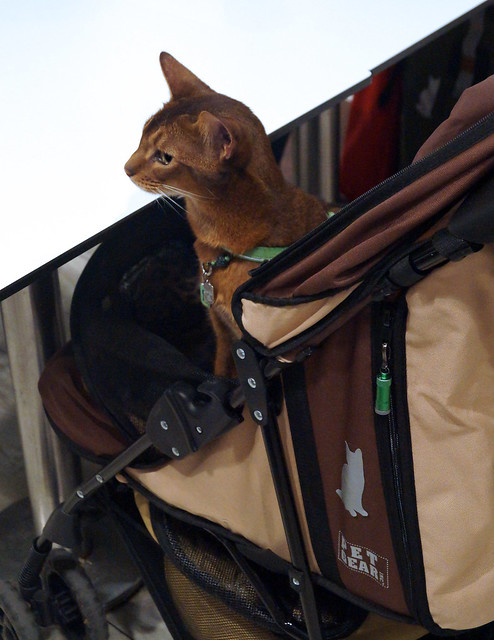 Jacoby was his usual well-behaved self, as always. 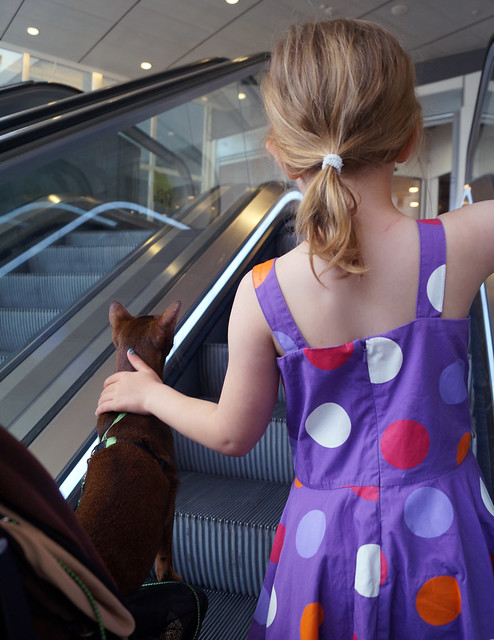 Titti and Emma also met us at the station so they could see Jake and Kalle, and also meet Freddy. Tittl and Kalle stayed at the table with the luggage whilst Björn, Emma, Jake and I went to the parking lot to meet Karin with Freddy. 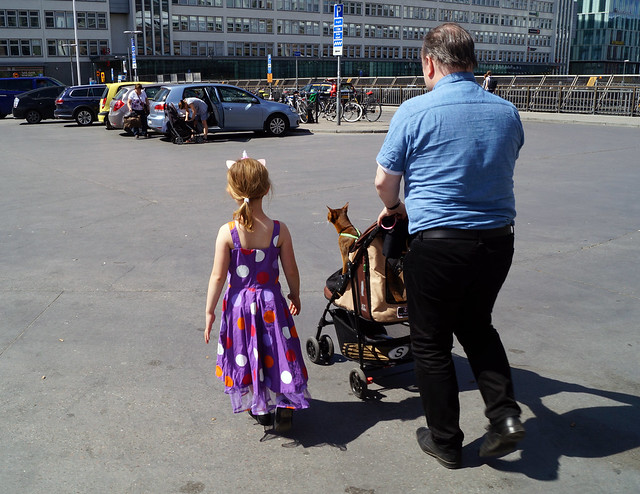 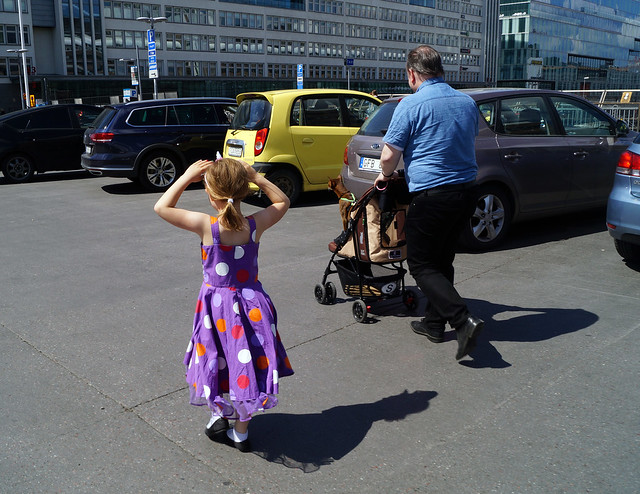 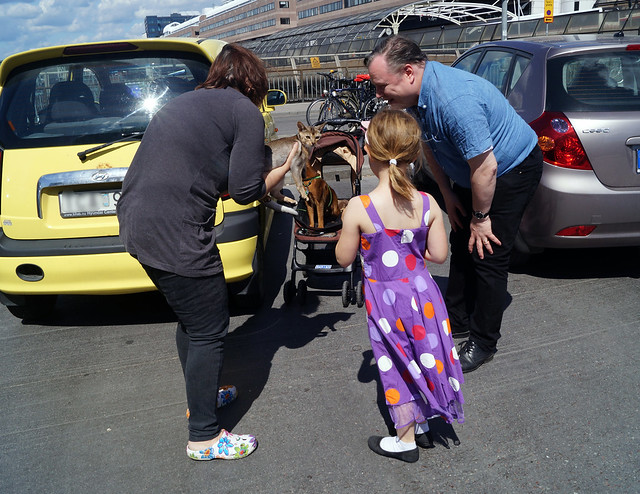 Karin brought Freddy out and introduced him to Jake. 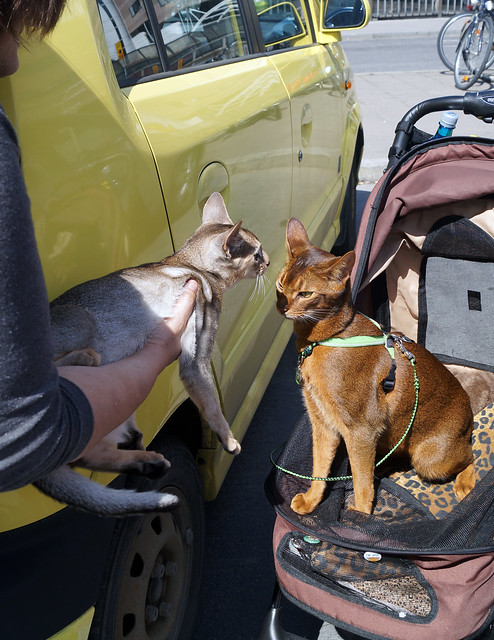 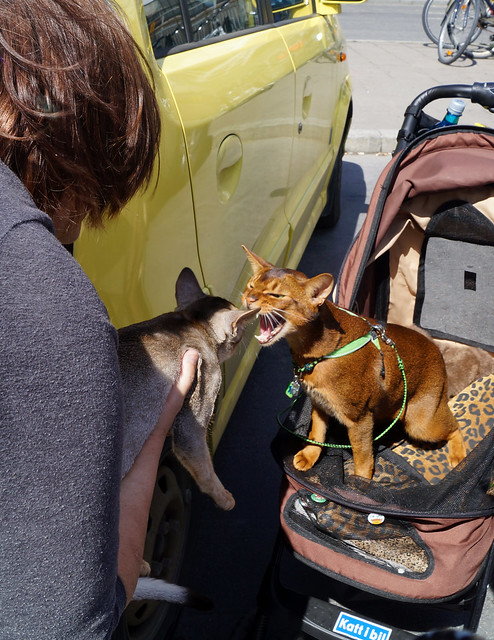 …about as well as could be expected. 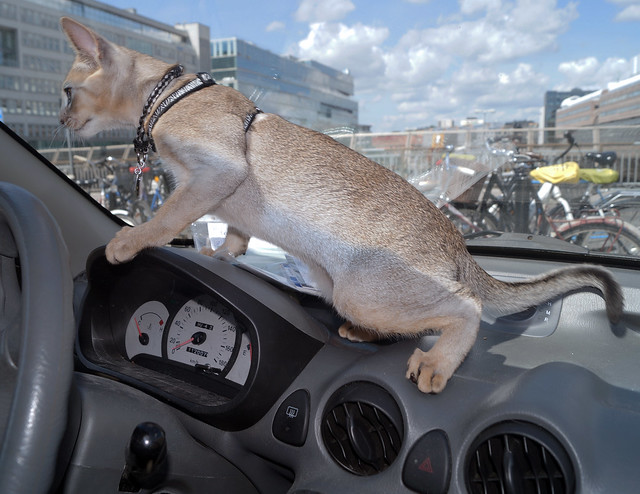 Karin, Freddy and I sat in the car whilst we dealt with Freddy’s paperwork. 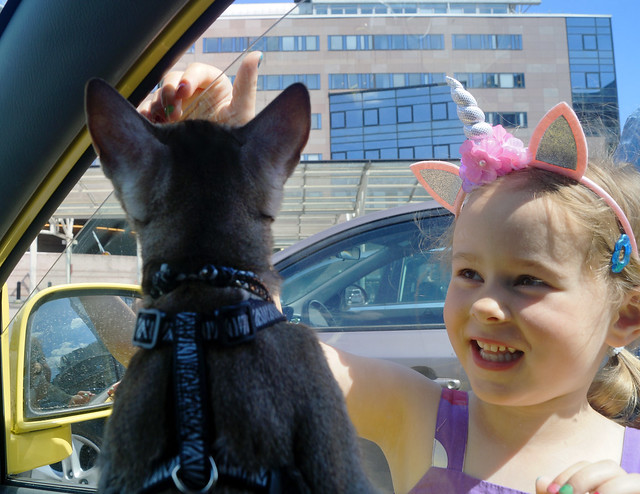 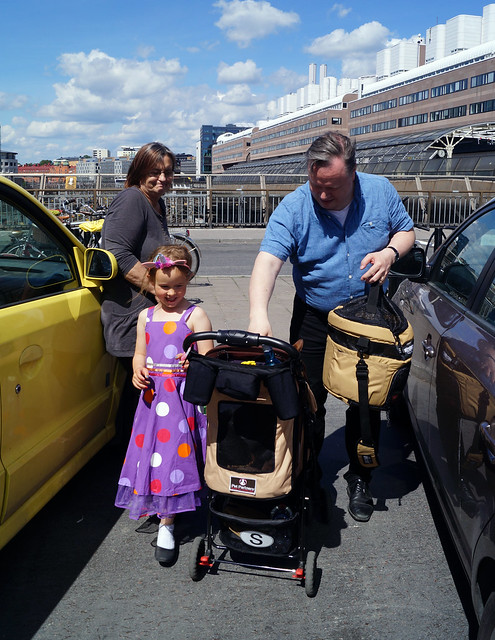 We didn’t think Jake was ready to share his stroller, so we put Freddy into a carrier, said goodby to Karin, and went to rejoin Kalle and Titti. 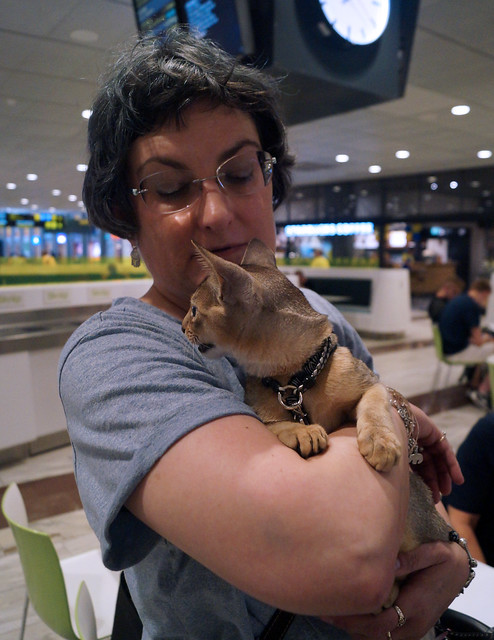 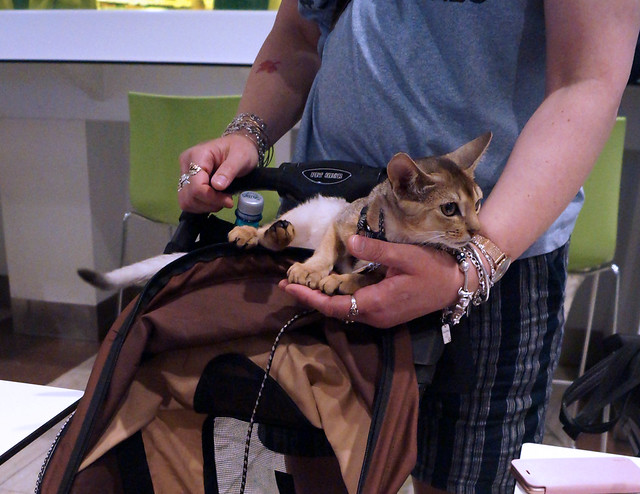 Back in the station, we all got acquainted whilst waiting for train back to Skövde. 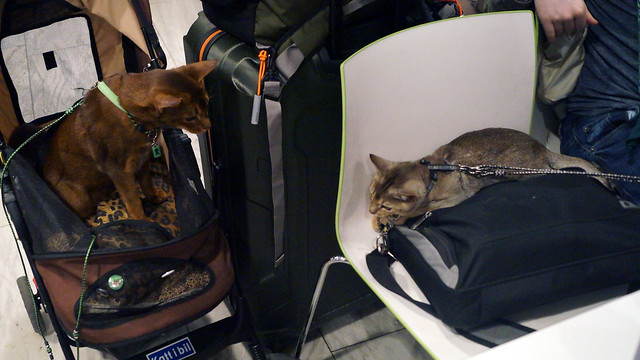 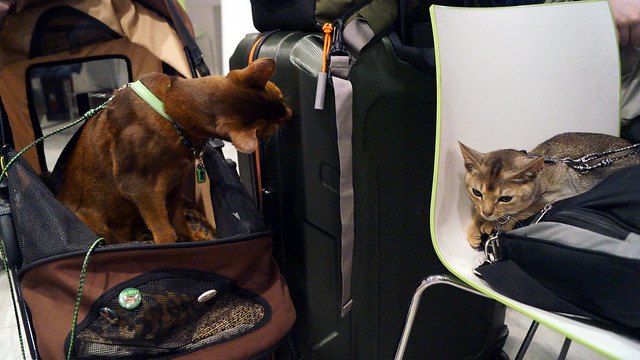 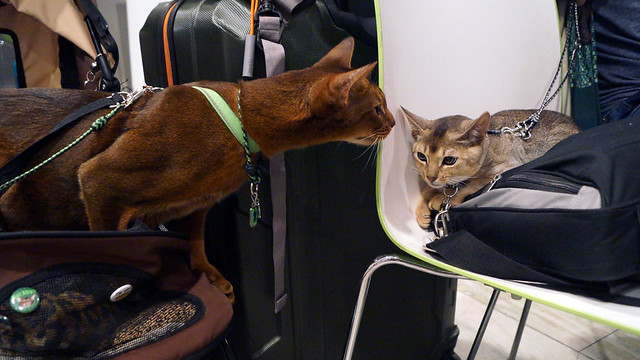 Having gotten his hissing out of the way, Jake was very curious about the newcomer. 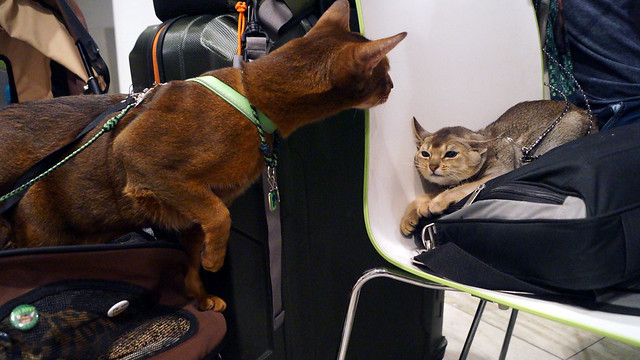 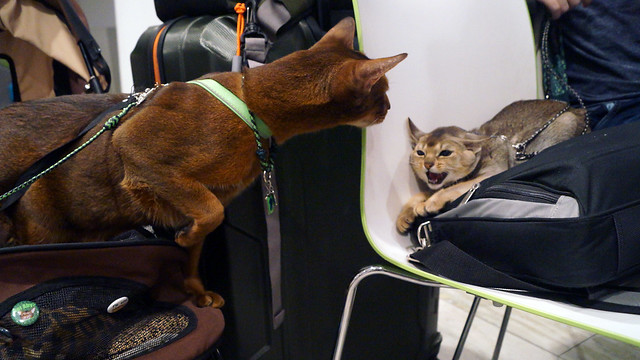 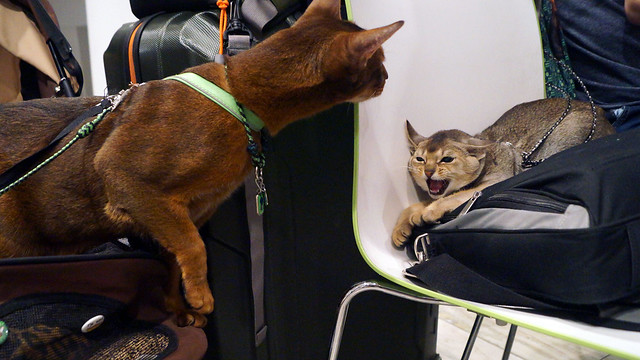 This time, Freddy was the one hissing. Which I found a bit surprising, since Freddy had four littermates and grew up with three adult cats. I didn’t expect him to be so defensive. 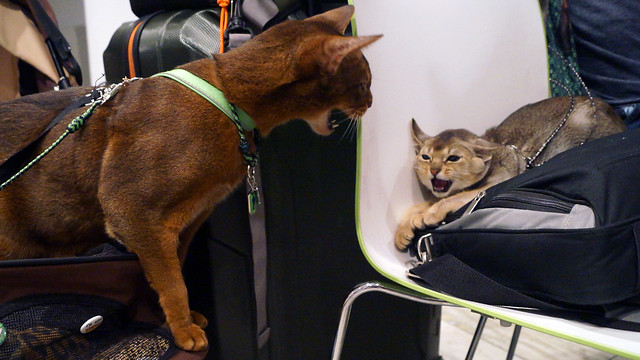 I think Jake was a little taken aback by Freddy’s reaction, too. They had words. 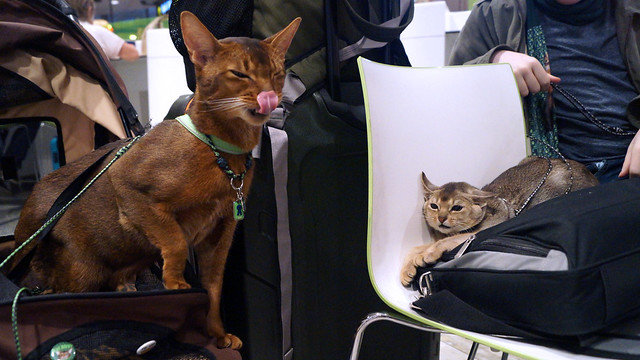 Jake broke the spell with a nose-lick. 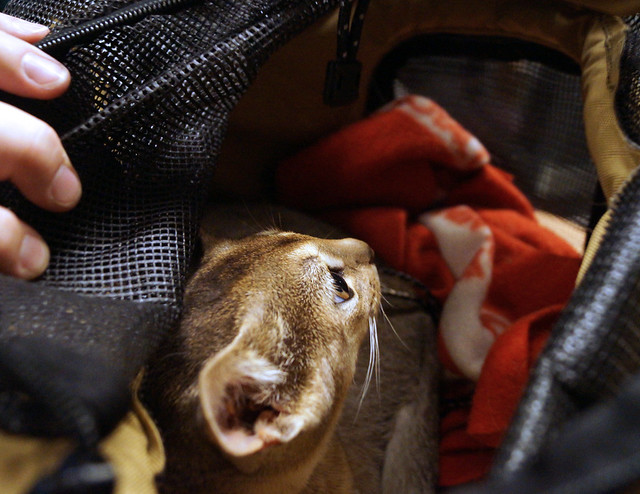 By that time, our train was ready to depart, so we packed Freddy into the carrier with his baby blanket and headed out to the platform, homeward bound.