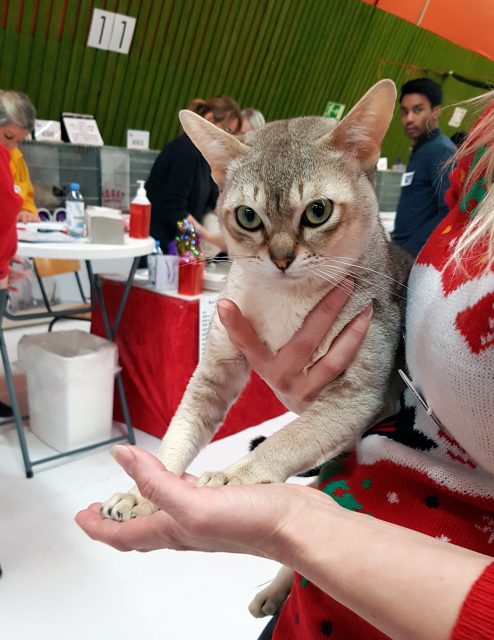 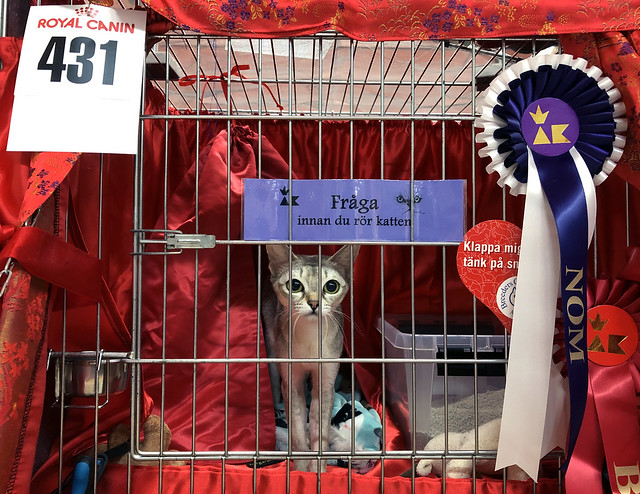 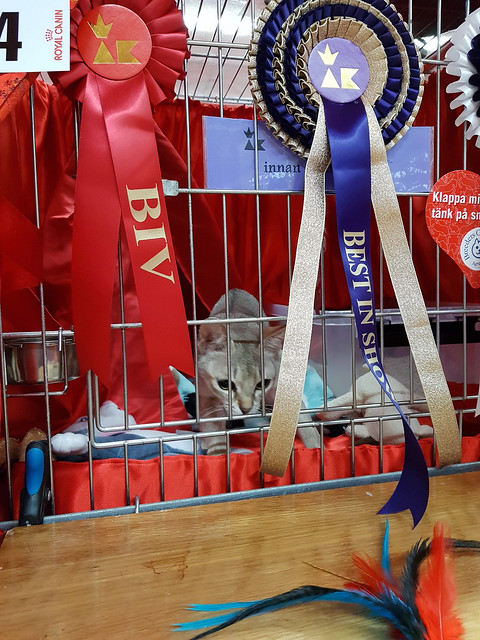 On Saturday, there were four Singapuras entered in the show. Izaak is now old enough to start earning titles, and he was up against three of Stellan’s cats. He wasn’t nominated, but he was up against a Singa who won at the Scandinavian Winners Show last spring! Little SW IC S*Kustens Chi Sarà Con Te was the BIV (Best in Variety) Singa and nominated both days. She was even Best in Show on Saturday! 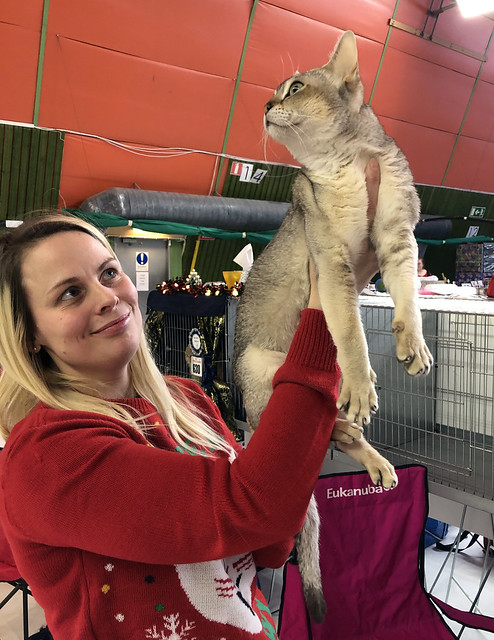 But on Sunday, a fifth Singapura was entered in the show! And not just any Singa, either…SE*Melur’s Mistle, Logan’s half brother and another kitten from Naina, the Singa Björn brought back to Sweden with him in 2016! 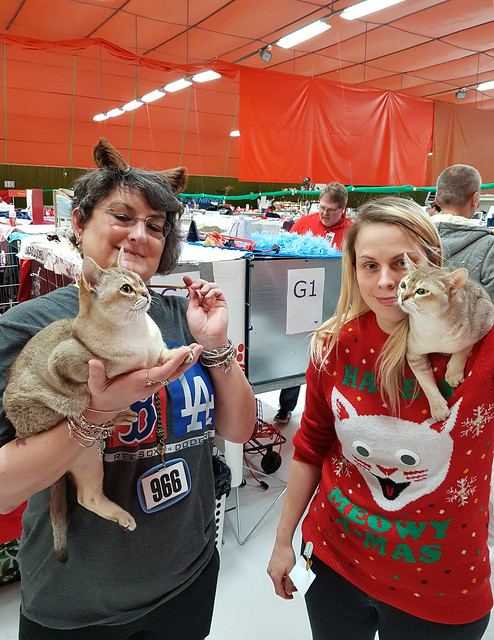 Of course, Zak and I had to go meet him and his human, Charlotte! Mistel lives in Norway now. 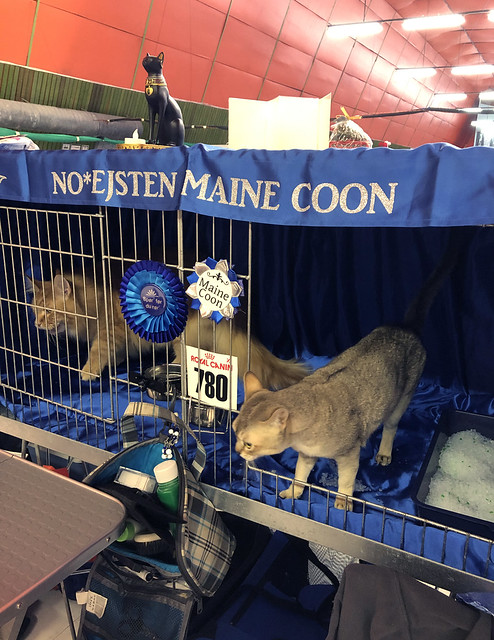 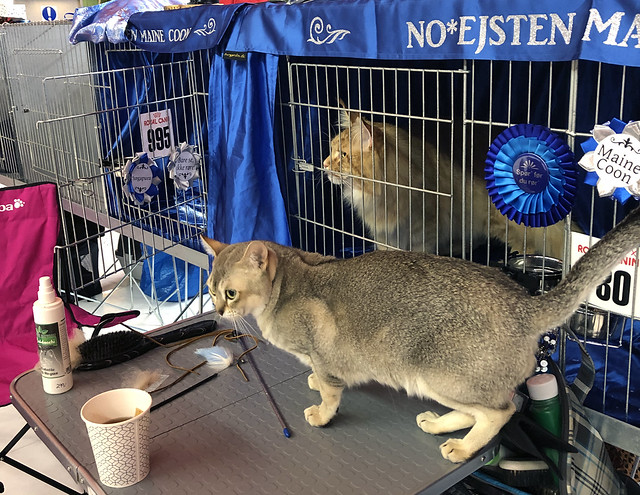 …and one Singapura. The smallest cat breed living with a pack of the largest cat breed. Apparently, Mistle holds his own. I am not surprised. 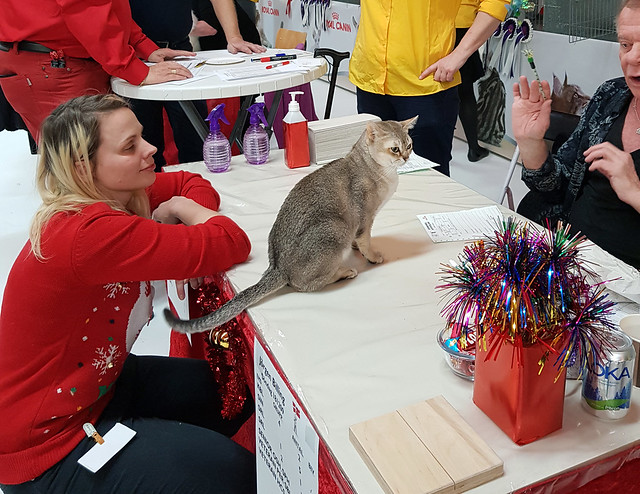 Mistel and Zak are both in Class 9, the Open class for unneutered cats over 10 months old. Mistel is about a month older than Zak, so he was judged first. 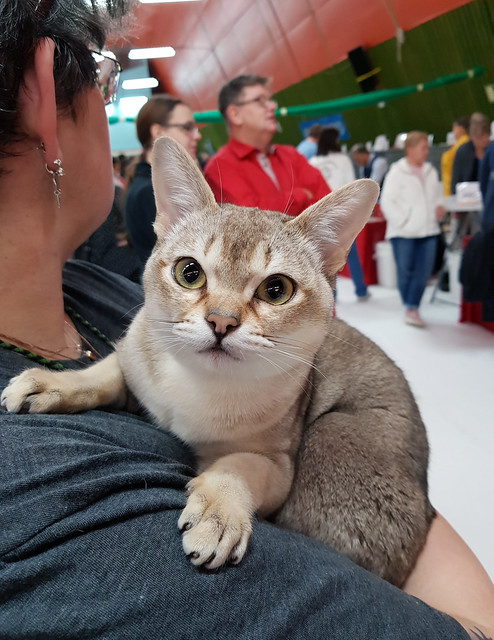 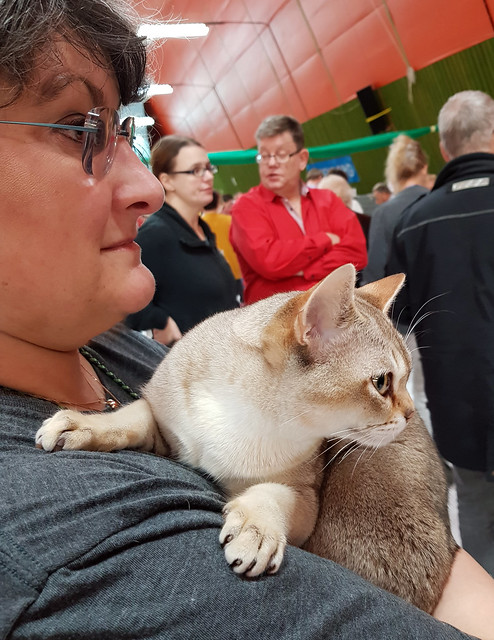 Zak and I watched whilst we waited our turn. 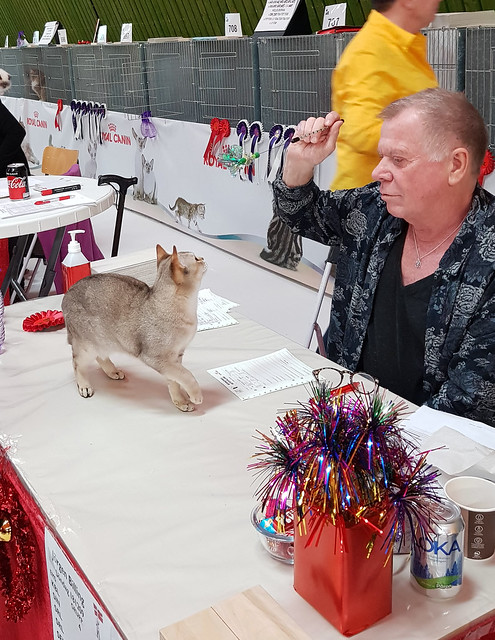 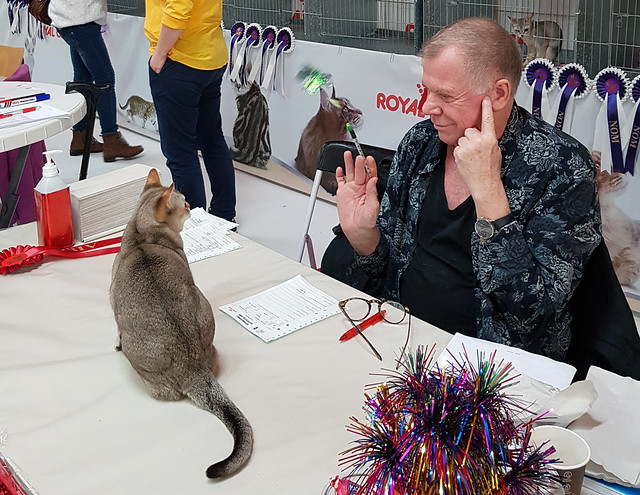 When he got on the table, Zak really turned on the charm. 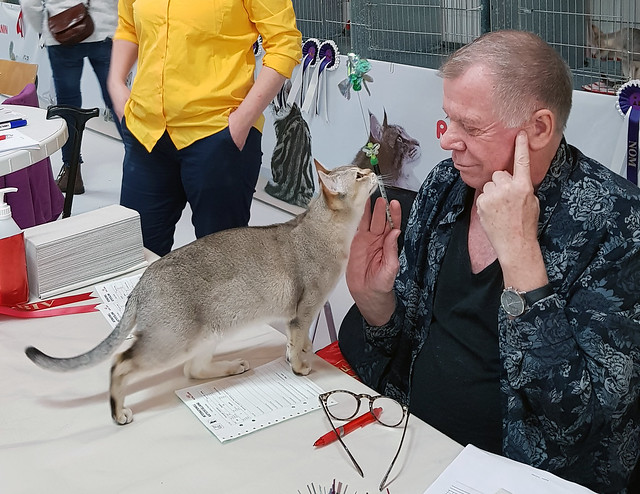 I mean, he really turned it on!

He also made sure that the judge wrote only nice things about him. 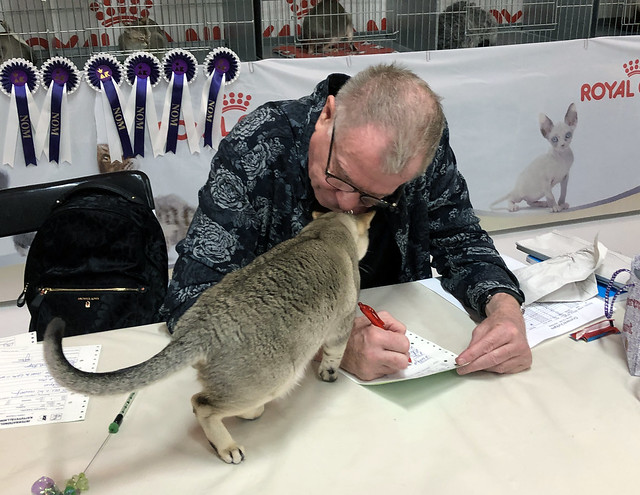 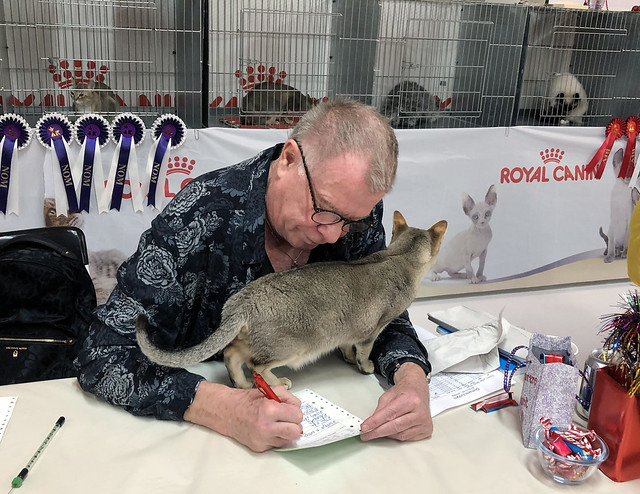 He was quite helpful, as you can see. 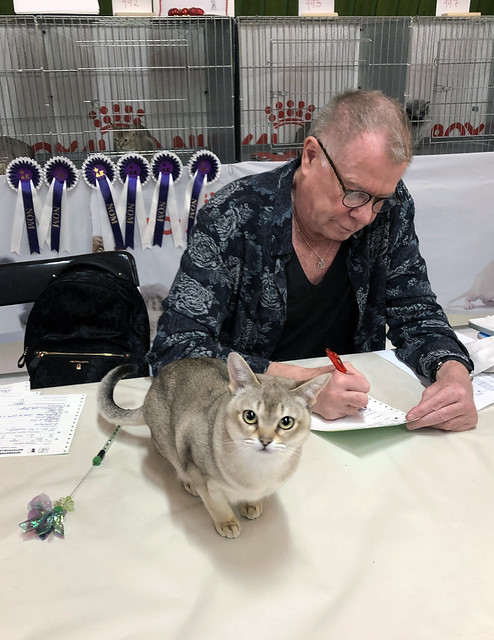 Because there were two Singas in the same class, only one could get the certificate. And, on Sunday, it was Zak who won the CAC (Certificat d’Aptitude au Championnat de Beauté). Mistel was Ex1. Yesterday, Zak had no Singa in his class, so he got his CAC by default. When he gets one more, he will be a Champion. 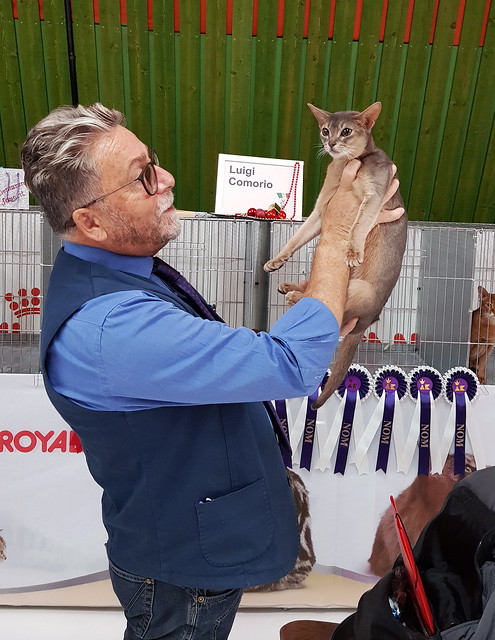 Meanwhile, Lorelai was the only blue Aby in the show. She is still in the Junior class (she turns 10 months old tomorrow), so she still only got EX1s. Our next show in Örebro in January, she will also be competing as an adult. 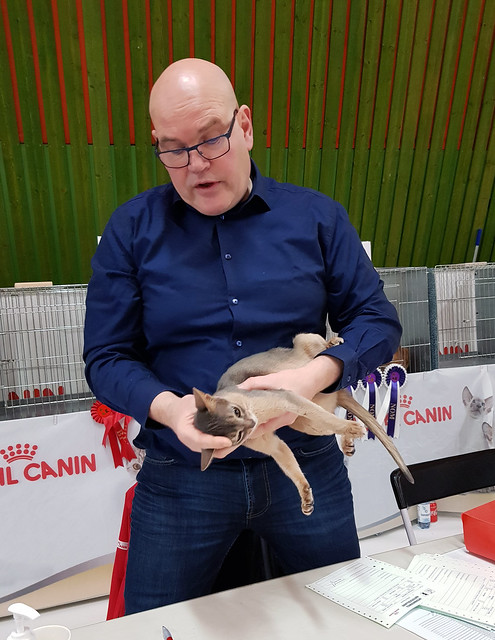 Rory wasn’t up for the nomination on Saturday at all, but on Sunday she really enchanted her judge. 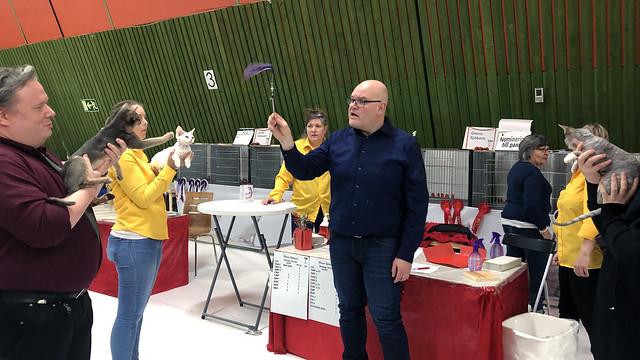 She was up for the nomination with two adorable Devon Rexes. 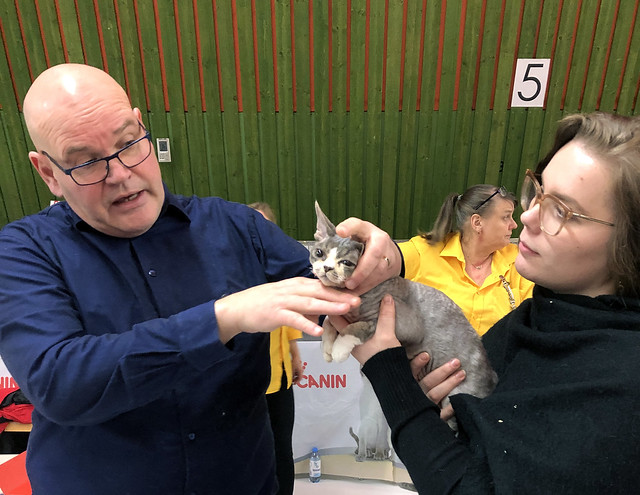 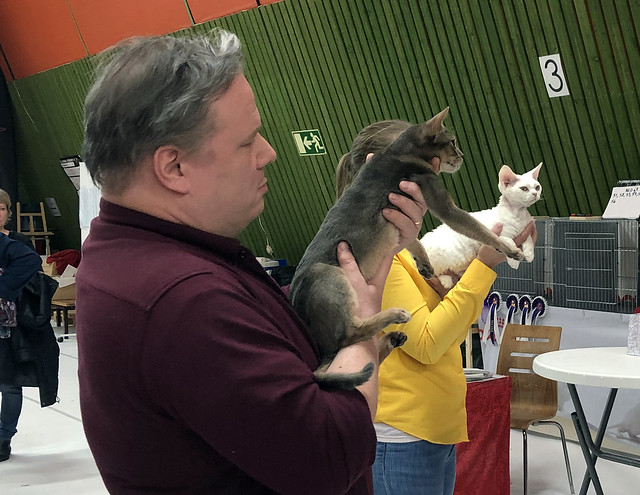 And a copper-eyed white girl. 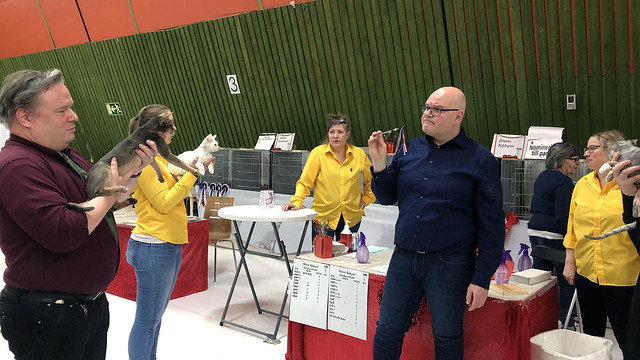 The judge, Glenn Sjöbom, was truly torn. I swear, he took at least ten minutes to decide which of these girls to nominate. In the end, it was the white Devon…but he said that this was the hardest decision he’d had to make all weekend. 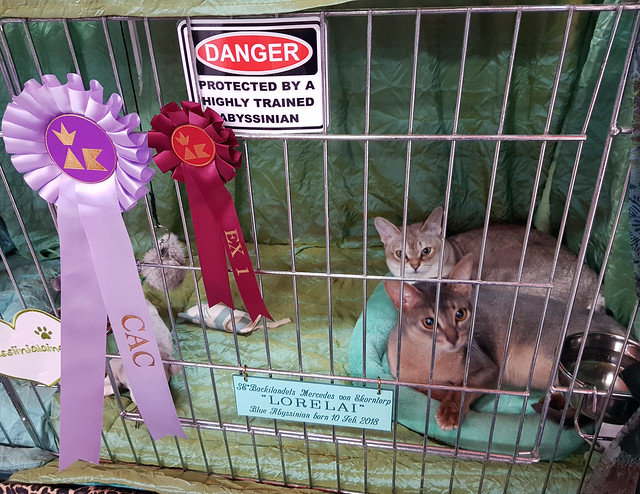 All in all, despite not getting nominated, it was a fun weekend. Our friend Anna and Peter’s Aby Bonk earned his Supreme, and it was great seeing all our friends. And that’s really the point of the whole thing, isn’t it?

5 thoughts on “Aby-a-Day – 9 December: A surprise encounter at the show (Cat Show Sunday)”