Saturday was not a great day for Lorelai and Izaak; apart from Zak earning his Champion title, neither he nor Rory were even up for a Nomination. 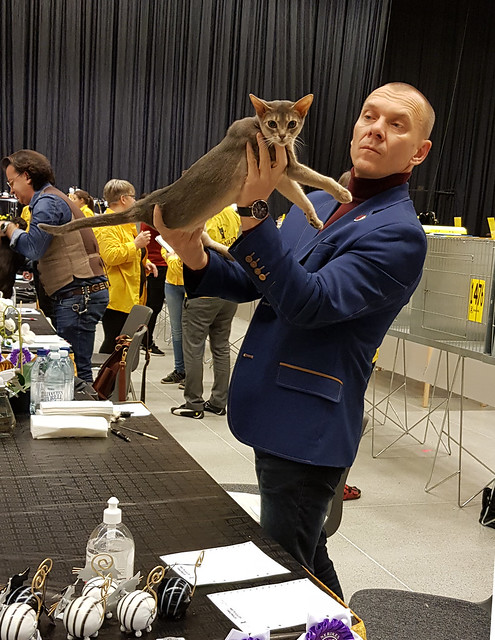 But Sunday, both of their judges loved them. Here is Polish judge Robert Nowak admiring Rory. 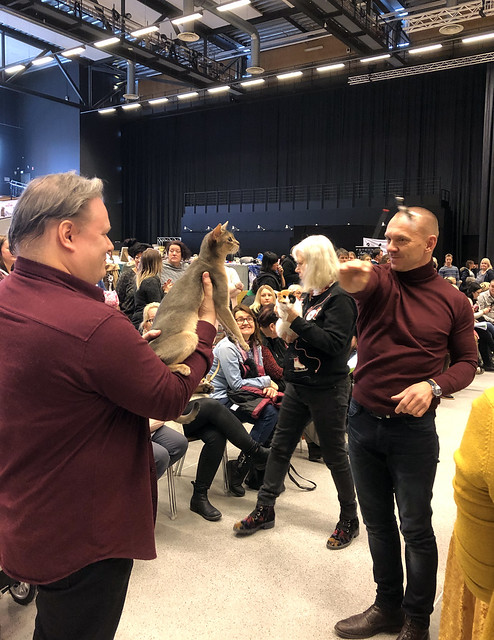 There were five females up at the Nominations. It was a very close competition. 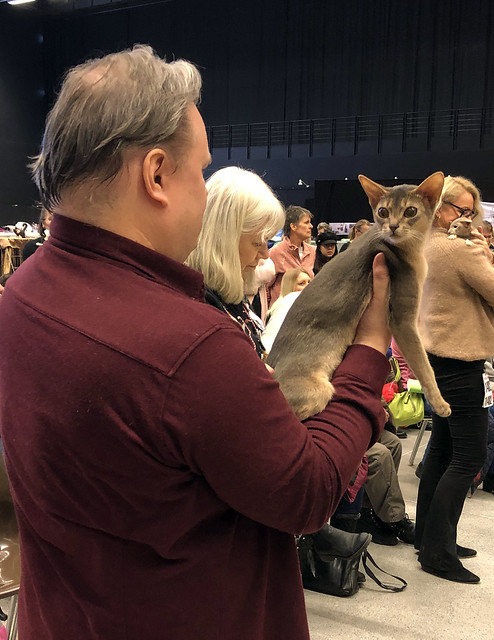 At the end, the judge chose a lovely Siamese to go to the panel. 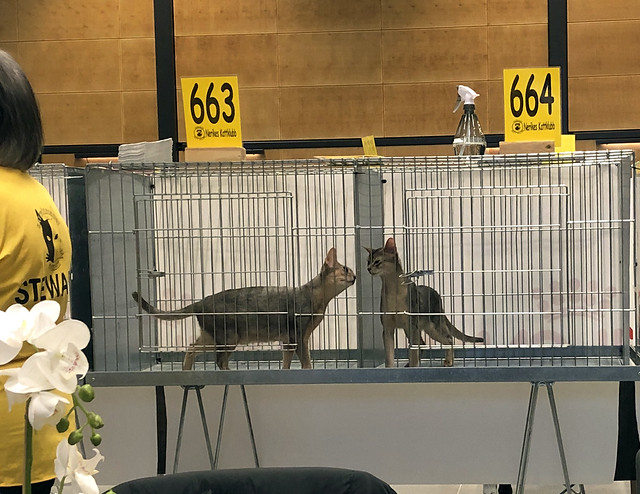 This is a shot from Saturday. Rory is Number 664. Number 663 is GIC DK*Saltvig’s Oona. We have been a little concerned that Rory small for her age (she’s smaller than Zak!), but Oona is over two years older than Rory and they are the same size! Oona was chosen over Rory on Saturday, but Rory was the judge’s pick on Sunday. 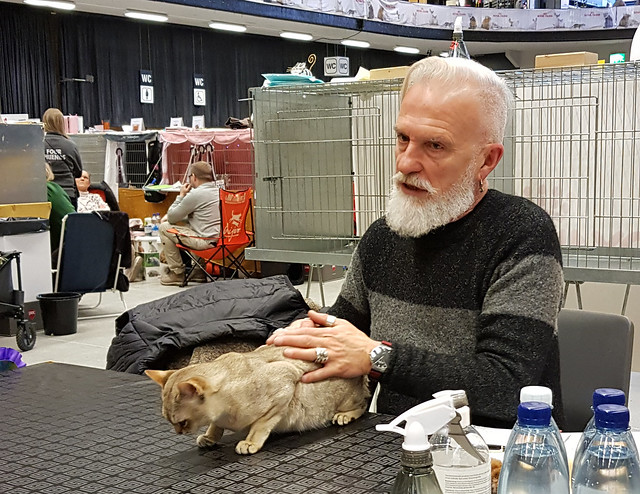 Zak’s judge on Sunday was Gerardo Fraga y Guzmán, from Spain. He loved Zak, but he was especially enamoured with his coat texture. 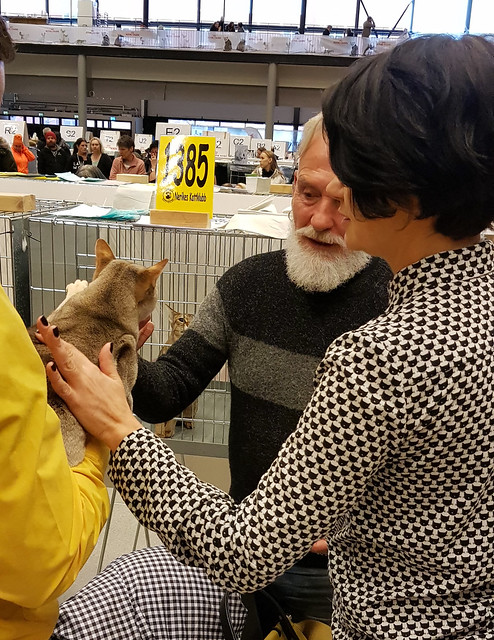 He even called the judge next to him over to feel Zak’s coat. That’s a particular compliment to the owner as well as the breeder, because the cat’s condition is a reflection of diet and grooming as much as it is genetics and breeding. It’s nice to know you’re doing a good job! 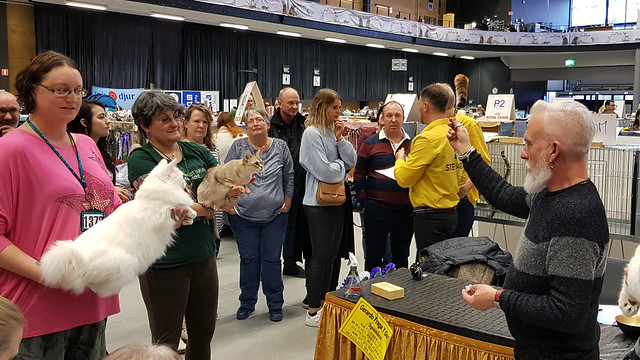 The Nomination in Zak’s category was also stiff. There were two British Shorthairs (one disqualified himself by almost biting his owner), a stunning white Kurilean Bobtail, and Zak. 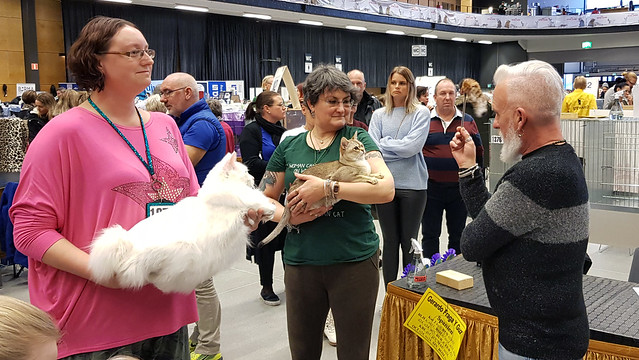 The judge had a cat teaser made with a bobcat’s tail that a Danish merchant sells at shows. We have one at home, too, and I have to hide it from the cats when we aren’t using it. Zak really wanted that tail! He actually jumped out of my arms in an attempt to catch it. 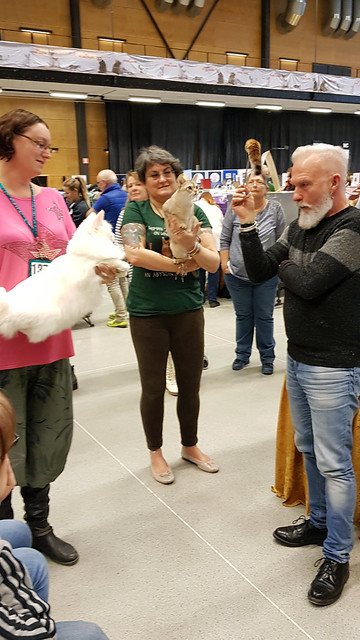 But in the end, the judge felt that, while both cats were excellent, the Kurilean matched the standard for his breed just a bit better than Zak matched the Singa standard. But it was close…and the Kurilean ended up winning Best in Show for male cats in Category 3! So…losing to a cat who ended up being BIS? Yeah, that’s not bad at all. 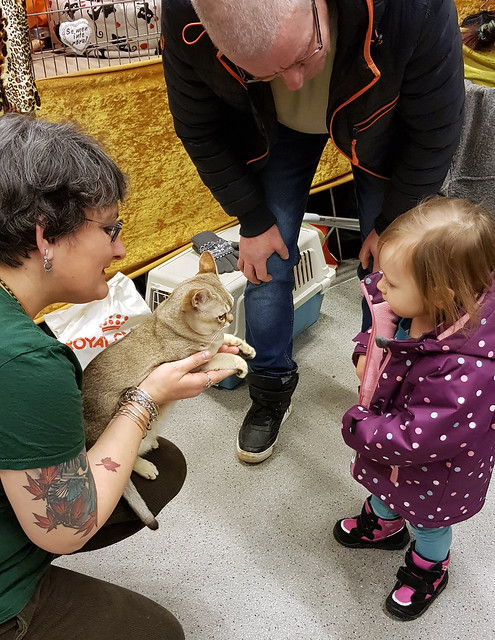 On the way back to our benching cage, we met a little girl who was meowing at all the cats. 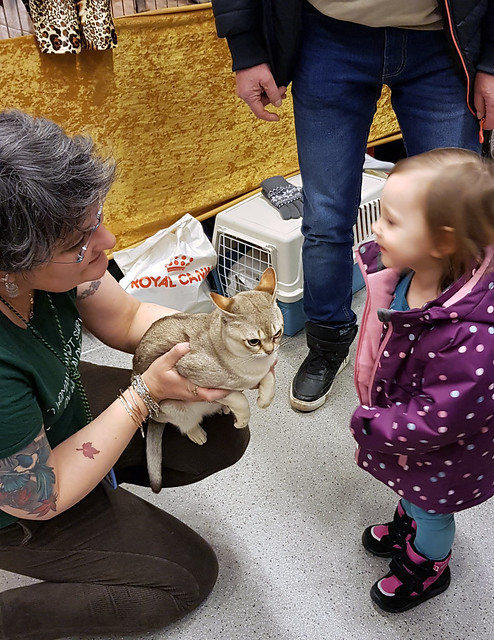 I thought she might like to pet one, so I knelt down so she could pet Zak. I know that if an exhibitor had done that to me when I was kid at a show, I would have been over the moon, so I hope we made that little girl’s day.