Last week when Jacoby and I went to Jönköping to see the vet and get his blood tested, we saw the cutest little play park on the way to the bus stop. 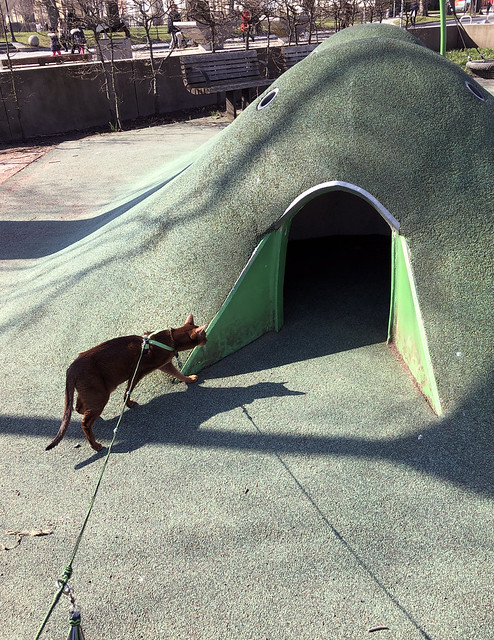 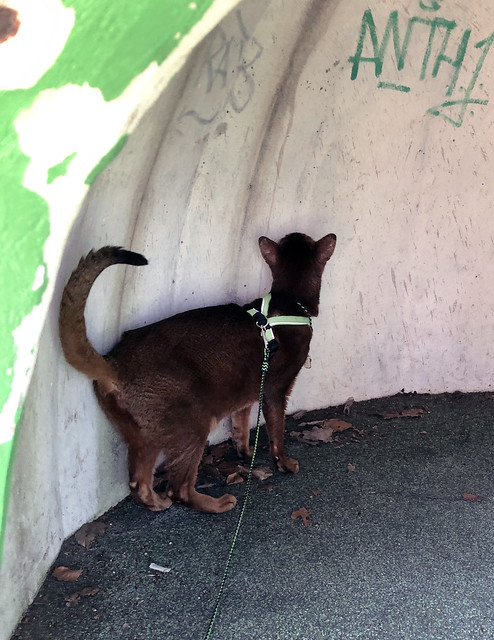 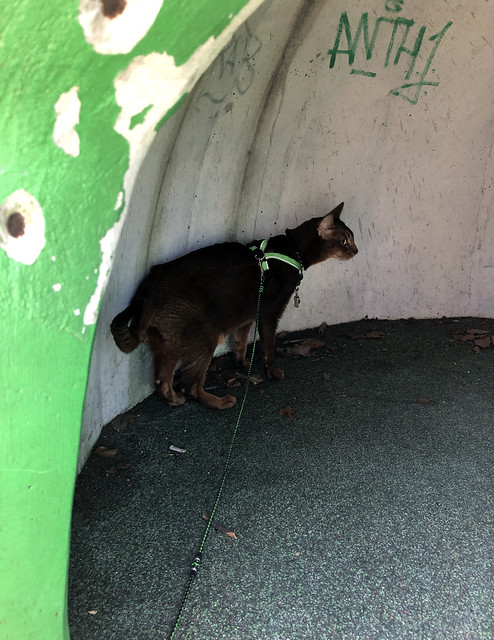 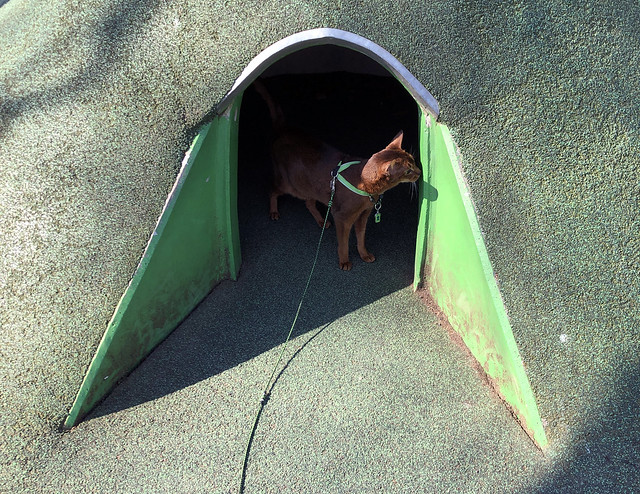 I knew Jake wasn’t really feeling well, but it was such a nice day, and we had time to explore it before our appointment, so I let him out of his carrier so he could explore. 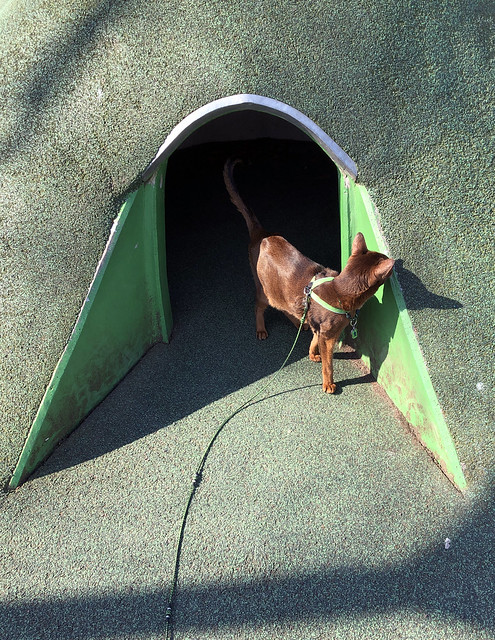 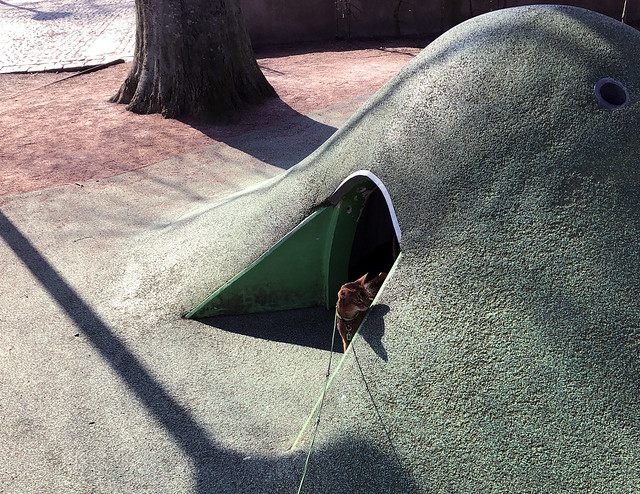 Sick as he was, he perked up and eagerly explored the first cave. 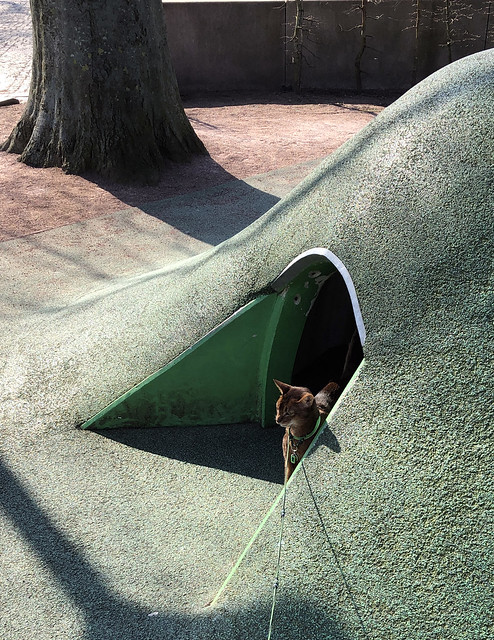 The little hills and caves were just the perfect size for him! I wish we had noticed this on earlier trips to Jönköping. 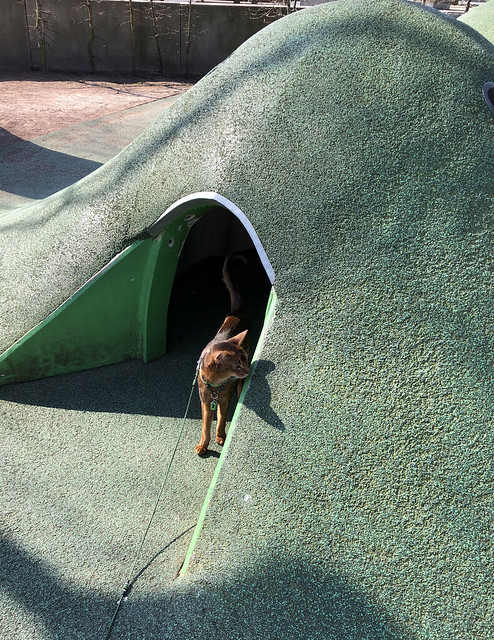 It’s even his colour! 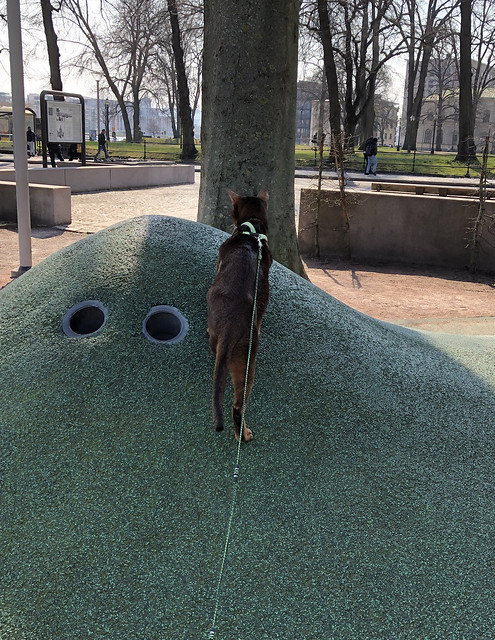 Typical Jake, he had to climb up and sit on top of the little hill. 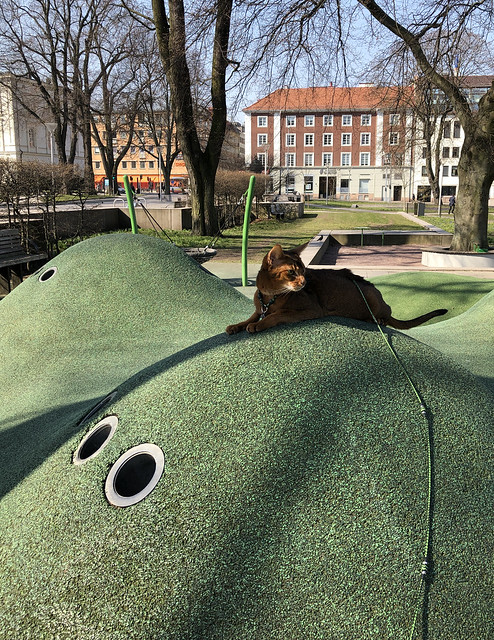 He always has to survey whatever kingdom he’s currently ruling. 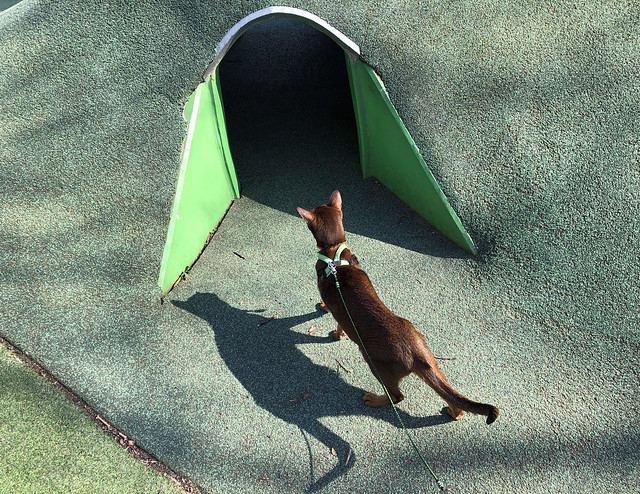 The next little cave wasn’t a cave at all… 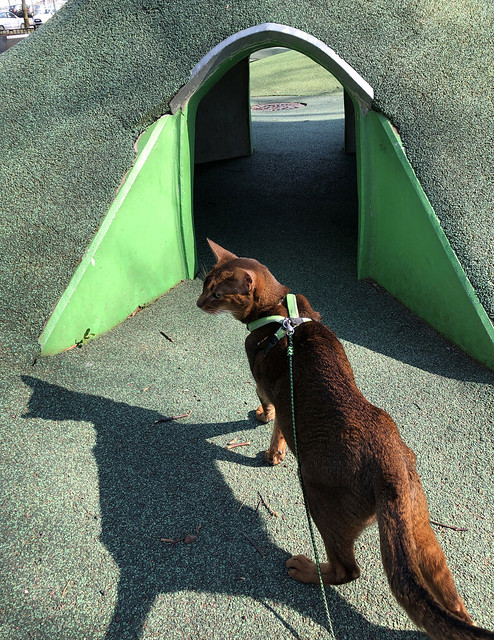 …It was a tunnel! 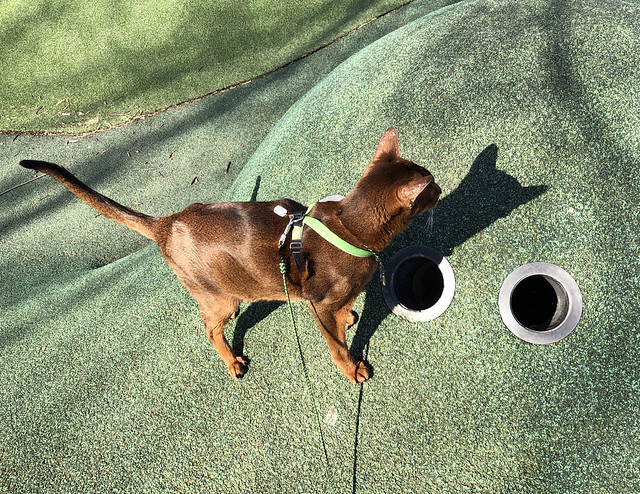 And in climbing to the top again, of course. 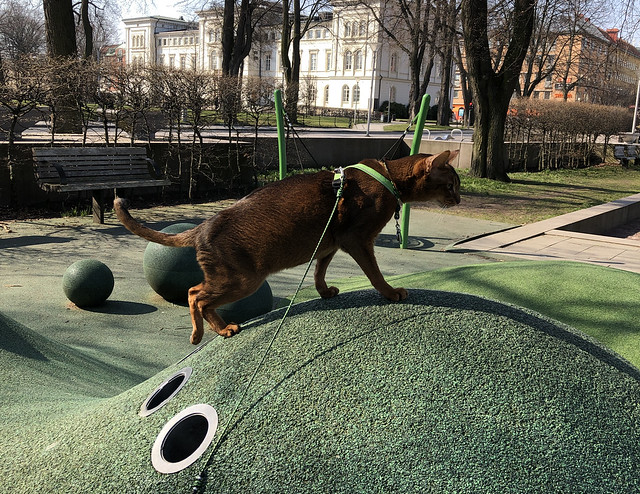 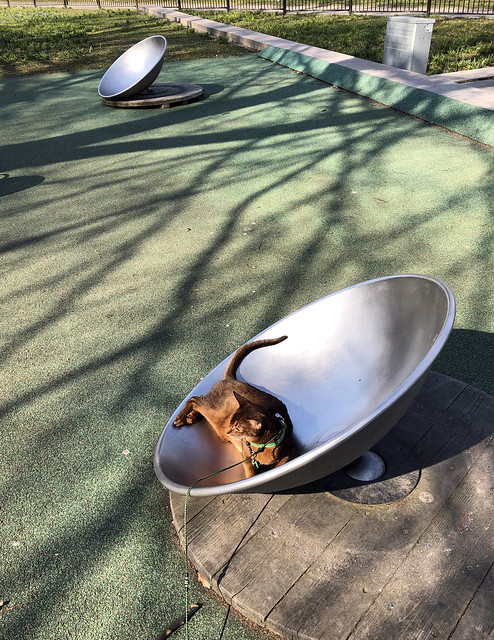 The park also had these spinning saucers. They were kind of like a merry-go-round for one. I didn’t spin him in it, but look! It’s the Cat From Outer Space! 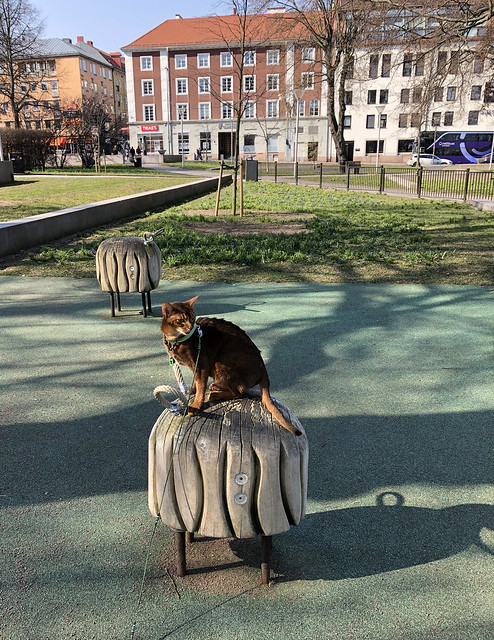 I’m not sure what these wooden and rope sheep were meant to be for. Just something for kids to pretend to ride, I guess. 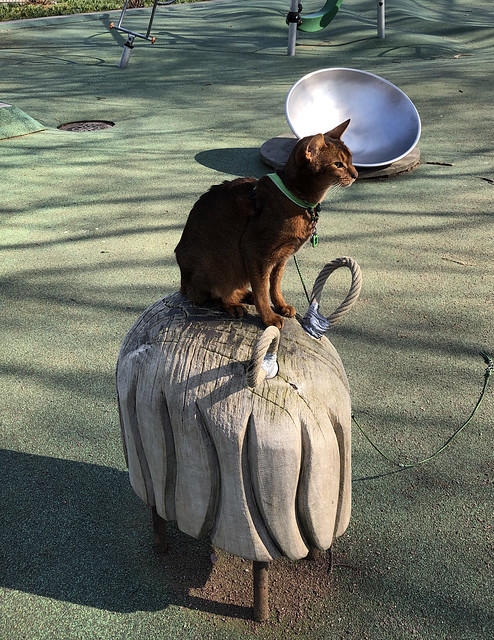 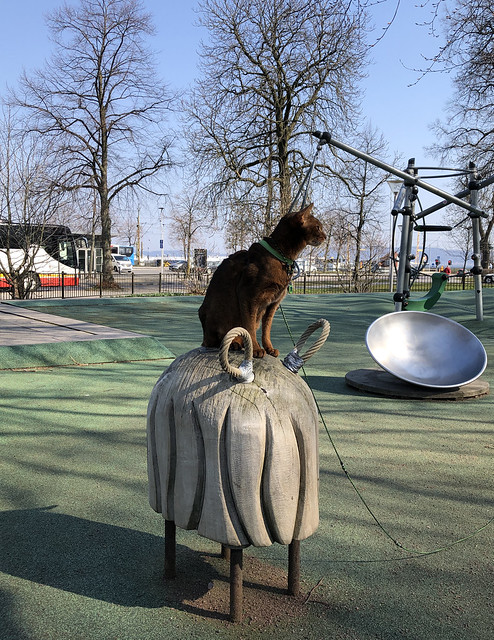 Jake thought they were pretty awesome, though. 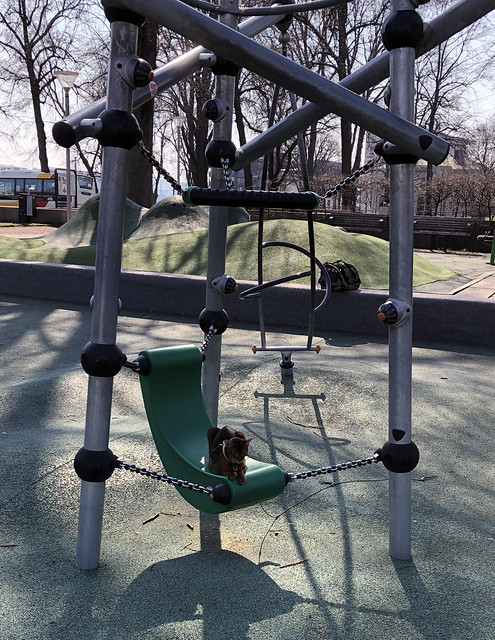 The last thing on the playground was a sort of atomic jungle gym with a bouncy chair that worked kind of like a swing. It was definitely a throne befitting His Highness. 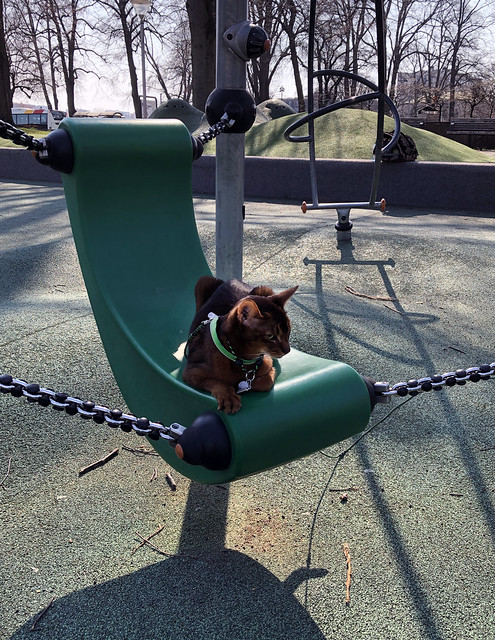 It’s hard to believe that these photos were taken only a week ago. This was how he was last Friday, curious, interested in new things, alive. And now he’s not. It’s so hard to wrap my brain around; he just declined so quickly! But I am glad that I didn’t just pass the park by; it would have been so easy to decide he was too sick, that we’d come back when he was feeling better…but I didn’t and we had one last little exploration together. You only regret what you don’t do…I am so glad I did do this. 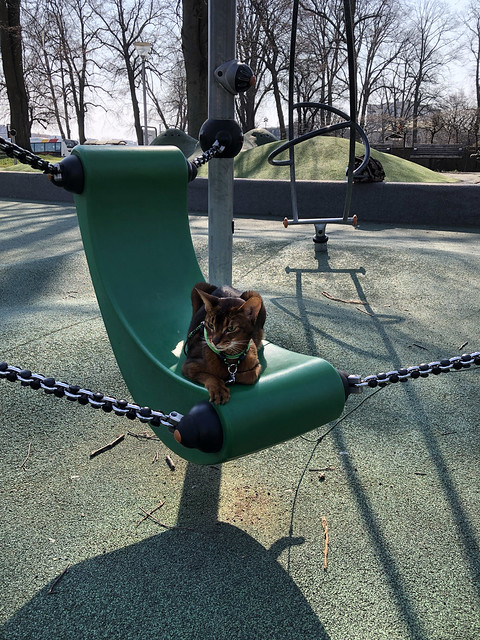 As a reminder, the insurance cap has been reached so I won’t close the GoFundMe campaign for his chemo just yet as we don’t know what his final total bill will be. Also, the insurance won’t cover his cremation. Donations are still coming in, and after Jake’s bills are paid off, I am sure there will be a good amount left over for New England Abyssinian Rescue. I will close the campaign down on Jake’s birthday, Sunday 14 April.

6 thoughts on “Aby-a-Day – 12 April: Our last exploration together (Friday Flashback)”