Even though the posts have been coming regularly every day, Björn and I have been in London since last Thursday evening. We came mainly because I got tickets for both games of the two-game series of MLB games between the Yankees and the Yankees, the first time major league baseball has been played in Europe. Even though Boston was the official home team for both games, and despite there being more Red Sox fans in attendance than there were Yankees fans…the Evil Empire ended up winning both games. But it’s been a lot of fun, and we’ll be home Thursday afternoon.

When we weren’t at the games, of course, we have been doing a lot of sightseeing and shopping. One necessary stop, of course, was Harrod’s. Whilst in the souvenir shop, there was a display of pens, 3 for the price of 2. Whilst Björn hunted for pens, I decided to test them out on the provided pads. 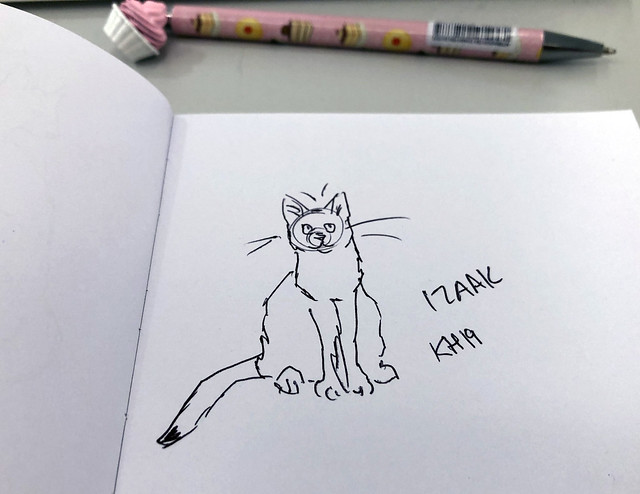 First, I drew Jacoby…but I didn’t like the way it turned out; the ears were too small. So I tried again, with Izaak. This one turned out much better. Still not as good as I’d have liked…but then, the pen I was using wasn’t the best.

Harrod’s is known for its souvenir shopping bags. I bought a rather generic one back in 2002 the last time I visited…but this time I found something much, much better! And, not to mention, Cartoon Tuesday-appropriate.

One last thing: at the first baseball game, we were sitting just in front of a Red Sox fan, Charles, from Connecticut who had come all the way to London to see a game. After the first inning, he started sketching, saying he was “a bit bored.” He was a wonderful artist! Here is the drawing he did of the game; Björn is in it, but I am not…the lines to buy merchandise were insane, so I sucked it up and went to stand in those. For four innings! If you ever happen upon this post, Charles…it was great to meet you!