The thing about going to cat shows in Sweden is, you have to travel all over the country (and also to other countries). We sometimes rent a car, but usually the rail and bus system is good enough that we don’t have to. It’s tough sometimes because the luggage for cats and humans gets heavy, and if the elevators are broken it can be a struggle. 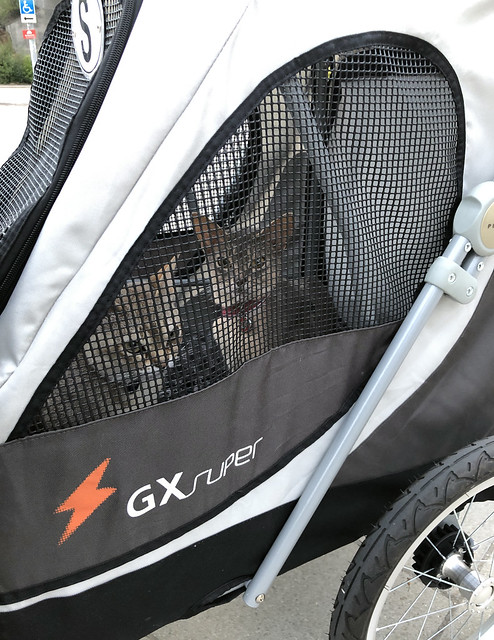 But our new super stroller makes it a million times easier. We can put things on top of it, or inside with the cats, and it can be steered with one hand (that was a problem with the previous strollers). 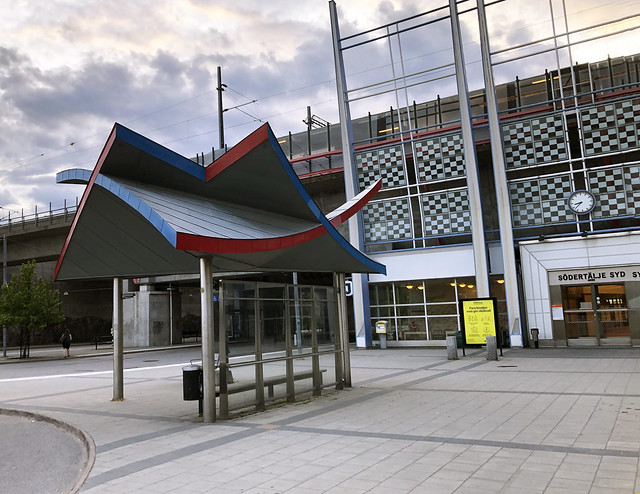 And we get to see a lot of interesting things. This is Södertälje Syd station, closest to the show and our hotel. The swoopy thing is just a shelter to wait for taxis or cars to pick people up. 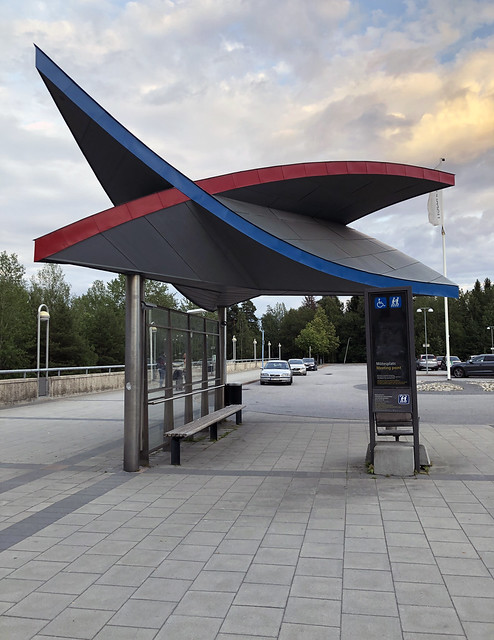 I just thought it was wicked cool. It could have been plain and boring, but instead they made it look interesting. I like that. 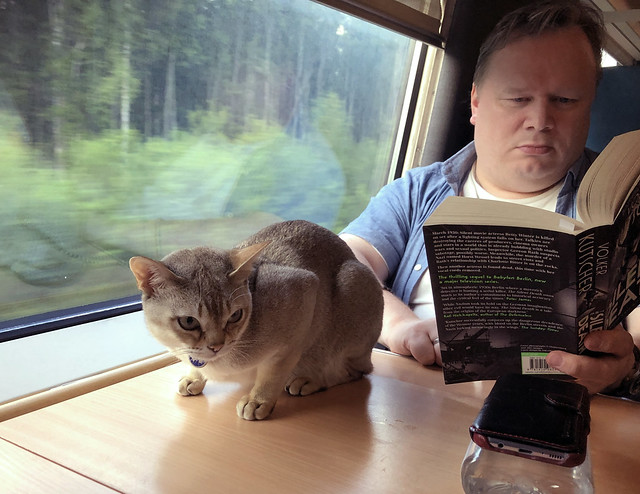 Riding the train is nice. Sometimes it can be crowded, or there can be screaming children or annoying people having FaceTime conversations. Since we have to travel in the pet compartment, sometimes we share it with dogs. 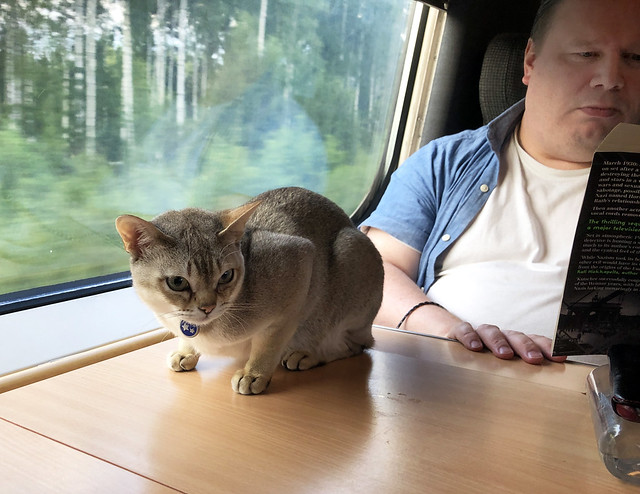 Usually the dogs are well-trained and polite, but on the trip to Södertälje, there was a Labradoodle who was not so nice. His human was seated across the aisle from us, and he was on the floor at my feet. Lorelai was chilling on Björn’s bag under the table, and Izaak was on my lap, closer to the dog. Zak’s okay with dogs, but he’s more used to small dogs. At one point the Labradoodle lunged at the cats with no warning! It even surprised the dog’s owner, it was that sudden. After that, Zak decided to sit on the table and shoot stinkeyes at the designer mutt. (I wanted to get a photo of it, but after the altercation I was afraid the woman would see me take the picture. But it looked almost exactly like this.) 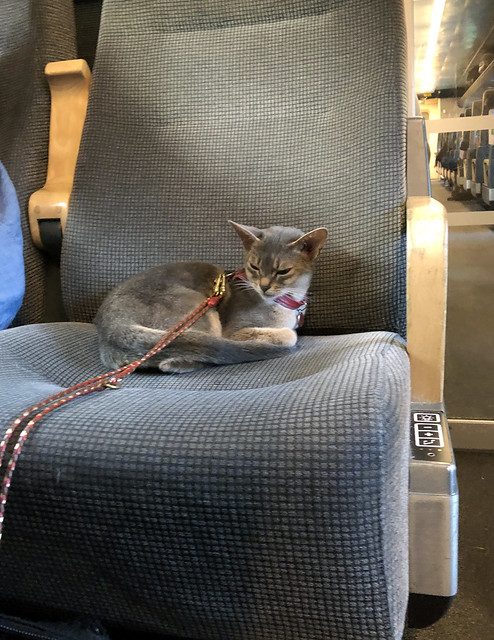 Even Rory, who likes dogs, decided that sitting on the seat next to Björn was a better idea after that. 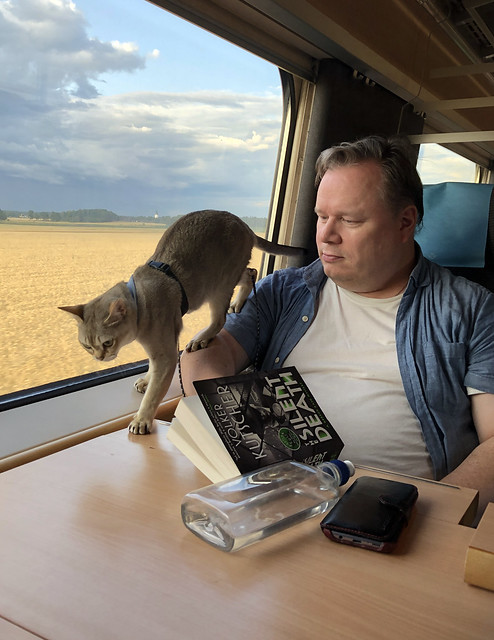 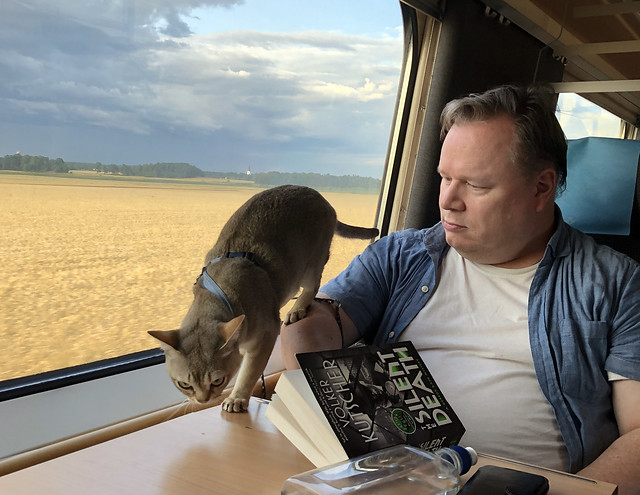 Sometimes Zak gets bored on the train and walks around. He likes to climb up the backs of the seats, too. 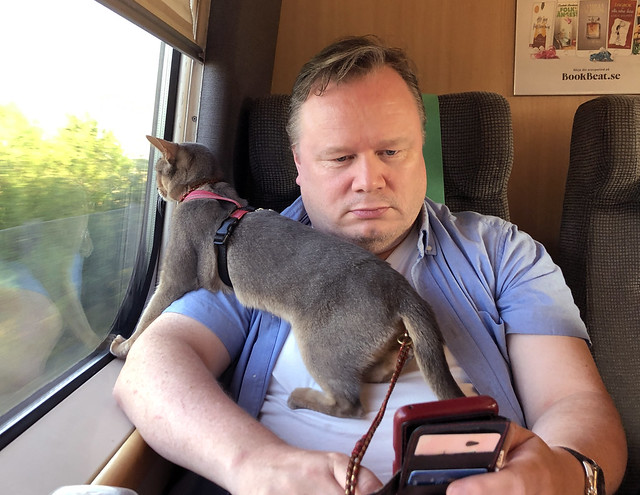 This is from the trip home, which was blessedly canine-deficient. Rory was fascinated by the passing scenery. 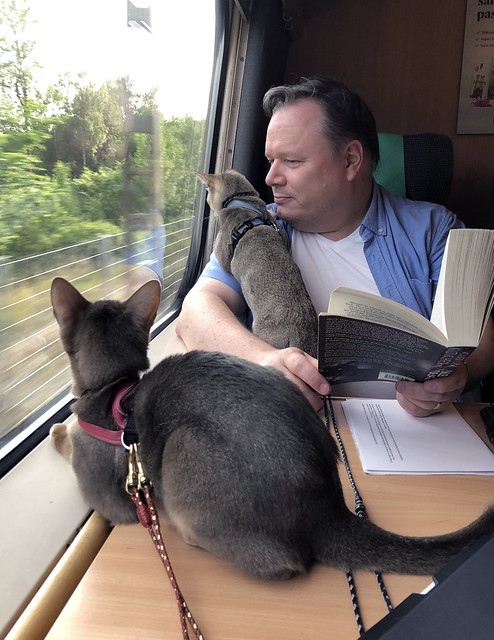 Zak also had to check it out. I love watching them crawl all over Björn…it just shows how comfortable they are riding the rails.

2 thoughts on “Aby-a-Day – 6 Augusti: “Railroad trains are such magnificent objects, we commonly mistake them for Destiny””