I have to admit, I really had no clue what a huge honour it was to be named Cat of the Year, but fortunately I’m a fast learner. Of course, seeing his face on the Jumbotron was a pretty big hint.

I was constantly talking to people, or doing something with Jake. Besides the Cat of the Year, Jake was also entered in the show (we only missed two rings, which is a bit of a miracle) and he participated as a model in the Fashion Show which was held both Saturday and Sunday. Jake is actually the first Cat of the Year to do all three things in the same show!

The show was good; Jake made a few finals. And the fashion show was fantastic. They originally wanted Jake to wear a Santa outfit…but when we saw how he rocked this turkey confection, everyone agreed that it was the costume for him! The person who made it even gave it to him afterwards, because he owned it so hard.

The list of previous Cats of the Year is impressive, indeed.

Jake was given an incredible rosette – the Scarlett Ribbon – with a photo of Scarlett, who was the very first Cat of the Year and the reason the award was created.

He was also given this certificate…

…and this poster. I was NOT prepared for all of it! 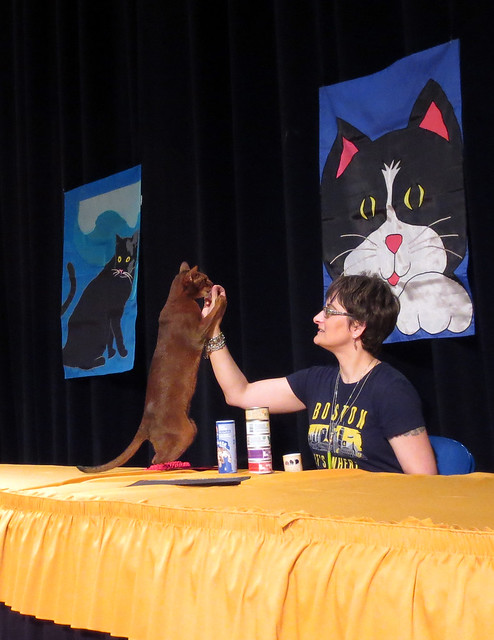 It was truly a once in a lifetime experience…but I didn’t realise that in July!