…Because I had cartoonist’s block and couldn’t come up with an idea until this morning. And I don’t have time to finish it properly, and a good cartoon that’s late is better than a half-assed cartoon that’s on time.

So, I apologise, and I’ll blame it on the snow. Everything is delayed in Boston these days…

In the meantime, I present a special LOLcat starring Jacoby.

This was made by Abyfriend Max Boutelle. You may recall Max from the story about her 18 year old cancer survivor, Moose E. Puss. I don’t know where she found this, but she added Jake to it and it made my day. Since her Moose was the star of a Cartoon Tuesday, it seems fitting that her little LOLcat be a place-saver for this week’s cartoon.

She also made this one.

I feel really bad about not meeting this deadline – in 162 cartoons, this hasn’t ever happened. I just hit a sort of wall, where I have lots of half-ideas, but no solid jokes. I finally managed to sketch up something, but I haven’t got time to colour it in tonight. However, I promise it’ll be posted later this week, and then I’ll have something for next week, too.

Right now, though, I need to feed the kitties, and then I’ve got some serious scanning and Photoshopping to do!

I am so behind on my “extra” posts, because I’ve been concentrating quite a bit on the cartoons. I have a collection of “other Aby” things to share, and this is one I’ve been meaning to get to for some time.

Weather Whiskers is a smartphone app that my sister got me hooked on last year. It’s just a weather app like the default one all phones come with…but with cats. It’s free, and it’s much more charming than the usual clouds, suns and lightning bolts that regular weather apps give you.

But you know I wouldn’t be posting about this app if it was just random cats, no matter how awesome it was. Of course there’s an Aby connection.

I’ve seen this Somali for Fog and also for Hot & Sunny. I have not seen an actual Abyssinian yet, but…

…Weather Whiskers does feature this Frida Kahlo Aby on their Facebook page banner!

I’m really not sure how or why it started, but there’s this “Feminist Ryan Gosling” meme going around the internet where random photos of actor Ryan Gosling are combined with sensitive, gentlemanly captions. Like this:

So after a couple of comments on my crafting post this past Thursday, an idea evolved…

What if I took photos of Jake and combined them with these Ryan Gosling captions?

Every single one of these captions is stolen from the Ryan Gosling meme. Word for word.

It was kind of too funny the way it was to make up new stuff.

And oddly, a lot of photos I have of Jake fit really well with the Hey Girl captions.

I was cracking myself up finding the perfect caption for each of the photos I’d selected.

The crafting ones in particular dovetailed nicely.

Yeah. That was fun.

I came across this today posted in the Abyssinian Cat Club on Facebook and had to share it.

Sometimes, one photo can just inspire you.

Among Jacoby’s Fashion Friday shots of his “I Bite Yankees Fans” shirt was this one of him giving me the happy blink:

And his expression and his posture instantly reminded me of Keyboard Cat:

So, of course I had to do this:

Now I’m kind of wondering if I should start of series of Jake-as-famous-internet-cats.

This doesn’t happen very often, but I Can Has Cheezburger is offering a reprint of one of my favourite T-shirts: 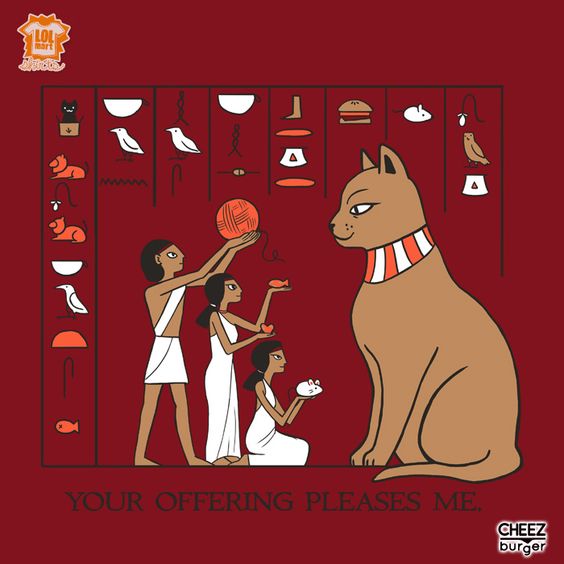 You may recall, I posted about this a year and a half ago, when it first came out. I love this shirt so much; it’s just so perfect for an Aby slave person.

Get the reprint of “Your Offering Pleases Me” for $15 including shipping now! They’re closing orders on September 3rd, and they may not bring it back again.

This is the special kind of genius that only happens at 3am: