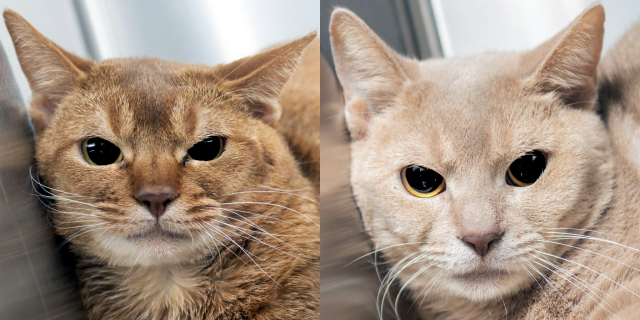 Remember back in July when I posted about the SECOND rescue of 18 Abyssinians in Rhode Island? Well, according to this post from New England Aby Rescue (NEAR), those Abys are all at the Potter League for Animals and are are now legally free and clear to be placed with new owners as their veterinarian judges them to be healthy enough to be adopted.

The first two boys available for adoption are: 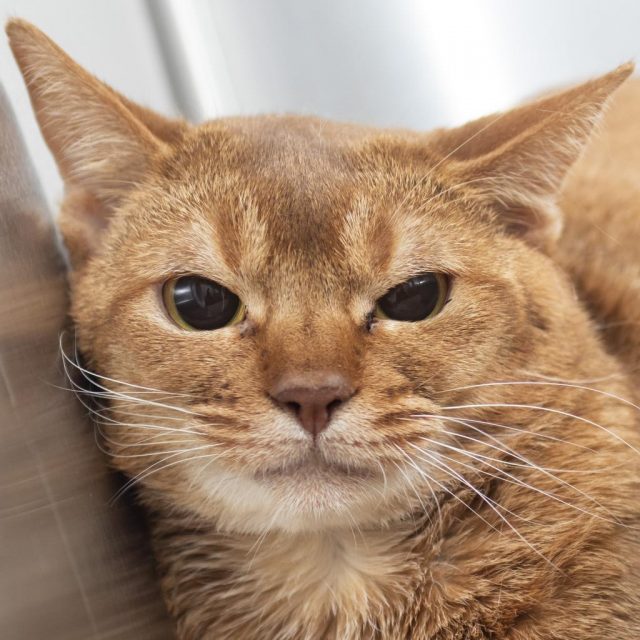 and Warner. If you are in New England and interested in either of these two young men (they are between one and two years old, the same age Angel was when I adopted her), click on their names to apply for adoption.

This is ghastly. Rhode Island Society for Prevention of Cruelty to Animals discovered 26 dead Abys in a freezer and 18 more in “very poor condition” yesterday. According to the RISPCA investigator, the surviving cats were underweight and covered in feces, but none were in such bad health that they will need to be euthanised. Well, thank StarClan for that!

But what really pisses me off is…THIS ISN’T THE FIRST TIME this person has done this! Eight years ago I posted about this exact same idiot who had 48 Abys, along with a corn snake, one dog, a turtle and two other household cats confiscated by the RISPCA. Just as last time, the cats are at the Potter League for Animals, so if you’re interested in helping to rescue one or more of these Abys, please contact the Potter League for Animals (Newport, RI), 87 Oliphant Lane, Middletown RI 02842, Phone: 401-846-8276, Email: info@potterleague.org. But keep in mind it will probably take some time to get them healthy enough for adoption.

Additionally, my friend Meg has started a donation page on Facebook in Cousin Taz’s memory to raise funds to help the Potter League help these Abys.

And now I need to go hug Angel.

There’s more news on those poor Abys in Australia that I posted about last week. This was posted in the Abyssinian Cat Club on Facebook this morning:

Hi All, the two Abys are safe…They are still in the shelter whilst transport is being arranged which should take place at the end of this week. Cat Rescue has currently received three donations equalling AUD $180.00 and there was a donation of $25.00 this morning which has not as yet been identified as being for these two babies. It is important if you donate that you send an email through as previously advised so that they can identify the funds as being for the Abys.

The tawny definitely needs eye removal (Just like Angel!) as advised by the vet associated with the rescue group. They both need full vet work and the eye removal. Cat Rescue has advised they need at least another $500.00 to come in to assist with all these costs.

I am asking those who read this and would like to donate, could they please do so via the links provided.

I will be kept informed as these two progress and be provided photos when available which I will share with you all. There are additional photos of the silver which was taken by a rescue worker that attended the shelter to look at them.” The silver Aby is the one that looked like a fawn in the original post; it looks as though he may be a chocolate silver though as he looks brown rather than black.

If you want to make a donation for the Abys using Paypal, you may do so using this link. Then send an email to fostering@catrescue.com.au so they know to allocate your donation towards the Abys’ care.

And now…here’s a video of the pair in the shelter, featuring the ruddy…who, despite his ordeal, is a sweet, lovey, cuddlebug!

Isn’t he adorable!? He reminds me so much of Jacoby it hurts. 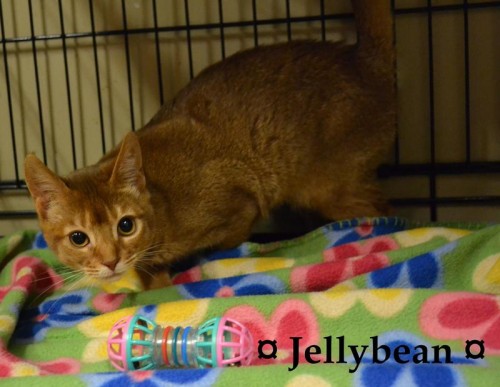 Jellybean is a four-month old Abyssinian. She has been put up for adoption because she has luxating patella, level 3 or 4, on both sides. She has no trouble getting around, and doesn’t seem to be in pain. But with time, if this condition isn’t treated, she is at risk for developing arthritis. As her condition is fairly serious, we strongly recommend surgery. Failing that, she will need glucosamine supplements or a special food for healthy joints. It will be especially important that she not be allowed to become overweight. Jellybean is adorable, sociable and affectionate. She is declawed on all four paws. Her adoption fee is $150, which includes spaying, deworming, first vaccine, and microchip.

This is super sad, and very urgent, especially considering this guy’s age.

My best friend died last week and left her 12.5 year old Aby, Bugsy. Bugsy is presently at the Marin Humane Society, taken there by the sheriff after my friend’s death. He family has given me the authority to find Bugsy a home. I want to get Bugsy out of the Humane Society and I cannot keep a cat due to allergies. Like all Abys I have ever met, he is a great personality. And a beauty. However, you should know that he has a medical condition. He has some kind of kidney disease, diagnosed about a year ago. The Humane Society told me that if he had a medical condition that they believe makes him unadoptable, they will euthanize him. That directive could come any day, ergo some urgency.

Please email or call me. I would greatly appreciate any advice. I don’t want to see poor Bugsy die. He should still have some good years left.

How tragic! If I still lived in San Francisco, I’d be there in a heartbeat to pick him up! I don’t know if Purebreds Plus is aware of this guy, but I sent an email to the woman who fosters Abys (and who I got Angel from). I checked the shelter’s website, and apparently he isn’t up for adoption right now; at least, I don’t see him on their adoptable cats page. I also can’t find his photo anywhere, but it’s all happened pretty fast.

Poor old man. He loses his human and ends up in the shelter, all in one week. I hope he can be rescued. Please respond directly to Gail (415-979-9594) or gmmcmahon@comcast.net if you are able to help.