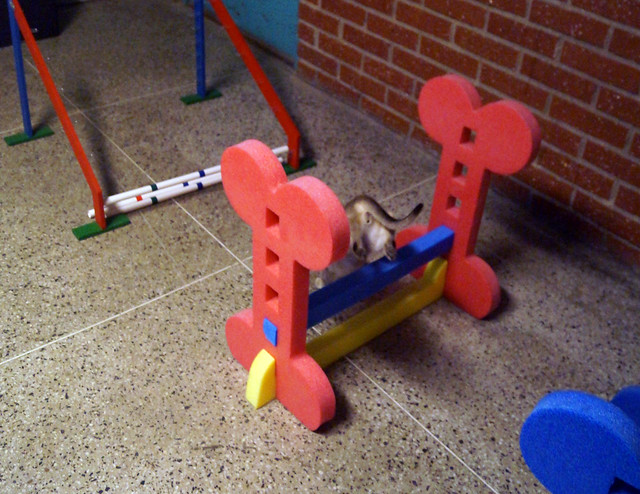 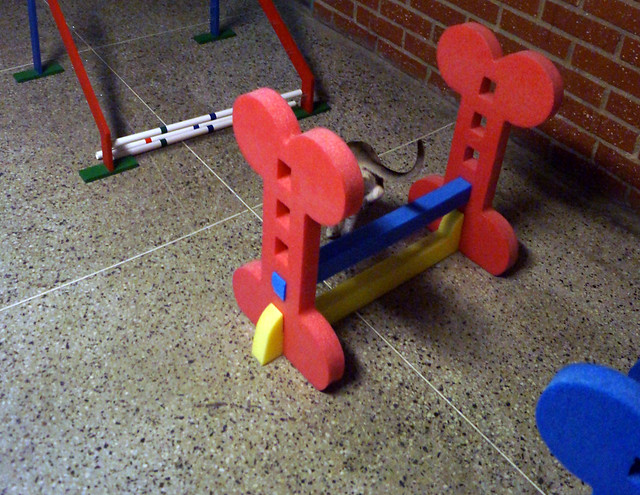 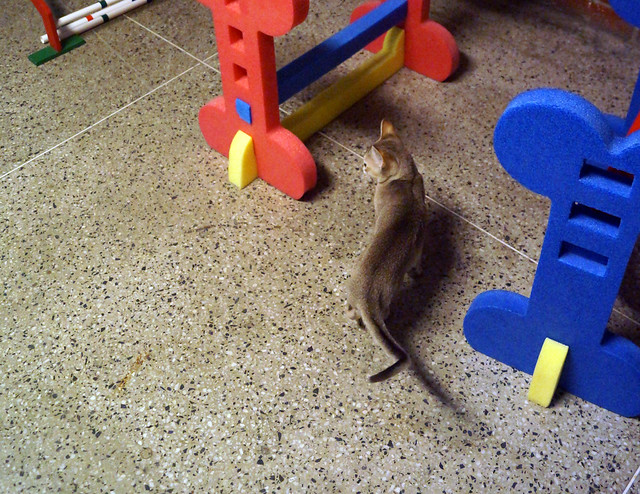 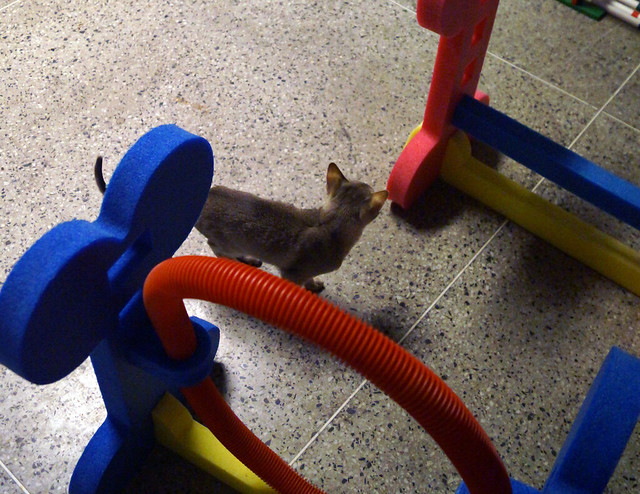 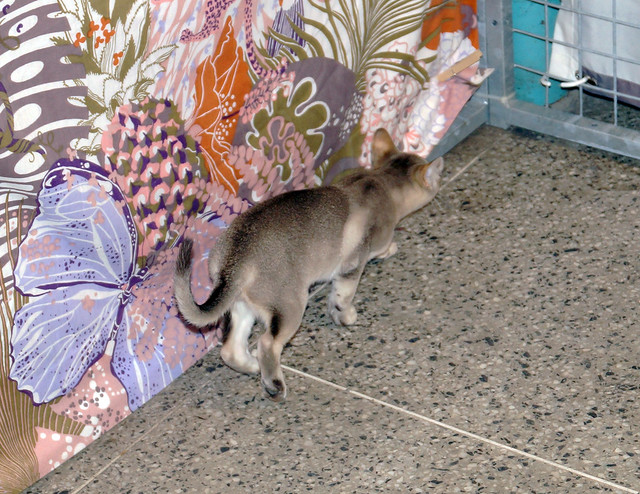 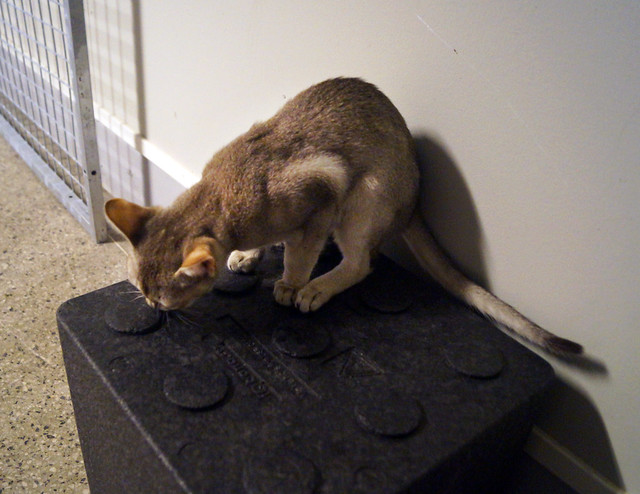 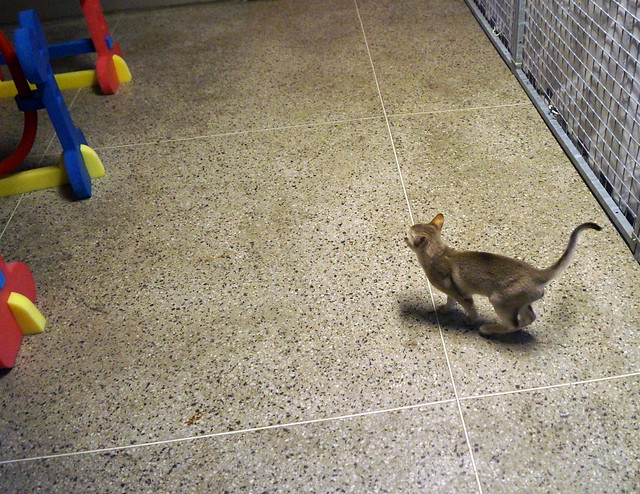 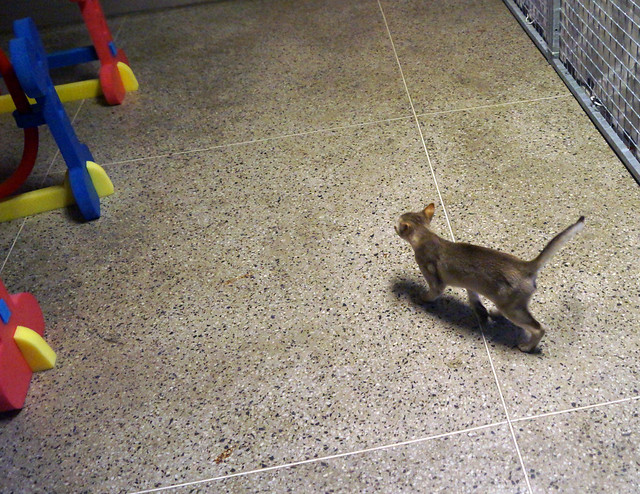 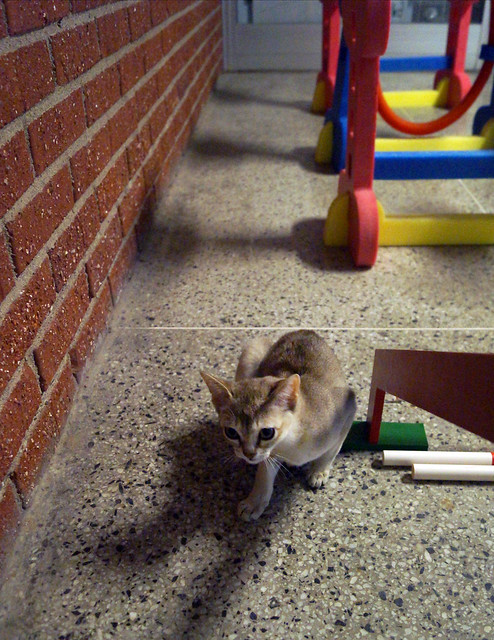 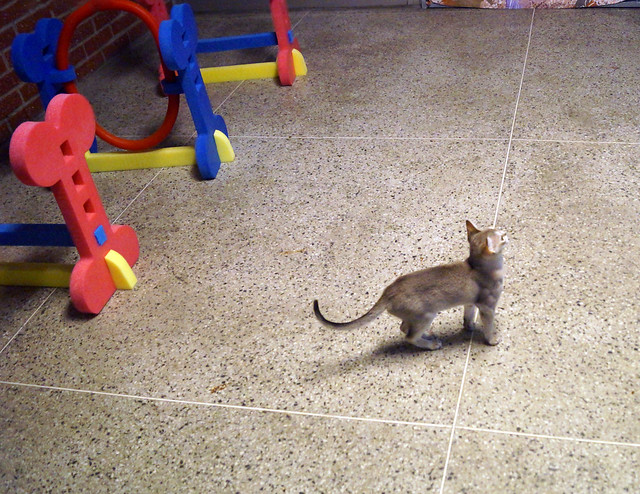 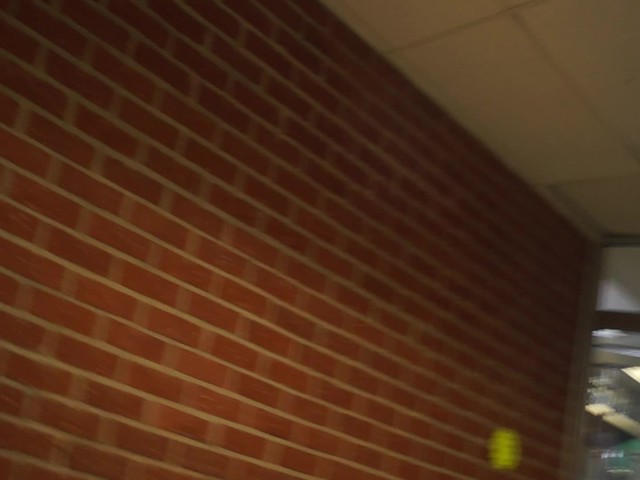 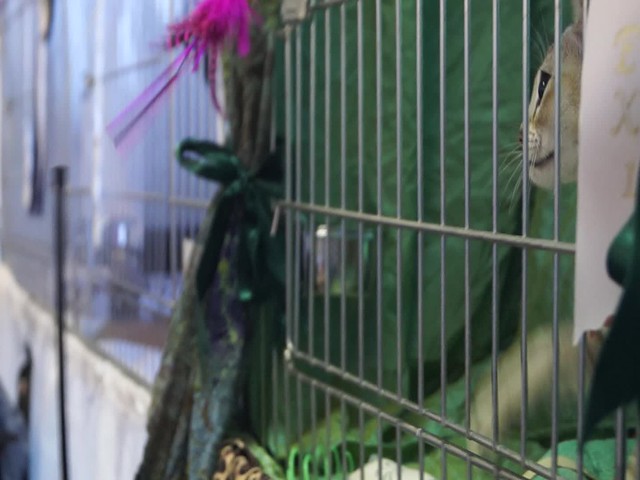 This didn’t actually happen…but oh, I wanted it to. Originally, Meg was going to bring another Aby, Ceylon Sailor (aka “Slim”) to run Agility. But he wasn’t feeling well, so she brought the kittens instead. I wanted Meg to try out the kittens – I wanted to see if they actually ran around, or if they acted like Jacoby and just posed on everything. 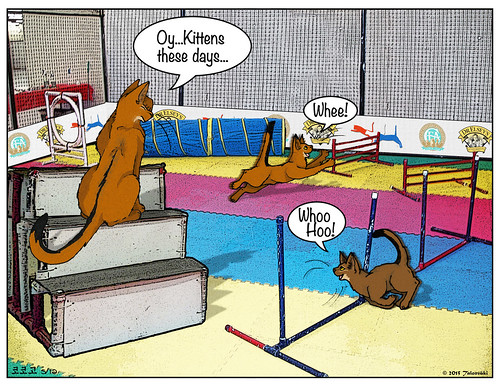 The Agility ring was really busy on Sunday, so we never got the chance to try. So…here is what I think would have happened…

So. That’s what the dictionary thinks “Agility” is.

I believe Jacoby is trying to redefine “Agility.”

Not even his beloved green laserpointer could get him to budge in the Agility run last weekend.

We did several practice runs, during which I walked him through the course so he’d know what he was meant to do.

But he was more interested in how he looked against the obstacles than he was in actually running around, over, and through them.

It was pretty funny.

The hoop, when he wasn’t using it as a prop, was his best hurdle (even if I had to give him a helpful nudge.

He went around the hurdles and he never even looked at the weave-poles.

And he camped out in the middle of the tunnels.

The “A-frame,” though, was his absolute favourite. I think he saw it as his own personal stage.

At one point during a practice, Jake noticed a small audience at formed to watch him, so he dropped everything and walked up to the front of the cage to acknowledge his fans.

Eventually I gave up, and we just had fun playing on the course.

If only they’d allow food as an enticement! I can get Jake to “dance” around the kitchen for just one Greenie. For a treat, I think he’d be an Agility cat superstar.

They say the best cartoons are those based on real life.

If that’s true, this one must be solid gold.

The second day of the cat show at the cat show started out almost exactly like yesterday. Jacoby is an…idiosyncratic show cat. Most Abyssinians you see on the judge’s table at a cat show are like hyperactive kids in need of Ritalin. They’re eager and beyond alert. They follow whatever toy the judge waves in front of them with a head tic like an epileptic at a rave.

Well…all Abys except for Jacoby, apparently. Probably because Jake has been riding the subway and playing in parks that back up to trainyards since he was four months old. He’s fearless. He’s bulletproof. And he’s, well…he’s really un-Aby-like when he’s being judged.

Basically, he’s more like a Persian than an Aby. He stands on the table majestically. He responds to the judge’s touch, but he doesn’t climb the sisal post and he doesn’t play with the toys the judge tries to tempt him with.

When Jake made his appearance in Carla Bizzell’s ring today, he was his usual, placid self on her table.

And she found this quite amusing.

“Look at this guy!” she said. “He’s like a posable action figure!”

She told us the story of an Aby she once had who was calm, like Jake. One show she took him to, they’d neglected to leave her a cage. So she put down her cage skirt, she set out the bedding, and she sat her Aby down in the space while she went to look for her cage. And he just sat there.

Meg and I laughed at this. “She thinks he’s a posable action figure now?” I said. “She should see him in Agility!”

Because Jake was better at posing in Agility action poses than he was at actually running the course.

I suppose it’s my fault.

After all, I am the one who raised him to think that life is a series of photo opportunities. He probably didn’t want to run the course because then all the photos of him would be blurred.

Still, when Carla Bizzell’s finals were announced, both Taz and Jake were called back into her ring. And she awarded Jake 7th Best Cat in Premiership.

It was a pretty interesting show, with a total of seven Abyssinians entered (2 kittens, 2 Champions, 1 Grand Champion, and 2 Premiers).

The Grand Champion was Gun-Hee and Jake’s father, Scarface Cat Pacino, and their Uncle Whitey was one of the Premiers. Of course, Gun-Hee was one of the two kittens.

I still have the catalog from that show; the other kitten was a little red/sorrel girl named Eszencia TheCountess of Jazzy Abys, and she was a month younger than Gun-Hee (who was Pellburn’s Prince Gun-Hee, so we had a countess and a prince in the kitten ring). Gun-Hee and TheCountess did have a good time playing through the bars when they were up for judging.

This was an exciting show, because not only did Gun-Hee make his very first final ring…but he was named BEST KITTEN in that ring! I was so surprised when that happened! It was my first final, too, outside of HHP rings.

But even better than the usual judging, this show had something special and unusual. This show had a Feline Agility course! As we know from our friend Twyla Mooner, Abys are generally pretty good at Agility! In fact, according to the current Agility standings, there are four Abys and a Somali on the leaderboard.

Of course I tried Gun-Hee out on the Agility course. How could I not? He was already pretty agile on the judges’ tables!

However, I have NO photos or movies of Gun-Hee’s epic run. I don’t know what happened; I did take both photos and video, but something happened to them between my camera and my laptop and they just…disappeared.

But I will never, ever, forget Gun-Hee’s performance. We walked him through the course on Saturday, and then on Sunday, we ran it for real. You’re allowed three timed runs, with the best time of the three recorded timed runs as the final score. Well, Gun-Hee, being a seven-month-old boycat, ran the course very fast, following his favourite wand toy intently over the hurdles, through the rings and the tunnel, in and out through the weave poles…he was on fire! But then he reached the final jump, and he…stopped. Halfway over. His front legs had finished the course, but his back legs had not…and the clock doesn’t stop until ALL the cat’s four feet have completed the course! Gun-Hee ended up in 4th place overall. He had the fastest time of any cat entered…up until that last obstacle. I still have his ribbon hanging in my office.

And this weekend, May 5 & 6, 2012 (the same exact days, 5 years later), Jacoby and I are going to the same show! They’re even having an Agility course this year! This is kind of huge because there aren’t a lot of shows that do Agility; in fact, the Seacoast Cat Club’s show hasn’t had Agility since that show 5 years ago!

And, in a nice little cosmic touch of symmetry, there are, once again, seven Abys entered in this year’s show: 1 Kitten, 1 Champion, 1 Grand Champion, 1 Open Premier, 1 Premier, and TWO Grand Premiers (one of whom is Jake)! This will be Jake’s first CFA show as a Grand; how exciting to have another Grand to compete with!

This was Gun-Hee after the show…he completely crashed after a show. He almost never seemed to sleep otherwise; I think it’s because he knew he had a short life. Jake sleeps all the time, but he never seems very worn out after cat shows. Of course, we’ll see how he is after trying his paw at Agility!

Sherry emailed me last night to point out that this past weekend, at the CFA National Show in Indianapolis, Indiana, an Abyssinian was named Third Best Cat in Show!

GP Hitails Banjo Mooner, a blue neutered Aby, came in as 2nd runner up behind a tortie-and-white Persian spay and a red tabby American Shorthair male out of 500 cats! 18 Abyssinians were entered; 9 Kittens, 6 Championship and 3 Premiership.

What’s funny is, we’ve met Banjo’s family recently: You may recall my Halloween post about Racy Mooner. Turns out, the Hitails Abys are quite the characters. Not only is Racy a waterbug, but her mother, Zehnder’s Twyla Mooner of Hitails, is a Feline Agility star! She’s also a CFA Regional Winner: Look at this wonderful photo from the CFA Southern Region 2011 Awards page:

Such a talented – and gorgeous – family!

(Jacoby is related to Zehnder cats via his mother Catalina’s maternal grandfather, Zehnder’s Cuba of Instincts.)

Abyssinians are supposed to be graceful, athletic, paragons of balance…or so the breed descriptions would have you believe. I have photographic evidence to the contrary.