This week’s Photo Hunt subject is “Mum.” Remember, both Jacoby and Gun-Hee were Canadian born and bred. So they both have mums. 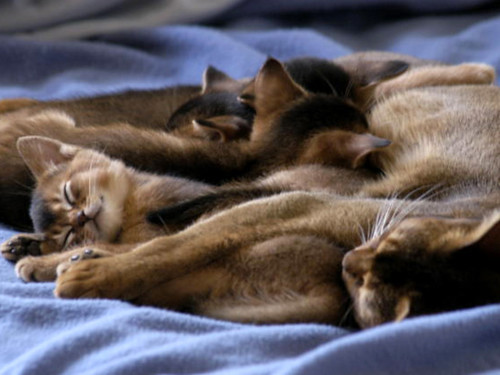 Here is Gun-Hee with his mum, Amber, and his siblings. 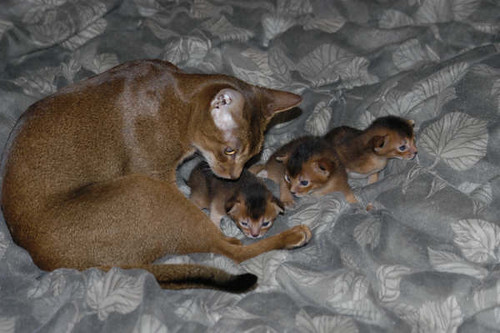 And here is Jake with his mum, Catalina, and his siblings.

Both of these photos were taken by Sherry, for which I am eternally grateful. Happy Mother’s Day to all mothers…human, feline, and mixed-species.

Here she is with Gun-Hee, his brother Rusty, and their two sisters. This is probably my favourite photo that Sherry took of Gun-Hee.

Meeting Chris Giammarinaro, the breeder of Jacoby’s mother Catalina and co-breeder of Jacoby himself, was one of the best parts of the cat show last weekend. We chatted for about five seconds, and as soon as she realised who I was and where Jake came from, she said, “Oh, we’re related!” At one point during the show, she studied Jake for a moment and then commented, “You know, he really does look like his mother.”

I thought that was interesting. I’ve always heard that Jake bears a strong resemblance to his father, Scar, but this was the first time anyone said he looked like his mother.

Of course, I’ve not met Catalina in person yet. I did get to meet Scar, though, more than once.

Of course, Jake has other “moms,” too. Tessie, our only cat who has had kittens of her own, frequently mothers him.

And he loves it, too.

Kylie is more of an aunt or a big sister to him.

But that’s important, too.

Angel was his Abyssinian role model when he was a kitten.

And of course, he decided I was his “mommy” right from the start!

I never met Gun-Hee’s mother Amber, either…but Sherry took this incredible photo of her with Gun-Hee and his littermates.

This is the image I think of when I think of “Mother’s Day.” This photo is so lovely.