If you are a regular follower, you know the story behind Angel’s eye. You may also remember we took Angel to Angell Hospital to see an Dr. Biros, an opthalmology specialist.

Back then she was diagnosed with open chronic inactive keratitis with corneal scarring, a result of her early Feline Herpesvirus that took her left eye as a kitten. 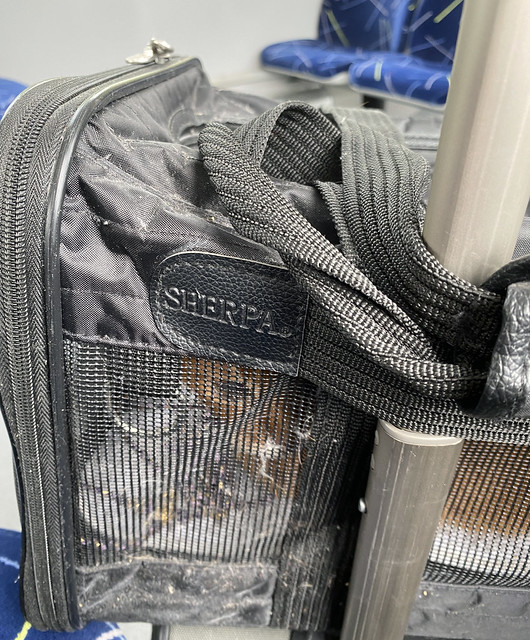 So, this morning Angel and I took the long bus ride to Min Veterinär. 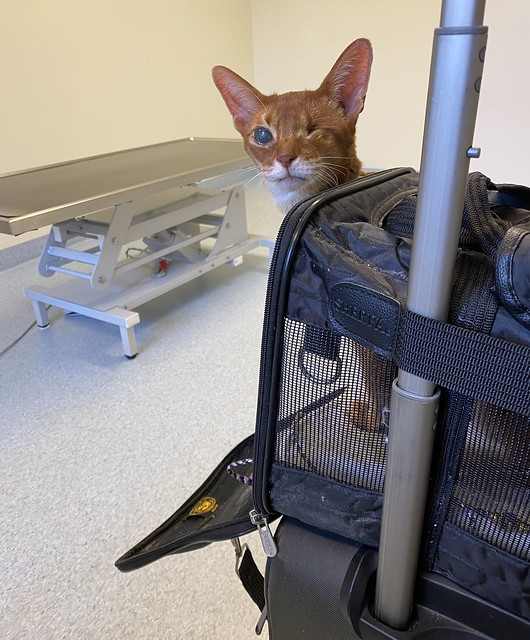 “Wait, what? I was just here yesterday!” 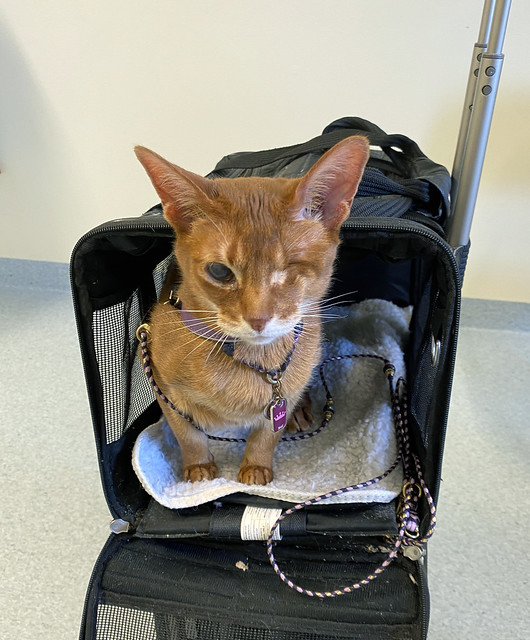 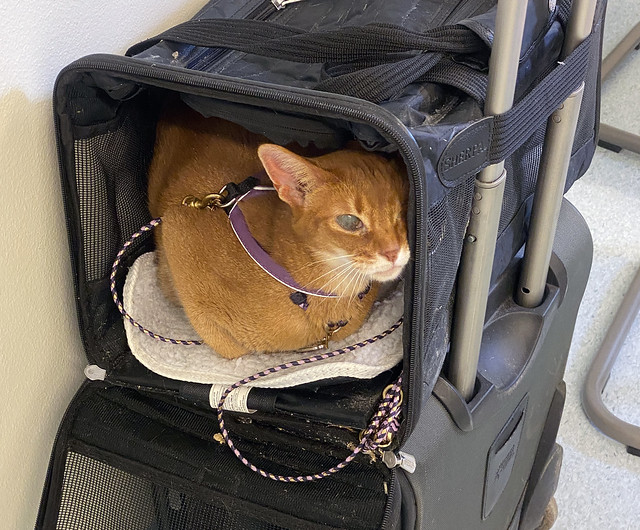 She waited in her carrier for the doctor and her assistant to come in. 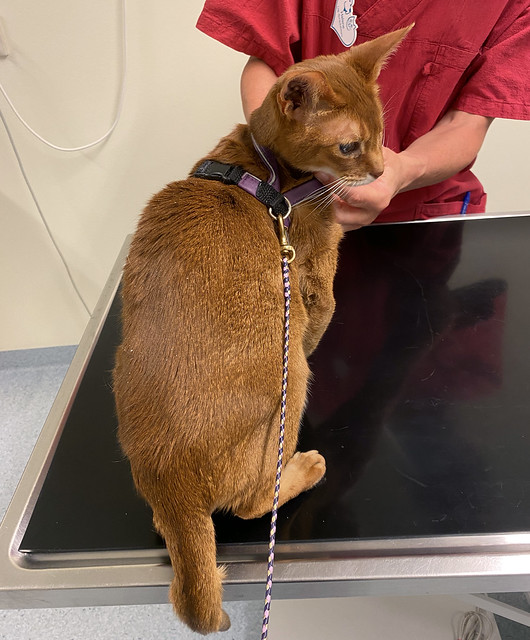 First they put some drops in her eye to dilate her pupil. 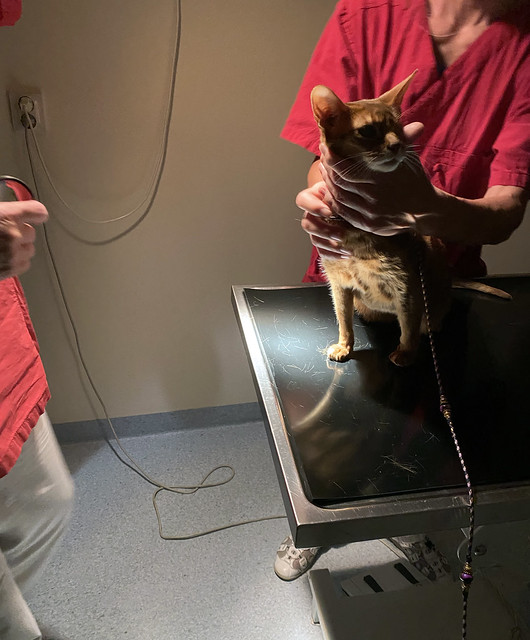 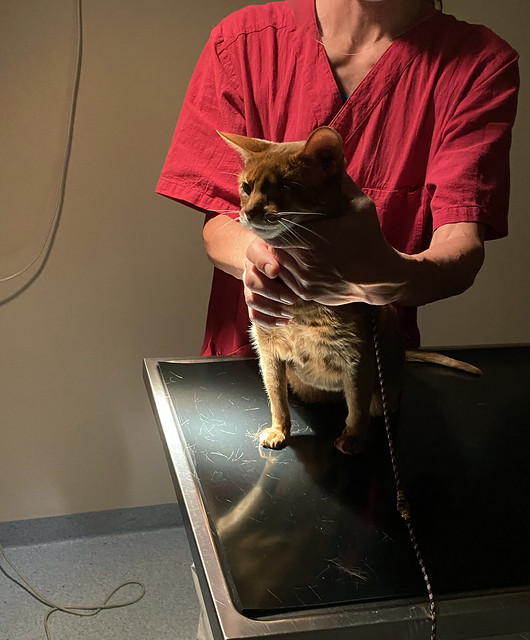 Then the lights were dimmed. 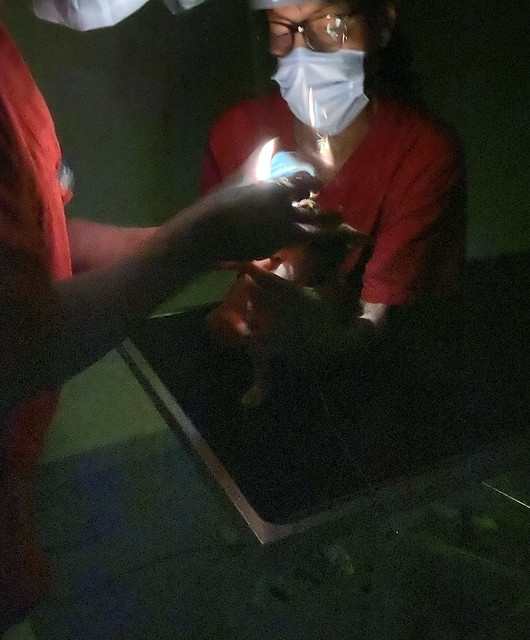 And the doctor shone a light into Angel’s eye to examine the cornea. 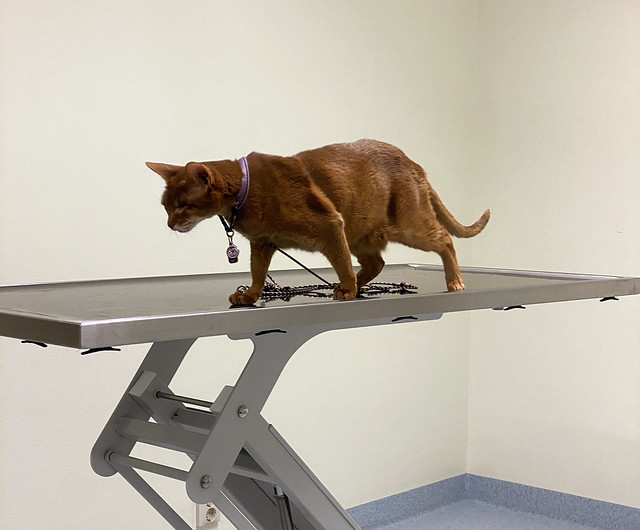 Then we decided to check her blood to see if there was anything systemic going on. 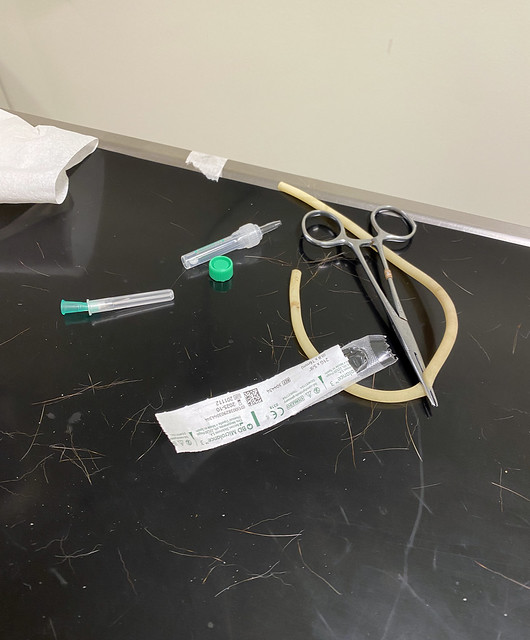 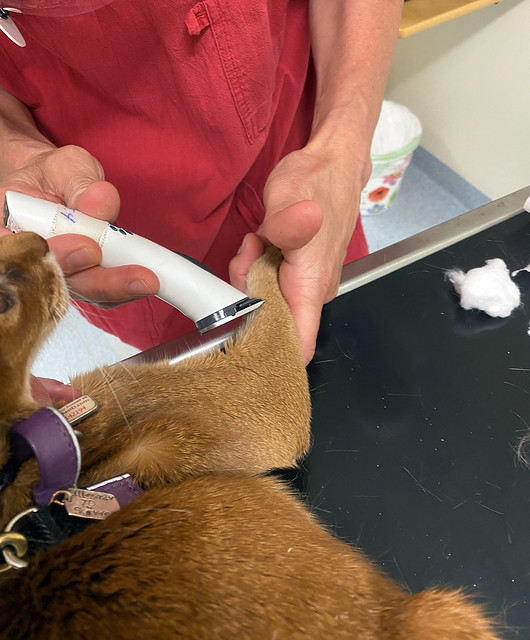 First, of course, we had to shave her leg. 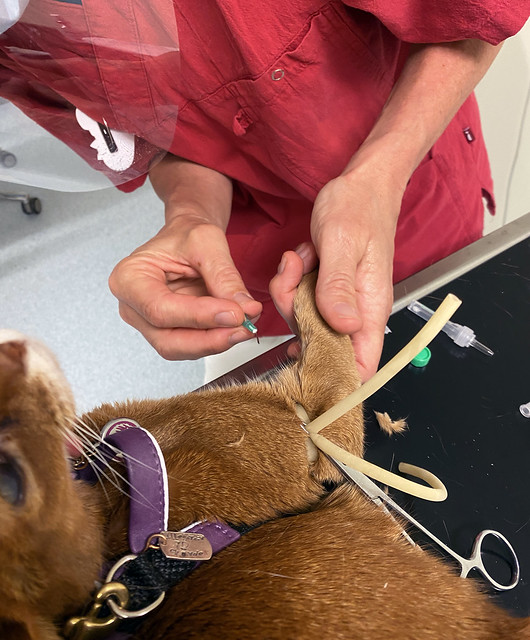 Tomorrow is her 14th birthday, and I don’t think she’s ever had her blood tested. Even without any eye problems, it’s a good idea to see if there’s anything else we need to worry about. 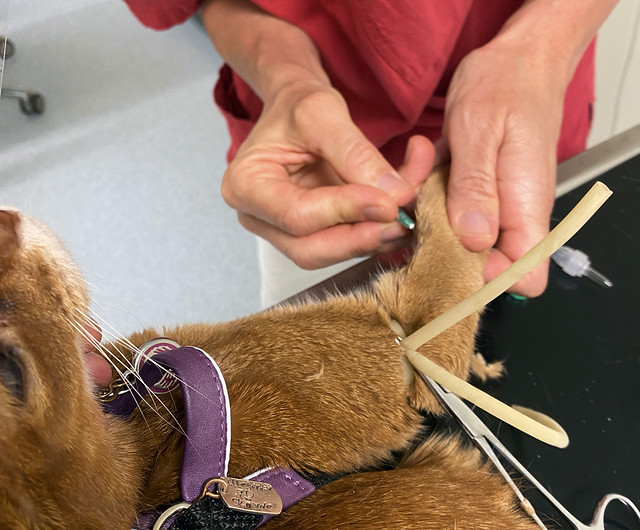 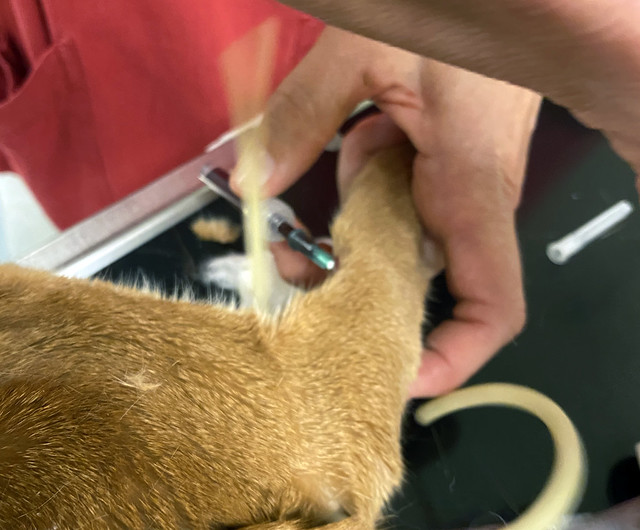 And then we were done. 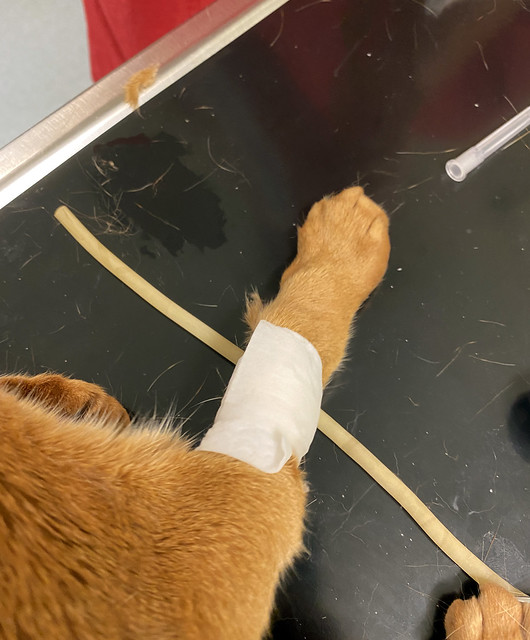 She was a very good patient. 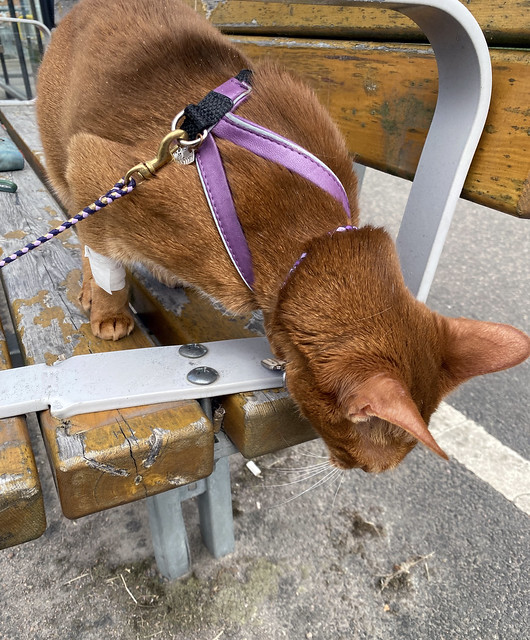 Then, we had to wait for the bus back home. 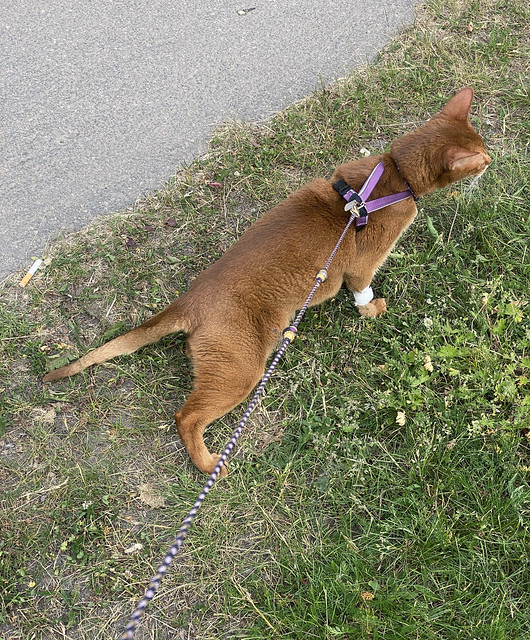 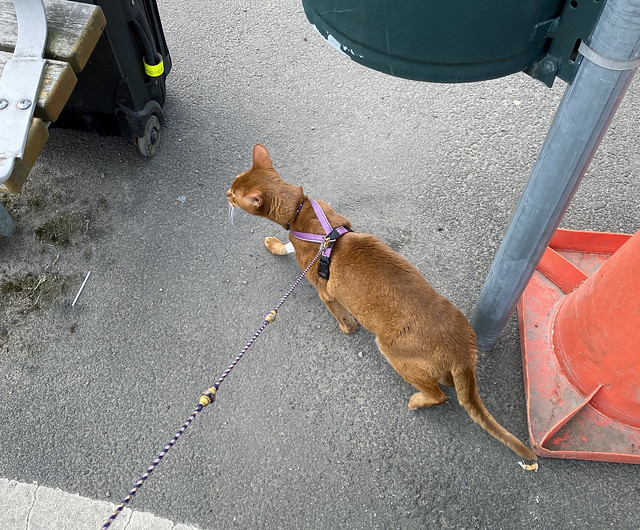 We had just missed one bus, so we had a 14 minute wait for the next one. I let Angel out to get some air. 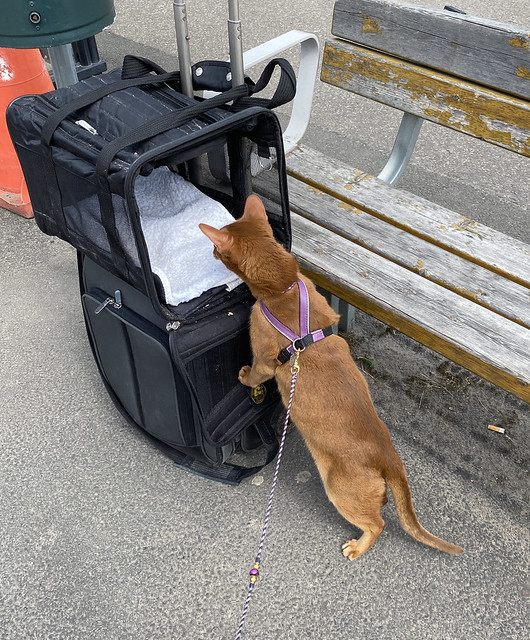 She was good, and went back into her carrier when she was finished exploring (not that there’s much to explore at that bus stop). 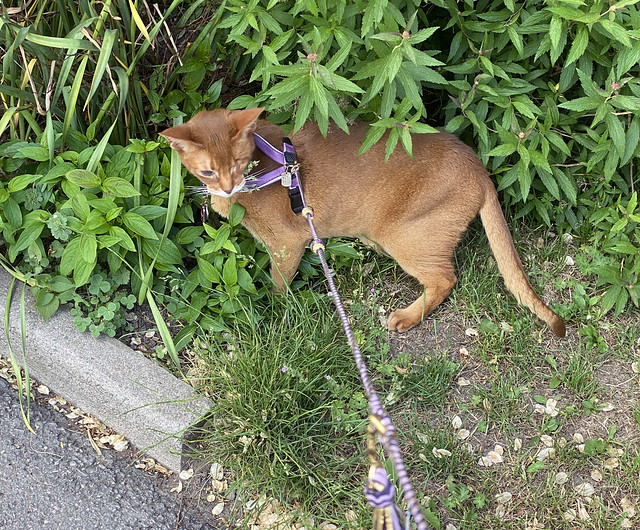 When we got off the bus at home, I let her out again. She walked part of the way… 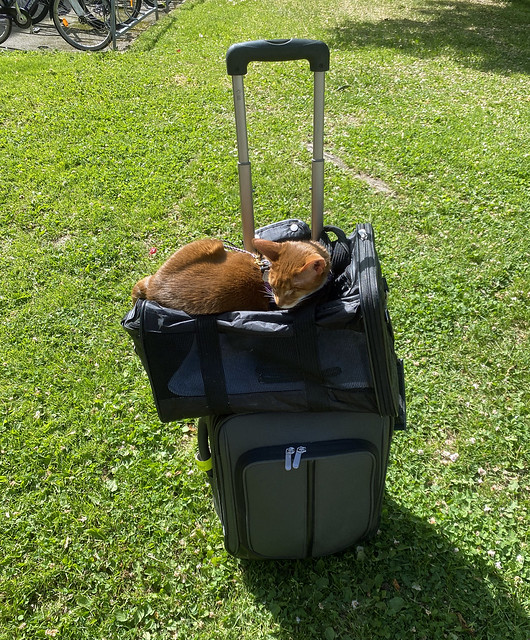 …and rode part of the way. 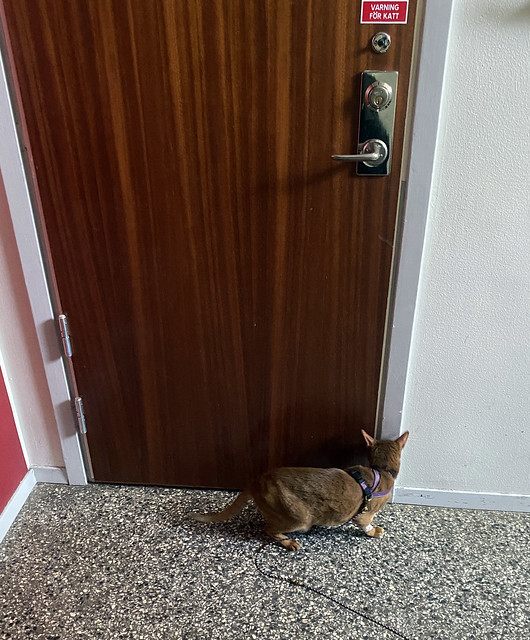 After two trips to the vet in two days, we were both happy to get home. 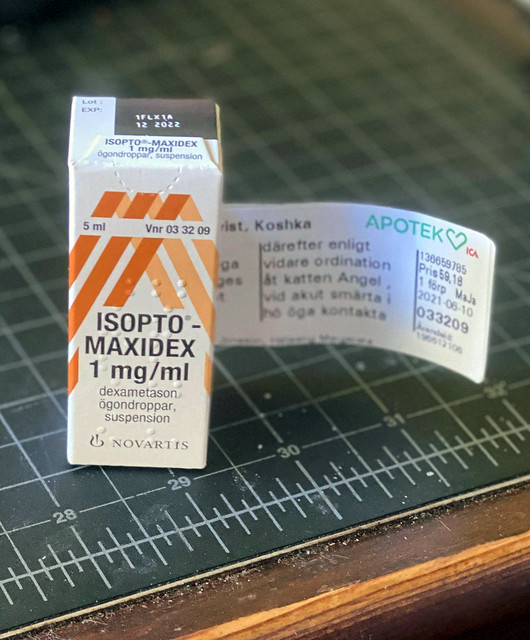 Apparently, her previous open chronic inactive keratitis has been activated. The doctor prescribed Dexmethasone drops, so hopefully that will deactivate her keratitis.

Kylie recently needed to go to Angell Memorial to have a vet check-up.

It’s nothing major; just a follow-up on some chronic congestion that we think may be Feline Herpes Virus-related.

He kept her company in the examination room while Dr. Johnson discussed Kylie’s sniffles with us.

He also patrolled the waiting room.

Which is important, because there are dogs there, too. Kylie’s not as used to being around dogs as Jake is.

Speaking of therapy visits, though, you may have seen some articles in the news about therapy dogs being sent to Boston to comfort victims.

I find this rather ironic as Jake and I were not able to make our usual therapy visit to Tufts this week as the hospital is still on high alert and is closed to non-essential personnel (“Access to Tufts Medical Center will be through the Emergency Department, Biewend or the Floating Hospital crossover entrances. All other entrances will be closed. Please have your I.D. ready and be prepared to have any bags checked”). We are still waiting to hear when we might be able to visit victims along with our regular patients. And I am hoping that we can come back to visit Jake’s friends next week as usual.

However, things like the above are happening here in Boston; there are armed guards like the one above stationed not only outside Tufts Medical Center, but in various places around the city, including Post Office Square in downtown, which is near where I work.

It’s just kind of interesting that there are all these stories about therapy dogs flying in from all over the country when we locals can’t make our regular visits. However, it’s also important to note that these dogs are not certified with the same organisation that Jake and I are. They also seem to not be going into hospitals so much as they are going to the areas that are open – or partially open – to the public, such as the runners’ bag pick-up area at the finish line on Tuesday, and making impromptu independent “vists.”

Jake and I are certified with Pet Partners (formerly known as The Delta Society) and have been visiting since 2010. Pet Partners’ animal-assisted therapy program was established in 1990 to ensure that “both ends of the leash,” people as well as animals, were well-prepared to participate in animal-assisted activity and animal-assisted therapy programs. Pet Partners’ Therapy Animal Program is the only national registry that requires volunteer training and screening of animal-handler teams. They’re also the only program that accepts a wide range of species of domesticated animals; registered Pet Partners include not only dogs and cats but also guinea pigs, rabbits, domesticated rats, horses, llamas, donkeys, pot-bellied pigs, Cockatoos, African Gray Parrots, chickens and ducks. As a matter of fact, there’s a miniature horse named Lily who also visits Tufts Medical Center! (Lily also had to skip her visit this week.)

This is the letter that Pet Partners sent out to registered teams, dated 16 April:

We have received outpourings of concern from our therapy animal teams for the people affected by the tragedy in Boston. We share with them and all our nation the grief for those killed, concern for those injured, and for the many other people, friends and families who have been affected.

We truly appreciate offers from many of our teams to travel to the Boston area to comfort those in need. At this time, we ask that teams wait until we have coordinated efforts with local agencies and our local representatives and have determined the situations and settings in which animal-assisted interactions can best be utilized. Once these efforts are determined, we will communicate them to teams residing in the Boston area and will call on teams outside the area for additional assistance as needed.

Thank you for your concern and willingness to help,

The Staff of Pet Partners

So don’t worry…we’ll be back as soon as we can!

Jacoby’s most recent veterinary experience started me thinking about how close a relationship he has with our local vet. Of course, they are literally just up the street from where we live, so we’re neighbours, too. But Jake and the vet seem to have a special relationship that the other cats don’t really have.

It might be because he and I went there for the first time on the third day after he came to live with us.

Even at the tender age of 3-1/2 months, Jake was fearless in the face of thermometers and needles.

He had a few memorable trips to see Dr. Natalie during his first year. Like the time he had Giardia (which, thankfully, there are no photos of). And we still talk about his neutering, when he woke up from the anaesthetic before 11:30 and promptly started shouting the place down demanding to be fed!

It was when he got his foot caught in the escalator at the Broadway T station, however, that Jake’s affair with the vet’s office really took off. When we came in that Saturday morning, Jake was so calm and so trusting he impressed the entire staff. He barely needed to be held down while his foot was cleaned and examined and his wound glued together and bandaged; he just sat quitely and let them fix him, never growling, hissing, or even flinching. He was amazing.

(This was also our first experience with the kitty painkillers. He’s had those little syringes so many times I’m starting to think he may be at risk of becoming addicted to prescription drugs!)

We had to go in several times following the initial emergency visit to have his wound checked and his dressing changed.

It was late October and chilly in Boston, so Jake also got to show off his wardrobe!

His foot healed well, and today the only reminder of the incident is a slightly thicker claw on one toe.

It was only five or six months later that Jacoby had his first urinary tract infection.

(This was highlighted with our first attempt at getting a feline urine sample.)

After all that, seeing the vet for his annual check-up and vaccinations was a cakewalk.

He tends to treat the waiting room as just another room he hangs out in, now.

He’s very comfortable and relaxed, unlike most cats in the vet’s office.

Heck, he’s more relaxed than I am when I go to see my doctor for my annual physical!

Interestingly, his calmness carries over to other veterinary hospitals. He’s just as happy in the waiting room at Angell Memorial, although he’s less familiar with it (thank goodness!). Of course, I’m sure his therapy training has something to do with his medical familiarity.

I also tend to bring him along even when he doesn’t need anything done, as moral support for the cat who is being seen by the doctor. It also reinforces that the vet isn’t a “bad” place. It’s just a place we go and it might smell funny, but it’s no big deal.

He sometimes calms the other cats during a vet visit all on his own. It’s really sweet to watch him do this.

Despite all he’s been through, Jake still really loves going to the vet.

So much so, he even has his own set of scrubs! Maybe someday he can become a veterinary office cat, and welcome the kitties who come in to see the doctor. Come to think of it, we could even start calling him “JD”…

This morning, I was woken up by Jacoby…digging in our comforter. I wasn’t sure what was going on, but I grabbed him and put him in the litter box…and nothing happened. He assumed the stance for several minutes, and nothing came out. Then he tried the other box, and a couple of other non-box places (which he never does), so I knew something was up. It was too much like the last time he went from box to box but didn’t pee.

We may have had other plans this morning, but I don’t remember what they were anymore; we bundled him up and took him to Angell Memorial, which is open twenty-four hours a day, seven days a week.

I often say we’re lucky to live in Boston and have such a world-class pet medical facility right nearby. Not that anyone wants to have to go to the vet on a Sunday morning, but it’s nice to know that the option is available.

The good news was, he wasn’t blocked. He probably had a crystal flare-up in his urine, possibly because we tried to stop giving him his daily UT treats. He’s already on Clavamox, for his sniffles, which he started yesterday; to that, Dr. Baker added Buprenex, a pain reliever, and Prazosin, which reduces spasms in his urethra.

He also got a flat of Hill’s c/d seafood canned food, and the instruction for us to feed him more canned food and less dry food. I’m sure he’s really going to love that last prescription! He gets to eat it in his cat show cage, which I think he really enjoys, too.

Which just goes to show you, you never know what the day will bring when you have cats. Poor Jakey! He’s currently snoozing on the bed next to me…between not feeling well and all his medications, he’s been very cuddly this weekend.

I’ve entered Jacoby in Humane Society’s Spay Day 2011 Online Pet Photo Contest. I signed up to help a local animal charity connected to Angell, MSPCA at Nevins Farm, so you may have to donate to vote, so don’t feel you have to vote if you don’t want to spend the money.

When I signed up, I didn’t realise they were asking for donations in exchange for votes. But I’m on my post-operative medications, so my reading comprehension may not be 100%. I got it via my Zazzle account, and it was presented more as a photo contest. And I couldn’t resist entering this photo:

So, if you’re up to it, please…vote for Jake?