Yesterday, we took some recycling out to the bins, and of course the cats came with us. Which, of course, drew the kids in like a magnet. 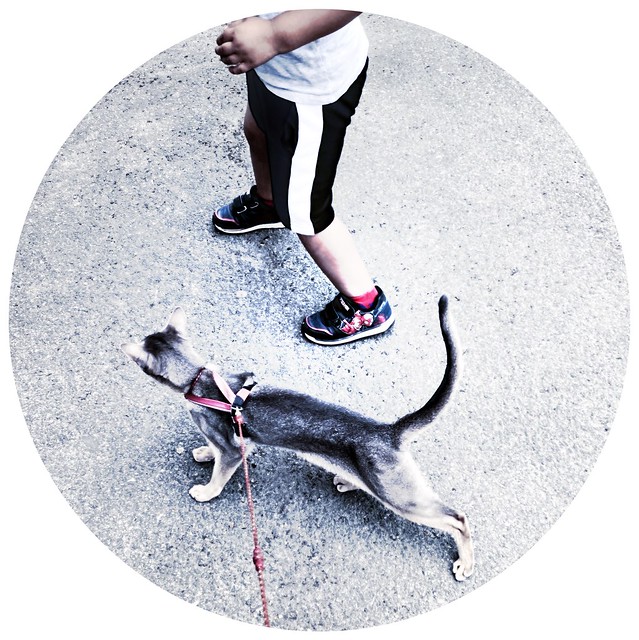 This one little boy, who we’ve seen outside as long as we’ve been taking the cats out, loves the cats… 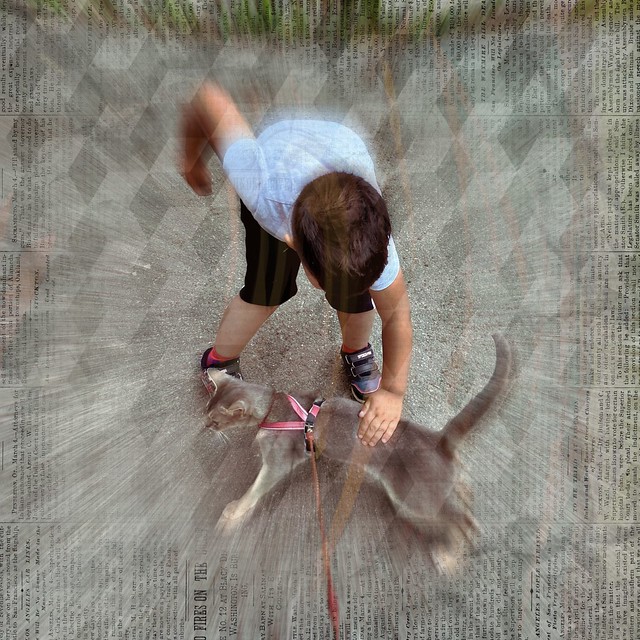 …but his love tends to involve happy shrieks and picking them up. Alfred and Izaak generally get enough love and prudently run away and hide in the bushes. But Lorelai on her leash is a captive audience for his attention. 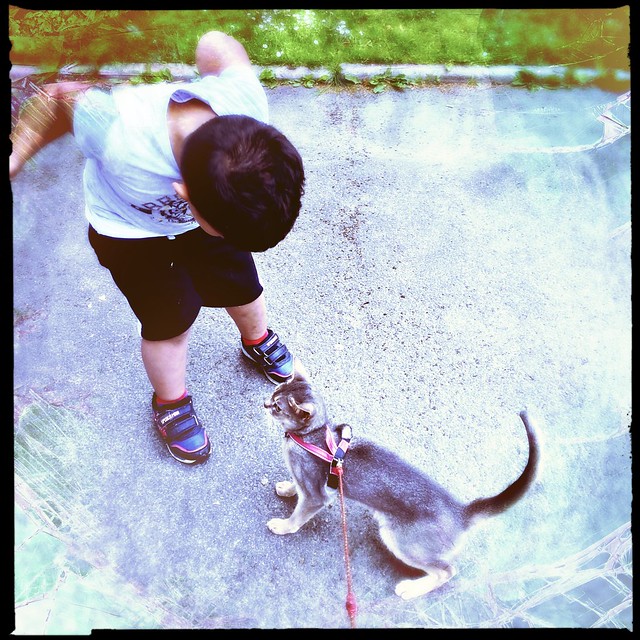 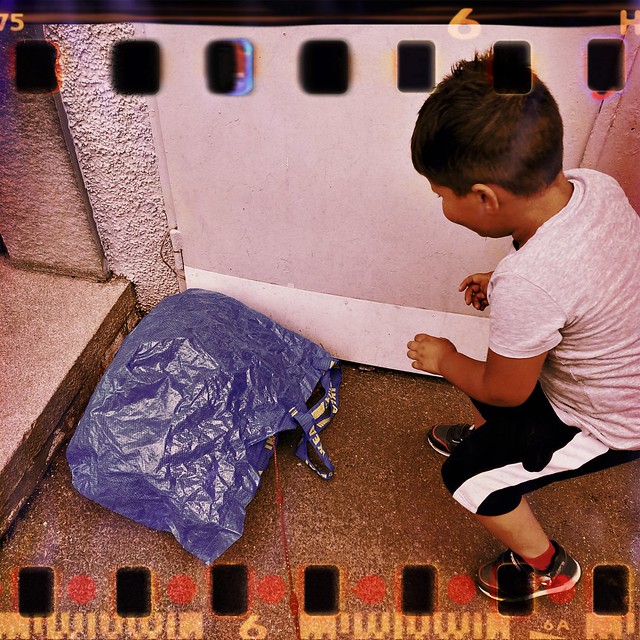 Eventually Rory went into one of our recycling bags. This fascinated the boy. 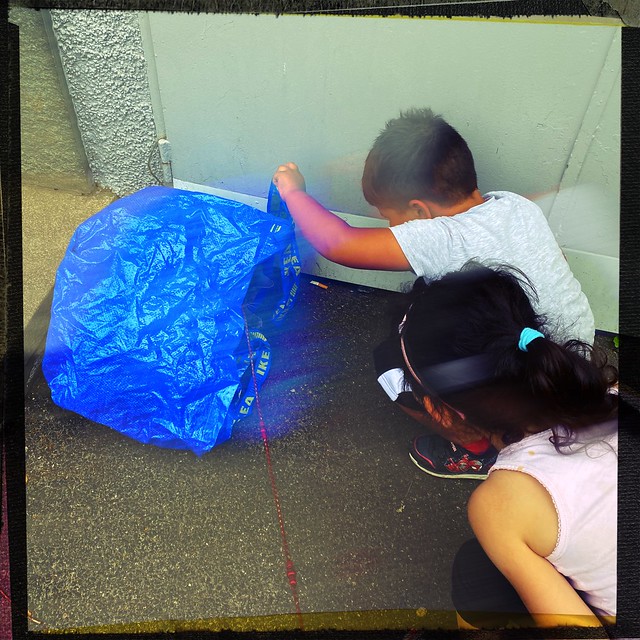 It also brought a little girl to look at Rory in a bag. 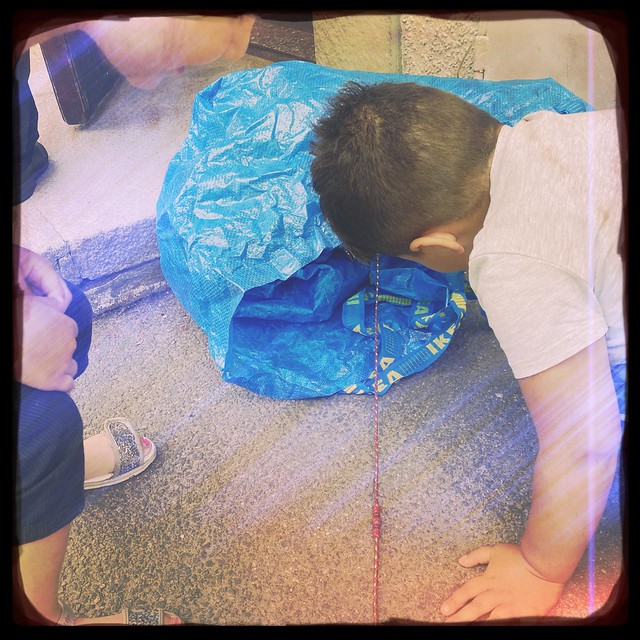 They had a pretty good time playing with the bag, Rory and the kids. It was cute to watch. 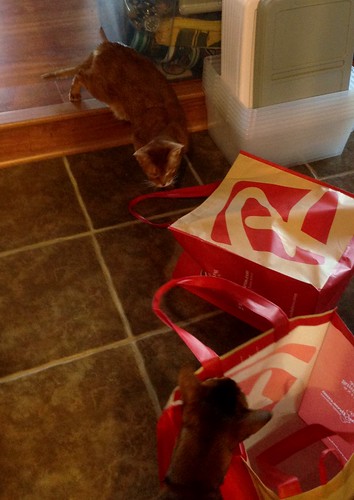 Angel and Jacoby love it when I come home from the market. 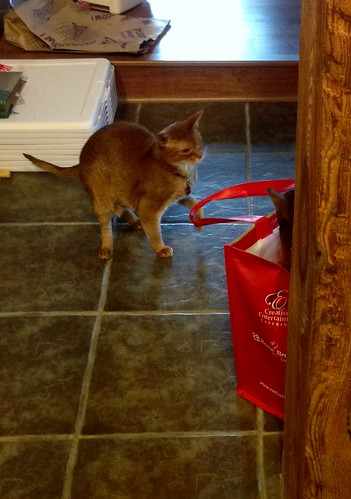 Angel is always interested in whatever is going on. 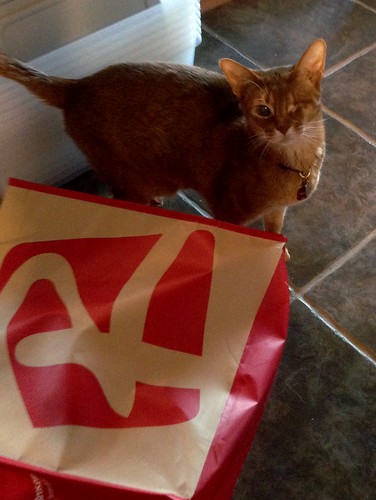 She may be a little tentative about it, but she’s still a curious Abyssinian. 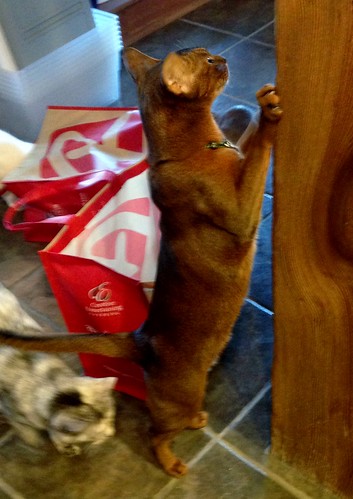 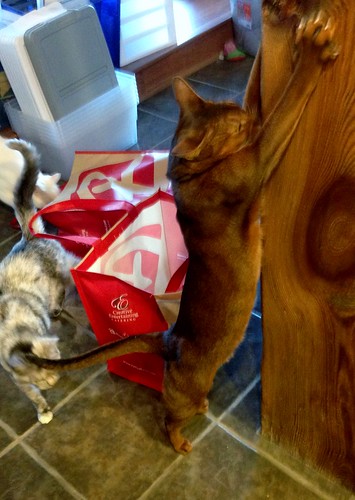 …streeeeecccchhhh! It’s like he’s so excited he has to do something physical while he’s waiting. 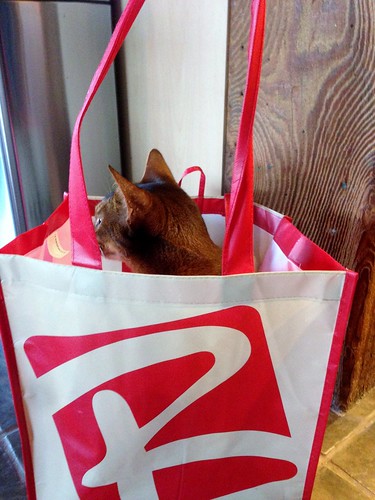 Because you know what he’s waiting for, right? 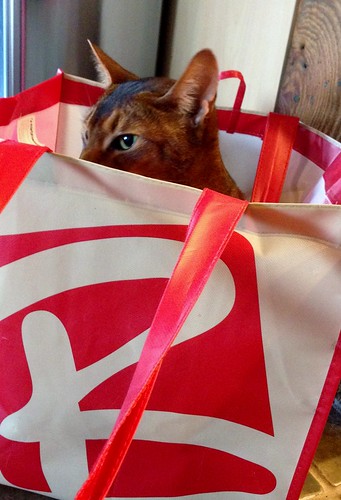 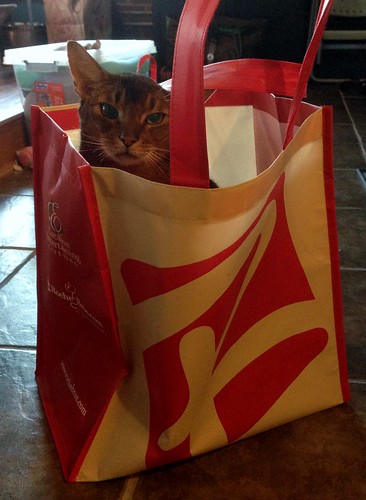 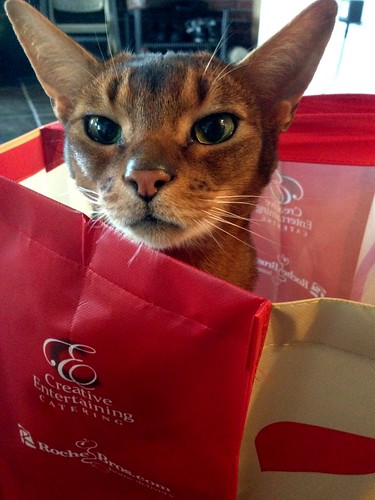 And this market, as I’ve mentioned before, has really awesome shopping bags. 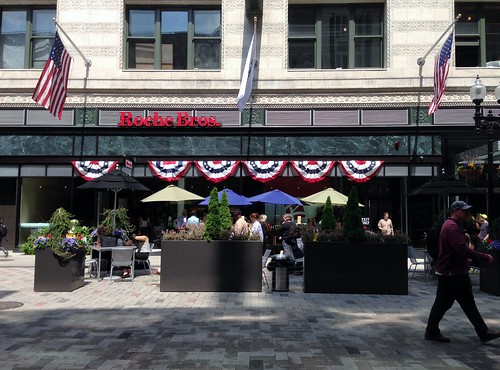 So, even though I still really miss Filene’s Basement, I’m happy we have a food market in Downtown Crossing now – it certainly came in handy when I was looking for my Thanksgiving pheasant!

So Roche Bros. opened a store in Downtown Crossing. This instantly became the easiest place to buy groceries, because it’s only two T stops from our building. 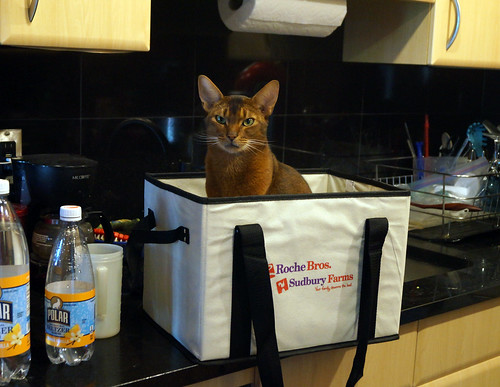 The last time I went, I forgot to bring any bag with me. 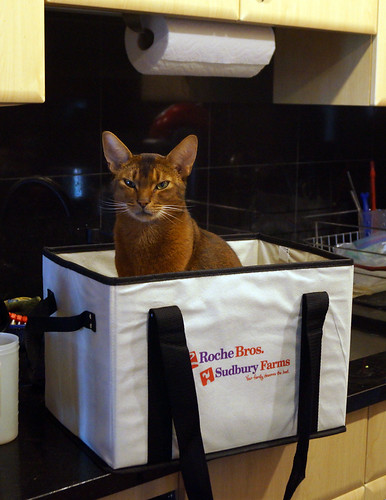 So I picked up this cool, folding, box-bag thing. I think it’s meant for the trunks of people’s cars. Jacoby clearly thought it was for him. 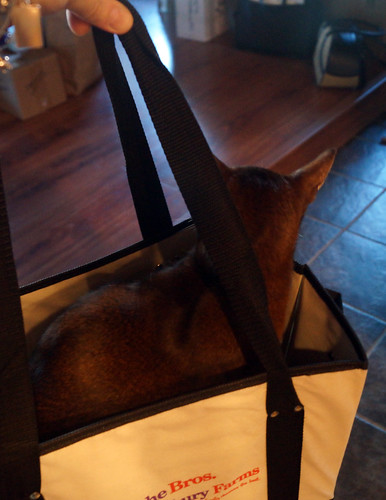 So I gave him a little ride in his box-bag. 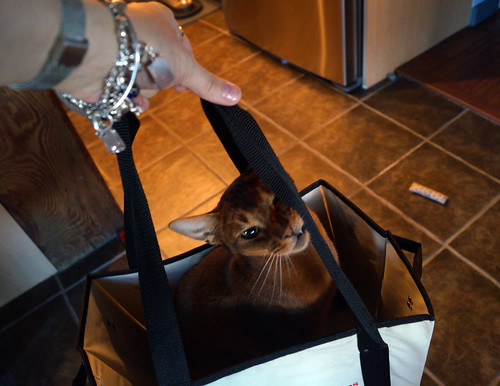 As you can see, he hated that. 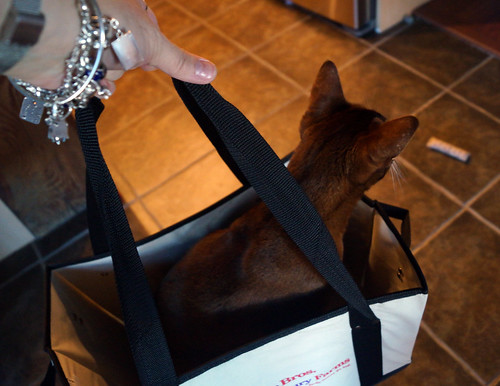 Jake just loves to go for rides in things. 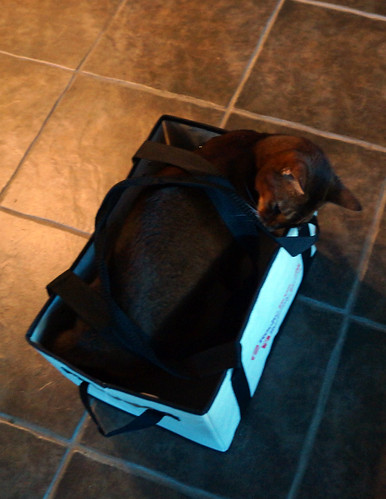 He seemed a little disappointed when I set the box-bag down on the floor and went to put away the groceries I’d bought. 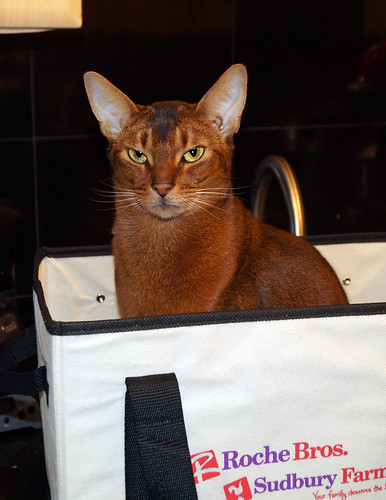 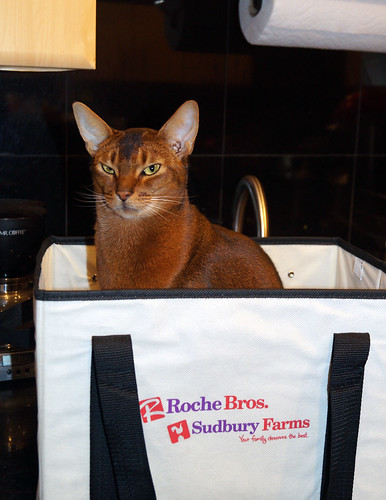 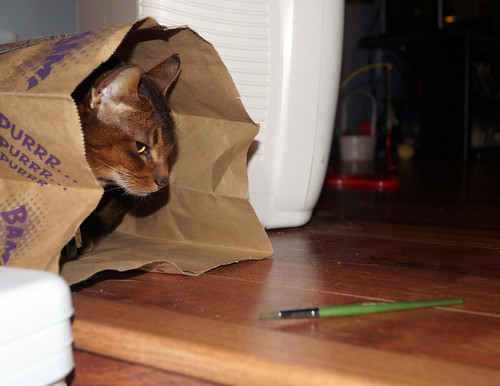 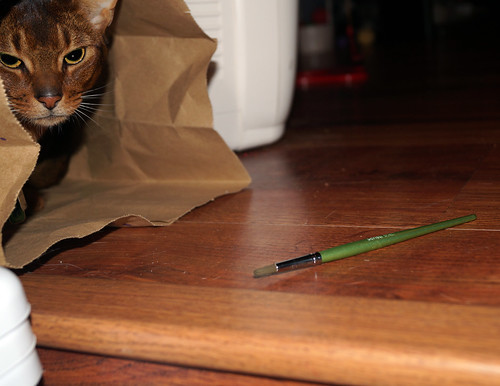 Everyone knows that Jacoby is one cool cat.

But did you ever wonder how he stays so cool?

Just hop in and get cool.

It’s also a great place to recharge his lazors.

Too cool for school!

Just before Christmas, our friend Sparkle had a Fancy Feast totebag giveaway…and we won one of them!

Since this happened over the holidays, of course I completely forgot about it. Then, today, we were notified that we’d received a package and I was mystified as to what it could be – it was like getting a mystery box in the mail! And, since it was sent directly from Purina rather than from Sparkle, I didn’t remember what it was until I actually opened it, so it was a real surprise!

Jacoby, of course, claimed it immediately. So I took him for a little ride in it. It’s just his size!

He had to show me how similar his profile is to Sparkle’s.

Jake carefully examined every inch of the bag, including the handles…

…until he heard someone in the kitchen with food and suddenly needed to be somewhere else.

Kylie, on the other hand, preferred the other side of the bag, with the face of the Fancy Feast cat printed on it.

I can’t imagine why.

Earlier this week, our friend Selina gave us an honourable mention for the “Next Big Thing” award.

According to the rules, I’m supposed to thank Selina (Thank you!), and nominate 5 other kitty blogs I think are deserving. I can’t think of just five…so I’ll table that for the moment.

However, the recipient of this award is also meant to talk about an unfinished project, and I do want to do that. I know my story of Romeo and Jacoby only got half-written during NaNoWriMo, and I haven’t forgotten it. I just need to think about it and decide where I want it to go. But rest assured, I haven’t abandoned it. It’s just simmering on my brain’s back burner.

On one of the Aby lists, Hinka Chapman shared the following quote, said to her by one of her pet owners:

“Where there is no fun, Abys will create their own fun!”

Jacoby has always had a fascination with plastic shopping bags.

He doesn’t seem to be outgrowing it, either. We have to hide bags from him because he chews the handles apart and he also gnaws holes in them, making them pretty useless for scooping the cat box (which is the reason we don’t always use more “green” shopping bags – if we did, we’d have nowhere to put the poop).

In Sunday’s post, I said I’ve hardly been away from Jacoby since he came to live with us. However, we did take a quick trip to Manhattan within a week or so of his arrival.

Even then, he didn’t want me to go!

We don’t tend to go grocery shopping often, so when we do, we buy a lot of groceries. Our building has carts for residents to use to get things up the elevator and to our units.

This, as you might expect, is very exciting to the Abys.

As soon as the cart is brought in, Jacoby and Angel are right there, ready to investigate.

Even though it’s a trolly full of bags, they know there’s food in there.

Angel’s examination is more methodical. Jake’s idea of investigation is to chew as many of the bags as he can before I catch him and make him stop.

They are such helpful cats, aren’t they? Of course, they don’t help put anything away…

He crawled in the bag and turned it into a cat fort/chew toy, and stayed in there for a very long time.

Jake’s got a thing for plastic bags, and I guess the LL Bean ones are more satisfying to bite since they are thicker and offer more resistance than plastic shopping bags do.

I can’t, however, explain why he likes licking those bags.

So, over a year later, after having his foot caught in an escalator and becoming a highly esteemed CFA show cat, do you think he’s outgrown this silly bag fetish?

I ordered something else from LL Bean a couple of months ago, and as soon as my back was turned, Jake was in the green shipping bag.

At least he didn’t lick it this time!