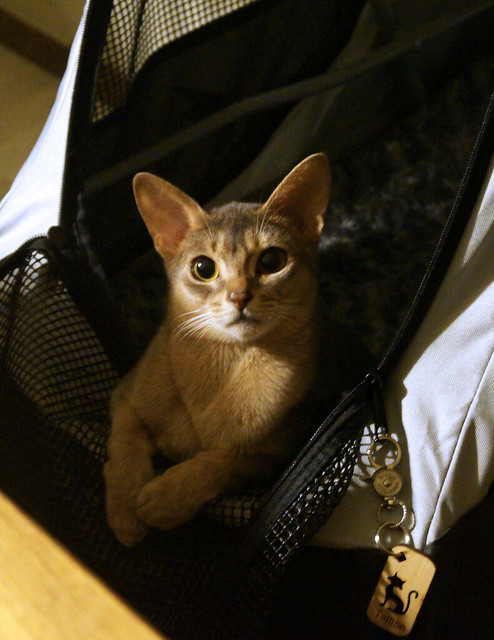 Tessie has never gotten along with Angel. 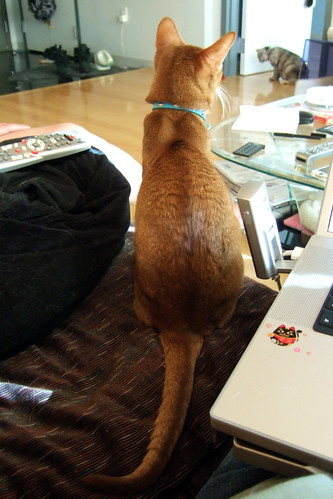 Angel arrived on the scene in October 2008. Tessie had been the oldest female cat in the house for three years at that point. 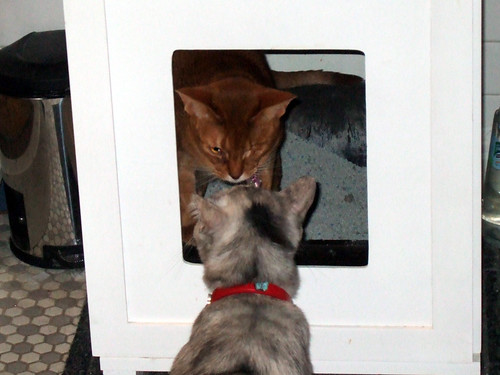 Tessie never minded the boycats, she was (and still is) very maternal towards Kylie…but for some reason, Tessie has never liked Angel. And I have no idea why. 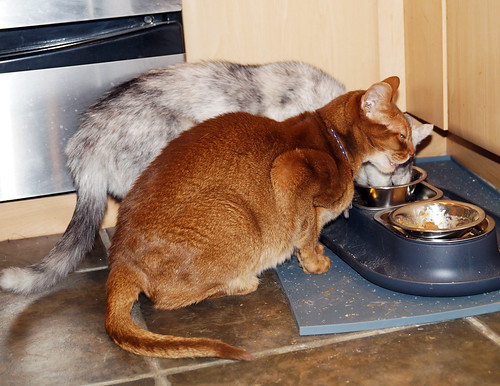 Because of Jacoby’s special dietary needs and because Kylie is a slow and incredibly picky eater, we have to feed them separately – Jake in his SturdiShelter, and Kylie in the art room. 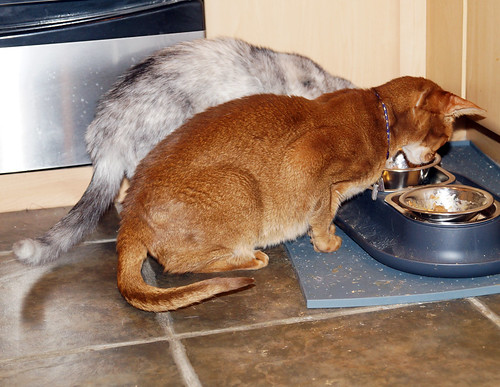 Angel and Tessie have to eat together, side by side, in the kitchen. They have the same appetites and they eat at the same speed, so they’re kind of stuck with each other. 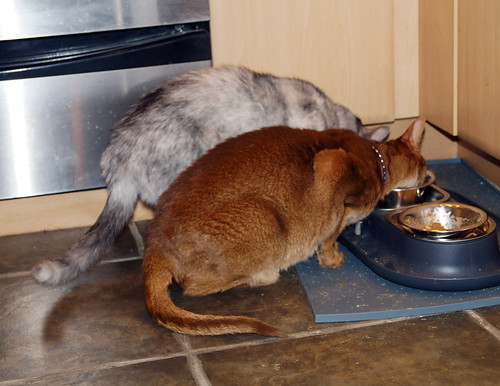 Angel will assert herself if food is involved. 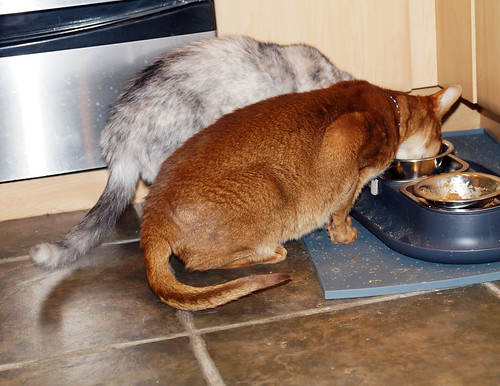 It’s the one thing that will make Angel stand up to Tessie. 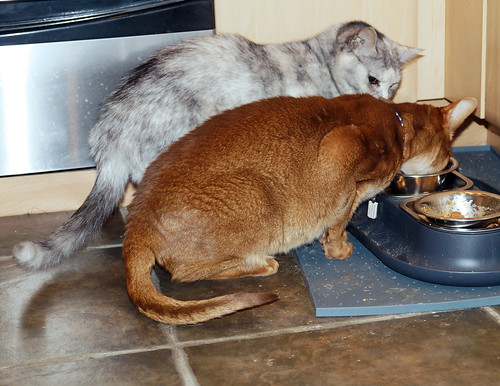 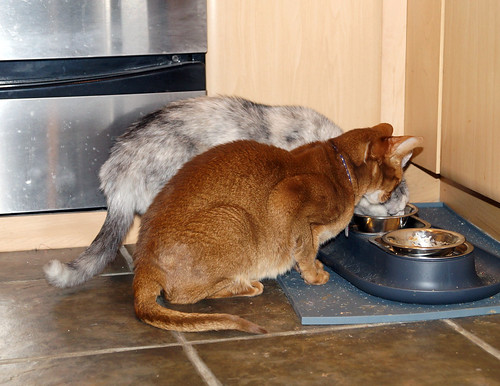 I’m not sure Tessie has seen that episode of “My Cat From Hell.” 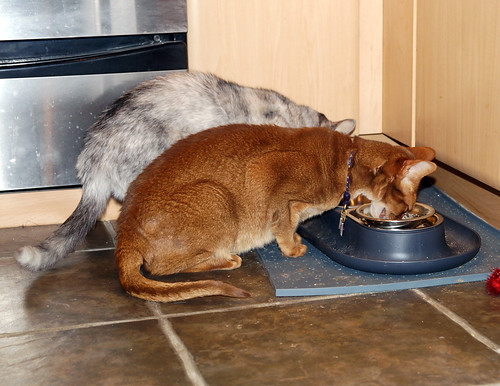 Despite that, I do think it’s been a good thing for Angel and Tessie’s relationship. 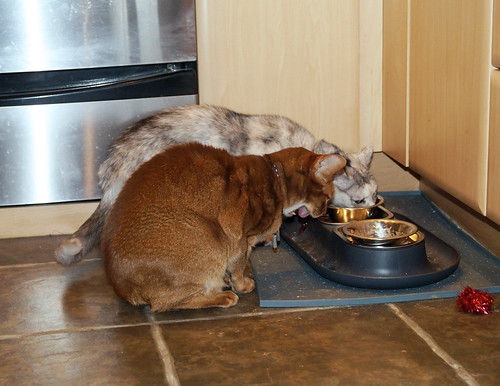 At the very least, Tessie no longer picks fights with Angel… 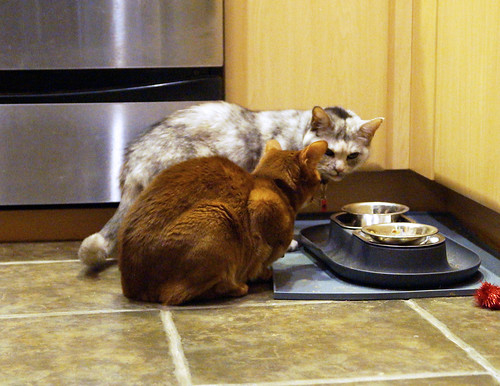 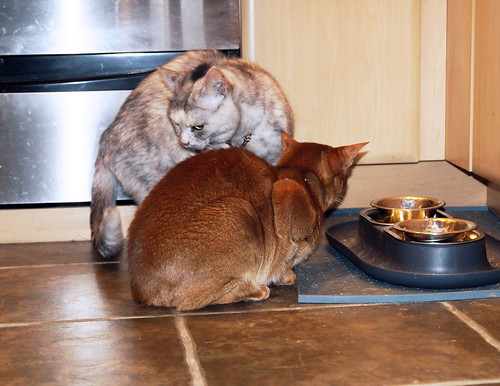 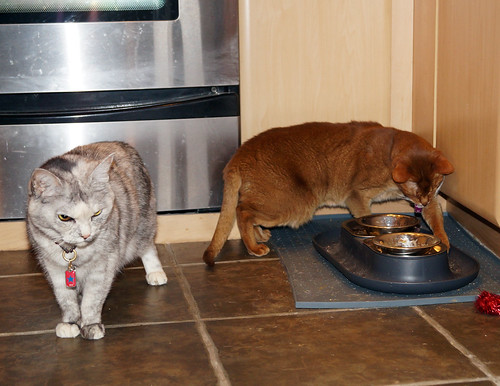 And really, it’s not entirely unfounded. 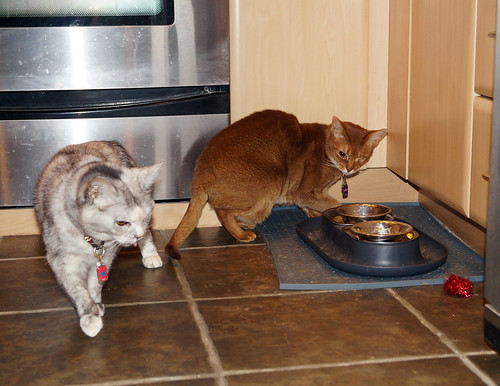 Angel keeps a watchful eye on Tessie…because Tessie will just randomly attack her without warning or provocation. Even after 7 years of living together. 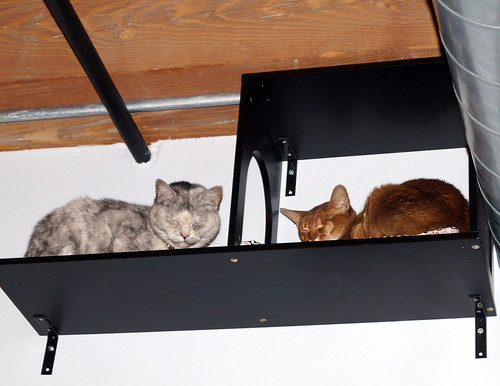 Angel can be very cuddly when she wants to be.

There are times when I’ll reach out to pet her and she almost flinches. I don’t think she was ever physically abused, and I’m careful about approaching her on her blind side (although that never seems to really bother her), so I think it’s just a part of her skittish nature.

But when she wants to, she is a purring, kneading, head-butting force of nature!

Usually, it’s while I’m eating or cutting up meat, but sometimes she comes to bed with us and demands pettings.

She even allows her belly to be rubbed, purring like a motorboat the entire time!

It’s especially sweet because Tessie is the cat who comes to bed with us every night. It’s kind of her thing. And Tessie is still, almost 4 years after Angel’s arrival, incredibly jealous of any attention paid to Angel. It borders on obsessive; she doesn’t mind if we pay attention to Jacoby or Kylie, but if we even talk to Angel, Tessie will come and smack her.

So the nights when Angel’s brave enough to challenge Tessie’s domain and purr us to sleep are very special indeed.

Really cool article on Discovery News: Cats attach to humans, and particularly women, as social partners, and it’s not just for the sake of obtaining food.

Basically, it’s another one of those studies that tells us what we already knew: Cats and humans (women especially) form social bonds and influence each other’s actions. But it tells us why, and more in depth than previous research on the matter.

But it was this point that really captured my attention: “Cats also seem to remember kindness and return the favors later. If owners comply with their feline’s wishes to interact, then the cat will often comply with the owner’s wishes at other times. The cat may also ‘have an edge in this negotiation,’ since owners are usually already motivated to establish social contact.”

Which pretty much explains why the cats that I’ve had have done things like walk on leashes and listen to me when I tell them to do something: It’s because I listen to them when they ask me to do something. How simple!

Jacoby is possibly the most sensitive and bonded cat I’ve ever known…or is it just that, after so many years of feline friendship, I’ve gotten better at reading their moods? Probably a little bit of both, but it’s interesting, and I keep thinking back to when Jake and I did our therapy team assessment, and that one observation that was made about the way we worked together, anticipating each other’s actions, like a true “team.” Now I guess I know a little bit more about how that works.

When Angel gets going, she turns into a purring and kneading machine. She gets into a zone and just goes to town.

Here she is kneading my Snuggie like a madcat.

Ever wonder what it’s like to wake up on a lazy winter weekend morning when you have two Abyssinians in your home?

Imagine all the cat toys that make the most noise possible. Now imagine two Abys playing with as many of them as they can on hardwood floors. It’s something like that.

Jacoby is a typical Abyssinian in that he has an inborn need to get as high as he possibly can. We have a computer desk with an overhead shelf that he’s recently discovered.

Of course, he had to get up there and then stretch as far as he could.

Who does he think he is, Longcat?