I make a photo family calendar for my mom every year – that’s the only gift she really wants. May’s page is a collage of various cat show photos of Izaak and Lorelai. 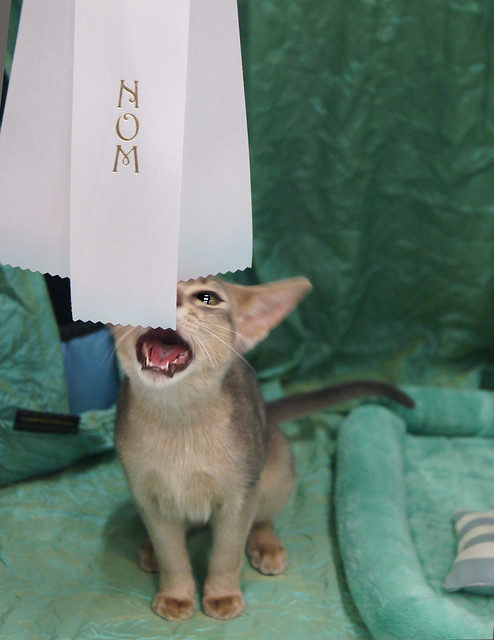 Since I am reminded every day this month of the time Rory tried to nom her NOM rosette…I thought you should, too.

Look who was on my Page-a-Day Calendar today! Luna, the lovely Somali from Belmont, MA (not too far from Boston)!

Somalis like to engage. Alert and curious, the breed’s dramatic, foxlike appearance, with big ears and bushy tails, is complimented by their zest for fun and play. And much like their Abyssinian cousins, Somalis look both elegant and untamed. They also love their people and flourish when affection is returned.

I know Summer will agree with all of this!

“Eight-month-old Khulan is just the right size for her owner’s terra-cotta saucers, which serve as a marvelous nesting place for the ruddy Abyssinian. She was named after one of the wives of Ghengis Khan, who traveled with the conqueror and held a special place in his empire – and his heart. Khulan, the cat from Wauwatosa, Wisconsin, has also won the heart of her person, Don Martinson.”

The caption says that she’s “One Cool Cat,” but I think a better title would have been “Large and in Charge.” She’s quite a round little girl, isn’t she?

My mom gave me a Cat Gallery Desk Calendar for Christmas this year, so I have twice the kitty photos to enjoy.

And look! That sure looks like an Abyssinian nose to me. Of course, it could also be a tabby, or a Singapura…what do you think? Is it an Aby?

Look! We already have our first Page-a-Day Calendar Aby for 2016!

CAT YEARS
Kittens develop rapidly and, by their first year, have almost reached adulthood, approximately equivalent to 15 human years. At the end of their second year, cats are about 24 in people years. After that, they age approximately four years for every calendar year. A 10-year-old cat is similar to a 56-year-old person. Cats generally live from 12 to 15 years; outdoor cats don’t live quite as long, usually around a decade.

But the best part about this photo of Freddie, is that he, and his human Linda, are both members of The Abyssinian Cat Club on Facebook!

Check this out – today’s Page-a-Day Cat Calendar page features a Somali on a leash!

“Like their short-haired Abyssinian cousins, Somalis are both wild-looking and elegant, sporting colors from a traditional ruddy hue to a more unusual blue, all with the characteristic ticked fur that gives them their exotic appearance. Playful and athletic, Somalis can turn anything into a jungle gym – even your drapes – but if you take them outside for some R & R, keep them on a leash or watch out! These cats can be up a tree, or out of the yard, faster than you can shout their name!”

This lovely lady is Luna, and she lives in Massachusetts – Belmont, to be exact! I wonder if this photo was taken last year during all our snow?

“Saint Francis – Eight-year-old Isis, a beautiful blue Abyssinian, loves this statue of Saint Francis, says Lucinda Korman of Sharon, Ontario, Canada. Isis will eat anywhere, but she especially likes sharing a meal with the patron saint of animals, who loved all wild creatures and sometimes would kneel among them in the forest, offering bits of his meager supper.”

People sometimes forget this, but San Francisco was named for Saint Francis…

This was a nice little surprise this morning!

I get the calendar, but I had no idea that they were going to mention Jacoby until Marty commented on last night’s post to tell me! My friend Wendy asked why they didn’t show a photo of Jake on the page, but well…I missed the deadline to enter photos this year, so that’s on me, not them. But hey, nice of them to remember!

Today’s Page-a-Day Cat Calendar page was a nice surprise – a bevy of Somalis!

“AROUND THE WORLD – Ahrensburg, Germany, is a proud town that dates back to the 13th century, and Kalahan, a Somali, is the proudest mama around, says her person, Edda Dalank. Her four kittens, ten-week-old sisters Massary and Makeda, and brothers Montoya and Matou, are beautiful, bright, and very active. It was a real challenge to get them all together for a group portrait.”

This week’s Photo Hunt subject is “Yet.” 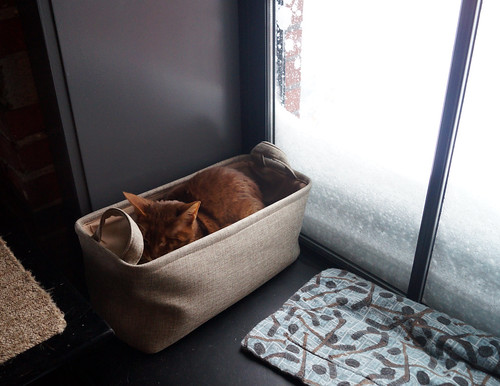 The calendar may say it’s April 11th, and Easter may have come and gone… 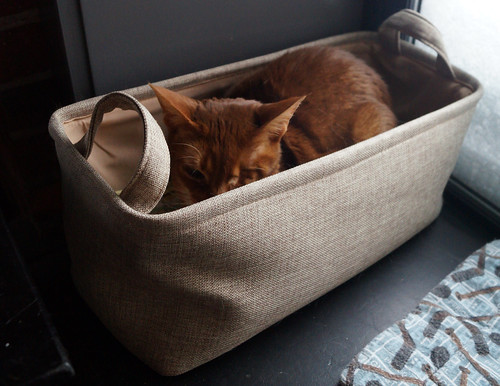 …but it snowed again in Boston this past Wednesday. 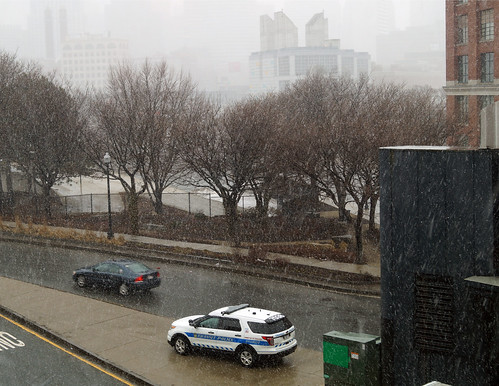 So despite what the calendar may tell you… 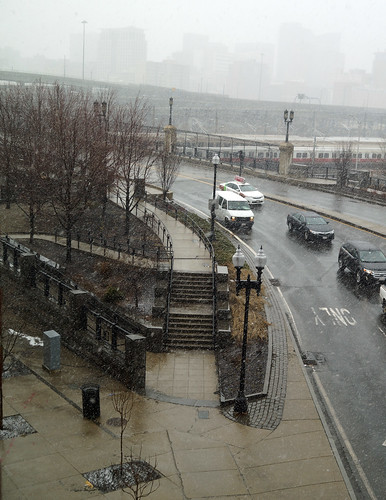 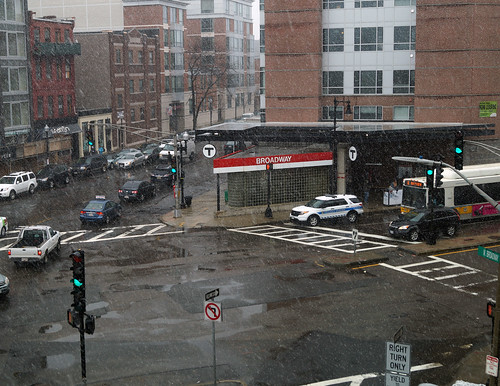 …it’s not spring yet.

I just got an email from Zazzle saying that until 11:59pm PST tonight, calendars are a whopping 65% off with the promo code “CYBERTAKETWO”

This is probably going to be their best deal on calendars this year. So, if you were thinking about buying a 2015 Daily Abyssinian Cartoon Calendar, now might be a good time to get one!

Good news! I finally got inspired and made the Daily Abyssinian 2015 calendar.

You can purchase your very own Aby-a-Day calendar on Zazzle – and right now, calendars are 50% off (until 11:59pm PST tonight) with promo code “ZAZCYBERWEEK.” After that, you can still get 15% off until the 31st with promo code “CALENDAR2015.”

Here’s a little spoiler for June. Some of the best cartoons of 2014 (and late 2013) are featured this year (except, of course, “Catatonic”), so check it out!

Look at this cute little girl!

Too bad little Jasmine ended up on a weekend page of the Workman Page-a-Day Cat Calendar…she only gets half a page to be adorable!

It’s been a good week for Abys on my calendars this week: Look at this little cutie who was on yesterday’s I Can Has Cheezburger Day-to-Day Calendar page!

I think they actually meant “Goggie” (LOLcat for “Doggie”)…but still, look at that face!

I forgot to post this yesterday, but look who was featured on the Page-a-Day Calendar for August 19!

“Abyssinians have an almost otherworldly look, which may be why one was chosen to play “Jake” in The Cat from Outer Space, a role shared by two cats named Amber and Rumple. Playful and almost doglike in their devotion to their humans, the Abyssinian has become one of the most popular breeds in the United States, despite commanding high prices at pet stores and breeders. You could argue they earn their keep: Female Abys are remarkably skillful hunters, and often stay active well into their twenties.

Again with the “doglike”..?

Interestingly, the question came up a while back on the Aby groups I’m on about which cattery bred Amber and Rumple. Carolyn Osier told this story:

“The cat originally chosen to screen test was a young ruddy male, GC Ruddy Raider of Wil-o-glen. At that time he was in the middle of a show season and doing very well, so when Disney told me they wanted to buy him and that would end his show career, I said no thank you. They wanted to own the cat so there would be no interference from anxious owners. It is my understanding that there were up to 7 cats who were used in the movie. I do not believe they came from well known catteries. I also heard rumors that several of them from one cattery died of FelV which was a problem at that time. I was very glad that I had not exposed Raider to that. Raider went on to produce wonderful offspring and I never regretted my choice, although I do enjoy the DVD of the movie from time to time and think about ‘what if’.

“FYI, a second cat also made the cut to screen test for the part, a champagne Burmese spay. I still have a copy of the Disney contract to send her for a month of screen testing. The original casting call brought about 30 different breeds. I always wondered why they didn’t choose one of the beautiful silver Persians. I will never forget the look on the face of the owner of a beautifully groomed red tabby Persian when the casting director suggested he might look very interesting if they twisted hunks of hair into spikes!”

Well, at least we know which cattery didn’t breed them!

PIANISSIMO!
Hearing is a cat’s most highly developed sense. They can hear sounds at a frequency three times higher than we can, and their ears, which are relatively large, can rotate around like a satellite dish to capture sounds more accurately. Not only do cats perceive the slightest noise, they can judge where it’s coming from. Now you know why your cat can not only hear you opening a can of food, but can tell if you are opening the specific cabinet where his food is kept.

HAHAHA…ears and food, two of the things people most associate with Abys…

I love his little cowboy hat!

…the 2014 Daily Abyssinian 2014 Cartoon Calendar is finished and ready for sale on Zazzle!

And, if you order by tomorrow (28 November) before Midnight PST (3am EST) and use the code TDAYPOSTSALE, you can save 20%! Just thought I’d give you all a heads up 🙂

Today’s Jacoby’s day in the sun…on the Page-a-Day calendar!

Jake will be seen on people’s desks all over the world today! And this is one of my favourite photos of him, too.

If you’re coming here to see Jacoby because of the calendar, then welcome!! I’ve had quite the uptick in visitors today 🙂

I got my calendars from Zazzle this week! And I have to say, I’m hugely impressed.

I honestly don’t have a favourite. They’re both awesome. Since this is the first year I’ve done regular cartoons, this is my first cartoon calendar, and I’m really happy with how it came out.

…while Jacoby seems partial to the cartoon calendar.

Personally, I love the colourful and unconventional way the date part of the calendar is presented. That’s something that Zazzle offered in the design process. I think it’s wonderful – such a nice change from the usual black-and-white grid.

I also got my #Strollercat T-shirt, and…WOW. The design turned out AMAZING. It’s bright, and whatever process they used to print it on the shirt is really nice. I can tell I’m going to be wearing this shirt a lot. But what does Jake think of his shirt..?

Best of all, Zazzle is having a huge Veterans/ Rememberance Day sale this weekend! They have incredible bargains: 50% off calendars, invitations, greeting cards, photo cards, and postcards; 40% off ornaments; 30% off mugs; 20% off T-shirts (not including screen-printed apparel); and 15% off other Zazzle products from now through November 12, 2012 at 11:59 PM PST. That’s four days to stock up on all your Daily Abyssinian needs for cheap! So check out my Zazzle store today!

If you want a photo or cartoon on something in particular, drop me a line. I can create a listing for any image on any item; it doesn’t take long at all, but I don’t know what people will find most popular. I can also set custom items up in my CafePress store and I will have a different Strollercat shirt design (and stickers and buttons!) available there soon.