Yesterday, Iris sent NEMO club members a draft of the flyer for our first post-Covid in-person show. It’s only open to exhibitors, and masks will be required unless eating or drinking. When I saw it, I knew what I had to do. 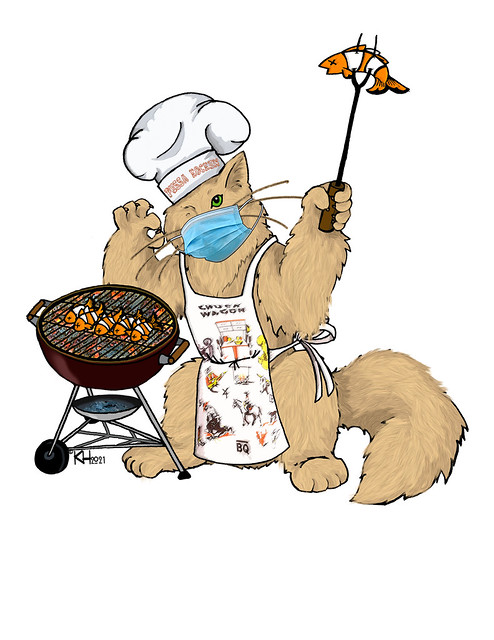 So here is the new, improved, mask-wearing Marlin doing his BBQ thing. 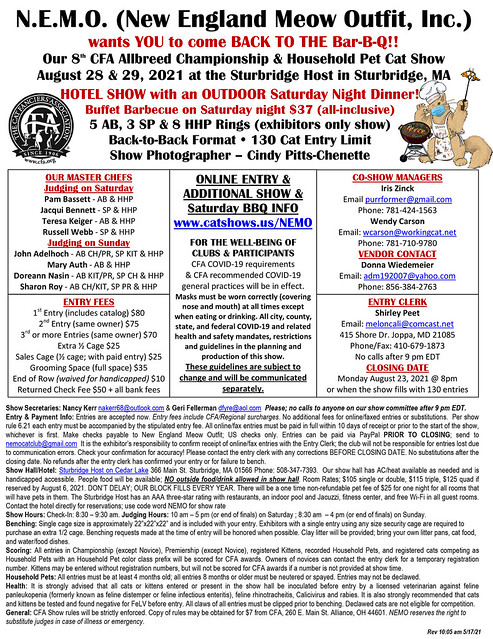 Here’s how it looks on the flyer itself. Not bad, eh? 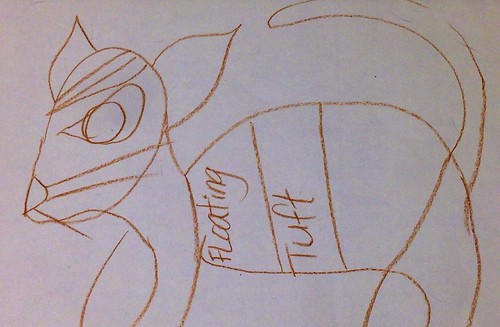 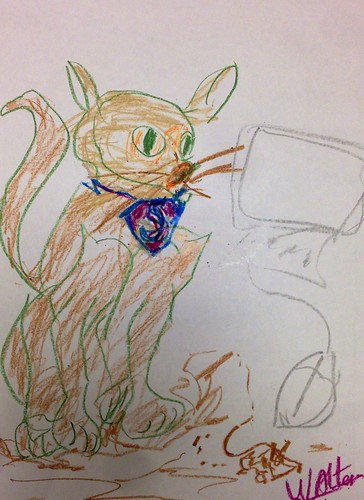 “If there were to be a universal sound depicting peace, I would surely vote for the purr” ~ Barbara L. Diamond

Here’s how you can participate in the annual blog blast for peace.

Here’s a close-up of a back foot. I used real leather for the paw pads on all four paws.

The markings were done with a white Sharpie paint pen and Copic markers in black and dark brown.

This Jake plushie is a completely DeviantArt project, inspired by Clarobell’s take on Renegar-Kitsune’s Jolteon pattern (a Jolteon is a Pokemon animal), and the ears were made using Sakutarugirly’s awesome cat ear pattern.

I wonder what they’re plotting…and should I be concerned?

I’ve actually made a few plush Abys for friends…this green-eyed version of the Jolteon Jake went to Abyfriend Bernd in Germany!

This green-eyed Fella was made for Abyfriend Paula to match her boy Bowzer. I used the pattern by IsisMasshiro on DeviantArt.

I love the pawpads on this pattern so much. They’re a LOT of work, but they are so cute when they’re done.

I used the same body pattern to make these twins for Abyfriend Amy. The head is from a commercial pattern.

They are made of Minky with marking done with Copic pens.

Jake is NOT amused with them being in his bed.

Then I got my hands on the good stuff: Real German MOHAIR, just like the classic Steiff kitty I grew up with was made from.

I was a little afraid to use such marvelous material…but it sews like an absolute dream. I used a modified commercial pattern and I want to have a second go at it because I’ve already made some more changes I want to try out. I love this little guy; he has a real classic feel to him.

This is the head pattern I used for the twins above. You can see how a pattern can vary depending on material! He is jointed, his pawpads are leather, and he has glow-in-the-dark eyes!

Better get back to sewing…Angel’s posse needs more members!

Jacoby is quite the star here in Boston… 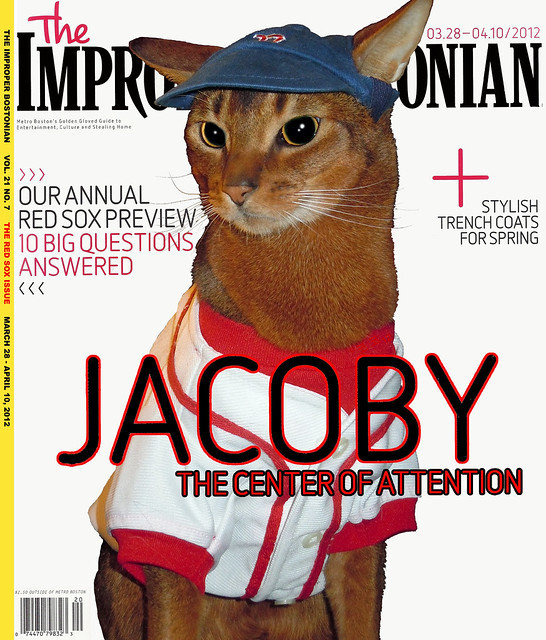 He is, after all, on the cover of the current issue of The Improper Bostonian!

Jake’s cousin Toki and his human Julie’s Etsy shop CatAtelier were featured on Moderncat this past Wednesday! So nice to see a familiar face 🙂

And, in the comments of that post, I was alerted to another fashion-forward Abyssinian on Etsy:

I don’t know her name, but isn’t she lovely? And couldn’t you just see them all at a dance?

Toki and Jake would fight over the pretty girl, wouldn’t they? Although I am told that “Toki would never wear the strawberry beret to a dance/ball! Since Jake has the elegant black tux and top hat, Toki would wear.. a deep grey suit with a silver and blue paisley cravat and midnight blue waistcoat.”

As if I didn’t have enough interests and hobbies, I have recently discovered Art Clay Silver. This marvelous technological wonder is, basically, clay, which when fired becomes fine silver! The best part is, if you use the right kind of clay, you can fire it on your gas stove.

I took endless clay handbuilding classes from the time I was 5 or 6 until I was in my teens, and then in college I did a lot of metalworking, jewellery making, silversmithing and enamelling, so to discover silver clay was something of a revelation.

The first thing I wanted to make was a three-dimensional, silver version of this photo:

Which is one of my all-time favourite shots of Jacoby and Angel. Probably an ambitious first project for someone new to the medium, but I am not the type to shrink from an artistic challenge.

Here is my “Ninja vs. Pirate” captured in silver:

…but if you look very closely, you can see Angel’s only got one eye!

I also made a silver version of this photo of Tessie and Kylie from when Kylie was about 2½ months old:

The bases are actually pieces of moose antler that I bought at a pet supply store – they’re sold as dog chews!

This isn’t technically a Hipstamatic photo, but it’s the iPad version. While we were at the Apple Store, I played with Photobooth, a built-in iPad app.

It’s pretty nifty! And Rach at the Apple Store was impressed by it, too.

I’m a huge fan of the Warriors series of books by Erin Hunter. They tell the story of several generations of feral cats living in a forest in England, and they have it all: prophecy, intrigue, war, romance, mystery…and cats!

The newest novel was released on April 5, and of course, I pre-ordered my copy from Amazon. When I got it, my first thought was, “Wow, that cat on the cover looks a lot like an Aby.” I showed it to my husband, and he agreed.

Ever since I can remember, I have sketched during lectures. I did it all through junior high, high school and college, and I do it during work meetings. I find that I can remember what was said by looking at the sketches as much as I can by reading what I’ve written.

The other day, we had a meeting at work, and among my notes was this rough drawing of Jacoby. I just had a WB Mason pad and a ballpoint pen from my credit union…but I think it looks like him.

Thank you all for your comments and friendship, and we all wish you a prosperous new year.

Jacoby waits patiently for midnight to come and for it to be Christmas.

Looking for a unique gift? Something that you know no one else will give? Thanks to digital photography, there are several companies that can help you turn your favourite photos into fantastic gifts.

Zazzle allows you to turn your photos into a variety of items, but my favourite is their photo sculptures. I haven’t found any other place that makes photos into standup cutouts for such a great price.

They do an amazing job. I sent this photo of Jake and Angel playing just to see how their statues turned out and I was very impressed. They cut out everything I didn’t want, but didn’t cut out anything I wanted to keep, and they did it all without any instruction from me.

These photosculptures are made of sturdy Plexiglas, and they can made into more than just statues. They can also be made into pins, magnets. keychains and ornaments.

They’re a lot of fun to have on your desk at work, and they’re a little more interesting than framed photos. I’ve been giving these to family and friends for birthday gifts and they are always appreciated.

Flashbags are unique bags made in Vermont from recycled newsprint and plastic. You can have your own photograph made into a durable totebag, clutch, checkbook cover, file folder or placemats.

I love their bags, which I have given as gifts using some of my catart photos. In the photo, you can see how large – and how sturdy! – these bags are (and yes, that’s a Rossi Pet Tag attached to the handle). I almost always get asked about these bags when I use them around town, and it’s nice to have something that’s not only original but also environmental.

As a relatively new blogger, I’m still figuring out ways to tell people about my blog. One thing I have done, however, is gotten cards to advertise it. I give them to people who meet Jake when we’re out and about.

The cards are also two-sided, which I love because I don’t have to sacrifice art for text. The “skinny” size (1″ x 3″) also make wonderful bookmarks.

Another marketing tool I’ve invested in is a Daily Abyssinian rubber stamp from Stamp Out Online (who also has shops on Etsy and eBay). Lisa worked with me to get the perfect font, and her stock Abyssinian design couldn’t look more like Jacoby if I’d drawn it myself!

Not sure how exactly I’m going to use this stamp…but it was too awesome not to have!

I am so proud. I sent an action photo of Jake in his fighter plane to ThinkGeek…and they posted it!