Thanks, tangentially, to the very missed Catsparella, I’ve fallen in love with Tony Moly beauty products. 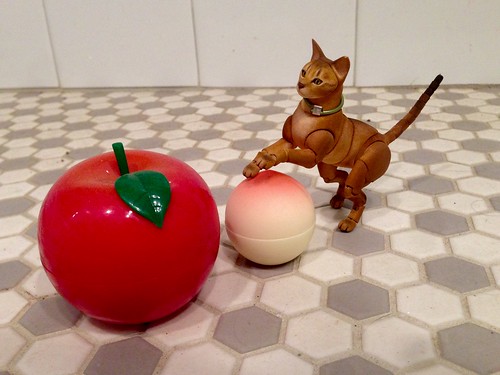 A lot of their products are packaged in cute little fruit-shaped packages. I thought it would be fun to pose the Russian ball-jointed Jacoby doll with some of my favourites. Here he is with my Apple Hand Cream and my Peach Lip Balm. 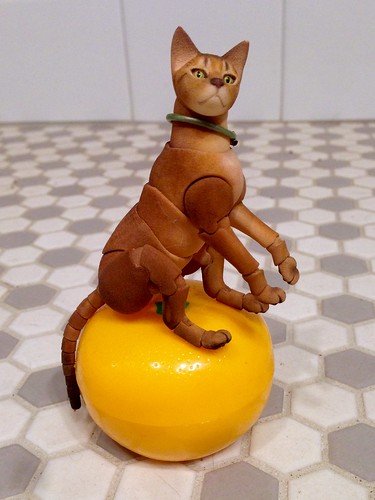 Here’s the Jake doll on my Tangerine Hand Cream. Cats may hate citrus, but…well, this is an exception.

At least, I think it’s an Aby.

Is it an Aby? I vote YES. Look at the markings around the eyes! Look at the “are you moving towards the treat cupboard?” expression on that face. Oh, yeah, that’s an Aby.

Thanks to Catsparella, just in time for Fashion Friday, I have this fashion flash:

United Bamboo, a human clothing designer in NYC, is selling cat-sized versions of their styles! You may remember United Bamboo from their wildly popular calendars, featuring cats modeling their designs…and now, your cat can own some kitty couture, too! The prices are actually reasonable, ranging from $39 to $98 (and they’re having a parka sale on Sunday from noon to six)…and you can buy identical pieces to fit yourself!

Most of the clothing is for girl cats, unfortunately, but check out their Fishtail Parka. I know a certain boycat who would look absolutely smashing in that coat…

Super sad news from Catsparella: The cat who inspired Nyan Cat has died from FIP. He was 2 years old.

He was a blue shorthair named Marty (after Marty McFly), and he took over the world. I have a Nyan Cat scarf, a T-shirt, and a very awesome camera strap featuring everyone’s favourite Pop-Tart rainbow cat

If you’ve been following my blog at all, you know FIP is my sworn enemy. It’s an evil, evil genetic disease that has no test, no vaccine, and no cure. There’s no way to really know if a cat has the “FIP gene” until they get sick. Very, very few cats survive FIP.

Jacoby’s half-brother, Gun-Hee, my first Aby, died from FIP before he was 2 years old. He was fine on June 1, looked a little peaked on June 10, went to the vet on June 20…and died on June 28. Researchers still don’t know a lot about FIP, except that it is caused by a mutation, not spread by air or shed in feces. I know it’s genetic because when Gun-Hee got sick, the cats he lived with (Kylie, age 3; Tessie, age 5; and Patrick, age 14) didn’t get so much as a sniffle…but his littermate-brother, Rusty, 1,000 miles away in New Brunswick, got sick with FIP within days of Gun-Hee. They hadn’t seen each other since they were 3 months old, but they both got the same disease in the same week.

And now Marty, aka Nyan Cat, has joined StarClan. Of course, he already has his own stars…and a rainbow, too.

Thanks to Catsparella and then Google, I have a nifty collection of cat-shaped silicone baking pans.

They’re awesome for little mini-muffins, and one of my favourite mixes is Krusteaz Cranberry Orange (trust me, this is relevant).

Making muffins in silicone pans is a little different than using stiff metal pans, but once they’re baked, you still have to let the muffins cool before you can take them out.

And here’s something you may not have known…

I guess that’s just normal, ordinary cats who hate oranges. Evidently, Jake doesn’t have a problem with them – and there is real orange peel zest in the muffin mix!

In case you were wondering, oh, yes, he did really eat some of the muffins. He would have eaten a lot more, too, if I hadn’t stopped him.

Catsparella posted an awesome article about a cat cafe in Tokyo today.

Of course, you know I’m posting this not just because it’s an awesome article, but because it has Abys in it! Pay close attention at 4:17 to see Nuts, a handsome ruddy/usual boy, vs an Exotic Shorthair, and then at 6:18 and 6:24 there’s a nice shot of Nuts’ sister, Coco (great name!), a lovely little sorrel/red girl.

Evidently, there are four Abys at this cat cafe: Be sure to also check out pretty blue Alice, and sweet little sorrel/red Komugi, who likes to ride on people’s shoulders. And, for you Somali fans, don’t miss Kanna, who likes the other cats more than the humans who visit the cafe, Ru~u, who “looks like a fox,” and Rin, a pretty “phone” (I think they mean fawn).

Catsparella says that one of her biggest regrets about her 2010 trip to Japan is that she didn’t get a chance to visit a cat cafe in Tokyo. I went to Tokyo in 2006, just before cat cafes started appearing (I think they started popping up in 2007), so I didn’t get to go to one, either, but I did make an express point of going to Pecos PetCity in VenusFort mall at Odaiba. That was an experience! They actually had two adorable ruddy/usual Aby kittens for sale in the shop! My biggest Tokyo regret was not being brave enough to take any photos inside the pet store. I wish I had photos of those two little Abys.

(I did buy our kitties presents from there…collars made out of kimono fabric and little catnip kitties. One of the collars was for my kitten-to-be, Gun-Hee…but when he finally grew into it, he practically chewed it in two within a day of me putting it on him)

Great post, Catsparella…now I really want to go to Japan and Korea again…

I know this is a blog about Abyssinians, but I saw the story of Stewie (Mymains Stewart Gilligan) the Maine Coon. He’s the Guinness World’s Record-holding Longest Cat in the World, measuring 48.5″ – just over 4 feet! – from nose to tail-tip. Most cats are about 18″ long; Jacoby is a pretty long and tall cat, but he’s only about 32″ long*, a piker compared to Stewie! On Stewie’s blog, there are photos of him and his human, Robin Hendrickson…look at the one where he’s not stretched out, but just sitting there with her standing behind him with her arms around him. WOW.

But what actually caught my attention isn’t that Stewie is the world’s official Longcat, but he’s also a show cat (he was actually just at a TICA show at Cal Expo in Sacramento, CA, where I used to go to cat shows when I was a teen) and a therapy cat! There aren’t many cats who are both show cats and therapy cats.

I really like this one thing that Robin told Catsparella: “Stewie visits local hospitals and rest homes and brightens the patients’ day. I hope to get him into the schools to work with special needs kids,” because that’s exactly what I want to do with Jake some day.

Jake probably won’t ever hold a world’s record (unless it’s for heaviest Abyssinian!), but it’s fascinating to know that there’s another cat out there who does both cat shows and therapy work.

*I say about 32″…I have an awesome string measure…but Jake’s really squirmy, and even with my husband’s help, I’m still not sure. So I took my best out of three.

One of my new favourite blogs, Catsparella, posted today about Google’s anti-cat policy. She quotes a bit from Google’s Corporate Code of Conduct, to whit:

Google’s affection for our canine friends is an integral facet of our corporate culture. We like cats, but we’re a dog company, so as a general rule we feel cats visiting our offices would be fairly stressed out. For more on this, see our Dog Policy.

Wow, Google, really? REALLY? I’m not going to go all crazy cat woman and point out how that passage would have read in past eras of American history, with different nouns in place of “Cat” and “Dog” in that sentence, and how discriminatory that is, but…seriously? Is that something you really want to have said?

Cats are a more popular pet in this country than dogs, Google. You are a public company. You may want to rethink your “Dog Policy.” Not to mention, it’s a well-known fact that the internet loves cats (just Google it!)…are you sure you want to step on its tail?

(And I’m not even going to say how much Jacoby would enjoy visiting Google’s offices and how much he would not be stressed out by Google, its offices or its dogs, either.)

Jacoby actually scooped Maru on that one, as all you Aby Friends know. Jake wears his raincoat all the time when it’s rainy outside!

Maybe someday Jake will be as famous as Maru…