My friend Marsha posted a photo of a reproduction cigarette card featuring an Abyssinian the other day on Facebook. I actually managed to find an image of it in the digital collection of the New York Public Library!

Cigarette cards were the precursor to collectible cards in bubble gum packets, and date back the 1890s, when cigarettes were wrapped in paper packets instead of boxes. Manufacturers began inserting pieces of card to protect the contents, quickly realising that these would be useful for advertising their products. Soon this evolved into sets of cards featuring various things of interest, in the hopes that smokers would want to “collect them all” and continue to buy that brand rather than another.

Usually, they were marketed to men, and so featured sports players, pretty actresses, trains and ships…but there were some animal-themed sets as well, including a 24-card set of different British breeds of cats printed in 1936 by Player’s Cigarettes.

The originals are not dated, but these were reproduced in both 1986 (with blue ink and the Imperial Tobacco Ltd. logo on the corners)…

…and in 1997 (this time with red ink). Therefore they are not hard at all to find, especially from UK sellers on eBay. I got this one for about 80kr (less than $10 USD) including shipping.

I have had this little pewter cat figurine since the 1980’s. 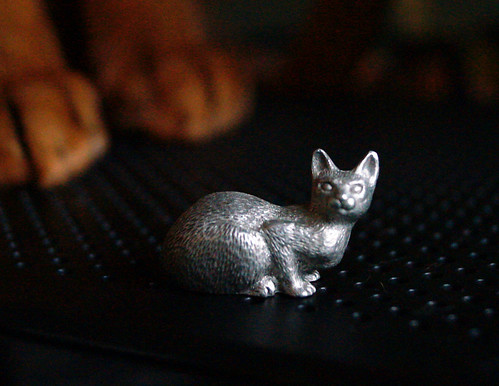 Somehow, despite moving several times (to several different cities in three states and one province), I’ve managed not to lose it. 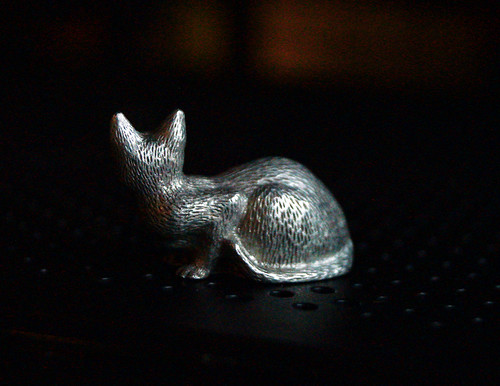 I’ve always thought that it looked like an Abyssinian. I don’t know why I looked at it and thought “Aby” rather than any other sort of cat, but I always have. Maybe it’s the way the fur is so detailed; it does remind me of an Aby’s ticking. 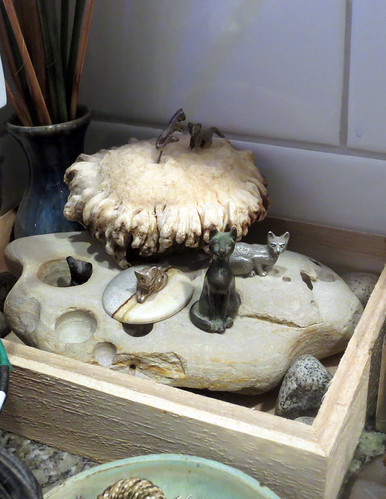 You may remember seeing it before in this post from last October. 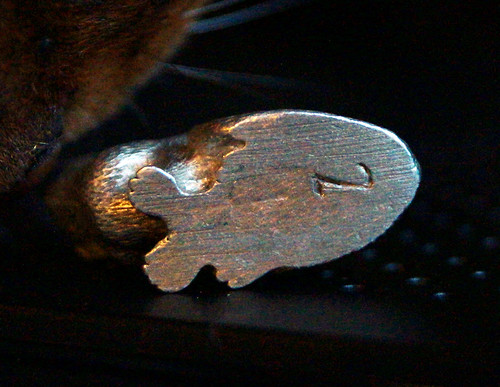 It has no markings on it at all. I just know I got it in the 80’s because that’s when I was first interested in Abys, and it’s also when I was collecting little pewter figurines. This is one of the only ones I can still find. 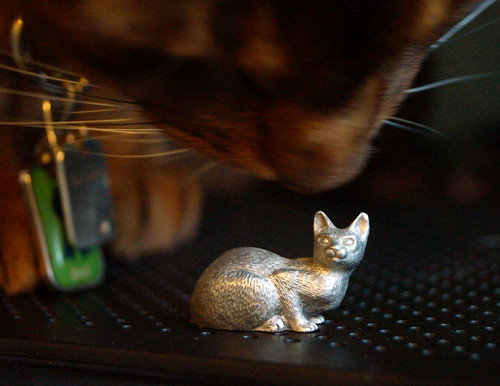 Last week I happened to be looking for something on eBay and I came across a listing for a pewter Abyssinian figurine. 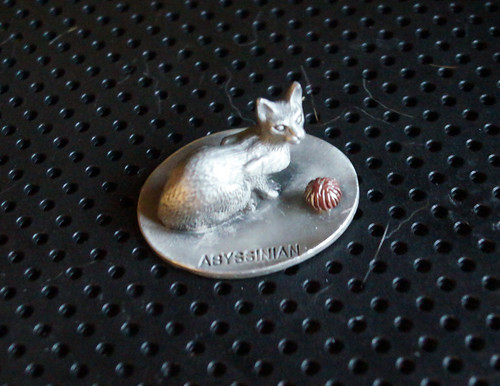 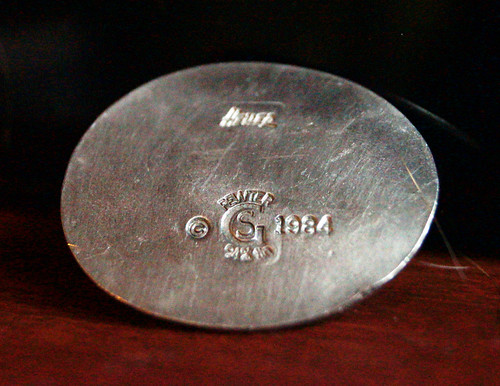 This figure was on a base with “Abyssinian” stamped on it. There were also stampings on the base showing a manufacturer, a copyright, and a year – 1984. 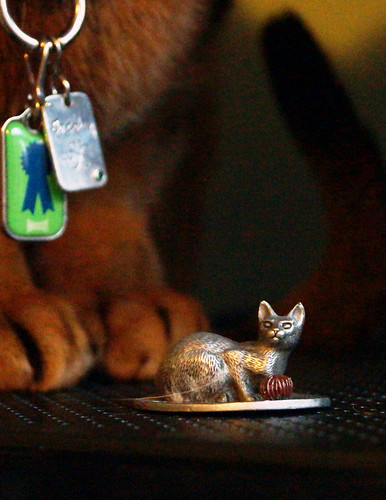 The cat here is playing with a little ball of yarn – but the cat is very familiar! 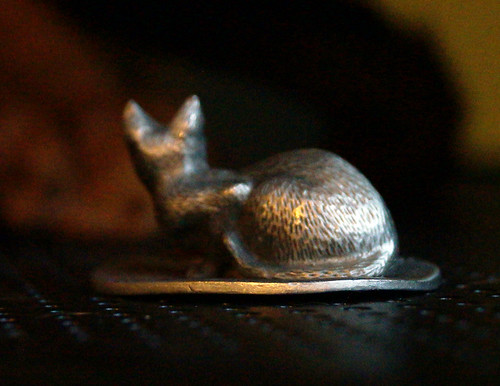 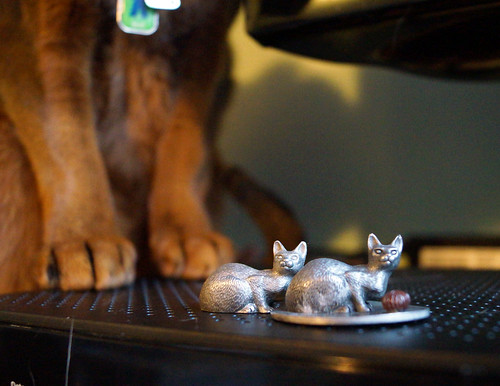 I was so psyched! After 30 years…I’m finally sure that my little pewter cat really is an Abyssinian! 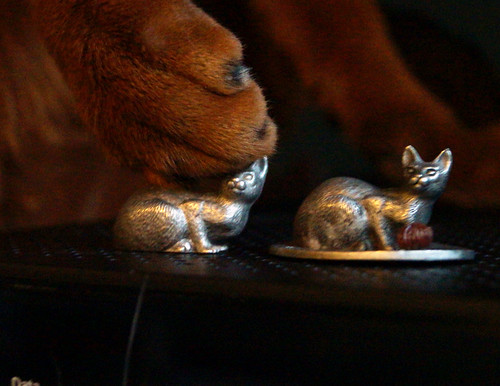 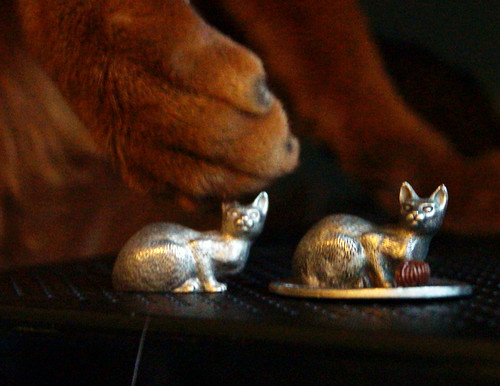 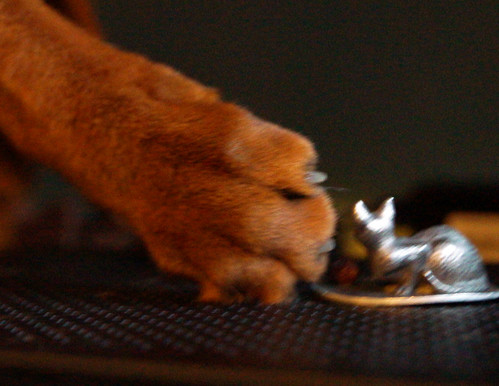 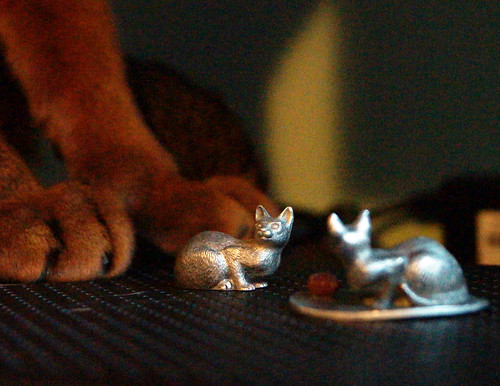 You may have noticed that I had a little Abyssinian assistance while taking photos for this post. 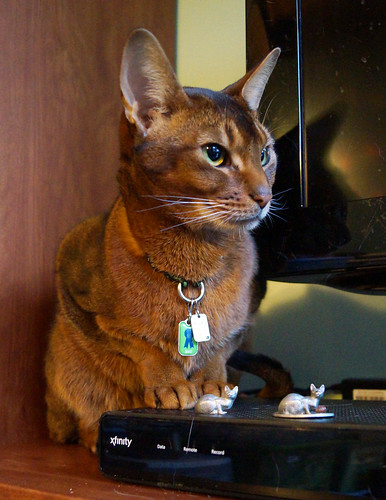 Jacoby was almost as excited as I was about the little pewter Aby. 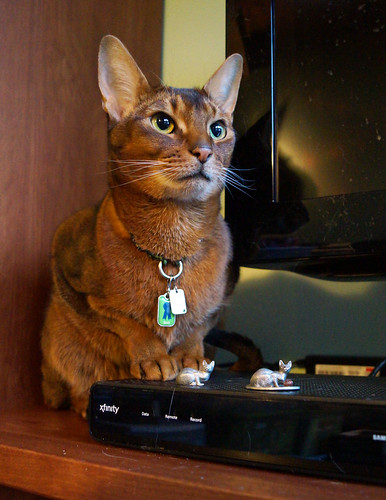 Although I suspect it was for an entirely different reason. He is such a helpful boy!

Since 1988, the Pobjoy Mint on the Isle of Man has issued a special cat crown coin. The debut release, of course, depicted the country’s own Manx cat. Subsequent years featured other popular cat breeds including the Persian (1989), the Siamese (1992), and the Scottish Fold (2000).

Well, finally the Aby’s turn has come! The 2010 Isle of Man annual issue spotlights the Abyssinian.

On one hand, my gut reaction is “well, damn, it’s about time!” I mean, the Aby is only one of the oldest recognised cat breeds, and it takes them 23 years to make their coin? But on the other hand, I have to say it’s perfect timing, especially for me! The year I start an “Aby-a-Day” project is the year the Pobjoy strikes Aby coins? Kismet!

I have a (very small) gold Siamese coin I got in 1992 when I had my Seal Point Harri. I don’t know if I can afford an Aby coin…but it would be a great investment. Apart from the value of the gold, these cat coins are insanely popular and do nothing but appreciate.

I’m also quite impressed with the Mint’s coloured coins. They started issuing coloured versions in the mid-2000’s (I think the first was the Tonkinese coins in 2004), and they’re quite well done. The detail and the shading on the Aby cat and kitten on this year’s coin is impressive.