Jacoby has developed a new habit. 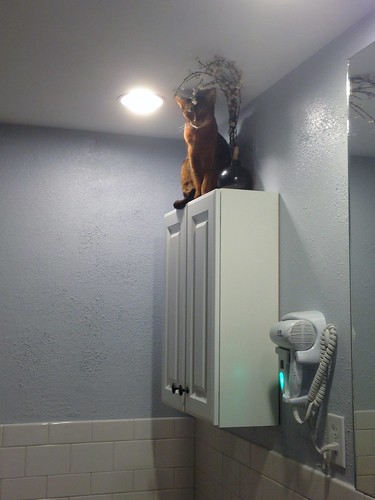 He likes to sit on top of the cabinet in the front bathroom and oversee people going about their bathroom business. 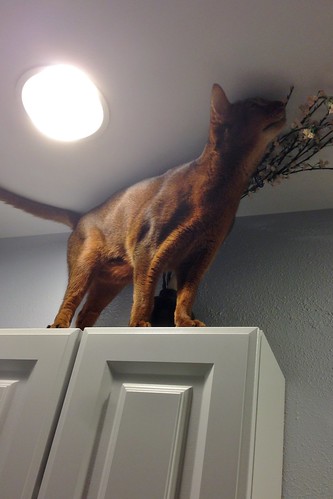 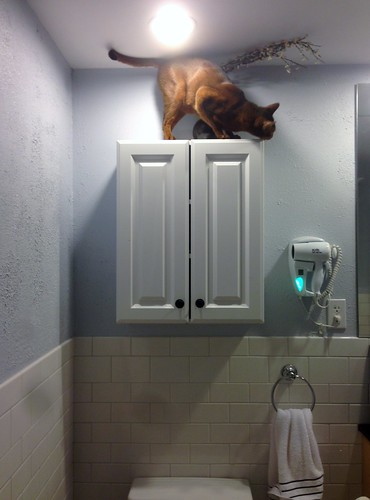 As you can see, he’s quite proud of his achievement. 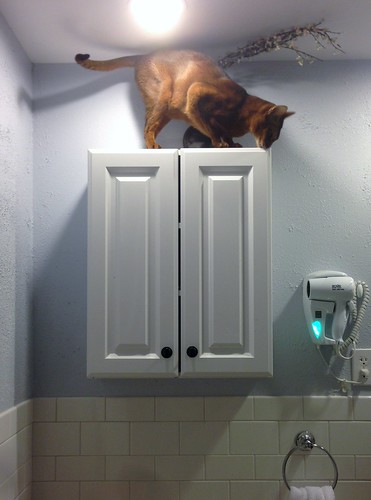 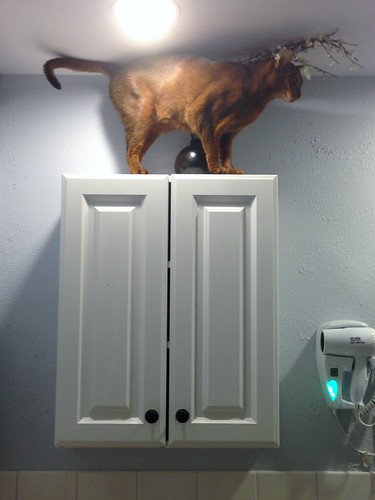 I’m not sure why he likes it up there so much. He’s quite tall, and there’s not enough room for him to stand comfortably. 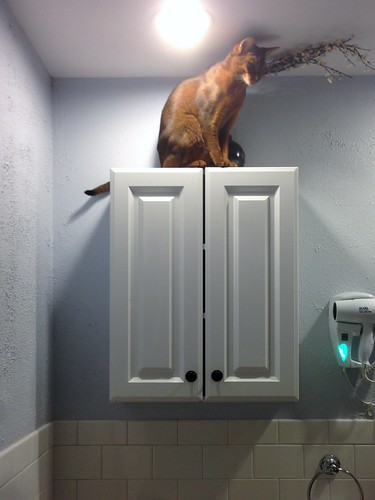 He can’t really sit up, either. 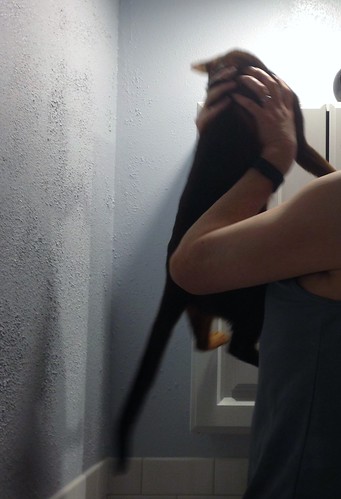 Come on down from there, Jakey-boy. 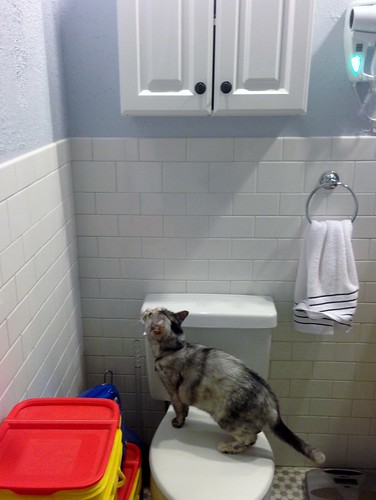 Of course, now Tessie wants to try to get up there, too.

It’s amazing how much press some kitties can generate!

There are a few different features on Boston.com, including a truly magnificent photo of Jacoby onstage taken by Boston Globe photographer Kayana Szymczak (which was also in the actual printed newspaper today). They did a preview article (and an interview with yours truly), a nice slideshow of the entire event as well as an analysis of cat videos.

The Boston Dig is also featuring a Fotobom of the day, which can also be seen on Flickr!

Then there was a great story and video by the Somerville Patch on the Copy Cat Festival yesterday – be sure to check out their slideshow, too!

I especially love this one the reporter, Sara Jacobi (no relation) took of Jacoby and me talking with Rachel Strutt from the Somerville Arts Council.

It was a long day for Jake – we were there eight hours, from noon til 8pm – but he handled it like a champ. We did take a little break at one point; Jake decided he needed to get away from his adoring public and took a little tour behind the curtains.

Jake wasn’t the only cat at the festival, though. This little black and white girl, Krufka, sat patiently on her own little sofa while her human read a story about her.

And as I mentioned on Sunday, Famous Seamus was also in attendance. He was such a sweet cat. And as his human said, he was twice the size of Jake! Jake’s such a big Aby…it was nice for someone to call him “small” for a change.

I also got to meet local author Clea Simon, which was awesome; I haven’t met many authors of books I’ve read! Her book The Feline Mystique is a fascinating study of the ancient relationship between women and cats. She also writes feline mysteries!

And we met Case and Emily, the creative geniuses behind Ferocious Friends cat toys…now, these things might just give Neko Flies a run for its money! Check out their video if you don’t believe me!

I also have to mention my favourite local video – this song by aspiring local singer-songwriter Kevin Choi! Not only is Kevin super-talented, but he’s a total cat person.

I read somewhere that cat people don’t really have the social outlets that dog people do, like dog parks. That’s what made the Copy Cat Festival so magical: it was a gathering of creative, artistic cat people, drawn out of their studios, workshops and computer screens, united by a common passion. I hope it becomes an annual affair – you know Jake and I will be there!

The Copy Cat Festival this weekend was kind of magical, in that it was essentially a room full of crazy cat people who were not trying to hide that fact. People were wearing cat ears and whiskers and some even painted whiskers on their faces.

I can only imagine what Jacoby thought about that.

At one point during the Copy Cat Festival yesterday, Jake decided he wanted to go upstairs to the balcony to watch the videos.

Once we got up there, he took a chair and made himself comfortable.

It was really cute. He stayed there til the end of the international cat video section.

The Somerville Copy Cat Festival is the day after tomorrow (!), and Jacoby is fast becoming Boston’s most famous feline citizen.

Boston may be a big city…but in many ways, it’s a small town.

Jake’s also making a bit of a splash in the CFA; the show season runs from May 1 to April 30, and somehow Jake’s managed to squeak his way into the top 10 Abyssinians in Premiership…

Isn’t that exciting! He’s also one of the top 40 cats in Premiership in the North-Atlantic Region…we haven’t been to that many shows this season, but apparently he’s done better that I thought! I’m just happy to make one final in every show we enter.

But my favourite thing about Jake’s fame is this little catnip candy box made by our friend Mycrobe. The Abyssinian candy was inspired by Jake!

I think it’s Jake’s favourite thing about being famous, too.