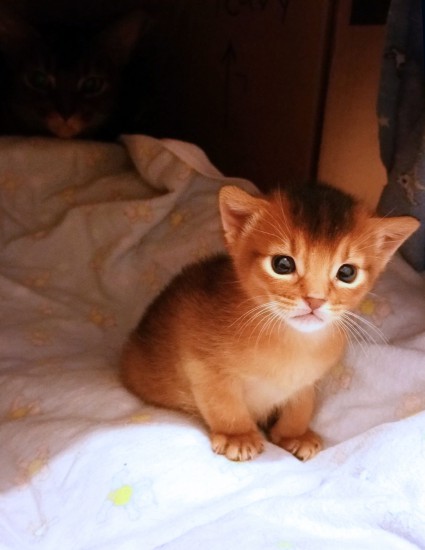 I just don’t even know what to do with that. So here’s a photo of Jacoby’s 19 day old nephew (his brother Dillin’s son) with his mother Georgie that Sherry posted on the Pellburn Abys Facebook page. Because…to get kittens, it takes two to tango? I have no idea.

I can’t read all of the trophy, but I can see that it was awarded by the Canadian Cat Association to the Best Abyssinian. Now, when I did a Google search, I found Jacoby’s brother Dillin showing as the best Abyssinian for the 2014-15 season! Holy cow! I had no idea. Now, I don’t think that the Aby in this photo is Dillin (mainly because the Reddit user says it’s their aunt’s Aby)…but does anyone know who it is?

Jacoby’s littermate brother, GC Pellburn Johnny Dillinger, was featured on the Halifax 6 o’clock news last Sunday. It was actually a story on the Fundy Fanciers CCA show, and it also features Nofuratu the Nakedcat, a Sphynx friend of ours.

It’s always so much fun to see pictures of Dillin…after all, he is Jake’s closest relative. I wonder if they would remember each other if we could reunite them?

I hope Sherry is doing okay in this time of sadness.

Four years ago Sunday, a little force of nature was born.

(I wonder which one he is?)

He was a handful right from the start!

He had a brother and sister and, apparently, an innate understanding of how to pose for a camera.

Sometimes I wonder if he misses his littermates.

They were really close.

He was the first of his litter to discover catnip!

He was always going to be my kitten. Sherry (who took all of the above photos and sent them to me before Jake came to live with us) must have told him so every day.

Because as soon as he met me, he decided I was his human, too.

Hinka Chapman posted some awesome news on Facebook the other day…

Eszencia Dylan has achieved the title of Supreme Master Grand Premiere, the highest scoring achievement in the Canadian Cat Association!

Dylan is Jacoby’s littermate-brother Dillin (Pellburn Johnny Dillinger)’s son, and Jacoby’s nephew. It seems like all the boycats in their family are all destined for greatness.

One of Jacoby’s Halloween costumes was a Red Sox uniform, in honour of his namesake, Red Sox centerfielder Jacoby Ellsbury.

Well, he wasn’t the only one to dress as the human he was named after! Jake’s brother Dillin (Pellburn Johnny Dillinger) dressed as himself, too, complete with tommy gun and moll (his human, Sherry).

Sherry writes: I brought Dillin to CCA’s Halloween Cat Show in Halifax this past weekend. Although Dillin made every final, he didn’t get in the top 3 for the day, but his son Dylan did in the Premiership class!

She adds: There’s also a nice picture of Dillin with judge Roger Boisselle who was wearing a very cool costume.

Doesn’t he look spectacular? I see he poses on the judge’s table just like his brother does! He and Jake are littermates as well as brothers; their litter was Jake, Dillin and their sister Scarlett. They also have an older brother (same parents, different litter), Buddy Guy, who we saw dressed as Buddy Guy last Halloween.

Can you see the family resemblance?

Oh, and speaking of fashion…I made some #Strollercat T-shirts on Zazzle if anyone’s interested…