In one of my Facebook Singapura groups, someone recently posted this cartoon of Picky Chicken, the famous Singapura wearing a dishtowel.

Turns out the artist, TactoonCAT, has an Instagram account and draws cartoons based on well-known internet cats. They’re amazing, you should check them out! 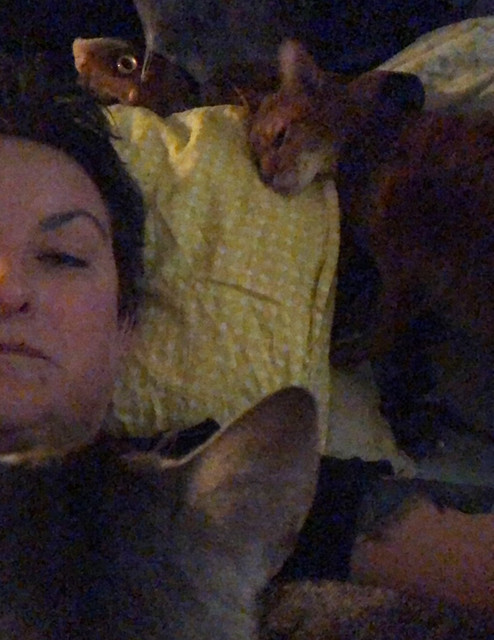 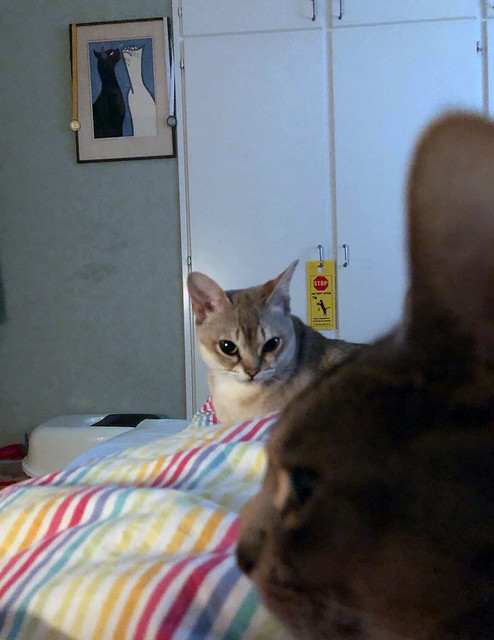 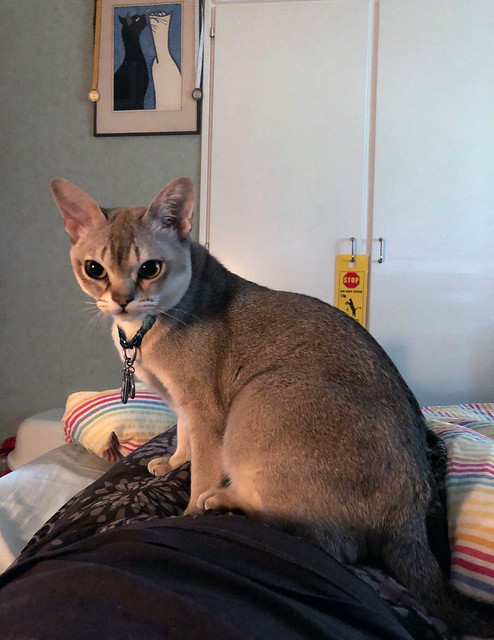 Last week, I did some sketches of Izaak in the style of Pixie from the webcomic Pixie and Brutus. There is one particular cartoon that really inspired me to do a Singapura Stinkeye PixieZak. So…here it is.

I tried to do this entirely in Procreate on my iPad Pro, but I had to do a couple of things in Photoshop after I had finished. One, Björn thought Zak’s eye was too big, so I made it a little smaller…and two, I could not, for the life of me, figure out how to paste my signature into the drawing on Procreate.

However, whilst Procreate may be lacking in layer-pasting abilities, it does have a very nifty feature: it records your drawing, which you can then export as a video! So…here is me drawing Zak as Pixie.

Recently a new cartoon has appeared on the internet: Pixie and Brutus, about a tiny kitten and a retired military war dog. Now, I know Pixie has stripes on his back…but other than that, he looks and, more importantly, ACTS just like a Singapura.

I know my sketch is a bit disproportionate…but I imagine this is what the Maine Coons felt when they first met a Singapura…inspired a bit by Pixie and Brutus.

In honour of International Cat Day, a representative of Arlanda International asked me if they could use this photo I took of Jacoby and Angel in their crate just when we arrived in Sweden two years ago. So today Jake is featured on their Facebook page and on their Instagram account! Be sure to like him!

One of my favourite time-wasters, Bored Panda, posted a hilarious video of a Japanese Singapura named Malt dragging his favourite toy around the house. This just shows how “small but mighty” Singas are.

You can see more photos of Malt on his Instagram page.

The other day, my friend Ailsa, who own Greenman Pet Services in San Jose, CA, posted a selfie of herseld with one of her clients.

This is Gus the Abyssinian…isn’t he handsome?

This is so sad and so unfair. I cried out when I read this on Catsparella today, but Wasabi-Chan, the cutest kitten in the world joined StarClan much too soon today at 6:30pm Tokyo time.

Apparently she was recovering from her crow attack, and also had epilepsy, which her human was treating. But she was taken to the vet this morning and treated in the ICU, but lost her fight. They don’t know what the actual cause of death is yet, but it was much, much too soon. She was only 3 months old. She didn’t even get to be a ‘paw…

I know she probably wasn’t really an Aby…but she certainly looks like one. My heart is with the Thousand – again – because another friend stopped running today.

Huge thanks to Catsparella for her post today about Wasabi-Chan aka “The cutest kitten in the world.”

Poor little Wasabi-Chan was rescued from the streets in Japan after a savage attack by a mob of crows that left her with severe injuries including a fractured jaw, a hole in her throat, and injuries to her tongue and gums. Her recuperation is documented here (in Japanese but Google Chrome will sort of translate it for you). As part of her recovery, the kitten had to be fed with a tube, which she hated…which lead to this:

Yes, it’s a little kitten straightjacket in the shape of enoki mushrooms! If her little face and ticked fur didn’t already scream “Abyssinian” to you, her patient wearing of silly outfits should prove she’s at least part Aby!

Wasabi-chan is only about a month or two old, judging by the photos; she was rescued on June 2nd. So I’m sure there will be much more Wasabi to come! You can follow her on Instagram and Twitter.